- January 24, 2019
I had planned on being in Ao Nang for one night and moving on to Railay Beach area. One night turned into two as I met some great people and had a lot of fun checking out Ao Nang. I walked the beach, checked out the shops, the food courts, and at night, checked out the bars. There was a wide variety of bars – everything from beach bars to street bars to fancy bars to Ladyboy bars. It was quite the mix of bars and quite the mix of people. We went down one side street that looked like it had quite a bit of nightlife going on – and half way through what I thought was going be a bunch of dive bars with live music, I realized it was basically a ladyboy street of bars. I don’t know why, but ladyboys always come up to me first… never mind the 4 guys I was with. A couple of them were a bit shy and I don’t remember how it happened but one of the guys pointed out a ‘muscular' looking ladyboy and dared another guy to take a picture with her. He wouldn’t, so naturally, I made my way over and had pictures with her. 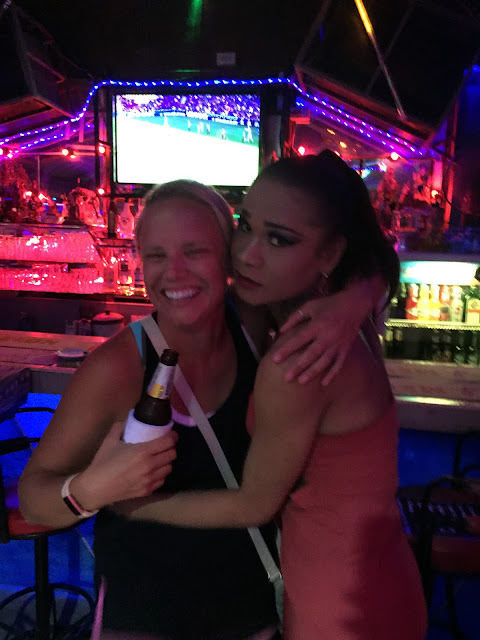 It was quite entertaining to see the reactions. I never realized just how much culture MN has regarding drag shows and such. On any given day, there is a drag show, drag bingo, drag karaoke to be found. I guess it doesn’t phase me. But seeing the reactions of those from other countries leads me to believe that the US is a bit more progressive (or whatever the word is) in this department. Or maybe I just have a totally open mind. Either or. People can express themselves however they wish - it doesn't affect me - kudos to those willing to be real vs hide from society. Just things I never think about!