- January 23, 2019
Ao Nang to Railay Beach, Krabi~
Me and a couple of the guys from the hostel decided to grab a long tail boat and head to Railay Beach, Krabi - a day trip for a hike to the viewpoint and a peek at the penis cave (also known as some other name, but let's be real, no one knows what that is!). 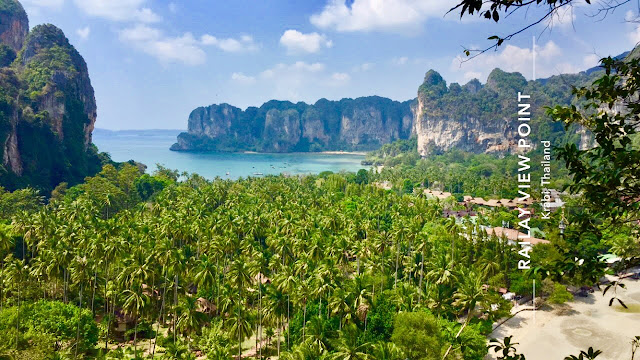 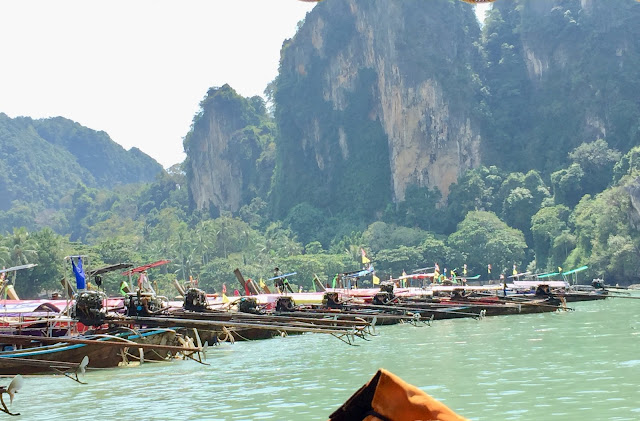 The motors of the longtail boats - always amazes me how different things are! 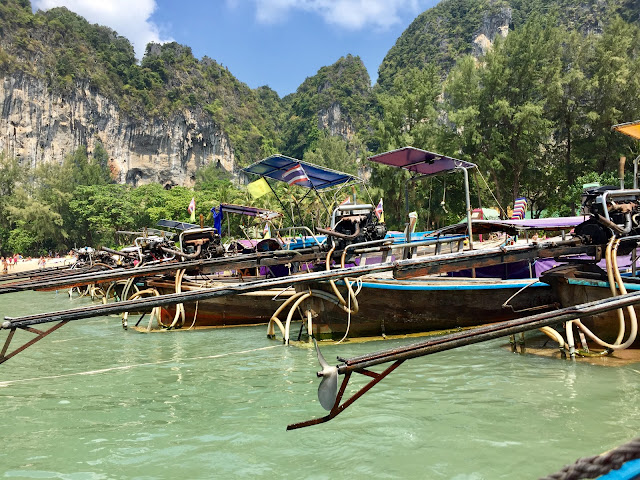 We arrived at Railay Beach and headed to the viewpoint trail -  (which was a bit of an effort as well as a 3 out of 4 guess on who guided us in the right direction). The paved trail itself was quite interesting - saw a ginormous iguana/lizard and the trail went under the cave hangings (I am sure there is a technical term, but that is good enough to get the idea!) 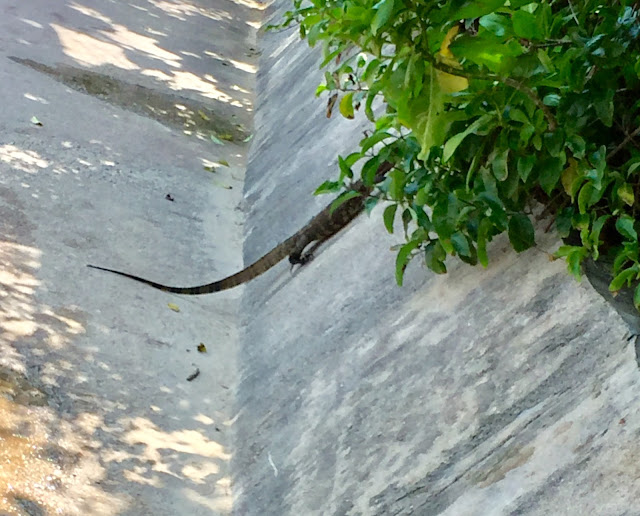 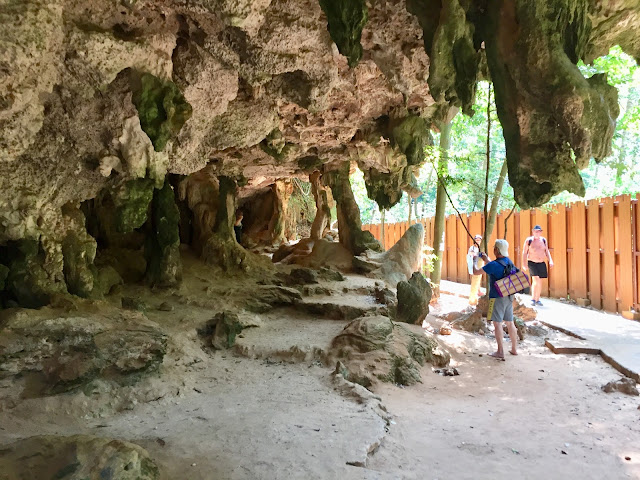 As soon as we saw the trailhead, I cant speak for the other guys, but I was excited!  I was wearing flip flops - like the cheapo $1 pair from Walmart - because my feet were in a bit of pain from rock climbing the day prior. The trail head sign had all sorts of warnings... pretty sure one was meant to be 'don't climb this in flip flops, you idiot'. Not one to take said warning signs too seriously, I immediately acclaimed that I would be doing this trail. 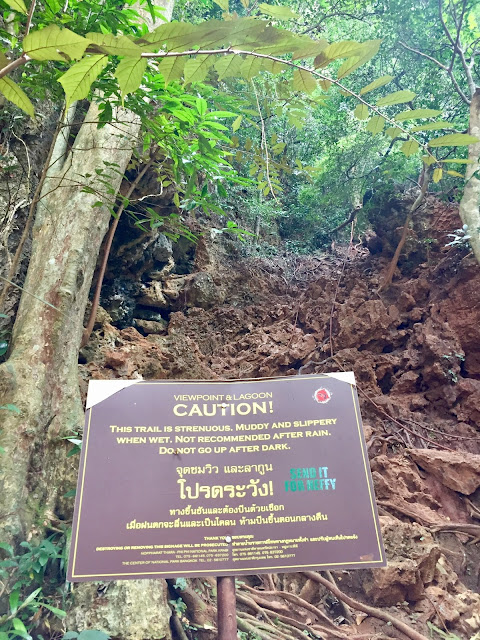 One of the guys was not convinced and said he would meet up at the bar afterwards, the other guy was game to try. The first 10 feet of the trail were straight up into the air - with a built in rope to grab for your safety. 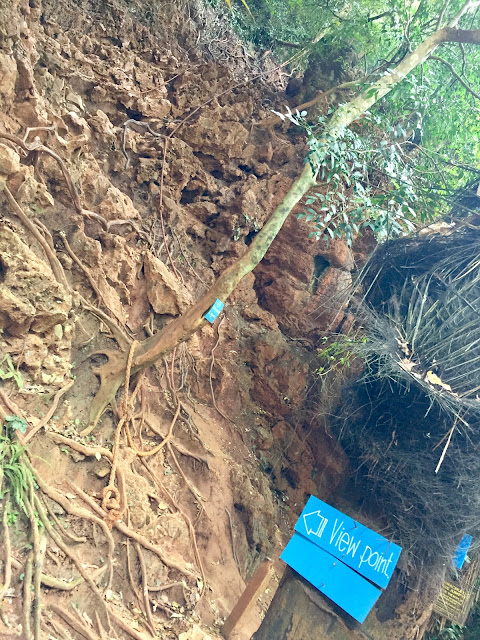 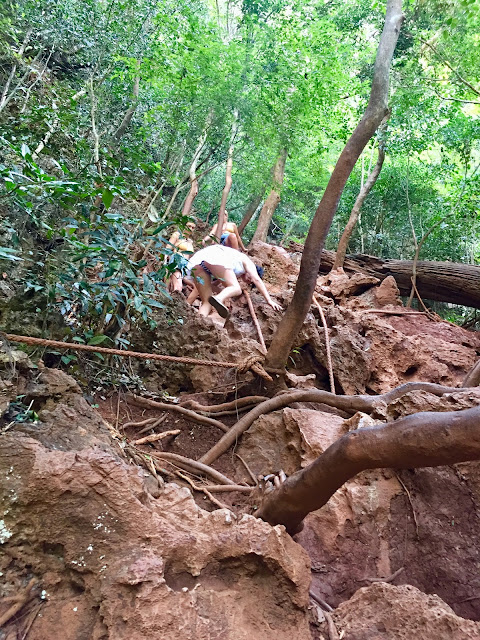 The following 100 feet made for the same idea. Grab the rope, watch your step, and hope for the best. All the while, monkeys were swinging to and fro above our heads. Literally. It wasn't too far up that I removed said cheapo flip flops and went bare foot. That had to be better than the rubber flip flops on damp rocks. 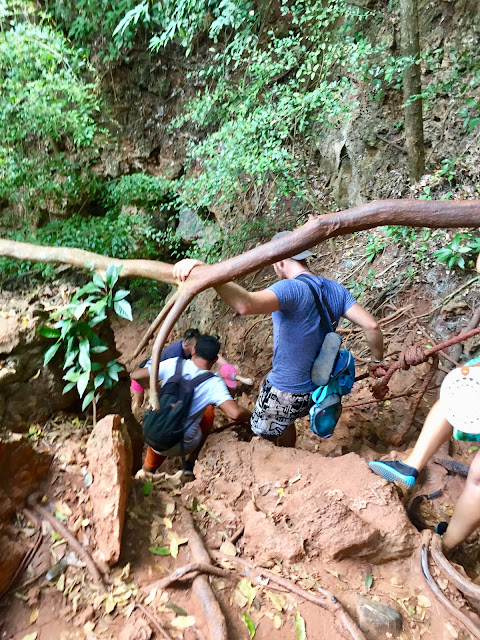 In good nature, I was billowing sweat roughly 4 minutes up into the hike. When asked "How is it?" of those climbing back down, we heard everything from 'amazing' to "ugh' to 'its hard'. And so we marched onwards until we arrived at the lookout/viewpoint. This immediately made up for all the hard work to get to that point. The views were stunning!!!!! 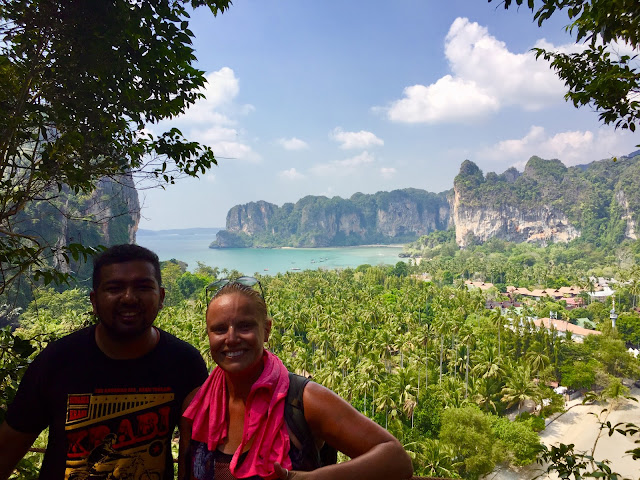 From the main viewpoint we played the game of 'this way or that way?' until we found another path that had a big warning sign, accompanied by 'BIG fine for going down this trail' - and so we descended. I admit, it took some convincing for me to go down the trail - it was hot as hell out and I was completely drenched at this point. But I did it. Peer pressure gets me every time. We made it into the ravine, but upon the massive descent I hesitated right alongside my climbing buddy. There were 4 guys equipped with climbing gear who were making the decent to the lagoon or whatever it was called). We stood and watched them for at least 15 minutes.. and we could still see the first guys head. While standing there, with my fingers bleeding and my feet nearly the same, I made the decision to skip this part of the hike. I offered to wait it out for my buddy if he wanted to give it a try  but in the end neither of us opted to do it. And during that time, 2 of the 4 guys who had hiking equipment with them were still visible. And we heard that there was barely any water fown there which made it an even better decision. 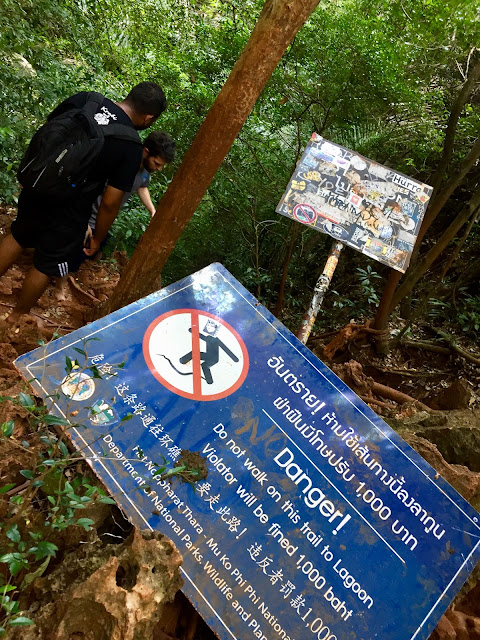 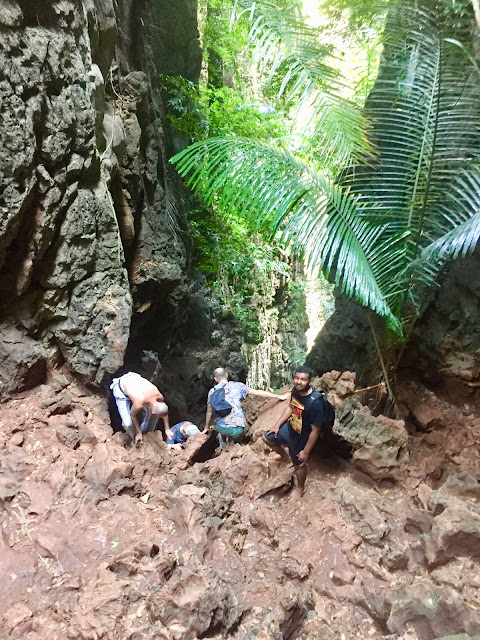 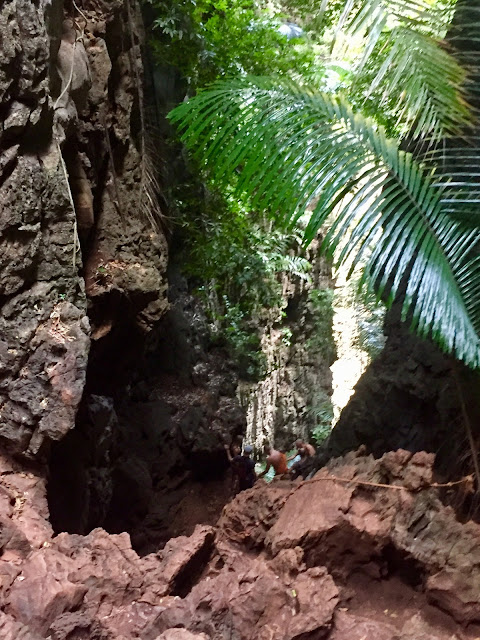 We made our way around the top of the island and back down to the trailhead. By this time, my hands and feet were killing me - two days of crawling around jagged rocks had taken its toll. I had a grannie limp in full swing by the time we re-reached the beach area. By this time we had completely lost friend #3 - assuming he gave up hope and went back to the hostel, we grabbed lunch and made our way back there as well. But not without a stop at the penis cave first. Of all the things to see in Thailand - the land where people rarely show any affection, even to hold hands, had a cave area filled with penis'. Wooden, plastic, rubber.. some hand painted, some not. It was the weirdest and most random sight thus far. 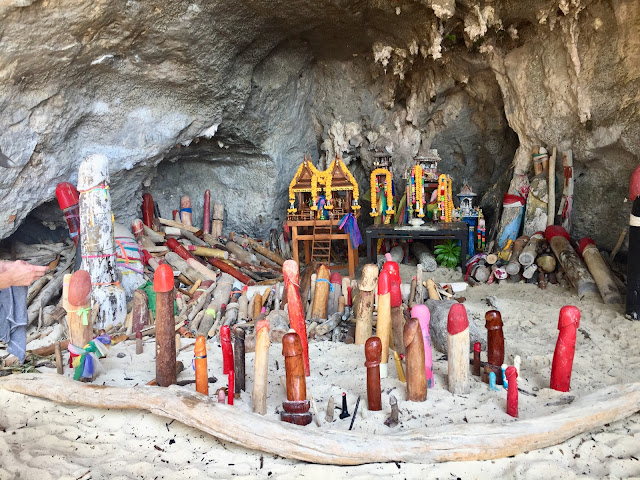 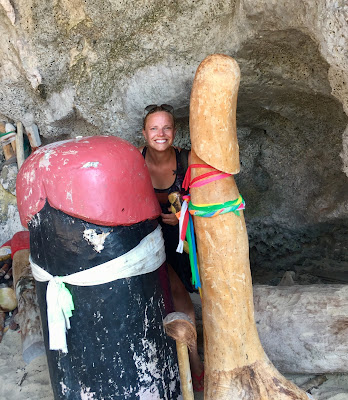 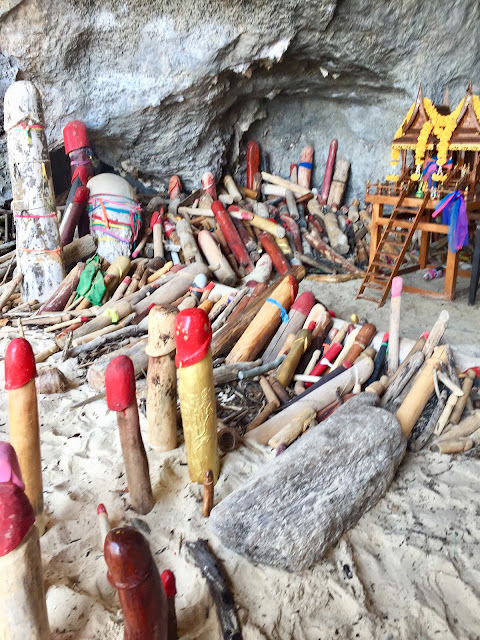 Other views of Railay Beach - one of my fave beach stops so far! 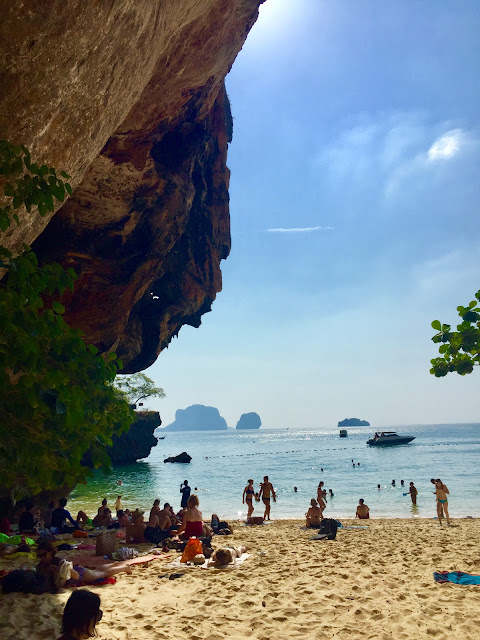 Alongside the beach, they had huge pictures of the beach... I guess the chicken wanted to be by the picture of the beach more than be ON the beach lol 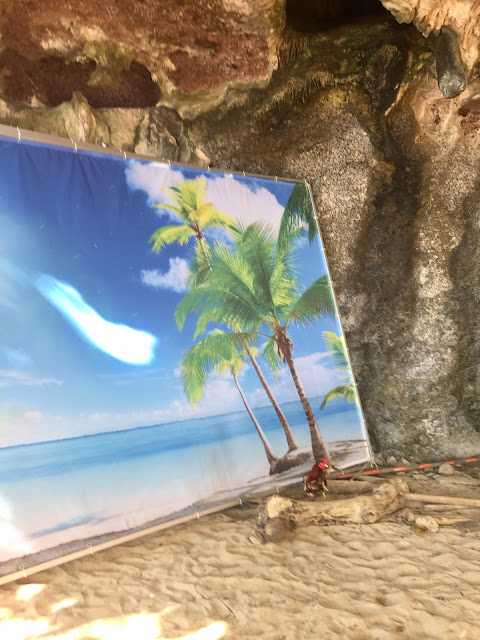 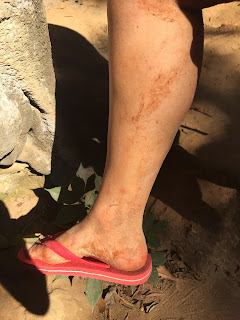 This is a whole new version of a Tuk Tuk!! Beach style!! 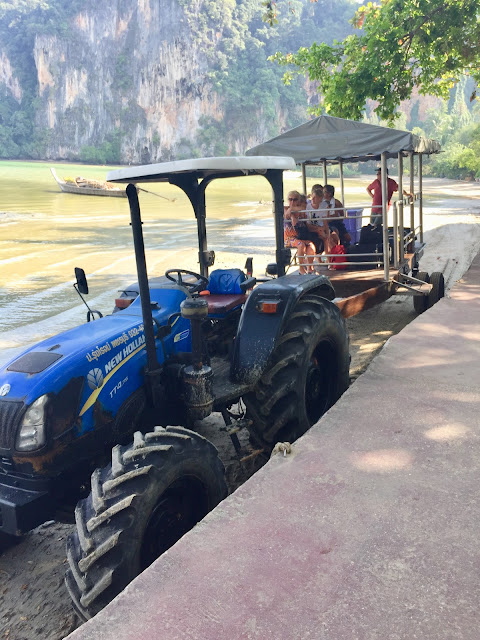 The water is amazing - no filter! 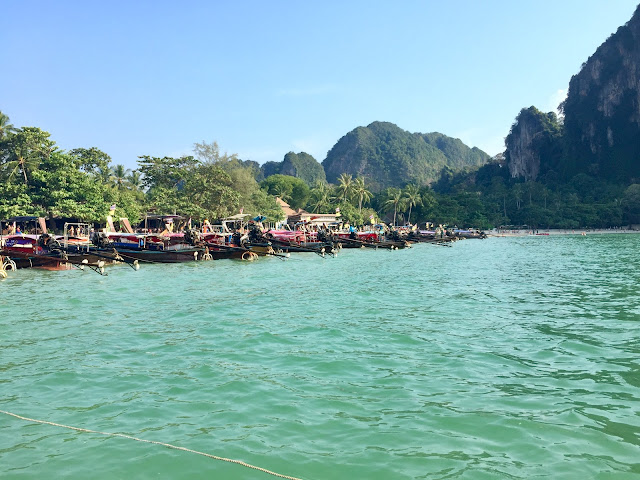 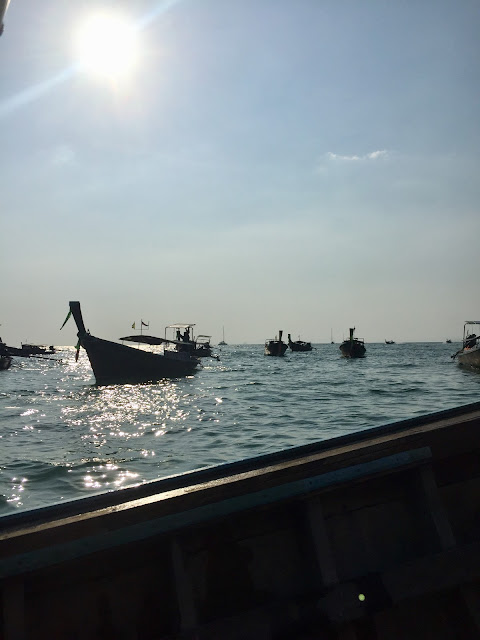 That night - time for a little Jenga while it was raining. I WON my first game of Jenga EVER! To be fair, whoever had the turn would have lost. It was literally the last move possible. 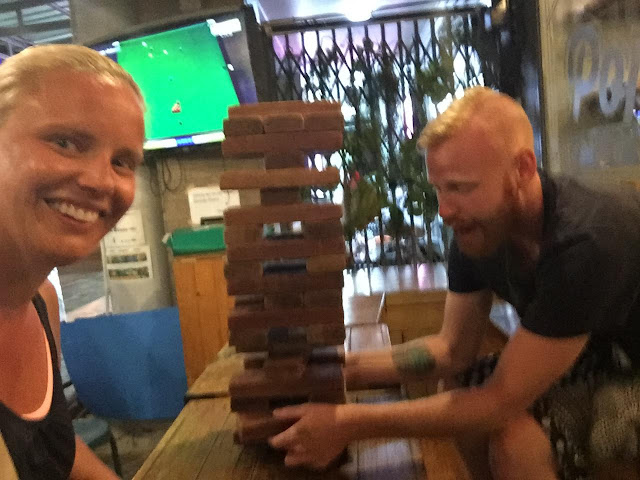