Showing posts from April, 2018
Show all

We all played a lot last night so morning movement was a bit slow going. Once we were upright, we headed out to venture the city. We made it down to Bourbon St where we swung by a couple of shops and then stopped on a sunshine filled balcony tabletop overlooking Bourbon to have a cocktail. A stupidly expensive cocktail, but it was pretty tasty and had an admirable amount of alcohol in it, so... almost worth it! Next up we wandered Bourbon St and meandered towards the French Market and waterfront. It’s fleet week and they had tall ships docked - but we missed out on the free     tours as they had just shut up shop. Still super cool to see! We wandered around The River walk, down towards the Riverplace Park, and into the French Market.  Frenchman Street Band It’s a daily open air market that's got a little bit of everything TA sty from local flavors and fare. We grabbed lunch, bummed a bit, and hit up the adult smoothie line ;) w, while we were waiti
Post a Comment
Read more 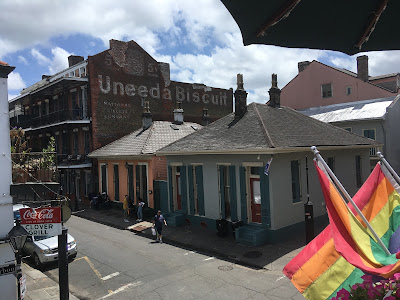 Our airbnb UneedaBiscuit - IDK why but this was hilarious to me After a really late night of hard core drinking, we slowly got motivated to mosy out and wander around New Orleans. Its a beautiful day - sunny, warm, and a perfect breeze. I hit 6,500 steps before 1pm according to fitbit!! Vacation is GOOD for me!! We stopped for a drink at this rooftop bar - scored a table in the corner and in the warm sun. Our $14 drink (just one!) was stupid expensive but turns out it packed a solid punch. Onward we walked Its Fleet week - a whole added level of shenanigans   Hit the Outdoor Market along our walk - we hit several landmarks today!! I was here in 2013 with my crazy biker girls and this Oyster Bar forever changed me...  Fleet week and tall ships  PALM trees and sun!!   Unique architecture  I ate it... it was tasty aside from its looks Hilarious Pride store Girls trip!!  Our kick ass bartender girl  Tall ships are coo interesting  Immigrant s
Post a Comment
Read more 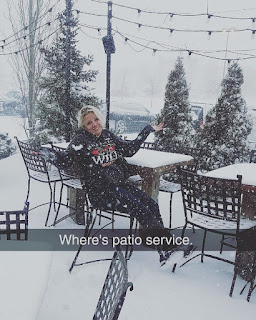 It’s crazy to think that exactly one week ago today I was helping people push their cars out of 2’ of snow at the bar (ok 22” but close enough)- one after another I was working my way towards a Good Samaritan award. And then, in the midst of it all, my keys fell out of my pocket somewhere in said 22” of snow and never to be found again. And my spare? Yeah it was in my purse... locked in my car. So I recruited a friend who brought me to my house to find my other spare key which was non existent. Next best thing? A wire hanger. Yep, just like back in the day, I busted into my own car with the ol’ wire hanger trick! And by this time, there was another 5” of snow on the ground... so we gave up and walked in the bar, only to not leave until they closed (early!) and then we bar hopped towards home. Luckily our buddy has a big truck so we literally swerved around 7-10 cars just randomly stuck in the road... including the local PD. But by this time, I was D.O.N
Post a Comment
Read more 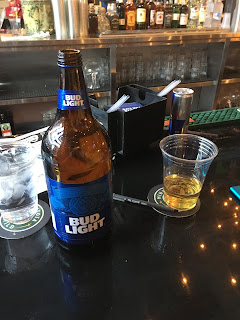 State of HOCKEY!   We managed to scalp tickets to the game for $40 each, literally 4 minutes before the game started, as we were finshing our 40oz beer at the TRuck Stop bar.. yep, thats a real 40.. and no, they did not offer paper bags with it :) In the State, the State of HOCKEY! Where the WILD WIN!!!!!! Happy Hockey Fans! He bought me a hockey puck, then saw these two girls who were at the game with their brother and parents... and he gave the girls each a puck since their brother had a stick.. it was way cute! Being Dorks after the game
Post a Comment
Read more
More posts