Showing posts from May, 2021
Show all

Macon Taxi Adventure: The sound of metal scraping pavement repeatedly, interrupted only by a loud THUD, a squeal of grinding car parts yelling for help.... 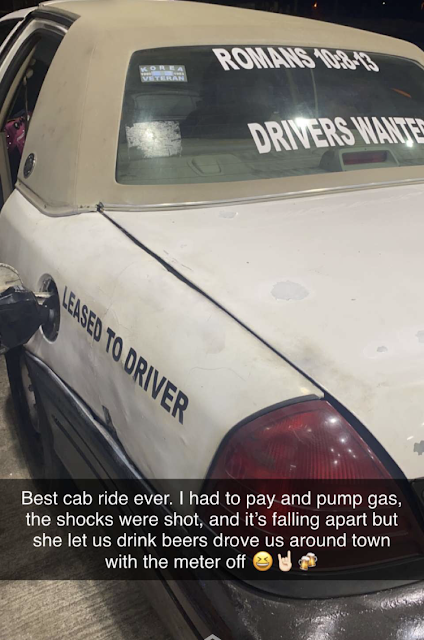 So we stopped in Macon GA on the way back home from Daytona Bike Week- quite the trip itself with Stiffy's massive slamming of the pothole that bent her front rim REAL good. When we finally found a place to park the bikes and (supposedly) sleep for the night, we called a cab to go hear live  music. We could HEAR the cab far before we identified what the sound was. The sound of metal scraping pavement repeatedly, interrupted only by a loud THUD, a squeal of grinding metal, and a driver on the phone yellin up a storm at whoever was on the other end. Then, the conglomerate of sounds came into our view - low and behold, it was our cab.  SOUND ON! (There's nothing to see - I just had the phone to capture the sound effects) (Video clip is the actual sound footage while in the cab..)  So off we go in a white crown vic, the rear end following along solely because it was still attached to the frame of the car, not because it was attached at the correct points. The right rear side of th
Post a Comment
Read more
More posts