Showing posts from January, 2019
Show all

A tall blonde girl, a 55L backpack, a 15L front pack and a 'taxi' ride on a scooter with a tiny Asian man driving. And no handles. "They broke" 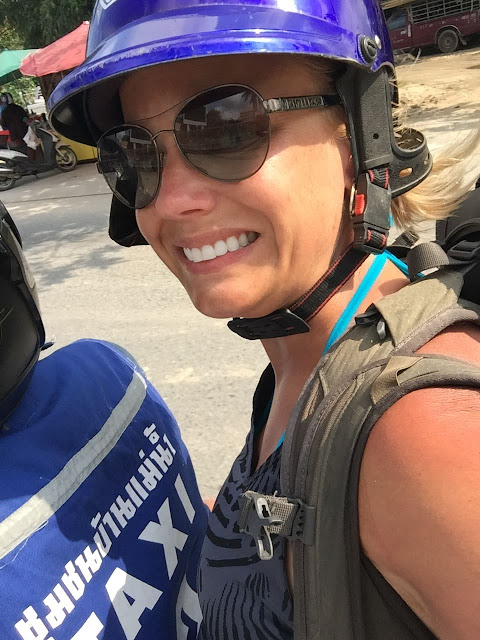 After the pool day, I made another reservation at a new beach - Chaweng Beach. It was supposed to be a livelier area which is definitely was! I stayed at Lub D Hostel - right on the beach, complete with its own pool(s), super clean rooms, and night entertainment. I took a bike taxi there - complete with both packs on.. and the driver didn't know where I was trying to go so I had to hang on with one hand (to the little plastic piece on the back fender, no less) while holding my phone with the map pulled up in the other hand. Why not snap a photo?! It was a 6 mile ride... and a bit of fear lol Hostel room at Lub D - super nice digs! They just opened in December... Old people like myself sure appreciate a staircase to the bed... versus a ladder!  Pool on the ocean Sitting on the beach in a beanbag for the sunset and start of nightlife Walking around checking out nightlife... and see this 'shooting range'... looks super safe...
Post a Comment
Read more 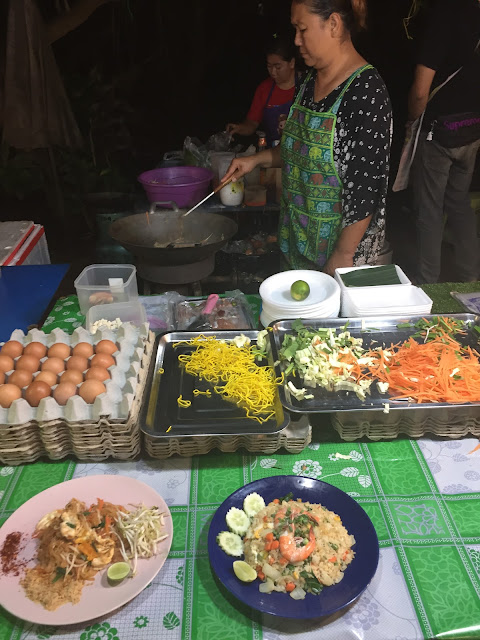 Fisherman Village, Koh Samui, Thailand~ a Chill evening and pool day to follow I walked from my hotel down to the night market in Fisherman Village. They had AMAZING street food to choose from! The next morning, I woke up early for the breakfast buffet, then secured a spot at the pool in the sunshine. Chairs were being reserved early on, and I really didn't want a spot in the shade!!! I lounged on the sunchair for a couple hours, reading another book on kindle while I soaked up the rays. Then came time for checkout. I asked if I could leave my gear at the desk and use the pool for the day and I could - yay!!!!  Beach Food Vendors
Post a Comment
Read more

Adventures of getting from Koh Lanta to Koh Samui 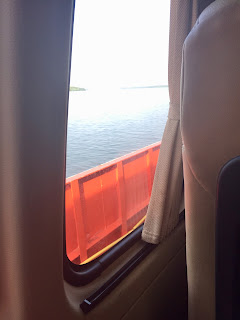 After 1.5 days in Koh Lanta, it was time to head to Koh Samui. I was planning on heading straight to Koh Tao, but after seeing that it would be a 16 hour trip, I decided to stop first in Koh Samui for a night. Which turned into 2 nights. Then three nights. The trip from Koh Lanta to Koh Samui was an adaventure in itself. First I got picked up by a songthew to go a solid one mile down the road, where we were directed to wait for another van. Along came the van, which shuffled us off to a cargo ferry - there were at least 12 vehicles on the ferry, and we were left in the van during the ride.   I couldn't help to think that if this ferry went down, I was a goner. Esoecially because I was in the BACK row of the van, with the van parked so close to the edge of the ferry, there was no way for the door to open and us to all get out if we had to. Here is to hoping! After the ferry, the van continued for a couple hours before stopping at a building in the MIDDLE of nowhere - the buildin
Post a Comment
Read more 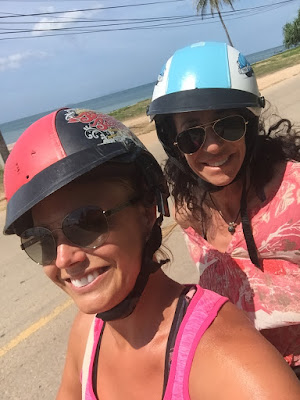 Koh Lanta Island ~ Me and Michele (my new ferry friend) decided to rent a scooter to tour the island of Koh Lanta. She didn't want to drive one, so I drove. First we started to scoot around the opposite side of the island to scope out the sights of Old Town.  We had very "stylish, well-fitting,  and attractive headwear" (lies) to use on the ride! Scoot scoot scoot scoot scoot Soon after we headed out, we needed gas. I don't know why, but the process of getting gas in this country makes me giggle. They reuse alcohol bottles (and or water bottles) for gasoline Getting gas here is such an adventure!  First stop: Old town - admittedly there is not much to do here aside from seeing the old wooden buildings that stand over the water. Old Town was once the main port for the island, now there are some cute shops, a few restaurants, and a couple of places to stay, but it seems and feels like a very low key area. Old Town - wooden buildings
Post a Comment
Read more
More posts