- January 09, 2019
After a few days in Luang Prabang, it is time to meander to southern Laos. Transportation options in Laos are SLIM compared to Thailand. My options were:  Take a 16 hour bus ride to the 4,000 islands of Laos; or take a 1 hour flight x2 to get there. SOLD! So, I booked a ticket from Luang Prabang to Vientiane, the capital of Laos. I have never thought of being a foreigner in an airport before. While the general rules/actions are the same, there are some unique differences. I am pretty sure I stood in EVERY wrong line...I went IN every OUT door, and made it known that I was a lost, blonde foreigner. LOL Security was much different that in the US - you put your stuff on the belt for screening as we do in the states, but then you just walk thru the unmanned metal detector and EVERYONE beeped but no one cared and there was no human on the other side to stop you. It was odd. And then once through security, I was able to go back outside and get something to eat. 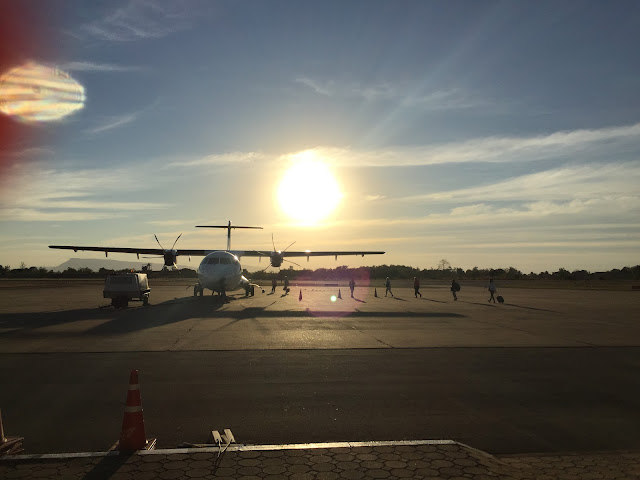 Had to laugh at the fact that my pack had a Fragile sticker on it. Fragile? I have been man-handling that thing for a month. There is NOTHIGN in there that is remotely fragile! 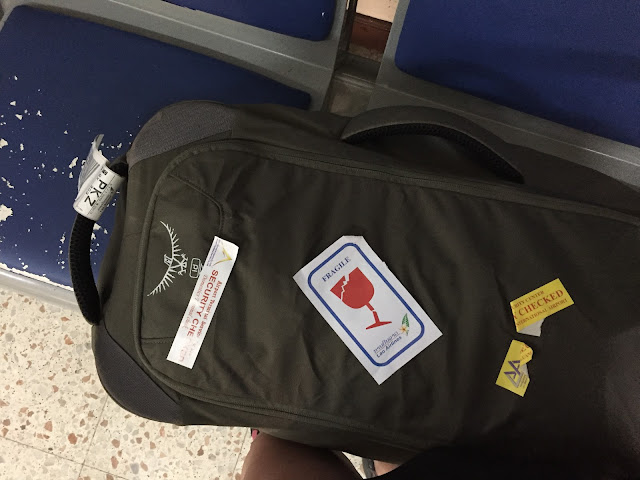 From there, I had another mini-flight (45 mins) to Pakse, Laos. I found a cheap hostel upon arriving at Pakse, and it was nothing fancy, that is for sure! 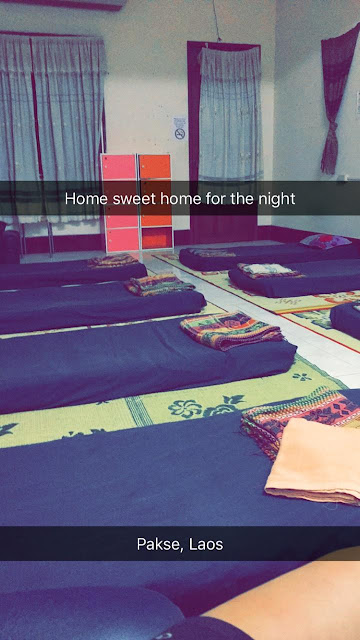 Considering the 'bed' was a lawn/outdoor furniture pad, I slept alright and it was only 8 hours before I would be leaving to hop the bus to Nakasong, Laos, then a ferry across the waters to the Island of Don Det. Don Det is in the 4,000 island chain in southern Laos, near the Cambodian border. Getting off the bus in Nakasong was hot, sunny, and crazy dusty experience. From the bus stop, I had to walk .7 mile down to the ferry pier, which would be leaving 5 minutes after my arrival. Talk about good timing! I hopped on the ferry, rather carefully... the boat(s) have seen better days though I have to trust that they will float, because I have no other option! 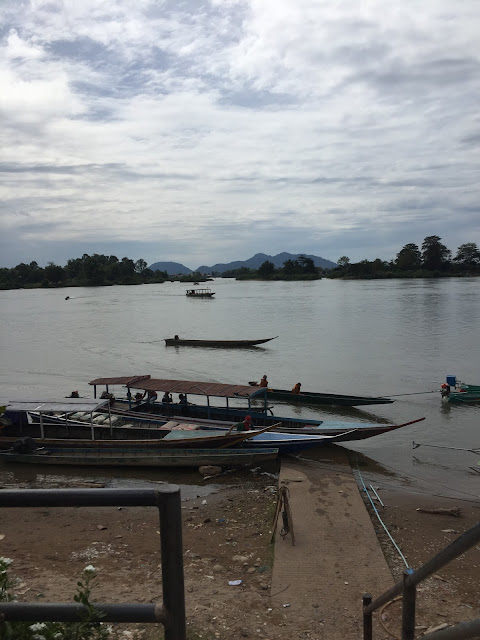 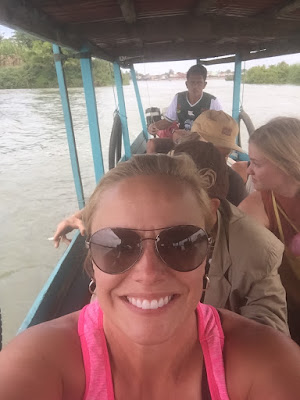 I step over the rows of wooden seats to get to the near back of the boat. The boat fit 2 people in each row of wooden bench seats. The floorboards of the boat were spaced quite a ways apart, allowing ample opportunity to locate not the nearest exit row, but, rather, the nearest bucket to funnel water out, if need be. 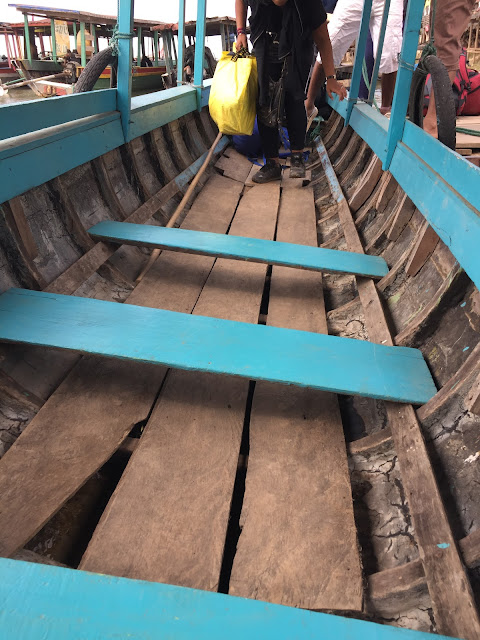 Water bucket floating by under our feet 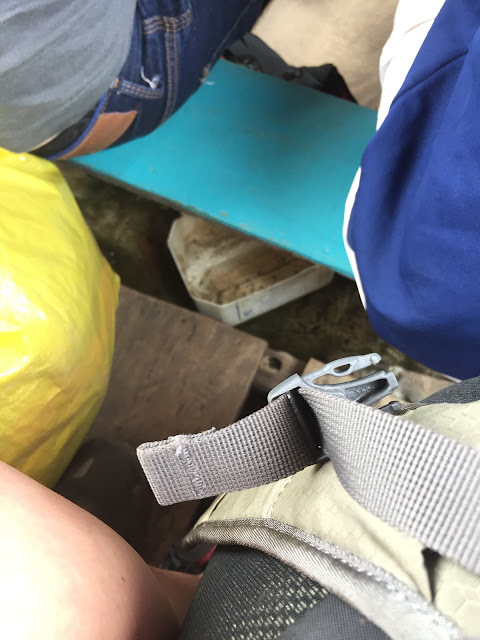 It looked like someone had started that job, as the water was not nearing the top of the floorboards, but a couple of decent waves along the route were bound to get my feet wet. Part of the adventure! We crossed by numerous islands and arrived at Don Det in the middle afternoon. I had read that there is no dock at Don Det, so you likely have to step into the water to get out of the boat. This had a couple of people with fancy shoes on all up in arms. I simply hopped off the side of the boat into mid calf deep water, grabbed my pack, and was on my way. I made it to the top of the hill and found a place to sit down for wifi and people were still freaking out about how to get off the boat without getting their prized shoes wet. They likely never made it long on Don Det. While I didn't know a lot about the island, I knew it had limited amenities. I had also read that it is quite easy to walk around and get offered a place to stay, which would be far better deal than booking online. So, with backpack(s) in tow, I started wandering around. Don Det is all of 2 miles long and not nearly that wide (even those might be high estimates). There is one 'main road' around the island. And by main road, I mean, there is a gravel alleyway in a circle on the island. Road is a bit of a stretch. 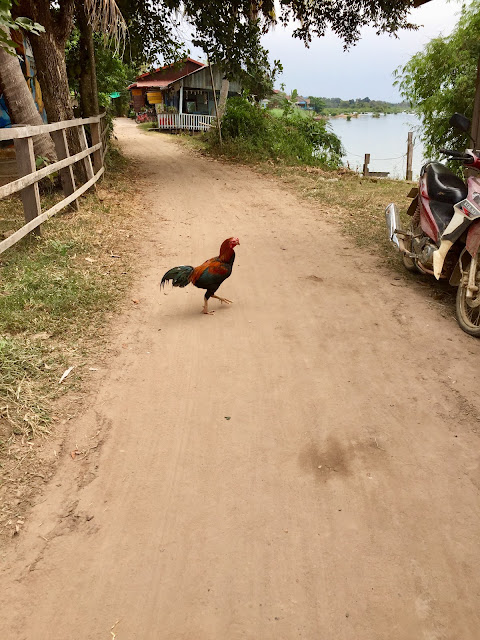 I wandered along the sunrise side, as they call it, and sniffed out my options. I admit I wanted to stay on the sunset side, even though it would be hot as H*** in the afternoons. The sunsets at Don Det are supposedly top notch. I walked quite a ways and saw a bright lime green colored bungalow - 4 in all and inquired on availability. There was one available, for 50,000 kip per night. Equivalent to $5.85. I asked to see the bungalow - it was extremely basic. There was a bed (no creepy crawlers on the sheets or under, I checked), a fan on the ceiling, and a mosquito net. The 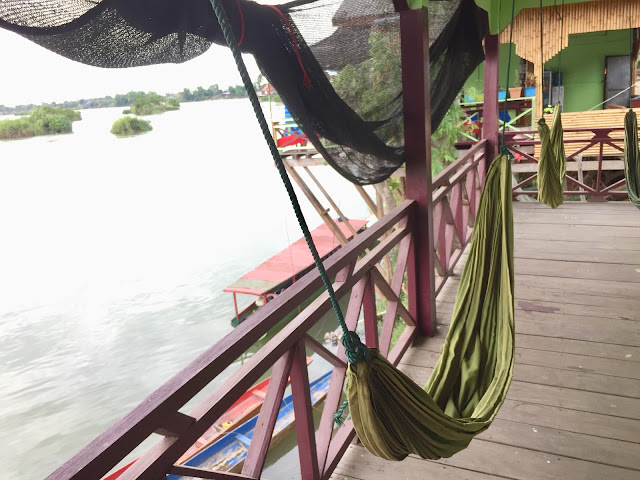 end. There was a nice balcony on the front side with a hammock that had my name on it. Sold! The temps late that afternoon were hovering at or over 100 degrees. It was a scorcher. And I have a fan at night. Here is to hoping my body is more acclimated that I think it is! I settle in and find my place in the hammock where I pulled up Kindle and started to read my 3rd or 4th book of the trip. I don't remember the last time I read a book. My problem is, once I start, and if the book is half good, I cant stop. So this is the perfect place for that 'problem'!! Unfortunately, there was no dramatic sunset due to cloud cover. Maybe the next day. While my bungalow had a sign that said 'wifi' - they didn't really mean the wifi we are used to back home. Their wifi meant that I had to go ask the owner to turn on her wifi/hotspot and that was sketchy at best and no where near as fast as a turtle, even. So I made my way to a local restaurant, there are TONS to choose from considering the size of the island, and found some wifi to use to research my next move. I would rather be using a paper book guide, but considering the weight of such an item, I have to resort to my phone having the knowledge. At approx. 10:40pm, there was an announcement made that 'power will shut off soon' - I wasn't sure that I heard that right so I went and asked someone. Sure enough, at 11pm, the power/wifi/etc. would all turn off for the night. Talk about unexpected! This is truly the island life. 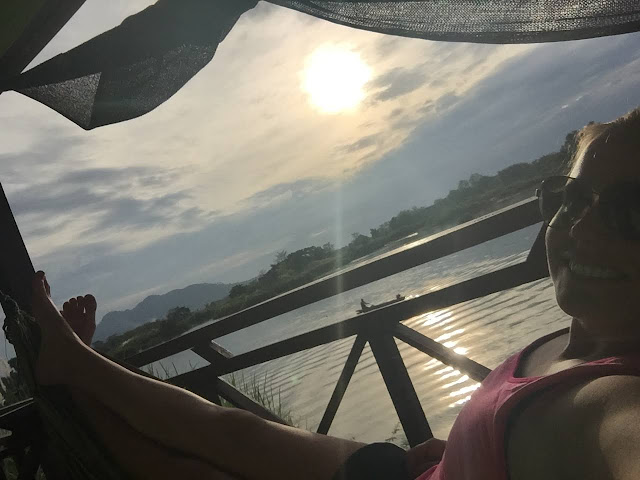