Showing posts from December, 2017
Show all

Sturgis 2017 - posted now because I forgot to hit the 'publish' button apparently! 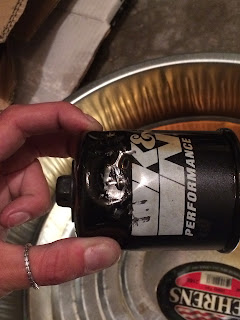 Well, I got home on Sunday from riding to Tail of the Dragon, up the ENTIRE Blue Ridge Parkway - into Maryland - then across PA, OH, and MI and back home. Now its Wednesday and time to head to Sturgis. Didn't have to unpack much!!  Left MN around 7am - got to Sturgis 10 hours later.  We had great riding, though it was by FAR the COLDEST Sturgis rally I have ever been to. I wore leathers almost all week... and it was cold sleeping in the tent which made rest hard to come by! And it also made cold beer not all that appetizing on the coldest night! So, between cold, shenanigans, and lack of wifi, here is a summary of Sturgis in photos! 3 days before we were leaving, I told my friend I would teach her how to change her own oil because its super easy. It didnt turn out easy at all. The shop she had taken it to the last few times overtightened not only the filter, but the oil plug too. Which resulted in a friend coming over to 're-drill' or whatever it is called her plug and
Post a Comment
Read more
More posts