Chiang Rai to the White Temple to Laos 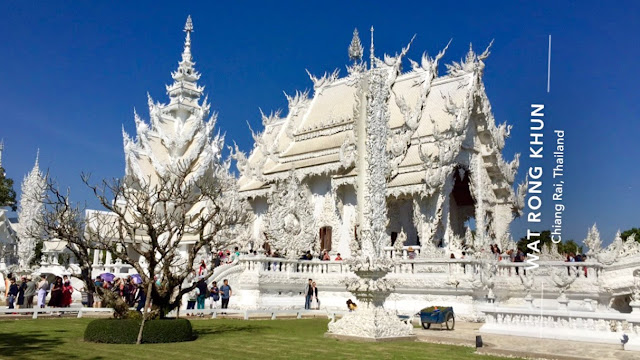 The next morning I walked the 2.3 miles to the bus station. I had no ticket but wanted to get to Chiang Rai today - a town about 3 hours northeast of Chiang Mai. I had thought about keeping the scoot and riding it to and from CR - but that would mean backtracking, as from CR I wanted to go into Laos. 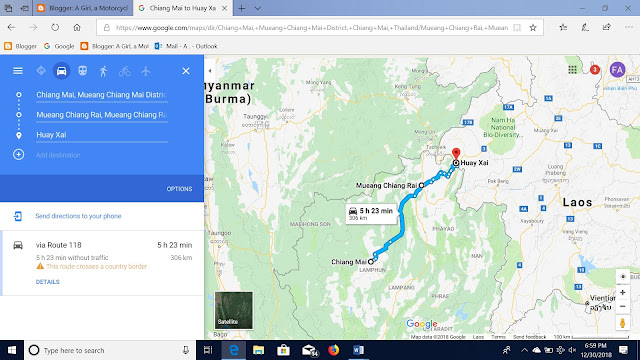 I stopped at the green bus station window to inquire about a ride - the busses with AC and fancy reclining seats.. I was told the busses were full until the next day at 6:30am. I was bummed but also knew that my odds of getting a bus that day were slim, so the next days' bus was booked! I then had to find somewhere to stay - preferably near the bus station- which I did. I walked 1.5 miles the other way to get to the hostel where I'd stay for 12 hours. Had a decent sunset view from the room at Train Hostel. 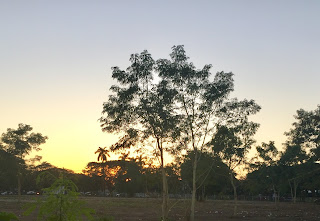 The next morning I woke up early to walk to the bus station once again. I was ready to leave Chiang Mai and excited to start the next leg of my journey, destination truly unknown aside from Chiang Rai (CR)- where I only wanted to go to see the white temple. I hopped on the bus to CR and while I really wanted to sleep, I instead started researching many things for the next leg of my journey - including where to go, how to get there, how to use my phone data in Laos, how to get a Visa for Laos, what the currency was, etc. After all, I had zero intention of entering Laos until now. LOL. 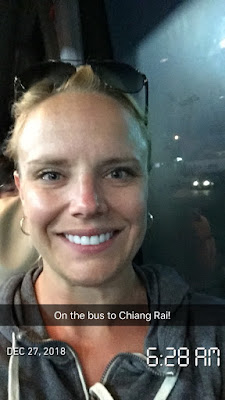 After a lot of Google research on the bus I found that the local city busses go to the white temple area every 20-30 mins. I bought my ticket for $1USD and waited ten minutes for the next bus. The city bus is something I like to take everywhere I go at least once. It's a great cultural experience - the people watching, the living like a local perspective, and the adventure of riding the seemingly run down busses that puffed huge black clouds every time it shifted gears. I boarded the big red bus and found a seat near the front. The bus reminded me of a school bus back home- the rubber seats for 2, no seat belts, and windows that slid up and down with huge metal latches on each side to hold in in order to slide it. This bus also had homemade curtains on each window that were nearly tied into a small knot in the center of the window allowing me to see out the window but block the sun if I so choose. 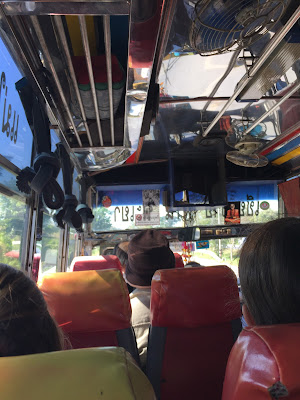 The ride to the white temple was all of 20 mins. The bus speed at the side of the highway in front of an abandoned car sales lot and not having a clue where I was, the driver simply pointed at me and said "off here". I got off the bus and awkwardly looking around me I was wondering where I was supposed to walk next. Just then the big red bus pulled away, leaving me in a cloud of dust and black smoke, and once that cleared I could see the top of the white temple just down on the other side of the road. In the blazing hot sun I started traffic hopping my way across the busy highway and to the temple. First I had to use the bathroom - so I unloaded my big pack, leaving it outside, and paid the gal 3B in exchange for 4 squares of TP. Next I put on the proper attire for temple viewing- a sarong to cover my knees and a shirt to cover my shoulders. 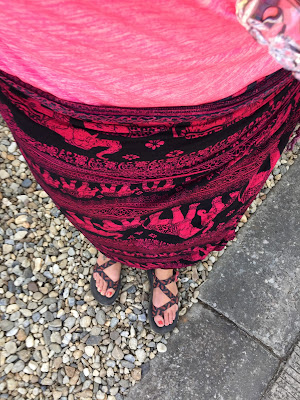 In the scorching sun and blistering heat I have kind of gotten used to putting clothes ON. It was so torturous the first several times I had go do it- but my body is slowly adjusting to the climate it seems. I arrived at the white temple and was blown away by how stunning it is!!! Against the bright blue sky, the colors were crisp and refreshing. The architect who designed the temple did so in white to make the actual architecture of the temple stand out ( versus using the gold colors commonly found - which he felt covered up the beauty of the design). He also added in quirky artwork and sculptures throughout the grounds. 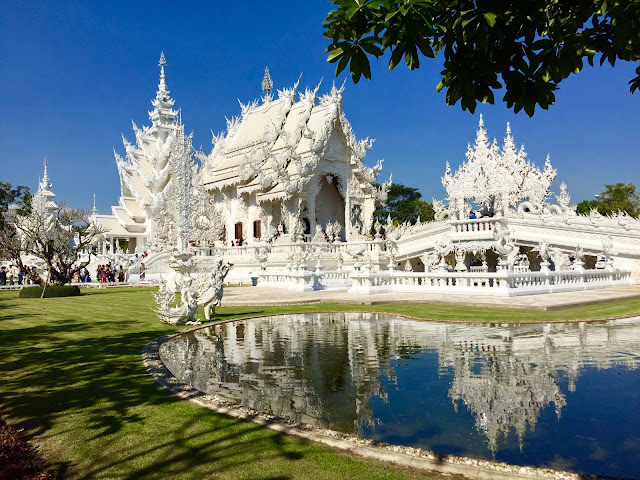 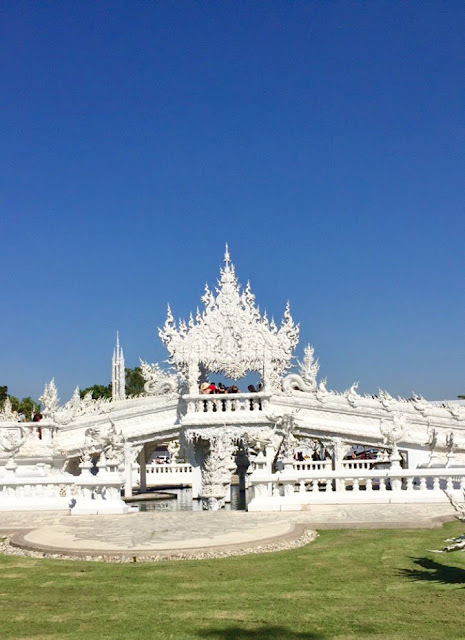 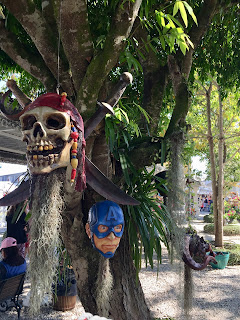 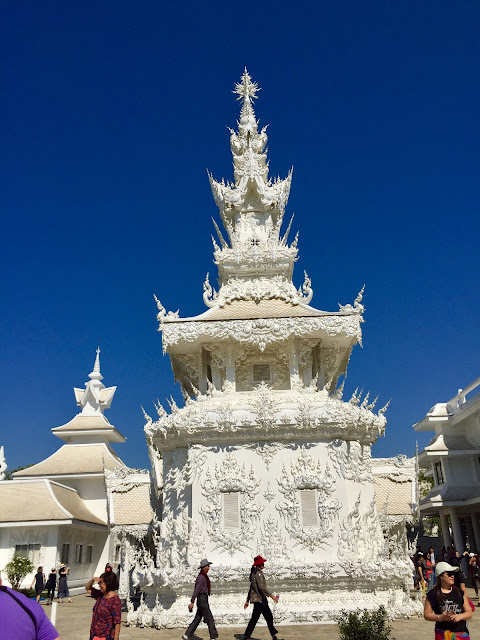 And a random gold building to prove his point? I don't know that for sure, the history here was in Thai language which I cannot read. 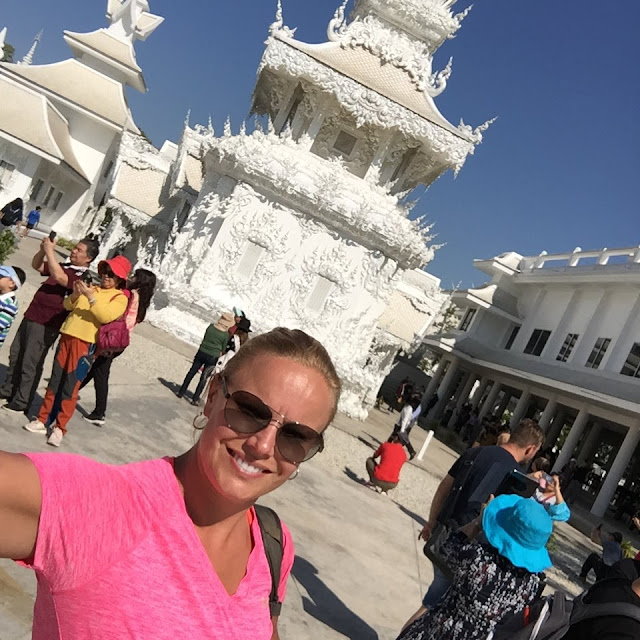 The things hanging around the tree like object are wishing leaves. You could buy one and write whatever you wanted on it, which is then hung on this tree thing. Once the tree thing is full, they move the leaves to the underside of the walkway. 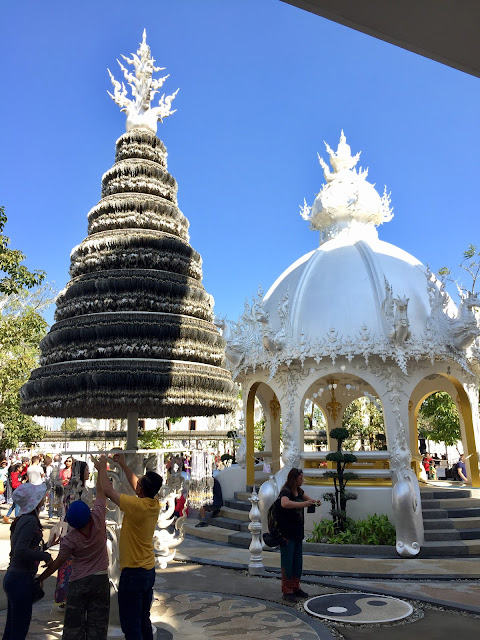 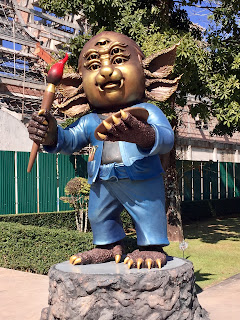 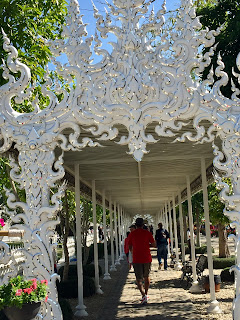 The white temple had me awestruck at the sight. It was unlike any other temple I'd seen thus far. Very much worth a quick stop! After walking the temple grounds, I picked up my pack from security and made my way back to the local bus stop. Which was completely unmarked and if it hadn't been for Maps.Me app, I would have never known where to stand. It didn't matter, though, because a bus didn't come and I stood there for a half hour. I eventually flagged down a tuk tuk, which didn't have room for another body, let alone a body AND a huge pack. But, the locals all squeezed in and I got a ride for 20B back to the bus station in CR. There, I was able to buy a bus ticket on the local bus to the Laos border for 65B. And there was room on the next bus, which left at 2pm... a mere 30 minutes. The day was piecing together quite well!!! The bus arrived, I boarded with my gear, and was the only foreigner on the bus, which was headed to Laos over the span of 2 hours. 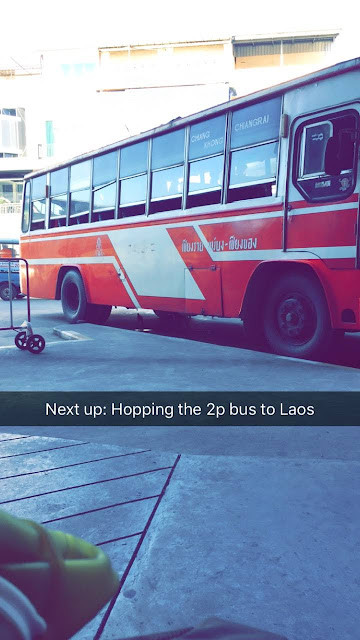 It was a great ride - people watching, sightseeing, and soaking in the fresh (ish) air along the way. 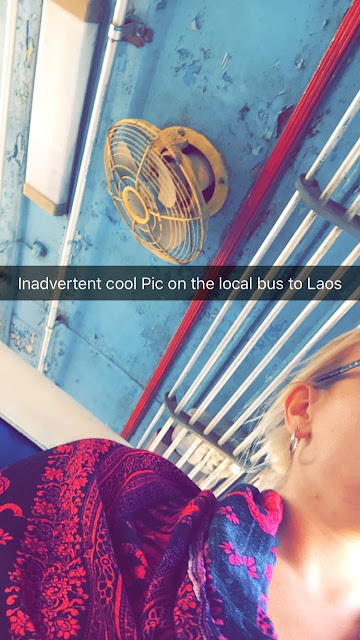 Once at the 'end stop', I was dropped off in the middle of nowhere - kind of a theme. 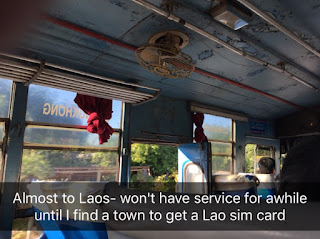 There, a tuk tuk driver picked me up and drove me to the Customs border of Thailand and Laos. Being it was past 4pm, the customs were officially closed. Which, in reality meant, that I just had to pay an 'overtime' fee of $1USD.  I paid for the Lao Visa, went through customs and got stamped out
of Thailand. 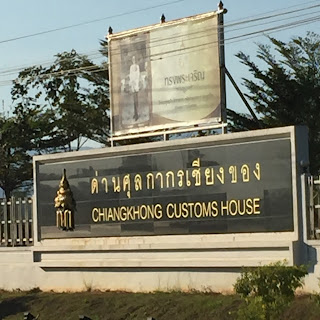 There, I had to wait for yet another bus to take me to the Laos border, which was just over Friendship Bridge. I wanted to walk, but was told this was not an option. So I took that bus across the bridge, showed proof of payment for the Lao visa, showed my passport, and got stamped into Laos with my 30 day visa. From there, I grabbed a tuk tuk with others crossing the border, and got dropped off in Huay Xai, once again with no accommodations booked. 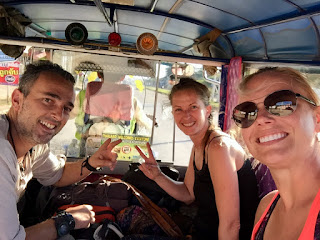 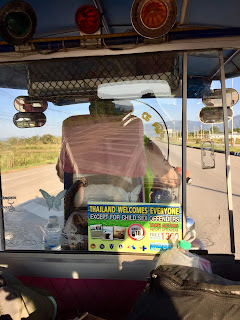 I walked to the first hostel I saw and lucked out as they had one bed left and the hostel itself was quite nice. I was able to buy a slow boat ticket for the morning departure from the hostel as well. SUCCESS of a day for winging it!!!! 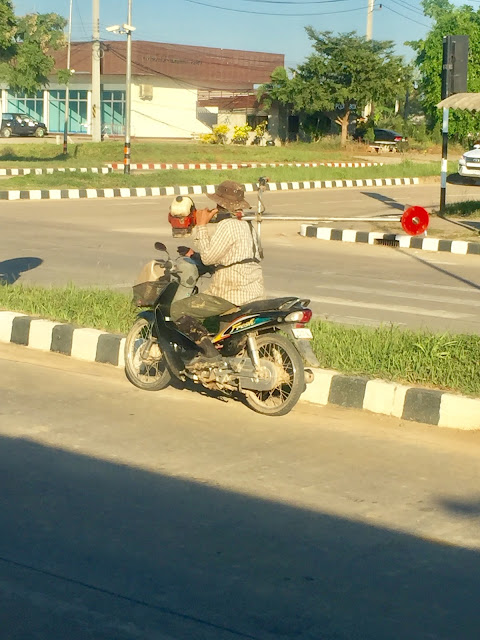 Friendship Bridge - crossing over from Thailand to Laos 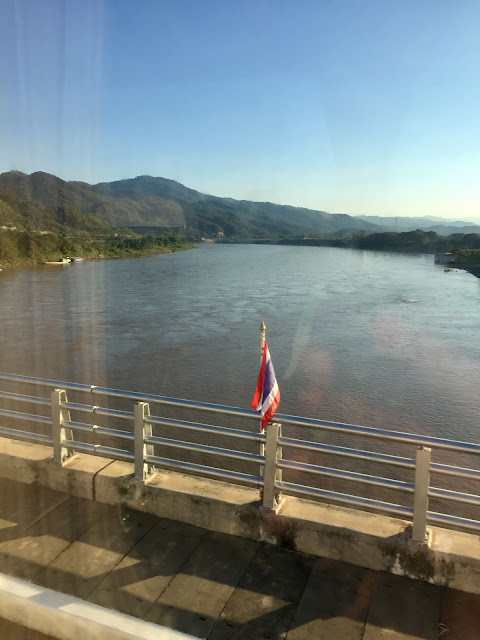 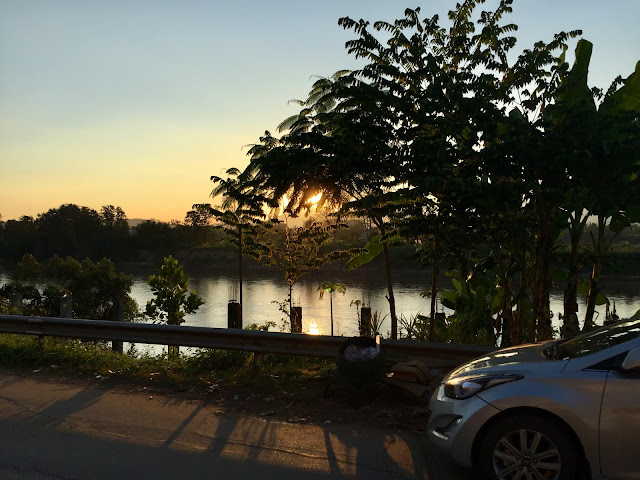 I showered and me and the peeps in my hostel went out to grab dinner - where I was encouraged to try stuff I would never otherwise try. Aside from the chicken feet, it was all decent eats!!! 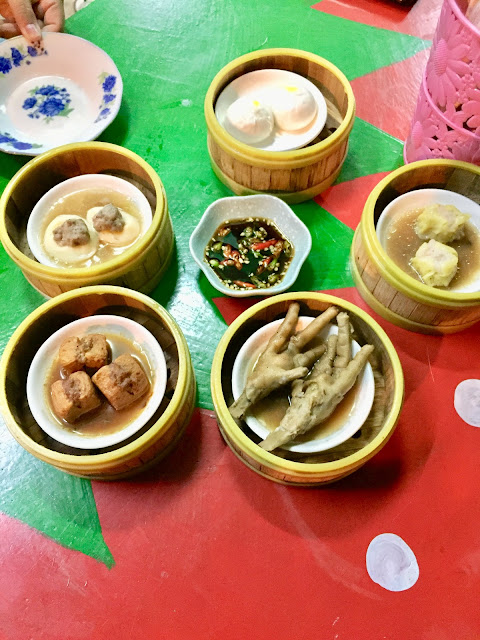 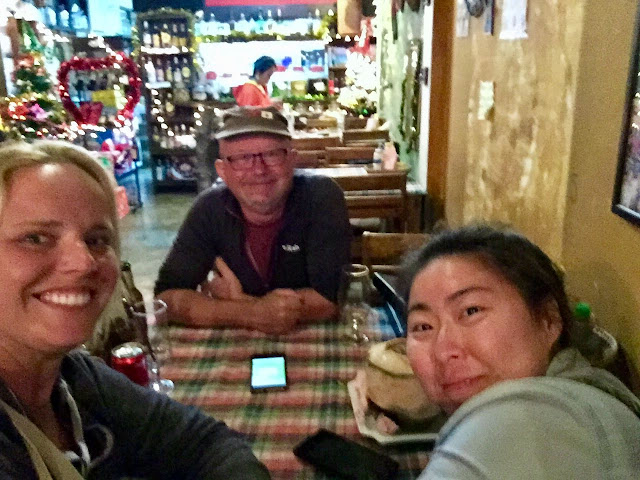