Next up was a ferry to Ko Phi Phi islands, Thailand. As I was buying the ferry ticket, one of the guys from the hostel stated that he was also going to Phi Phi so we traveled there together. Turns out the others from the hostel were going to be there tomorrow. Small world when traveling! We hopped the ferry and off we went. We were lucky to be one of the first people on the ferry boat, meaning we both scored chairs on the upper deck in the sunshine for the ride. Ahhhh, sunshine!!! 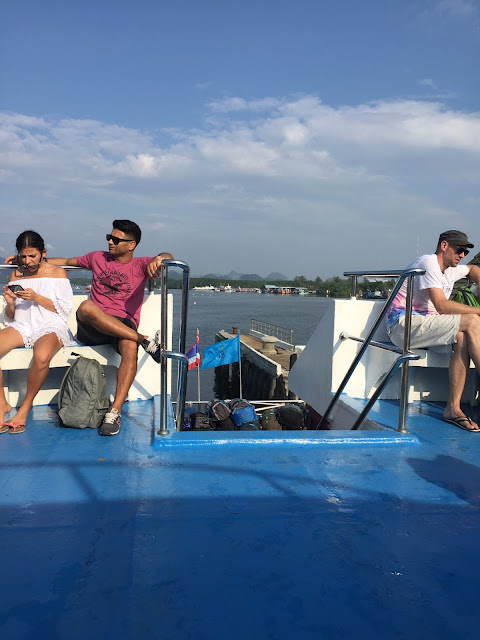 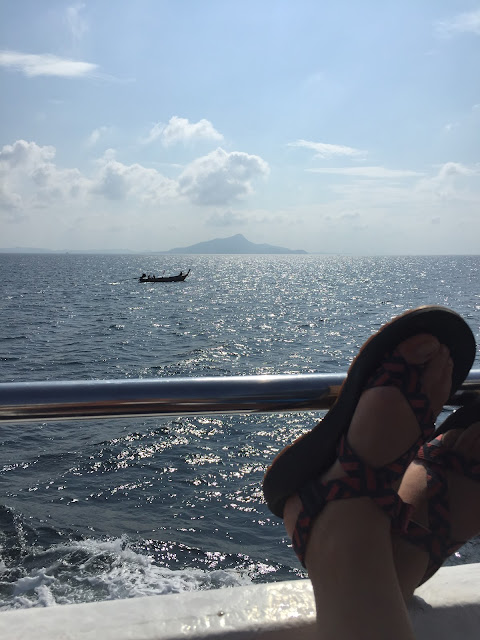 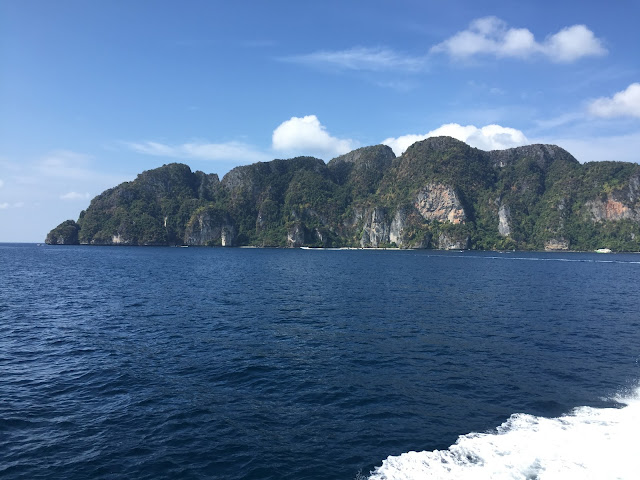 It was quite warm, but once the boat started moving, the breeze was amazing. I managed to finish yet another book along the way.  The boat arrived after 2-3 hours on the water and we were met with mass chaos. 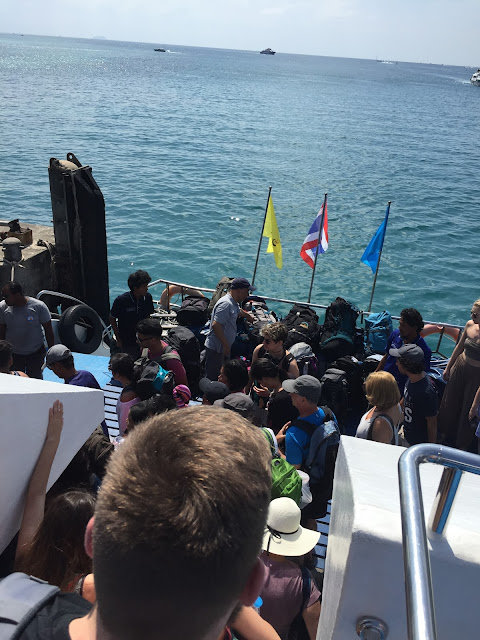 By this, I mean, we were herded like cattle off the boat onto the pier, and through a single file line to pay 20B to the island ‘for cleanup’. Next we walked down the long pier to the town of Phi Phi – there must have been 100 vendors standing on the side of pier with signs to advertise hotels, hostels, tours, transportation, and any other tourist thing you could imagine. I didn’t have a place to stay, but I couldn’t handle all the swarming of people and yelling of “STAY HERE” – I literally high tailed off the pier just to get out of the madness. 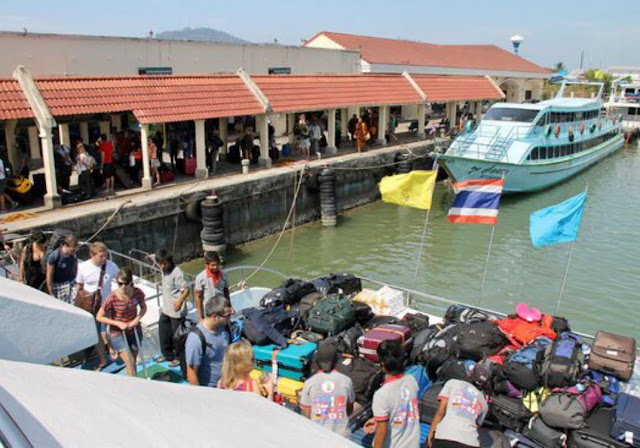 We stopped at a restaurant that had Wi-Fi so we could find our next accommodations. There were hundreds to choose from, many had not so great reviews. We had lunch and ended up walking down the beach stopping at hostels along the way to inquire on price and room setup. 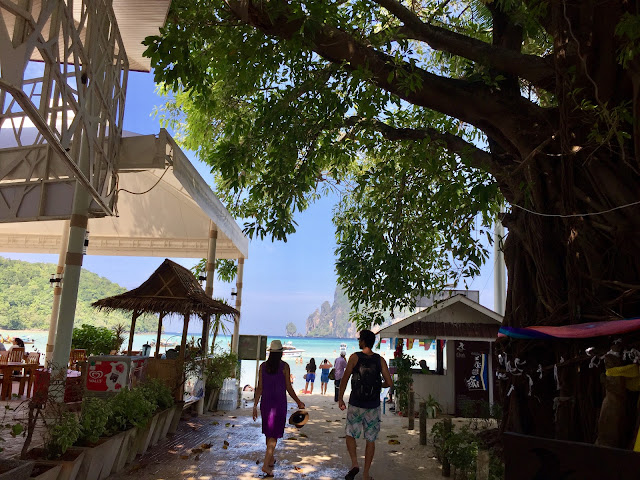 I will not stay in a dorm room with more than 8 people – turns out 14 people is common on Phi Phi. And all of the hostels along the beach advertised “music until 2am – free earplugs”. I was apprehensive about the beach hostels to begin with but thought I would check them out – after making several stops along the beach, carrying our packs and sweating in the afternoon sun, I was feeling a bit defeated. We decided to walk inland a bit and again stopped and inquired at several hostels. By this time I was starting to get annoyed as I just wanted a place to call home so I could put my pack down and go wander. 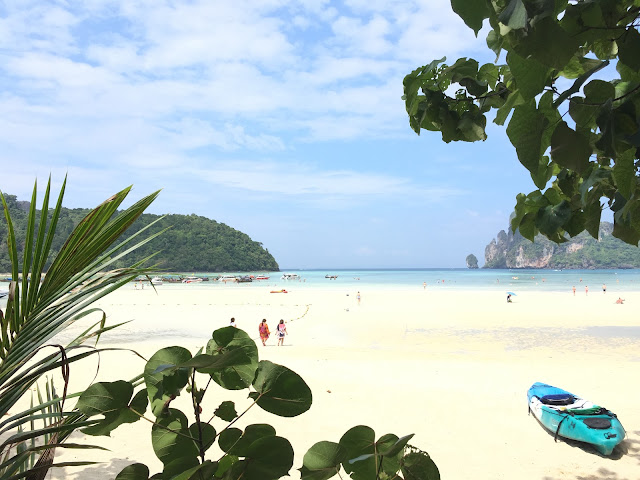 Just as I was running out of patience, we found a hostel on a little side street, far away from the beach chaos, with 4 beds to a room for a good rate. SOLD! We dropped the packs, relaxed for a bit, and then meandered to the viewpoint. Considering we could see the viewpoint on the hill, I figured it would be a bit of an upward hike. 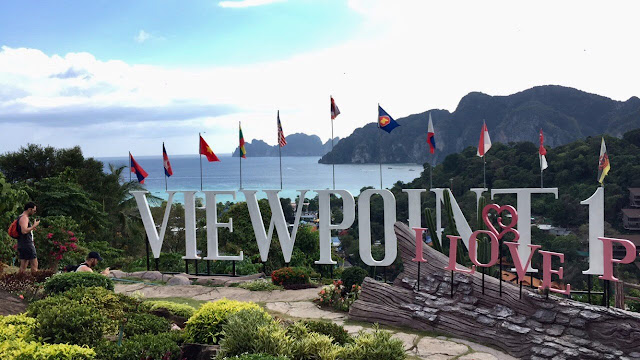 My legs were still a bit shaky from all that rock climbing, but a viewpoint is a viewpoint! We started up the street and followed the signs to ‘viewpoint’. One more than one occasion there were more than one sign for the place – each with an arrow pointing in opposite directions. We kept right and were then on a gravel road headed basically straight uphill. The road curved to the right, then the left, going higher and higher. The houses became more along the lines of huts. Many had no entry signs – which were funny as the translation was not quite right, but the point was there. We kept going up and up and up, the road becoming more and more desolate with fewer and fewer people and homes. At one point it looked as though we were walking through someone’s yard, the road was overtaken by grass and was very narrow. At last, we made it to the viewpoint and immediately noticed the “CLOSED” sign on the stairway. No freakin way. We walked allllll that way for it to be closed? Then we noticed a side trail and that took us around the building (which was not the viewpoint, rather someone’s house) and to the ticket booth. We paid the 30B to enter the area, hiked uphill a bit longer and finally arrived at the viewpoint. 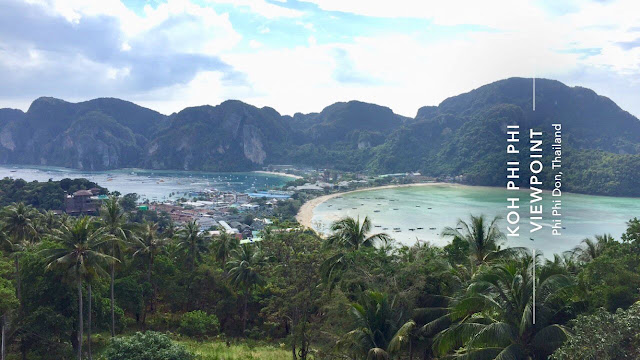 From t he viewpoint we could see both bays of Koh Phi Phi island. The one on the left is the ferry bay where all boats come and go to the island. The one on the right was the beach area. We sat at the viewpoint for a while and just took in the sights. It is hard to believe that this was my reality. That I am on this journey and getting to see all of these amazing sights – when I stop to think about it, to truly think about it, I am nearly overcome with emotion. This truly is a trip of a lifetime, though, my lifetime will see more of them for sure. 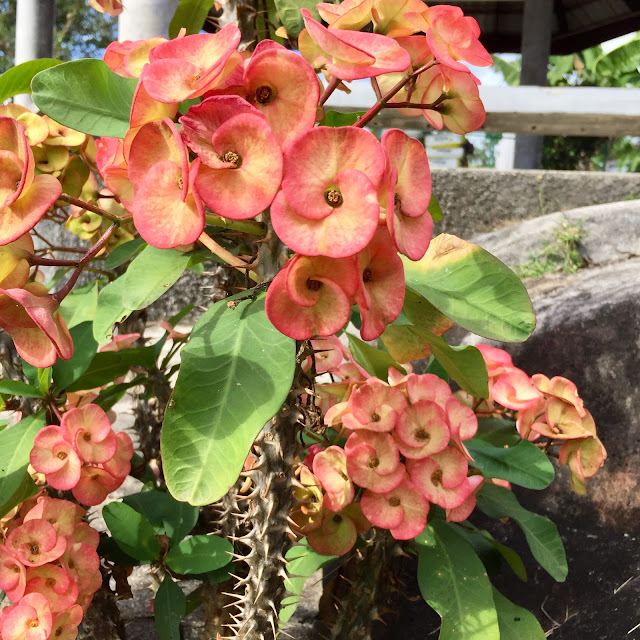 The viewpoint had THE most random sculptures everywhere - 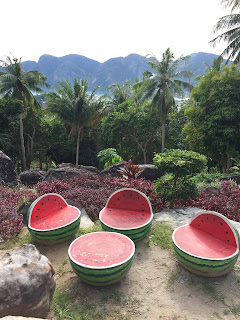 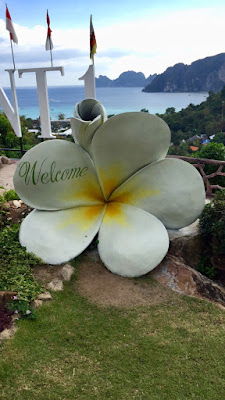 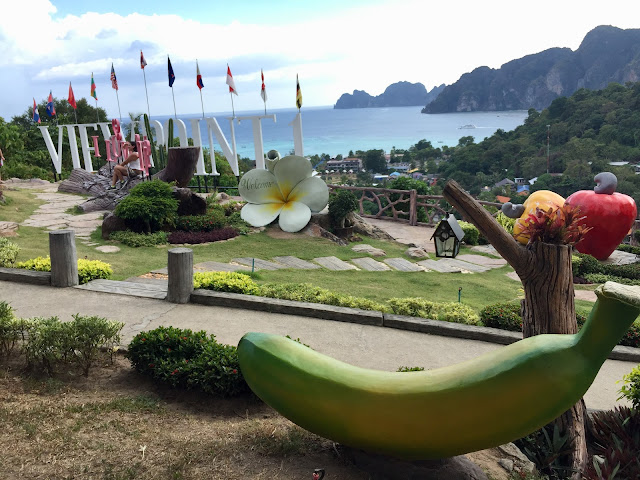 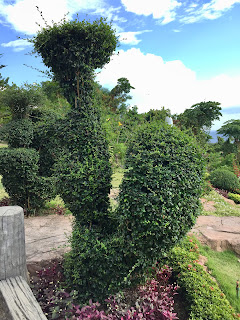 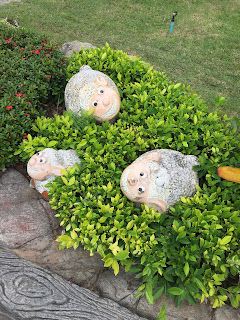 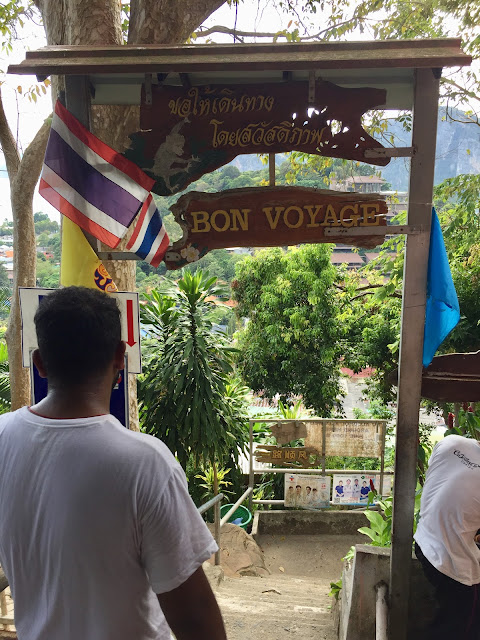 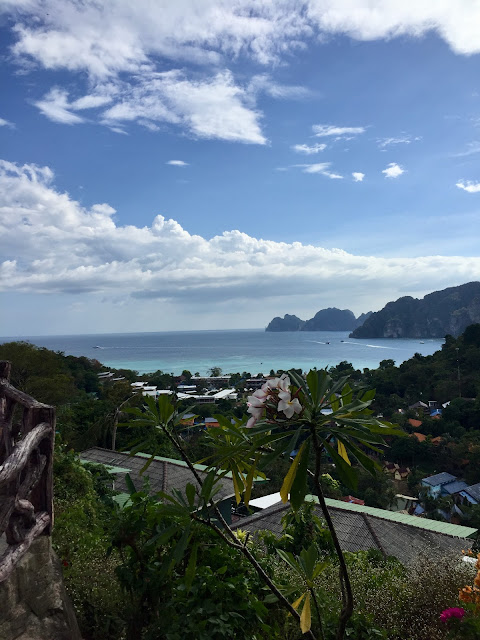 After the viewpoint, we walked down a different path – turns out this path would have been WAY EASIER to take up… it was complete with concrete path and stairs the whole way. Basically, we took THE LONGEST path to get to the viewpoint one could possibly take. My Fitbit was going wild. 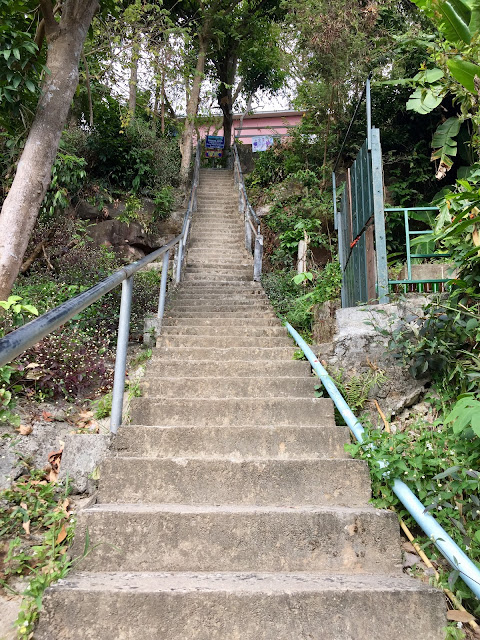 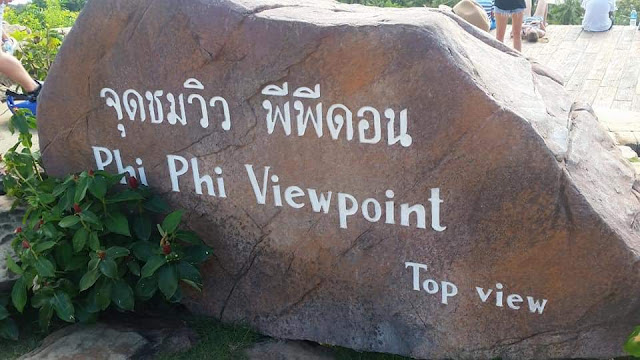 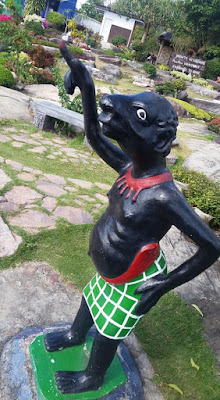 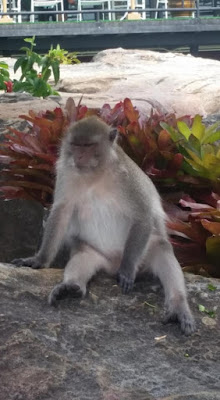