Things I learned during my 27 hour flight & arrival in Bangkok in the mdidle of the night...

No matter how much sleep you think you will get on a plane… you will be wrong. Taking a train from the domestic terminal at Chicago O'Hare to the International terminal I kind of like crossing a country border. Things become suddenly foreign, in a good way. When taking a Korean Air flight, operated by Delta, all of the flight announcements are made in Korean. I don’t know Korean. I only studied Thai. So I waited at the back of a VERy long line of people waiting to board the flight.. only to find out I could have boarded first zone. This is not a bad thing though. I got a lot of people watching in, became suddenly aware of just how little I am in such a big world, and also got to stand for another 20 minutes, which was also a good thing. 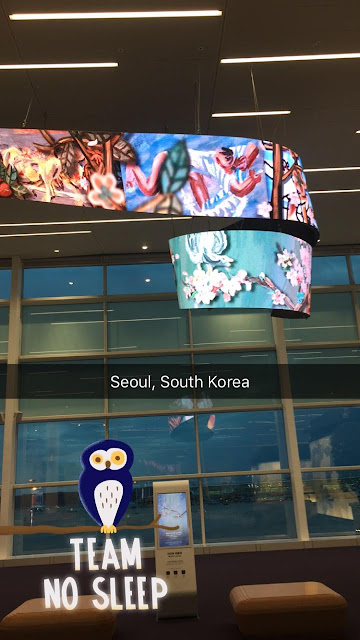 When the airlines hand you slippers, always say yes. I did just that, but wasn’t really sure why. Turns out your feet swell like hot air balloons consistently through the flight. And even the loosest shoes become a can of biscuits on your feet.. just waiting to bust open. Wait for it…. #bloodrush 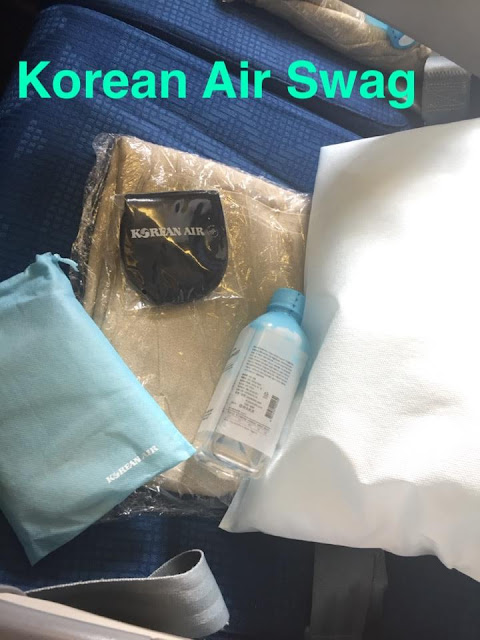 A fourteen hour flight is LONG. I was kind of prepared for it (lies). And when faced with such a long flight, when I hit the 5 hour flight time mark and realized I wasn’t even HALF way to Seoul Korea – the last (more than) half of the flight got even longer. 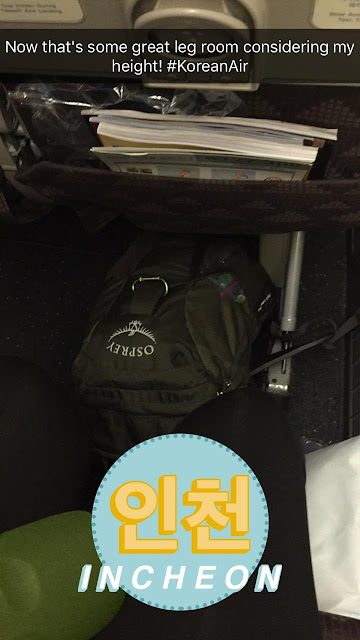 Never turn down free water.. or a hot washcloth. Yep, they handed me a ‘little white roll’ with tongs and warned “hot”. I assumed it was some sort of different snack and am trying to be open minded about trying things that seem ‘weird’. When looking around awkwardly trying to figure out what to do with this foreign hot roll, I see the guy ahead of me start wiping his head. Profusely. And his neck. At this point, I became concerned that I accepted some sort of snack that was so hot I would combust. Upon watching the guys reaction a bit longer, I realize he IS wiping his head and nexck profusely. Because the hot roll they handed us was a washcloth. Which felt amazing!! 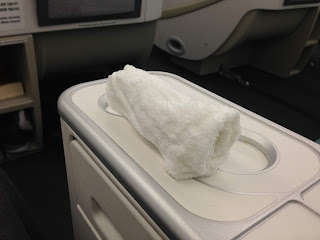 When downloading shows to watch on your new laptop for your flight…. ALWAYS double check to make sure they really downloaded. And are available without wifi of any kind. I thought I downloaded episodes of Criminal Minds, NCIS, Big Bang Theory, and How I met your mother… turns out after a 14 hour flight of watching the ONE show that managed to download.. I can pretty much read people like a book and know who they killed, why they killed em, and where to find out more info. Thanks Criminal Minds! Netflix in Korea gave even more random options! 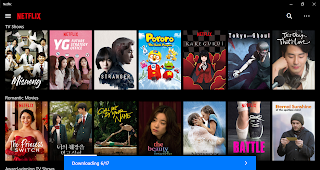 On the plane, there were 9 seats across on each aisle. I was the ONLY person who had ALL three seats to myself. HEAVEN. But, for a brief second, segregation also crossed my mind. LOL I kid. It was awesome to kick out my legs and lay down! No sleep happened, but at least I got to stretch out my ever-growing sausages along the way. 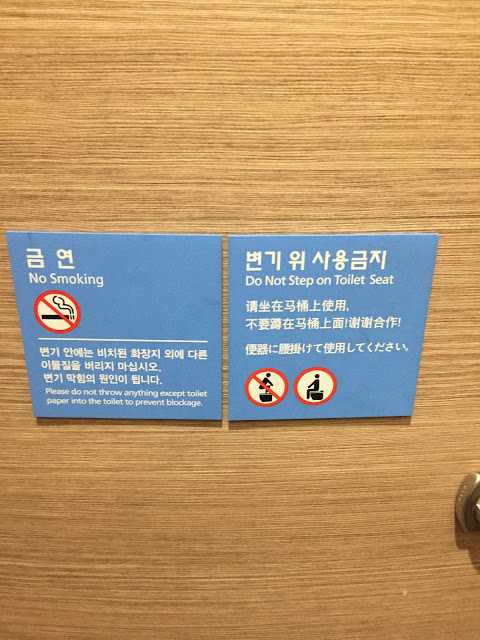 Never assume what day it is... We landed in Seoul, South Korea and my watch said 1:40am. The sun setting as the plane landed, told me that it was early evening. What day was a mystery. I got off the plane and expected a blast of heat, which was not the case. While it was not nearly as cold as MN, it was far cooler than I envisioned. And the clock above the gate said 4:40pm. And it did not say the same day that I had in my mind. Somewhere along the way I lost an ENTIRE day. Weird!


Never be cheap when trying to get to the hostel after over 24 hours of straight travel. I Landed in Bangkok just before midnight - nearly 1.5 days after taking off. The second I got off the plane it was INTENSE humid slap of heat right in my face. I was kind of prepared for that, but my body was not. I had to go through customs once off the plane and was sweating profusely. I couldn't get my compression stockings off fast enough.. and as I bent over to take them off, beads of sweat were literally dripping on the floor beneath my head. That's HOT. LOL. I waited for my bag for what seemed like  forever. I opened my Delta app to track the bag and it said my bag was in Chicago. PANIC ensued briefly, until i looked over at the baggage belt and there it was spinning around waiting for me. WHEW!!! I picked the giant lug up and realized I am WAY OVER PACKED. It is almost too heavy to carry. I was already sweating profusely and now, carrying around my pack plus my day pack.. there was no hope for me. I was a MN who left 19 degrees and arrived in 98 degrees. Literally. Talk about a shock to my body!  First thing I did was exchange money - USD for Baht. The I wandered down to the lower level of the ginormous airport and hailed a taxi. Only, you don't hail one like back home. You go to a kiosk and et a number, then find the lane that matches your number and wait for a car to pull into it. I had lane 42. I waited a couple minutes and the cab pulled in. I asked how much and he said 500B. Nope. I read about this business. That was overcharging. So like a first time rookie, who hasn't slept in days and just wants to be done traveling, I sent that car on his way. That goes to show me... when tired and hot and in need of sleep, I should pay ANYTHING to get to my destination. The next car pulls up and says 450B. Sold. And to be honest, if he had said 600B, I First can said 500B- I still would've went. I am tired. And hot. and DONE. The Cab ride from the airport to the hostel was 16 miles, and roughly 30 minutes. I dozed off a couple times on the ride, waking up when the cab came to a stop at my hostel. I paid him and checked in... suprt happy to be done traveling! I took a cold, amazing shower, and quickly passed out into a deep sleep that would last many hours...

My hostel may not look like much - but the beds are SUPER comfy, its clean, quiet-ish… and SIX dollars a night! Only 4 females per room - with AC, and private bed pods. Each pod has a huge storage locker underneath (with key) and one in the pod. The key card activates the AC and the light, as well as the cell charger in the wall. The street noise was minimal - add in some headphones, a sleepmask, and a fan app and I was MAN DOWN. 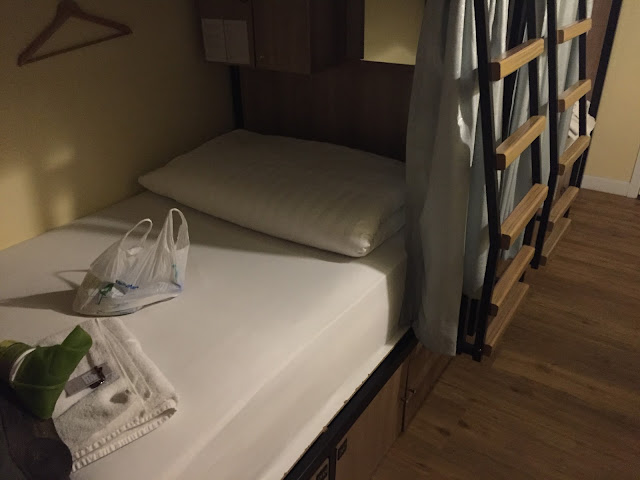 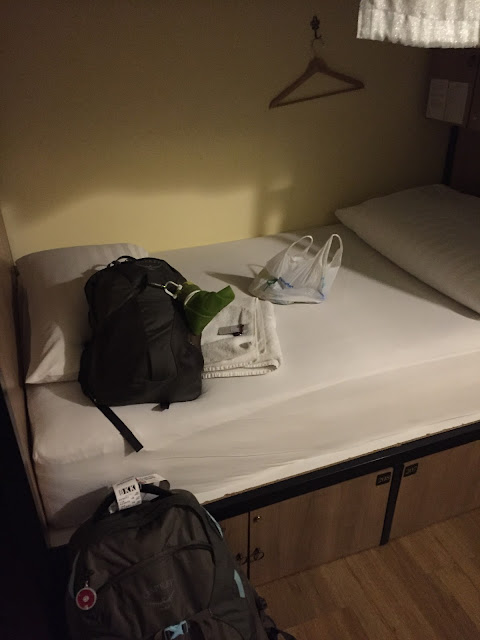 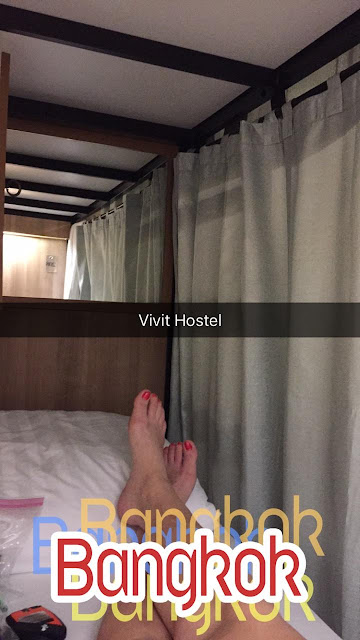