11am checkout~ its noon and I have no plans yet... MONKEYS! 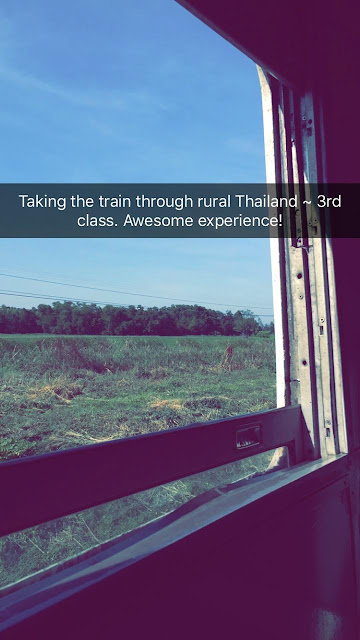 It was time to check out of the Early Bird Hostel. I awoke with a high number of mosquito and other bug bites, assumingly from the adventures on water and land the day before. (hopeful this is the case) Mind you, I am allergic to mosquitoes so I get bit once and it looks like an ant hill on my skin - red, significantly inflamed and itchy as heck. 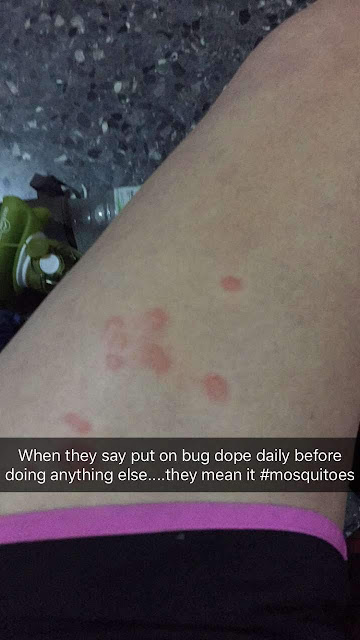 Note to self - mosquitoes are THICK here! Now I understand why the doc felt it SO important that I get 3 different vaccines for mosquito born illnesses + take and carry malaria pills with me for 90 days. And I thank her for that!!!! Check out was 11:30 - I managed to be packed and outside by 11:25am, still with no plan for where to go next. I had originally planned on doing that research the night before but was too tired. My motto is "Things always work out" and I was simply hoping that to be true this day. Since I was already 2 hours north of Bangkok, I wanted to continue north. The problem was transportation options were sold out according to many websites. Frustrated, and thinking I would have to go back to Bangkok to catch a bus or train back north to where I was already - I asked the girl next to me at breakfast what her plans were. She too was trying to go north and was told by the reception gal that she should just arrive at the train station as they often show all tickets are sold out, but that is not usually the case. So, hoping for the best, I asked her to get me a tuk tuk. And having none available at that time, she offered to drive me in her own car to the train station across town. Ever since I walked a billion miles in my stupid $1 shower flip flops, my back has been 'on the verge' of giving out. I have been gently milking it for 1.5 days... but today is still iffy, hence why I got a ride and didn't walk the nearly 2 miles. I have gotten pretty used to walking a lot and my body kind of craves it now. But, if I want to continue to haul my pack around, I best take it easy. I arrived at the train station and noted that zero signs were in English. Huh. I was hopeful that at least one human knew a few English words to point me in the right direction if nothing else. Turns out there is a whole info desk of (3) girls who are going to school to learn English, are in their 3rd year, and are there to help us Farangs. I told them I wanted to go north to Chiang Mai and if possible, I would like a layover stop in Lop Buri as I had read about the 'City of Monkeys' - where monkeys are like over bred dogs and mess with tourists by taking their glasses/hats/etc. Fascinated, I wanted to stop there for a couple hours to scope it out. I was super lucky to have gotten a ticket on the next train out - only 20 mins from when I arrived at the station. 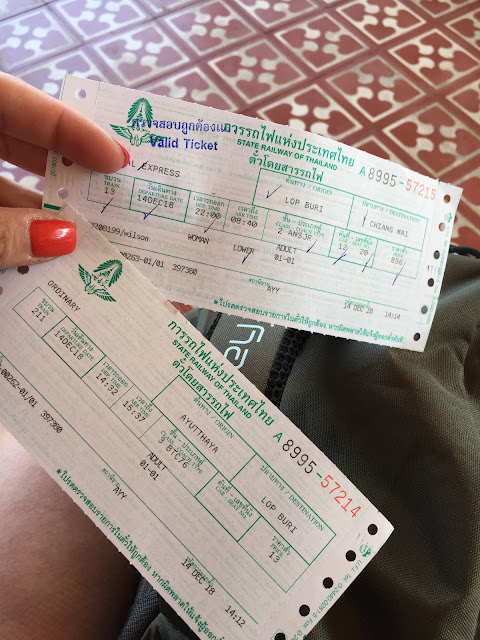 I was even luckier to have gotten one of the last SIX tickets from LopBuri to Chiang Mai on the sleeper train. So, looking forward to a 6 hour 'layover' in LopBuri I hopped the train. The first leg was on 3rd class train - aka the cheapest train option. No AC, just benches and open windows. EVEN BETTER! 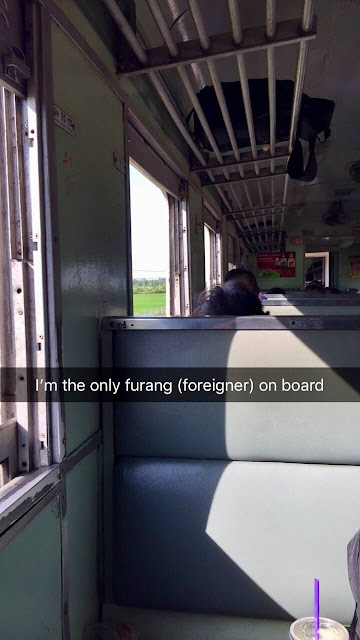 I was excited to see the countryside and get some sunshine. 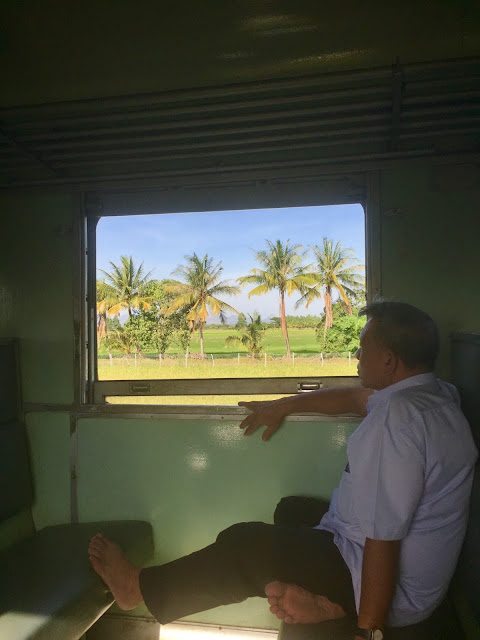 It was a gorgeous 1.25 hour train ride to LopBuri, where I got off the train and dropped my big pack off at "parcel" where I could leave my big bag for the day. Thank goodness for google - its the only reason I know anything on this trip and the only reason I know that something like this exists. Otherwise I Would be wandering around, big old pack in tow. 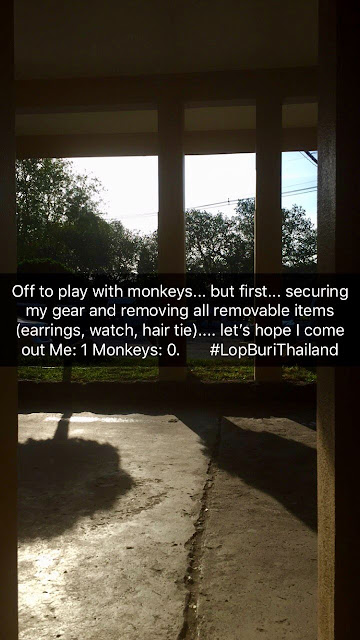 I wandered around, admittingly a bit timid to see this monkey chaos. I read that most monkeys were to the north end of town. I hopped off the train half expecting to see them everywhere. I walked several blocks past old temples and ruins, still no monkey sighting. I also read that it was best to remove jewelry, sunglasses, watches, anything dangling from your pack, including straps.. nothing to attract monkeys from wanting to eat your stuff...basically. 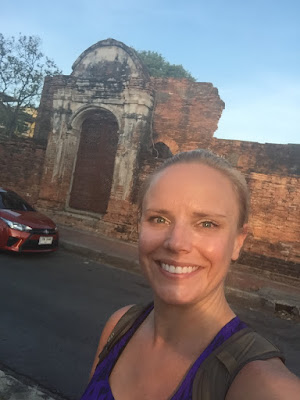 Walking down random streets, I suddenly, and I mean suddenly, FOUND the monkeys. Holy crap they were everywhere!!!! 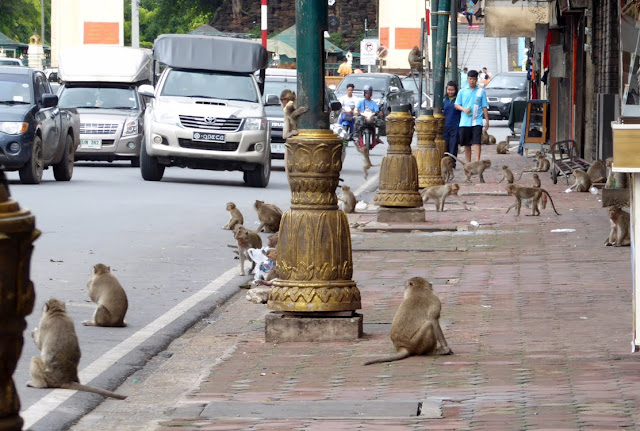 I was prepared to see monkeys - and read that they were everywhere - but it still took me by surprise! I stood on the corner of the street for quite some time, just watching the monkeys and watching as the locals just went about their day as though their city wasn't being held hostage by the monkeys. I was nervous to walk down the street - do I walk AROUND them? Between them? Will they go for my ankles? So I waited and watched how the locals interacted. They just walked like normal down the sidewalk. I still wasn't brave enough venturing forward so I waited for a group of locals and hopped in line behind them, doing what they did as we veered right, then left between and around monkeys. Everyone had a tight grip on their belongings, as did I. 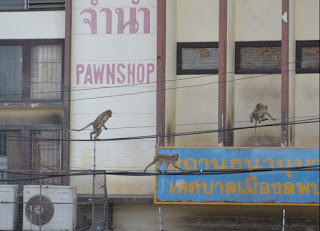 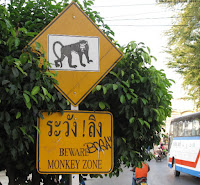 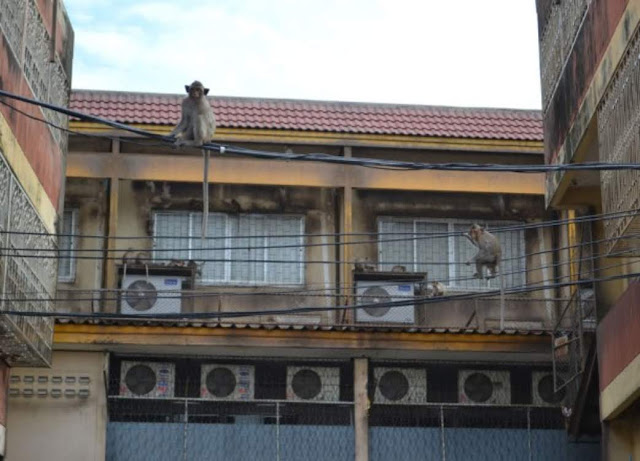 Monkeys were swinging on power lines, running up and down the buildings, scaling fences, perched on overhangs, and occasionally trying to steal street vendor food, which then got them either pinged with a rock from a slingshot, pinged by an airsoft gun, or thwapped with a stick. Others were simply banging sticks on hard surfaces which appeared to keep the monkeys at bay. 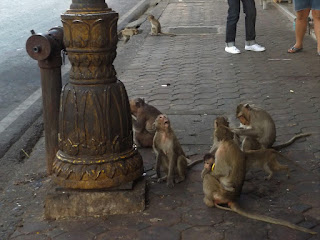 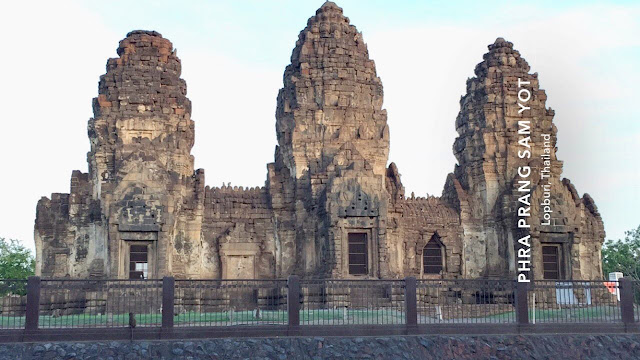 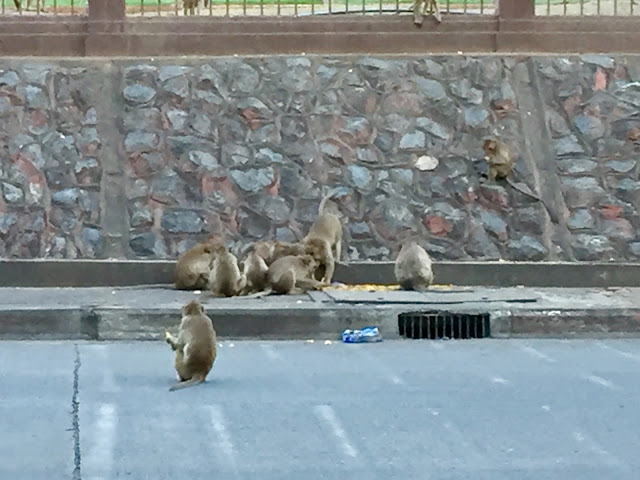 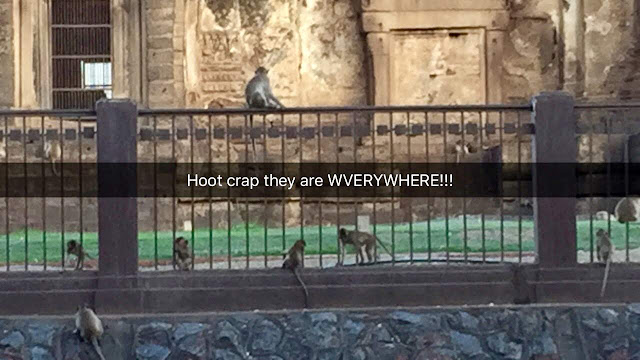 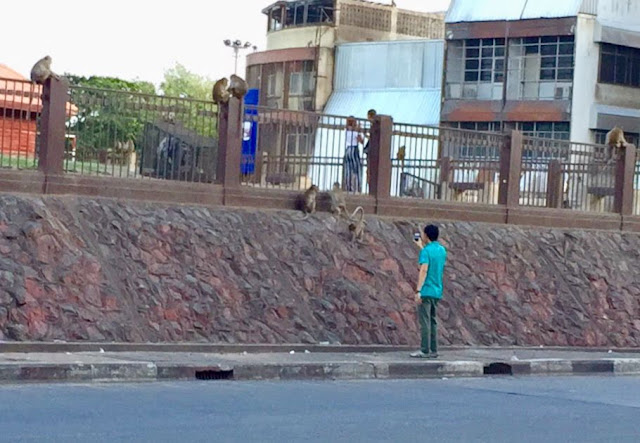 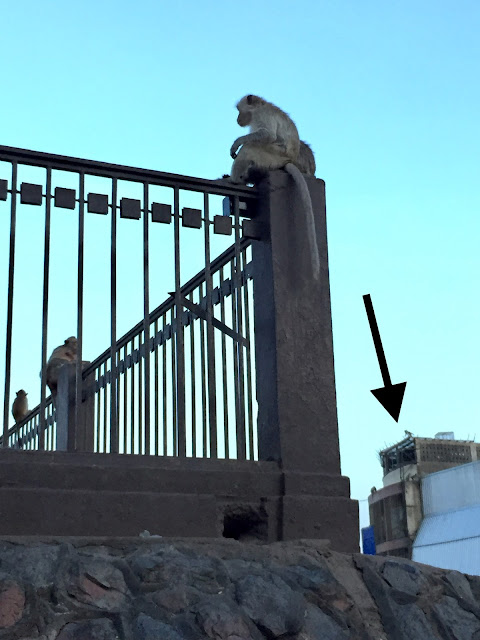 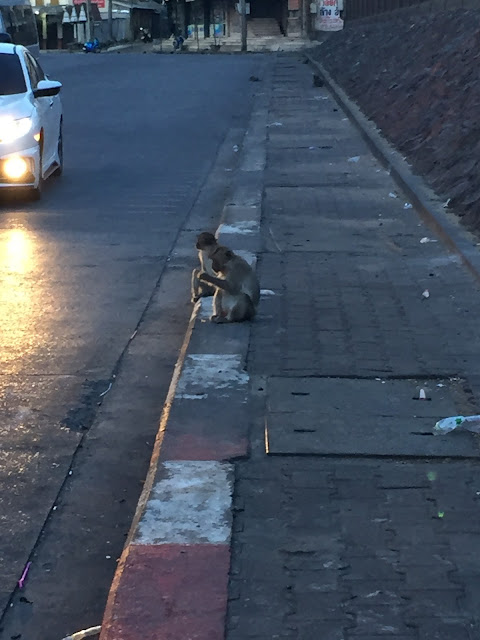 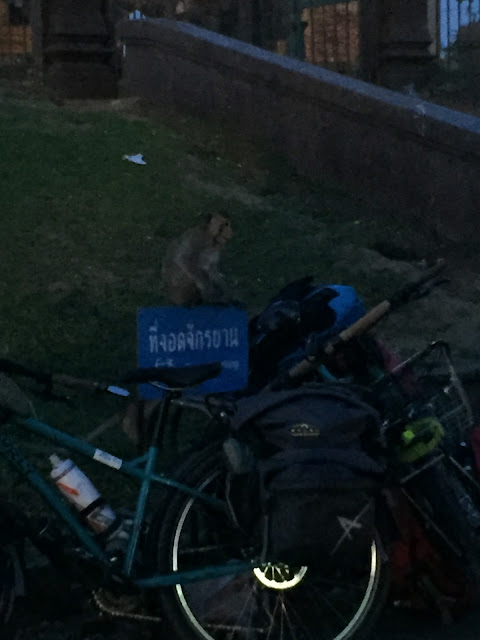 Suddenly, after being so entertained by watching the chaos, I was all alone in front of monkey temple. With a lot of monkeys. And suddenly very uncomfortable!!! I managed to escape without have a monkey jump on me but had to wait to dodge rush hour traffic - I made my way across the street from the temple and was so focused on the traffic and what was behind me, I failed to notice the huge family of monkeys' ahead of me as I barreled traffic and made it across . I was once again surrounded. And I went to turn left, where two monkeys were having an street brawl/argument. My options were now: walk between them (seemed like a BAD idea), walk behind them (where I would be up against a building should they move their fight backwards) or dodge into traffic to go around them. Figuring my odds were slightly better in traffic, that is the way I went And it worked. My heart rate was likely through the roof - I REALLY didn't want these things ON me. I have had three rabies shots and they ALL HURT - poked into the bat wing flap of my arm and they each stung for one whole day. I did NOT want any more of those!!

Making it away from monkey-chaos I was hungry and still had a couple hours to kill. I wandered off the beaten path to a small hole in the wall for dinner - where I ran into a couple from the previous days boat ride - what a small world!!! After dinner I realized I was feeling quite gross. Having not showered since yesterday morning... and being I was about to board the night train, I was facing a full 48 hours without a shower - and being in the heat, humidity, and monkey ish, I was definitely in need. The place I had dinner at was connected to a guest house. I took my chance and asked if I could buy a shower and a towel to use from them. YES!!!! 50B she said - I rebuttled with 30B and it was a success. I just bartered a shower for a dollar. And it was AMAZEBALLS!!!!!!

Next up, waiting for the 'midnight train' to Chiang Mai. 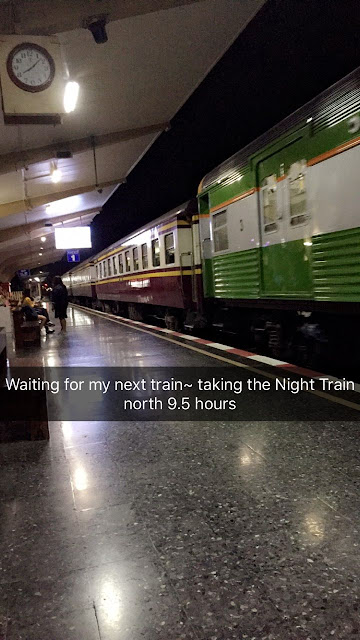 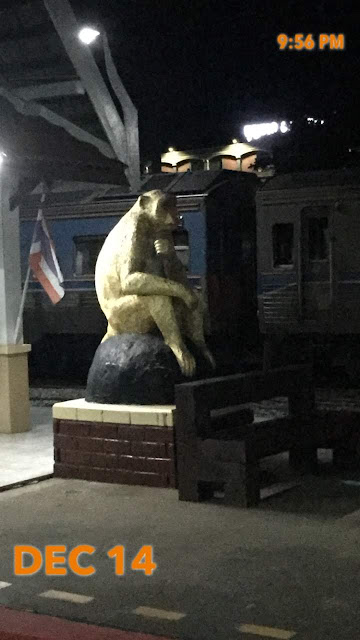 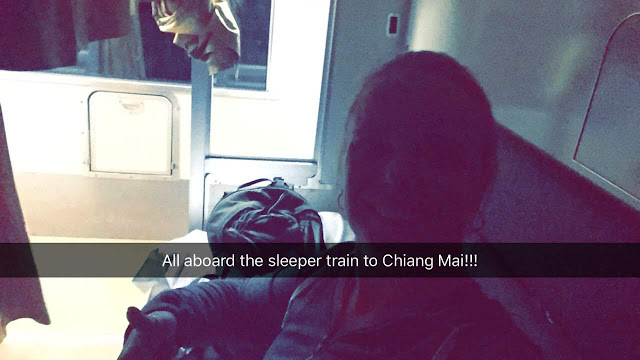 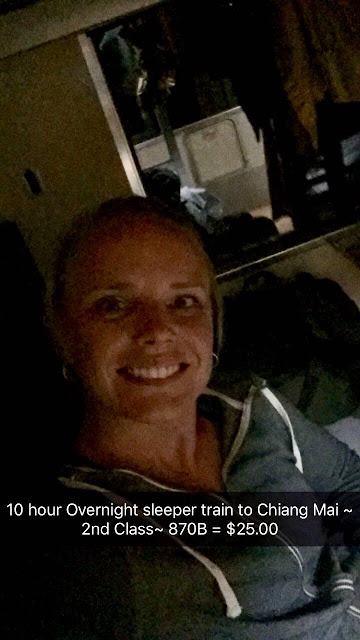