Many attempts at fun ~ a bus, a Palace, and success at Wat Pho (Not today - I am slacking at posting) This day in the hostel I saw the brochure for a Hop On Hop Off bus. I have taken a few of these tours and found them to be very helpful in learning a little about the city and learning the layout of the land. I went online to book a ticket and the website was down. So I googled it and found a ticket, went to pay, and bam. A NOT TODAY! moment - they only accept Visa. And that is the ONLY card I don't have with me. Except my bank card, which I had zero intention of using here as they charge a boatload of fees to do so, and I didn't want a card that was tied to my bank account directly. Well since that that was the only option, I entered the number. BAM. NOT TODAY! moment #2 - my bank immediately declined the charge and froze my account. Which I greatly appreciate from a safety perspective, but I woke up with minimal gumption and was losing what I did have, quickly. I texted the girls and JC and told them about my near defeat. All were on the same page - YOU ARE NOT A QUITTER. Bah humbug was my inner response. Then JC told me not to give up, and to use his Visa. Nonsense. I don't need money - I just need hope that SOMETHING will go correctly today.  Yesterday was a struggle, mentally. After yesterdays defeat, of sorts, I kind of wanted to throw in the towel and go home. Kind of. Sort of. But not really. I forced myself to accept help and used the Visa to book my bus tour and then I forced myself up and at em, and went down to the lobby and hung out trying to figure out where to catch the bus. I tried hailing a taxi but because it was Sunday they were few and far between so I just started walking to the bus start - which is way down by MBK - a solid 4+ mile walk. I don't want to say that I am USED to the heat and god awful humidity, but I am definitely used to sweating. All the time. It is my new norm. I was once hyperaware that I am a sweater - embarrassed to a point. Those days are now gone. Its just a fact of life here.  I just started walkin - no real destination, just out to see the town. I came across the Giant Swing - it was used WAY back so folks could swing high into the air to get closer to Buddha. The swing part itself is no longer there, but the posts that once held the swing are TALL. It was kind of weird - this place is usually bumper to bumper traffic but today - not so much. After a couple of miles of sensing something was different - I asked a local (first if they spoke English) what was going on. He said that the King was riding his bicycle around with the people today.  So roads are basically closed all day. I asked if he knew if the busses were running and showed him my brochure for the Hop On Hop Off bus. Nope. Go figure. All that trouble and now I cant use said difficult to purchase bus pass.

O well. I turned around and headed back to the hostel to devise a new plan. Sitting outside soaking in the sights and sounds around me, my new hostel roomie (from Germany) walked and asked why I wasn't on the bus. Explaining the situation, she asked if I wanted to walk down to the King's palace with her. Sure!

I had the pants (you can only tour a Wat - aka Temple- if you cover your knees and shoulders) but needed something to cover my shoulders. We stopped at a shop prior and I got this shawl type thing - all lace-y and dainty and super unlike me. Together with the pants I looked like a super frumpy human. We made our way back to the palace and saw the sign "Closed today for the King's ride". OF COURSE. Good grief, today is NOT my day to try things!


So we walked to Starbucks on the river front, sat, and bs'd about where we were each from and what we had both done so far.

It was cool to learn about Germany - from their mandatory 30 days off each year, to their free higher education, to their healthcare coverage and system. She works as a recruiter for a college in Cologne (no clue how to spell that) and said that it was really hard to recruit from the USA. I couldn't understand why?! If I had been recruited for free higher education in a foreign country, HECK YEAH I would have gone in a heartbeat!!!! But she said that the majority of folks she has tried to recruit from the States are seemingly 'afraid' of going to another country, especially to study. Total opposite of people from other countries who are always traveling abroad, like its just a part of life. I thought about that for a minute and its true. A lot of people are afraid to get out of their comfort zone in the States. And many just don't have the vacation time or the money. Which is kind of funny to think about, because she was saying that of all the places she has traveled, the US is one of the MOST EXPENSIVE places to go - hence why she has not yet gone there. Anyways - she was super cool to talk to and hang with.  We sat awhile watching the (what appeared to be anyways) rickety ferry boats come and go, 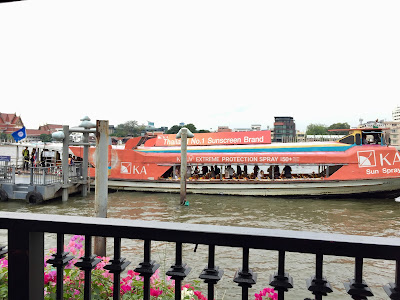 as well as a couple of rowboats that appeared to be very formal in nature - all the people were paddling in uniform and in unison and it looked like there was a uniformed 'leader' aboard each one - plus there were a few 'guard type looking' boats surrounding the row boats, we thought maybe it was the King. But the chair in the middle was empty. 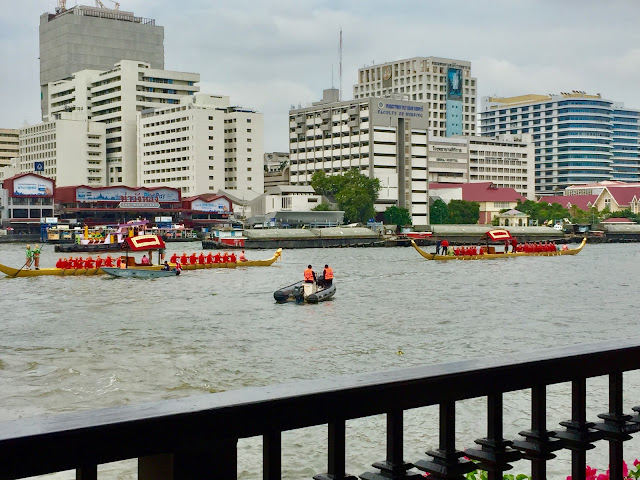 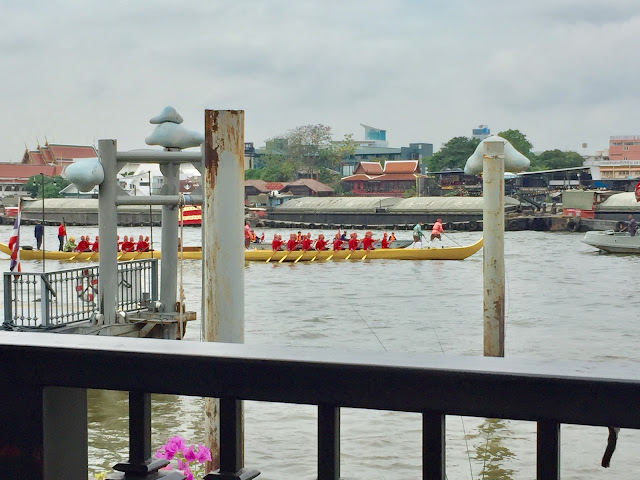 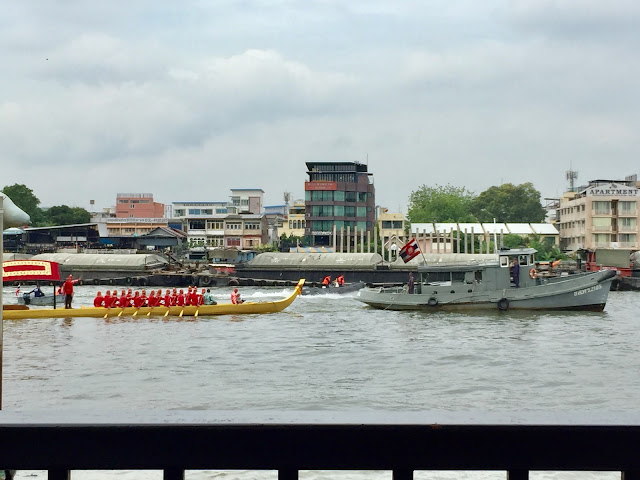 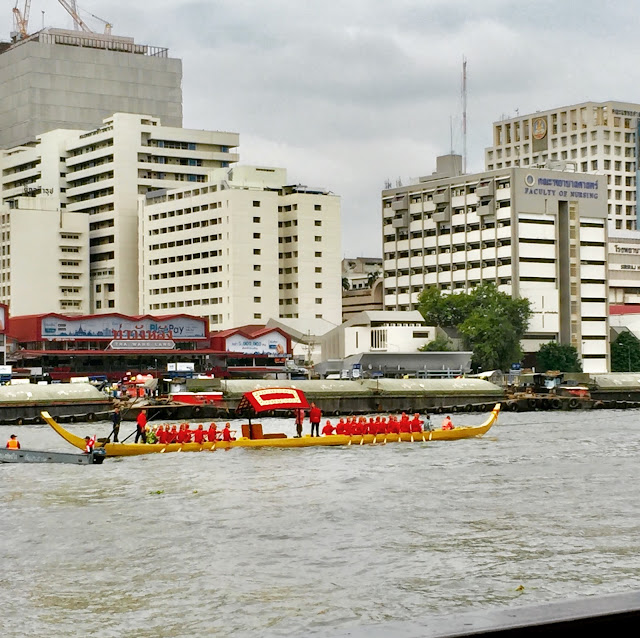 Random motorcycle chick on the sidewalk by the riverfront Shack on the very discolored riverway 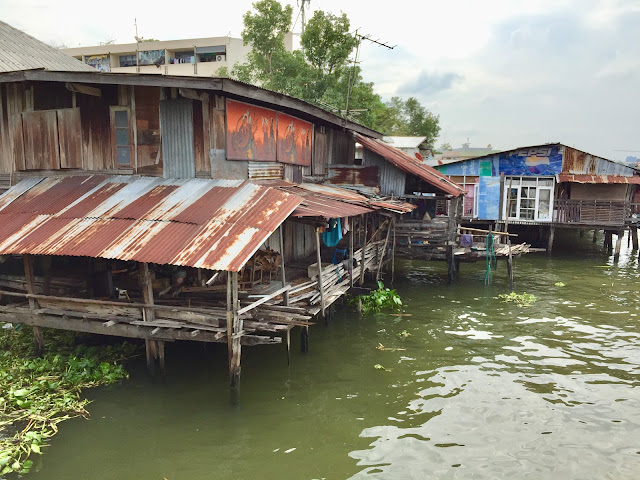 Next up: WAT PHO temple