Hostel SwitchAroo gone bad, a redo, and a Ladyboy show 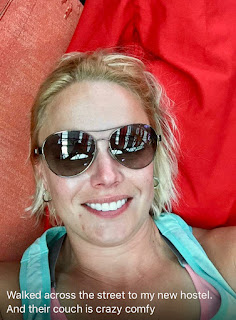 And when it came time to check in... I came to the realization that I MAY have misread something when booking the place.. Because when she handed me the room keys, I assumed we would head left, where I could see dorm room doors in brightly lit hallways, next to a bathroom and the shower room. From this angle, it looked promising. But then...we walked to the RIGHT of the check in desk. To get to the room, we had to walk around the towel station, down a 12" tall step onto plain concrete, around a dark, musty smelling open air corner area to room 'D' (also the grade I would give the place based on my experience)… The door was at least 1/3" away from the frame to the point the lock itself barely reached the frame abutment. The first thing I noticed was how DARK and DREARY it was. 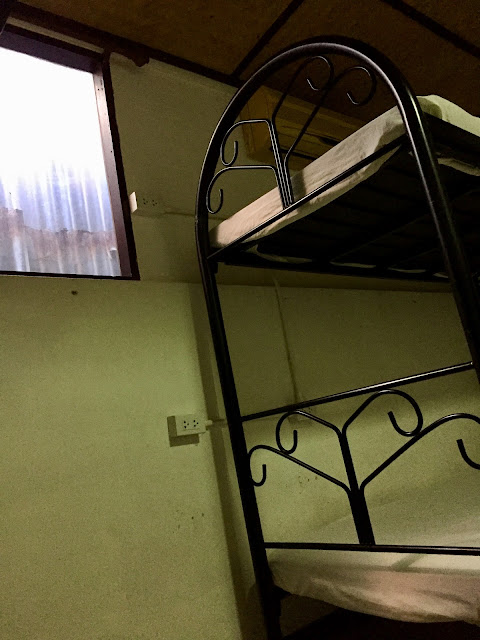 Considering its super sunny out, one would never know from the dungeon I was led into. The first thing the staff person did was plug in a LOUD, rickety, horrid sounding fan. Although I like white noise and I appreciate a high powered fan... this was more like a metal on metal, while shaking violently, and losing the fan blade screw... type of sound. And all it did was blow the MUSTY air farther up my nose, faster. The room was disgustingly hot. There was a little window - but below the ground, so it didn't exactly let light into the room. Nor INVITE light in. There were two plug ins on the wall - both next to the beds beyond my assigned bed. A lot of good that will do me. I sat on the bed after thoroughly inspecting it for anything that moved (on the bed and under the sheet). The bed made a crazy CREEK sound - the kind that comes out of scary movies. Only its my assigned sleeping area for the night. I laid down and the pillow was more like a sack of rice with a pillowcase over it. Rock hard, yet lumpy, heavy, and useless to rest my brains on. The 'mattress' must have been cut in half and divided between upper and lower bunk, because the amount of padding between me and the metal rickety bed frame was all of 3.5" at best. You know what they say about size. It really does matter. lol. As I sat on the bed, wondering what the he** I was thinking when I booked this place, I realized there is a door to the outside world (or lower level of the outside dungeon, either or) on the far end of the dark, dungeon like room. 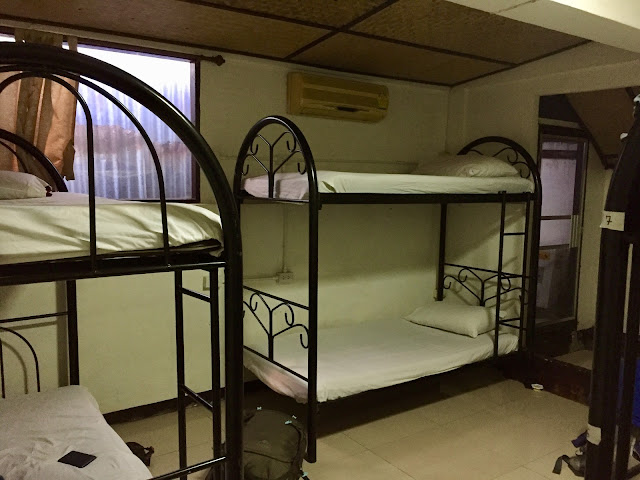 I walk over to look outside and notice (no joke) a 1.5" gap under the door.. to the outside dungeon area. And another 2" gap to my right, under the door that went into the musty hallway... which is open air aka outside.  When I combined all of the rooms 'highlights'.. I decided I could not stay there. I did not want to awaken to a surprise in my room, or even worse, bed. I could picture a rat or spider or whatever coming under the door (s) and I would lose my ish at that point. I hate throwing away money, but lets be honest. $5. The place gave me the creeps in the middle of the day, let alone I think I am going to get any sleep there? No. I ask the lady where the pictures on the website were taken and she said (happily) 'Oh, the nice wing over there' as she pointed to the opposite of where my room was. Note to self: READ the websites AND reviews. All of them. ALL.
Here is what was shown online: 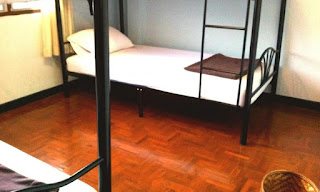 I went online to resume my search for a place in which I stood half a chance of sleeping in. I found it just down the alley way. I gather all my life on my back and wander down 4 doors, where as soon as I opened the front door, I felt myself relax and felt relief come over my body.  (Picture of outside of hostel is the  courtesy of the hostel website, I forgot to take pics here)! 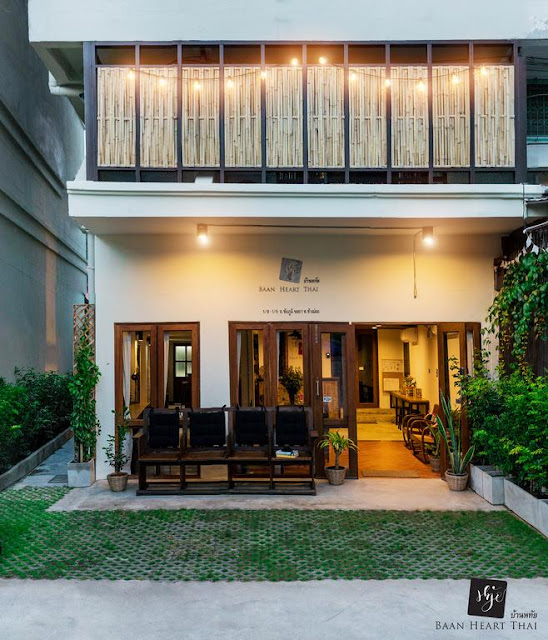 Yes. This place is TOTALLY worth $9. It was clean, it had AIR conditioning, it had security, a normal flush toilet, and did I mention it was clean and welcoming?? I was shown to my bed - one of 10 in the dorm room. Which I usually dislike a lot, but this was totally different. Each person had a big locker, a little locker, plug ins and USB ports in the bed area, and each bed had its own 'pod' with a privacy curtain. And air conditioning. It was heaven. I put my gear away, laid on the bed, and woke up an hour later! 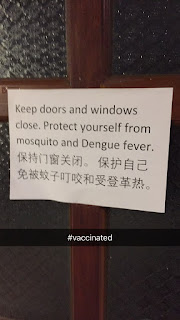 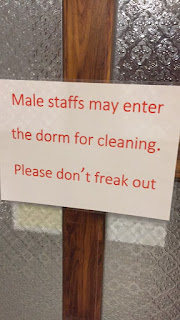 I got ready and walked around town for food. This required me to first walk past the awesome hostel, which eventually led me to walk down to the original hostel for Lady Boy Show night. But first - dinner. This little hole in the wall has amazing food! And a scooter parked in the back of the restaurant lol 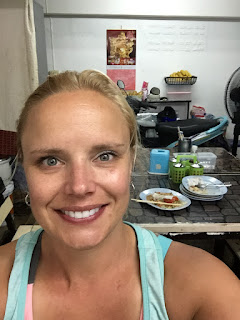 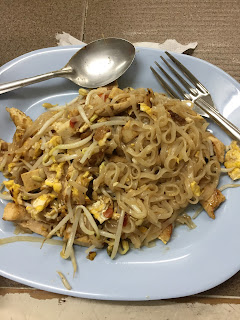 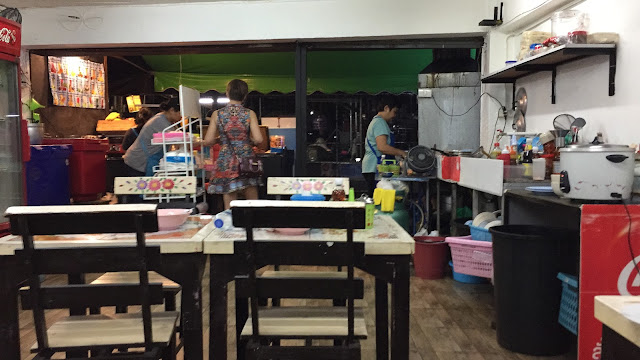 Even though I checked out of there, the staff and other foreigners asked if I would come back for the show. I originally said no.. I needed a night in. But then I had to walk o get dinner. And my options all involved me walking by said hostel. So as I walked down the alley, head down, and slightly to the left, I was still spotted and recruited to attend - yes, I caved to peer pressure.

It really wasn't that much effort on their part.. I am kind of sucker. It is nice to have met such great people and clicked with the crew as quickly as I did. It was kind of like home away from home - the first time this trip where I finally felt like I really fit in and could relate to the people in the hostel. And so, I grabbed a huge water at 7-11, walked back to the hostel after finding some food, and waited to leave for the show. The bartender asked if I wanted a drink in the hostel - NO! I still didn't really feel like going out, but yet I wanted to see the Ladyboy show. 50/50 crapshoot. At the club, there was 28 of us again, and we had reserved seating - the entire middle section of the club. We got drink menus and I felt I had to order one... and once I opened the menu, that was REALLY how many I would be having. I didn't feel like drinking at all and after seeing the prices, it confirmed my good choices. 250B for a beer. At the hostel they are 80B. The convenience store sells them for 50B.

I had just as much fun watching some of the hostelites REACTIONS to the Ladyboy show as I did the show itself. I guess it doesn't phase me to attend a show such as this - they are everywhere in MN and MN is fairly open to the community. Apparently this is NOT the case in other countries. There were several folks in attendance who had never seen such a thing. The guy next to me was nervously laughing and turning towards me every time one of the Lady Boys came on stage. After intermission, he mysteriously disappeared. They put on a good show complete with music, costumes, fire walking, waterworks, and crowd walking. 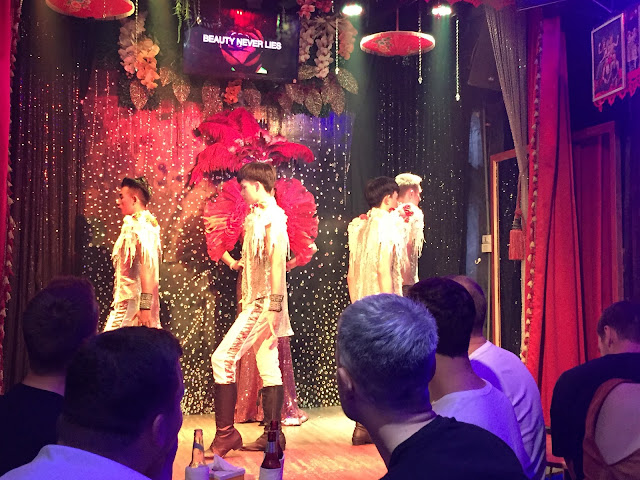 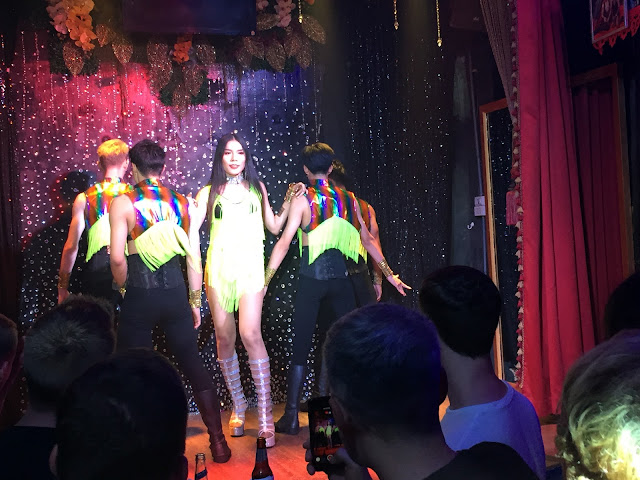 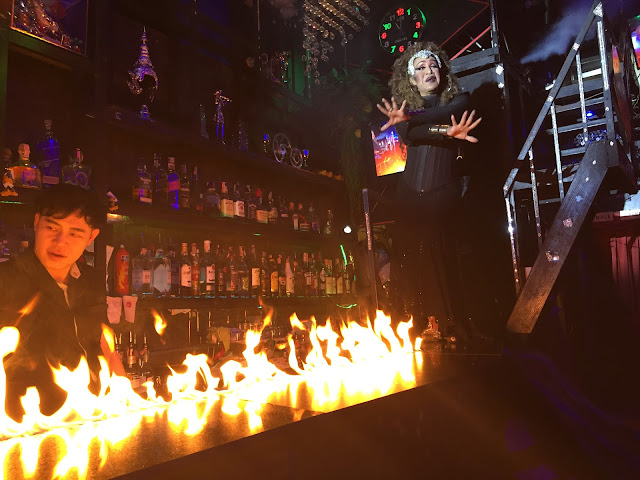 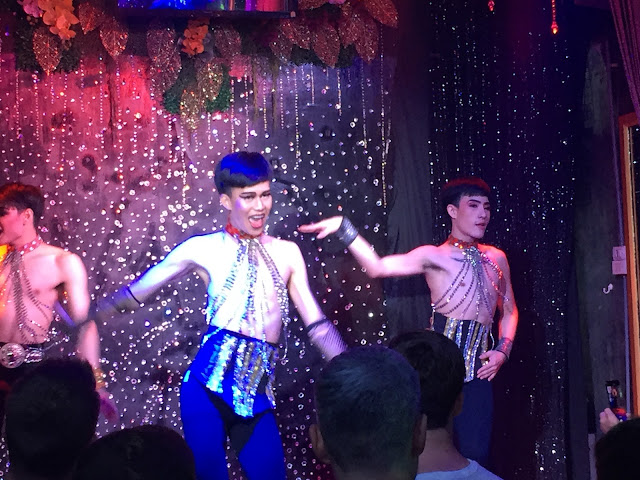 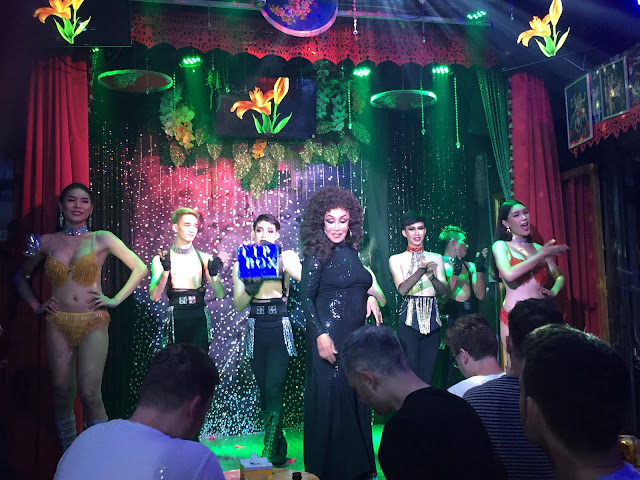 Once the show ended, the group made their way to the local 7-11 to grab a beer for the road on the way to the next bar. When everyone went into 7-11, I quietly and stealthy walked the opposite direction, and headed home for bed. #OldLady haha