MSP to Chicago to Seoul South Korea to Bangkok... Away I go!

- December 07, 2018
I love travel from the excitement of finding a good flight deal to book to picking the destination to learning what a new place had to offer ~ so much fun!!! What I am not good at however is the 'plan ahead' part. Like for instance I pulled an all nighter...which is normal for me to do before a trip however, I've been planning this trip for literally months and have been roughly 80% packed for the past month. I never know where those last few days and hours go before a trip. Or why I feel the need to clean the whole house before I leave. I'm leaving. That should be like a "get out of jail (cleaning) free card".

All packed for my trip, my roomie drives me to the airport to start my first leg of a total of three flights. 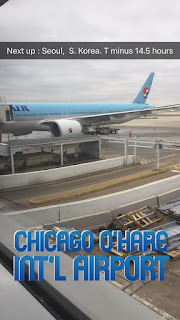 My first flight was a piece of cake - MSP to Chicago. Barely have time to put my stuff under the seat and we are getting ready to land. But that next flight.... uff da. I was dreading the 14.5 hour flight from Chicago to Seoul...  The longest flight I have ever been on was DC to Spain. I cant remember exactly how many hours that was, but I do remember how brutal it was. And I was in high school and on the trip with the Spanish Club - aka 10 of my friends who took turns entertaining each other along the way. This time, however, it is me, myself, and I. 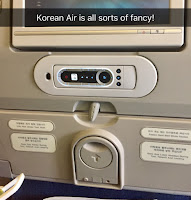 My layover in Chicago was just under 2 hours long. I had to go across the terminal I landed in, take a train, then another train, then go through security all over again once I hit Terminal 5 - the International Terminal. Then I waited patiently to board my Korean Air flight to Seoul, South Korea. 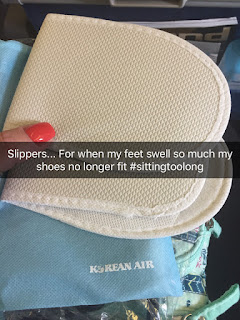 I am happy that I took Korean air...it was a very unique experience! The moment I got off the train at O'Hare at terminal 5 is the moment I realized I am now 100% minority. I I've never really thought twice about that - I mean everywhere I go there's some diversity but 90% of folks around me are the same race and our culture. It is truly a great experience to realize just how 'small' my world is in terms of diversity. From the adorable flight attendants to the free water upon entering the plane to the free sure mask, slippers, head phones and facial wipes... These are the little things that make me appreciate big things! Not to mention I was pretty much the only person to have all three seats to myself - either segregation or luck - I don't care which! 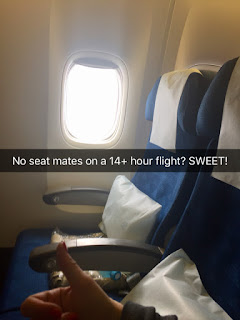 As they went through the safety schpeel - I was more entertained by what was going on around me than actually paying attention. But it didn't much matter because nothing was in English so had I never flown before, I would not have a clue what to do regardless. 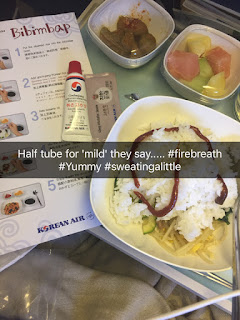 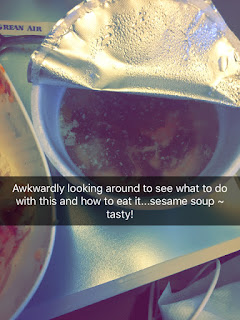 When dinner was served it was an option between Korean entree, beef entree or chicken entree. Figuring I need to get used to having the unknown, I choose the Korean dish. I got the tray and while it looked interesting, I had no idea what it was or what to do with it. Thankfully, it arrived with instructions on how to make it.  And thankfully the little sauce packet said "add half for mild" and "all for hot". I did add half.. and about 3 minutes later, I could feel the little sweat beads forming on my upper lip and on my forehead and while it tasted very good, my body was revolting in the spice factor! I managed to breathe through it though and it was really good! After eating, they dimmed the lights and I tried to sleep. I had ALL three seats in my row, after all! No sleep to be had - but I did manage to watch some flicks on my new fancy computer (thanks parents!) which entertained me for a solid 2 hours. Then I looked at the flight tracker. And cringed because I still had 12 hours of the flight to go and I was already ancy.


It was weird to be on the plane and suddenly have no clue what time it is, or what day it is.. which meant having no clue how much longer the flight is. My fitbit said the time at home, the plane ticket said what time I landed in Seoul, but not knowing the time difference was odd.

After another meal and another attempt to sleep, this one successfully sleeping a solid 2 hours.. I was So ready to be off the plane. My ankles were swollen like watermelons. The plane was hot. Hours and hours later, I opened the shade to see if there was sign of life, when I saw sunrise. or maybe sunset. I don't know, but I saw the sun, meaning it was some sort of daytime hour... which meant? I don't know - because I still have no idea what time or day it is, but then, as if the universe heard me- I heard the announcement for final pick up of trash... this had to mean we were close to landing!!!!! YAY!!!!   The plane landed and I stood and stretched for what seemed like an hour. During the entire flight I only stood up twice and walked... not enough! We de-planed and off I went into a totally foreign world of Seoul South Korea.  We had to re-go through security and they had BIG, I mean, BIG dogs at the end of the exit ramp and another set of BIG dogs by the re-entry area. Talk about intimidating. 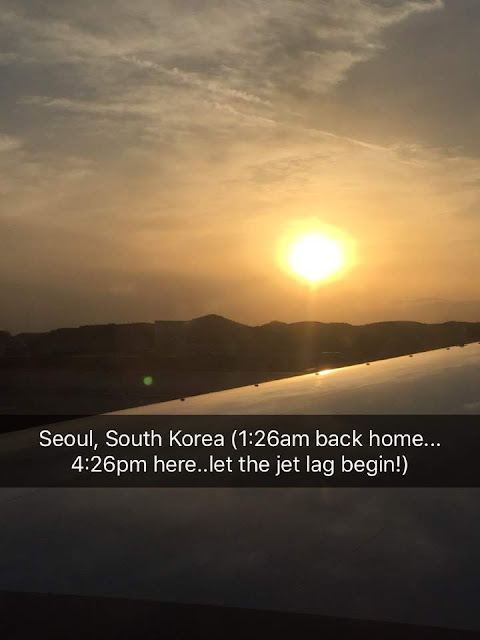 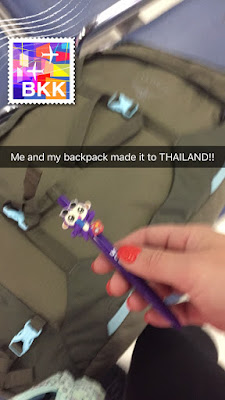 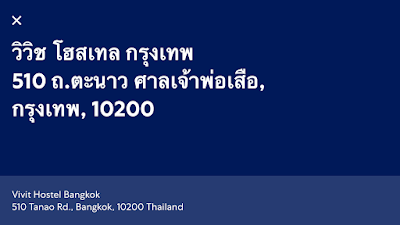