Up and at em early this morning to get a Headstart towards Eureka Springs.  We need to be there today and we are eight hours away. We left Amarillo and it was a relatively chilly out and by the time we got to The Oklahoma border we were boiling/sweating and super hot. It felt amazing but the same time we still had 6 1/2 hours ahead of us in such sunshine. We managed to miss all of rush hour in the major cities which is fantastic. We went through over a 1 gallon of water between the two of us, literally. It was quite sweltering so took a few breaks but at the end we just needed to force through it because we needed to get to eureka before  nighttime. 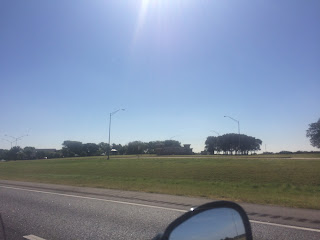 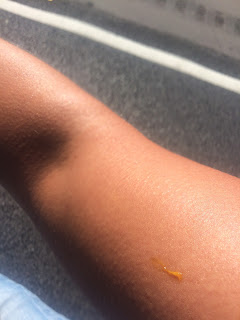 Bag flew open while rolling down the freeway ~ thankfully nothing went flying out. Midway thru OK, My eyes were so puffy from crying and running that I could barely see and left breathe.  Mad allergies were kicking my ass. Luckily traffic was cruising. We Gunned it on twisties once in area. 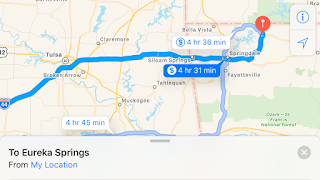 We headed Straight to legends bar to meet sheila. Had a cold
One and Met the guys~ then headed to Gas station and bought beer and put in bag, and then strapped the remainder on Shelly's bike.
Checked into hotel (Econo Lodge), made Friends with hotel check in guy with serious case of meth mouth.. always make friends with those who can see your bike! just in case. Exhausted from A boring day ride and constant wind.
Got to hOtEL and we adulted... aka we Did Laundry. Had a few beers. 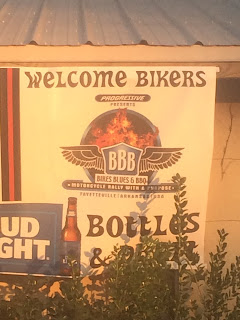 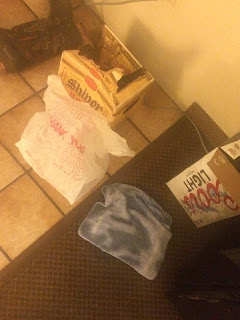 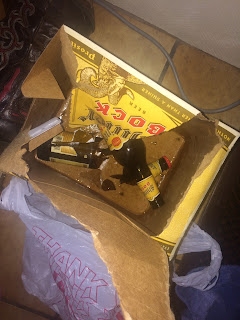 Shelly threw empty beer away into beer box which was not empty and also sitting on tile floor. 'Oops'. Glass and beer all over. We laughed hysterically not so much because it was funny as it was tiredness! 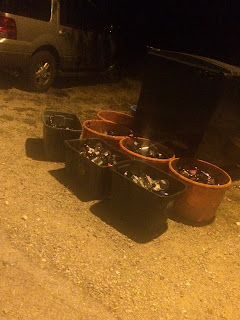 The 'before' bottle collection at Legends...

HeDed out to the bar for the evening. Ordered burger and if was still 101% moving. Ew. Asked to throw it back on the grill and re dude mocked me as his supervisor walked to him to say her burger was not acceptable.
Ha! So there young cook. Walked home late all uphill and in the humidity. Feels good to be back in ES!