Don’t bugs HURT? And other random gross facts about being a biker


Don’t bugs HURT? And other random gross facts about being a biker

When I picture being a biker chick, I think of sunshine, loud music, the constant purrrrrrr of my pipes, and endless destinations. But its not always that perfect. Here’s a look at a few of the gross-er sides of being a biker, in no particular order!


Bugs. There are small bugs. Big bugs. Pretty bugs. And Ugly bugs. Fact is, when they hit my skin, they are all the same level of OUCH and EW. Sometimes they hit my fingers, and that usually really isn’t comfortable feeling. Sometimes they hit my face – not as often as you would think thanks to a windshield. Sometimes they hit my arm, and then, as though they are trying to fly ONE more time, the force of the wind as I roll down the highway forces the bug from the area in which it dive bombed me and leaves a skid mark (a mixture of guts and sometimes blood) all the way up my arm. Sometimes the carcass of the bug stays glued on my arm, further baked on to my skin by sunshine… and sometimes the carcass eventually skids off me and back into thin air. Either way, its always gross and usually sticky. And often stains my clothing. And the bugs aren’t picky on where they meet their fate – nothing is excluded, not the skin, not the eyeglasses, not the helmet, not the boots. Definitely not the shins. 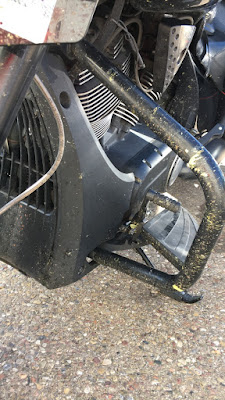 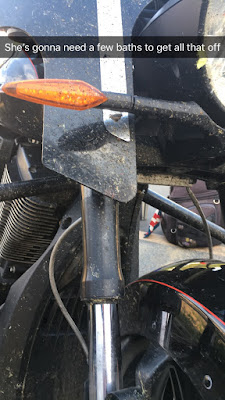 Roadkill. Knock on wood I can say that I have only killed a couple of small animals in the 12 years I have been riding. (RIP Squirrel, mole, and bird). And I have only mistakenly re-ran over 2 roadkill treasures in my riding career (both racoon parts). The worst part about roadkill is the smell. In a car, you roll on by unaware of the stench the comes with roadkill. On a bike, you ride THROUGH the stench literally face first. And I am no medical examiner, but sometimes I feel like I can pinpoint time of death based on the stench factor. Another lovely aspect of roadkill… is the other critters that feast on it. Sometimes, not only do I get a faceful of the smell, but if I ride too close to the roadkill, I also get a small spattering of flies and the ew that feast on the roadkill. I don’t know what’s worse. I always hold my breath while passing roadkill and try to swerve as FAR away from it as possible.  Oh, and never point too close to roadkill. Its polite to point out roadkill for the bikers behind you (with your foot).. but make sure you don’t put your foot too close… or the roadkill either a) comes alive or b) becomes double roadkill on your boot. Neither situation is good. Re-roadkill is DISGUSTING. I can’t say I have had that experience, but I have witnessed it. And it wasn’t pretty.


Roadkill playing dead but suddenly coming alive as I whip past it and point my toe out? SCARY. This once happened… There is always tire remnants on the road usually from semis who have blown tires. But once when there was a big chunk of tire in the road (taking up nearly the ENTIRE lane of the road), I went to point the tip of my cowboy boot out for Shelly behind me, when suddenly ever worst nightmare came true all at once. As I pointed my foot out, roughly 12” from the actual ‘tire’, said ‘tire’ LEAPT up at me, whipping its face and tongue violently at my foot and coming within inches of eating my foot off. Yep. That HUGE piece of tire… was a snake. And it was very much alive. I have never had such fast reflexes in my life and I didn’t know just how high I can get my leg from a sitting position, but it turns out I was lucky to be very flexible that day and my foot was intact after passing the GINORMOUS snake taking up literally the entire right lane of a back country road somewhere in the state of North Carolina I think. Scared the CRAP out of me… I can only imagine Shelly’s reaction as she came up on that scene as it unfolded. When we stopped shortly after, we met a local and explained hat happened in a ‘not very calm fashion’ when he informed us that “Ah! That’s a black snake. They are everywhere.” Not overly comforting of a statement. In MN, we have mini-snakes that won’t kill us. This so-called black snake wanted my foot, real bad. (example of a black snake below....ew) 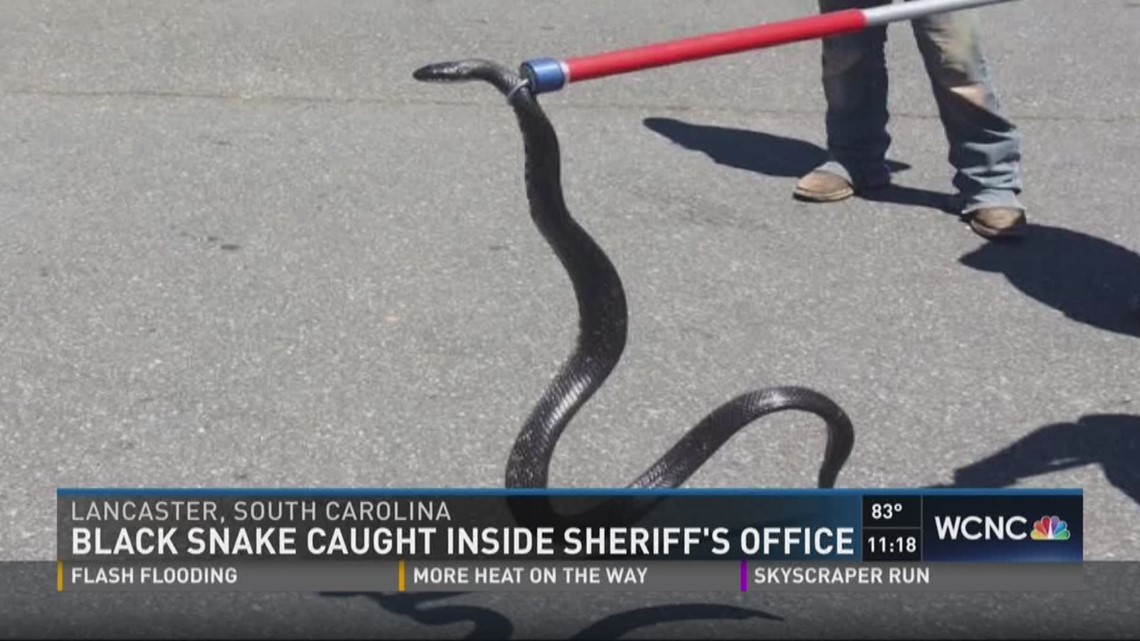 Birds. Birds and strong forces of wind are a bad combo. Add in a motorcycle also flying through their path, and now its a matter of sheer will of the bird not to die and of me not wanting to hit a bird, especially with any body part. Bugs hurt. Birds leave a much bigger mark. I have only hit one with my body while going down the road, and it was a near miss, so my helmet took the brunt of it and the force wasn’t too scary. But I swear birds see me coming and have a target out for me. They are constantly flying at me on purpose, then at the last possible moment, they swoop upwards. Sometimes, they do it on purpose. Other times I know it wasn’t on purpose because they poop on me instead, out of fear of nearly dying, I would imagine.

Rain- You'd think that rain would CLEAN the bike.. but it does the total opposite. And sometimes it hurts. And I never get my rain gear on BEFORE it starts raining.. because I always think that if I 'WILL' the rain away, "it will stay away". I clearly don't have that kind of superpower. So by the time I pull off the road, I am already wet. And being wet makes putting on rain gear a struggle. Think of trying to pull a pair of too-tight jeans over your body when you get out of the shower and don't dry off all the way. Yep, it's that level of struggle. Not to mention, rain gear is FAR from a fashion statement!
Once I finally get all the gear on and get back on the road, now vehicles are spraying me with rainwater... mixed with oil and dirt and grime that is being 'cleaned' from the road and subsequently worn on my face. 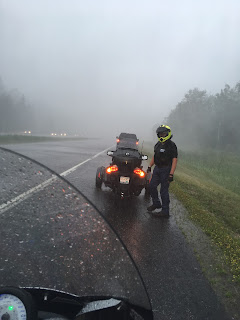 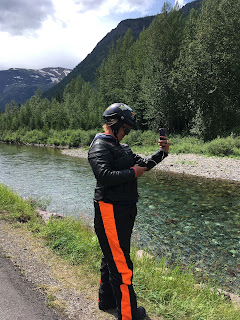 Passing vehicles.... especially big rigs. Not all big rigs are on the same level. There are enclosed semi's... they push me around a bit when passing, but no big deal. Then there are open semi's hauling gravel and the like... every little bump they hit spits out a handful of whatever they are carrying and some of it always manages to find its way to my skin. Then there are livestock hauling trucks. Living creatures poop when they are super scared. I would imagine being loaded into an enclosed, loud semi, and then bumping down the road with all of my friends in super tight quarters, with loud vehicles and motorcycles passing by, would cause livestock to poop more. And when their butts are backed up against the open, grated, semi walls that face traffic.... You get the idea. I can thankfully say I have never gotten THAT sprayed at me, but whenever I pass said truck unscathed, you can be sure I am very grateful!  RV's are super fun to pass too. Whenever they spray water at me, I can only HOPE its the clean kind.

So at the end of a long ride, I usually kick my gear off in the garage, to keep the ISH out of the house, and head straight for the shower. And even that is disturbing... especially hotel showers. Because hotels usually only have WHITE washcloths and towels. And I don't care how much soap is used, that poor washcloth never does look white again. And after a shower, I clean my ears. To think of ALL of THAT stuff getting into my ear - which would require it to sneak behind my helmet..... leads me to wonder what my lungs look like at the end of the day!!!

All of these things are fairly disgusting.. but TOTALLY worth every mile!!! 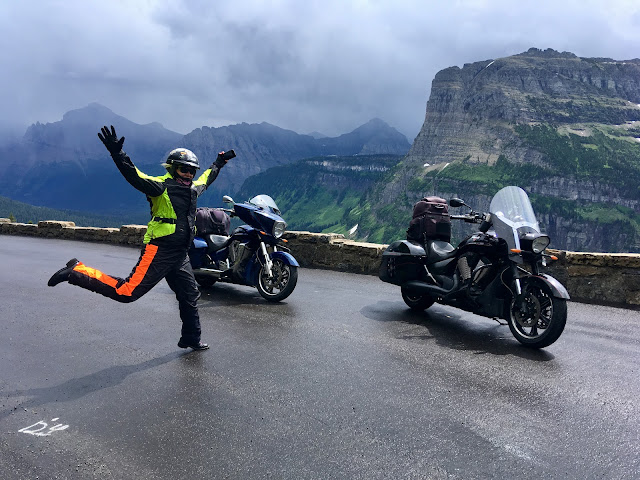