Nashville and back in 40 hours for Halloween? Challenge accepted! #Fail #Defeat 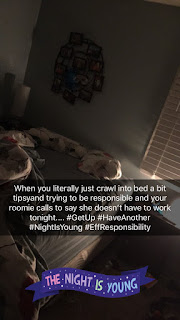 So I had a crazy idea that was crafted around  1:00AM Friday - after being peer-pressured out of bed to go to the local pub.. from there I came up with a GREAT idea to go to Nashville to party for Halloween with the guys...This meant riding from MN to Nashville on the bike, hanging out for Halloween on the main drag in Nashville, and then riding home. I booked the Nashville Music City Hostel at 2am for the same night...its prime location and super affordable. Doubtful any of my riding girls were awake/sober/willing, I sent out a couple of messages to the few that are just as crazy as I am asking if they wanted to rip to Nashville... in 3 hours from that moment... and then I packed the bike in minimalist ways. I checked the oil, the tire pressure, and went to sleep for 3 hours. 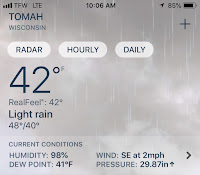 I woke up alert instead of groggy... which never happens on work days, weird! I geared up in all the layers - base layers, long johns, jeans, chaps... base layer, tshirt, long sleeve drifit, heated vest, hoodie, jacket, neck warmer, face mask, helmet with winter liner in it, winter gloves.. and off I went. For this time of year in MN, the weather was awesome - 45ish when I took off. I finally started seeing peeks of daybreak by the time I hit the WI border. Then, just as quickly as I started to see daybreak, I crossed the river into Hudson, WI and was greeted at the top of the hill by immense, thick, dark gray fog and shortly after that, I hit light drizzle. And falling temps. No big deal, I thought.. I kept on going - I was trying to 'beat the clock' so I didn't want to stop to layer up with rain gear. I have ridden through conditions that were far worse... but as I kept on riding, the temps kept dropping and the drizzle turned into light rain, turned into rain... and then one of the worst case scenarios happened: my heated gear gave out. Which was fine for the first 20 minutes...but then I started freezing slowly from the outside in... and once my core was chilled, I was cranky because I HAD to stop to figure out why my heated gear gave out. That turned out to be a long stop - I gassed up and then checked/cleaned all of the connectors from the battery to the adapter to the plug and play to the switch to the actual vest itself... No luck. No heat. So then I stood outside, shaking cold, but not wanting to go indoors where I would get warm.. then freeze even more on the way out again... so instead I stood in the parking lot of a Super America somewhere just outside of Tomah, WI watching YouTube and using Google trying to solve the mystery of why my heat went out. 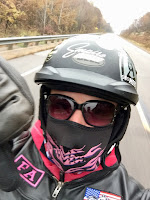 As long as I can keep my core warm, I can ride all day, through anything. But once my core gets cold...there's nothing that can warm me back up. After a lot of trouble shooting and a few phone calls... defeat started to set in. I'd been riding for 6 hours, which meant I "only" had 8-9 hours left and I'd be in Nashville. I checked the weather for a couple of towns on my route south, none had good predictions - the high in Nashville was only going to be 55 and there was still another 2-3 hours of rain in my future at the rate I was going.  Thankfully, the rain continued as I stood in the SA parking lot because it covered up my intense feeling of defeat and hopelessness which made my eyes start to tear up. Nothing like a perfectly good idea going bad..quickly. Over something that I felt I should be able to figure out and fix. No dice. Maybe the idea was not meant to be, and maybe it was a bit eager (weird!), but I had my mind and my heart set on Nashville and the fact that it wasn't going to happen did not sit well with me. Especially since I was basically half way there already. And I was going to see the peeps who I was looking forward to partying with. I felt wimpy. Felt like a quitter... and utterly defeated, I turned the bike in the opposite direction of where I wanted to go... and with my shoulders slumped and my mind still racing at possible solutions to this issue.. I headed back into WI and decided that if I couldn't make it to Nashville (safely and in good health), then I was NOT going to blast the freeway home. I would make the most of the day and mosy back to MN via twisty roads. 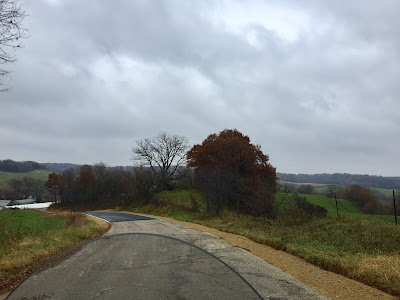 I was too cold to dick around looking at my phone at a map so I decided to head west, then north, then west, then north... until I made it back to the Twin Cities. I managed to find some pretty fun roads, had it not been for the rain... and the leaves that were all over the roads from high winds the day prior. Oh, and its farming season. 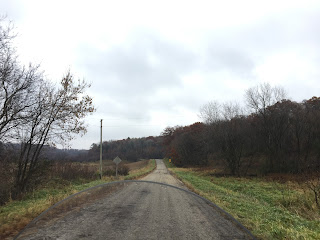 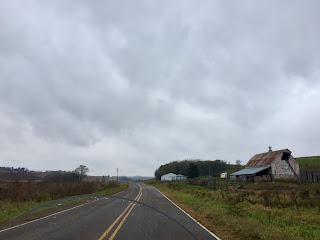 Which meant mud and field debris around almost every back country corner. So, it was not to be a fast cornering day, rather it would be an all around mosy back kind of mode. 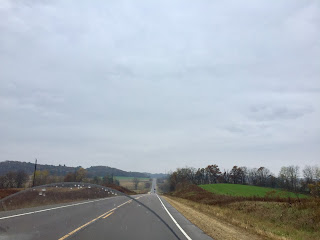 I managed to calm down and tone down my feeling of defeat 100 miles later after a ton of back roads and a lot of good music blaring on the speakers. At one point, I must have been jamming out and not paying real good attention at where I was going because I managed to do a 42 mile circle through the woods and over the hills.... it was great scenery, but I doubt that the hunters scattered through those woods were excited about my hot lap around! Eventually, the rain cleared out, the skies 'almost' cleared up and the temps at least stayed steady (versus dropping as they had been).
I was frozen to the core, but refused to just blast freeways back. I am not opposed to solid freeway riding when there is a destination to get to in a certain or least amount of time possible. But having no deadline, no destination other than home, and no commitments for the rest of the weekend, I took my sweet time.  Eventually I made it back to the Twin Cities - having rode 480 miles.. exactly half of the mileage to Nashville. Both happy to be home and now have a chance to warm up, and still being riddled with defeat, I took a crazy long hot shower and took a good, long nap. Sometimes plans don't work out. I always try to remember that there truly is a reason for everything, whether we realize it now or not. So, despite my excitement to rip to Nashville and back in under 45 hours... there must have been something that I was not supposed to see, do, or experience.. this time. 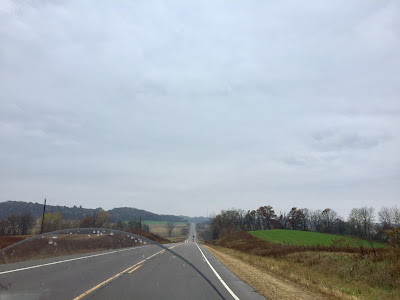 Well after naptime, I was once again peer-pressured into going out for dinner and drinks. These have to be the coolest bathroom doors EVER! 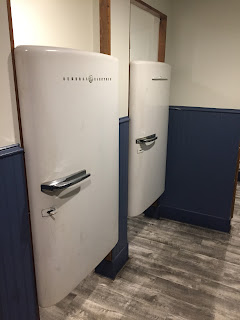 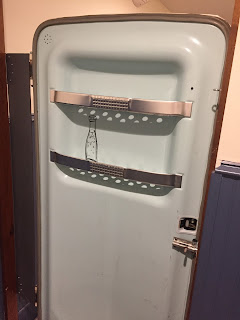