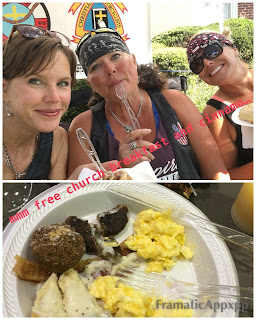 After a wild night in Fayetteville, we made it to breakfast at the Baptist Church on time (unlike last year!). The church puts on a free breakfast for bikers from 9-11 at the top of Dickson St. It is the most delightful spread you could ask for and it is all free. They had eggs, bacon, sausage, biscuits and gravy, and a cup of fresh fruit... OJ, milk, coffee.. and then snacks for the road to take with. Its amazing and we look forward to it every year! After that we walked down the main drag to check out some vendors and were persuaded along the back to stop for a homemade cinnamon roll.. hot and fresh and well, we all caved to peer pressure! 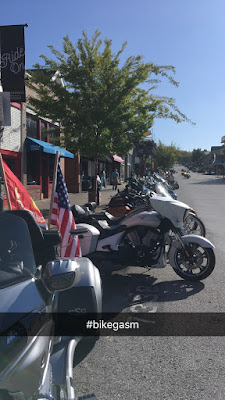 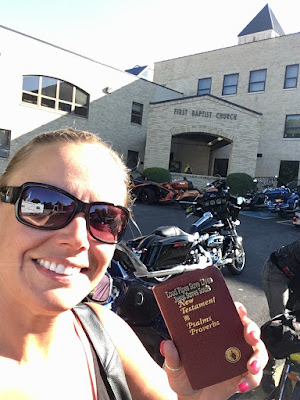 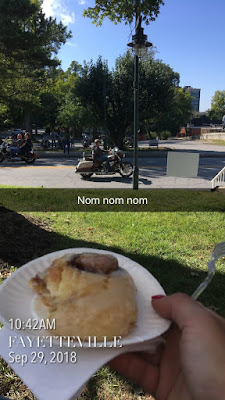 Then it's time to ride and hike the Lost Valley Trailhead. Naturally, I lead us the LONG way there for kicks... We headed south on 71 out of Fayetteville after wandering around Baum Village looking for the Indian Motorcycle crew that we see every year at BBBQ and Sturgis - turns out Indian was not at BBBQ this year. WEird... onward we went to get out of town and ride!  Shortly after getting out of city limits, Shelly pulls up honking like crazy saying she needs to pull over. With a ton of traffic coming up behind us and the narrowest shoulders on the side of the road ever, it was a quarter mile before we could safely pull over on a side street, which was downhill and blocked by a fence from the roadway, preventing traffic from seeing us. Turns out her saddlebag flew open and she lost several things along the roadway. We went to turn the bikes around and were greeted with a car trying to get our attention - they had seen the 'yard sale' begin and were able to tell us where some of her things flew out ('back a ways over the bridge' - super helpful!  We got turned around and a bike pulled onto the somewhat guarded side street - how they spotted us I have no idea, but the passenger was holding up a bag with some of Shelly's things. They had stopped to collect what they could - talk about amazingly good Samaritans!!!! Thankful for such awesome strangers, we got back on the road and started the hunt for her things. We saw her black shirt in the middle of the road - I pulled over and made a quick dash between bikes and cars to grab that. Next up we were on the hunt for her brand new tank top she literally just bought. She spotted it before I did and we spun around to collect it. After collecting all of her goods, kind of like an impromptu scavenger hunt - biker style, we were on our way. 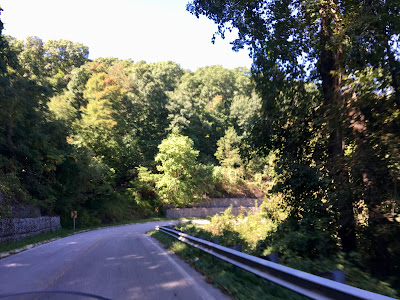 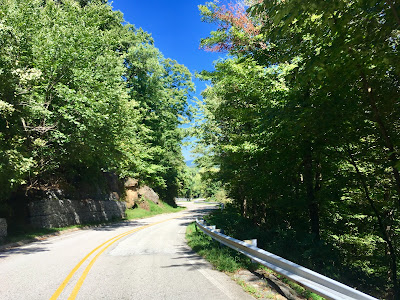 We stopped at a po-dunk gas station in Winslow, AR, to gas up before turning onto a very, very back road, and also took a breather to rehydrate and let the nerves of the scavenger hunt calm down a bit. The gas station accepted cash only and didn't have automatic pumps, but we timed it just right as there was no line - but when we finished gassing up, the line was coming from both directions at the 2 pumps in the place.  From there, we took a left on 38 @ Winslow. Over each hill and around each corner, I was fully expecting the road to turn to gravel. After several miles of this not happening, I picked up speed and had some fun on the corners. We were officially in the middle of nowhere - I think we saw 3 vehicles on the entire road. Just as we were getting our cornering groove on, I saw the dreaded sign... "Pavement Ends". Of course it does! 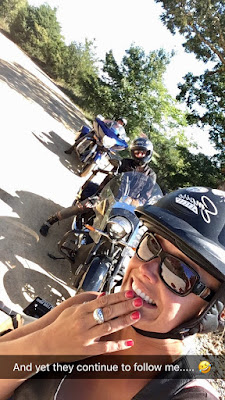 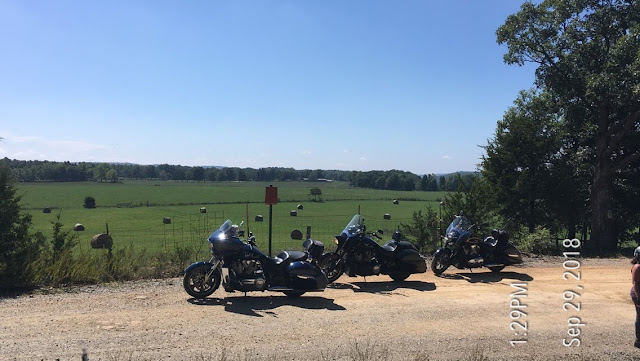 Well, not to be deterred by gravel, we continue on, slowly, to scope out the gravel conditions. It was a bit rough, but completely ride-able for our big bikes. We stopped at the top of a mini-hill on a corner that offered amazing views of the landscape and took some pictures. 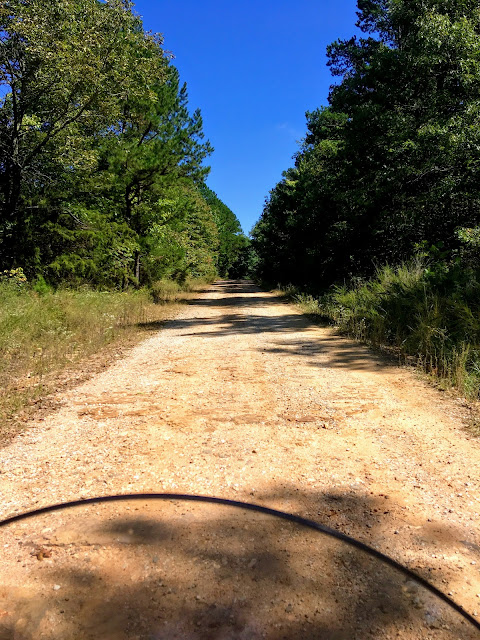 As we went along, the road got a bit rougher around each corner, so now we were in a full on game of dodge-hole. Like dodgeball, only instead of dodging balls, we were dodging potholes. On bikes. 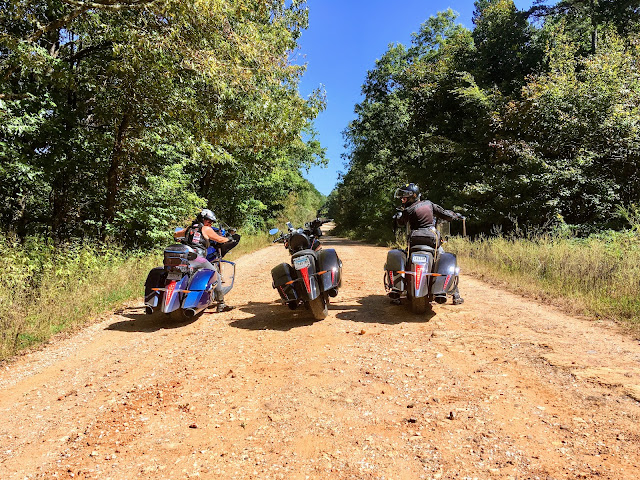 The gravel turned to gravel-dirt mix, in a rich red color, then at the bottom of one of the hills, the color drastically changed from red to white/grey. New gravel was put on the roadway.. and it looked a bit sketchy to ride on, even for me. I made the signal to turn around and we were all in some variation of doing so when one of said 3 vehicles came up on us. I was on the left side of the roadway turning around, the girls on the right, so the truck weaves between us and stops at my bike. He said 'Ah, you girls look hardcore - you can totally get up that hill' they had just grated and the new gravel top was only as far as the eye could see.. to the top of the hill. 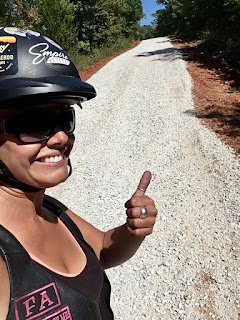 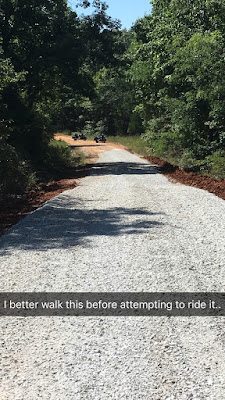 I was skeptical, and while I wanted to take his word for it, I decided to hop off the bike and walk the fresh gravel just to make sure it wasn't so loose or rough that our bikes would wobble or slide. The gravel was deceiving - it looked super loose and like it was a few inches deep of rock... but it was fairly solid. I walked to the top of the hill and decided we could ride up it.. there were a few iffy spots so I told the girls to stay directly behind me. Unless I topple over, then don't follow me ;) 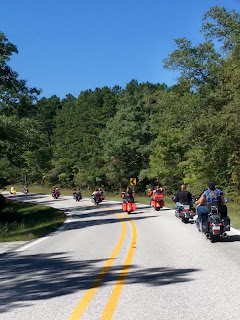 Onwards we went. I am glad that local was there because we would have otherwise turned around and missed out on another amazing road leading to expansive views of Arkansas beauty.  AR38 turned into Sunset Road, then into Brannon Mtn Rd - and on to 295. Lots of fun corners and hills to ride around and over. As I said, we literally took THE LONG WAY to Lost Valley Trail - which was 100% worth it! We took a right on 295 to --> 16  --> to 23/16  --> 21 North. On 21 north, we got behind our first large group of bikes - it has been surprisingly quiet as far as traffic goes this week, so when we got behind the 30-40+ bikes, I assumed we would be going 20 miles per hour for the remainder of our route. I was happily wrong - the group was large, but this was not their first rodeo and they maintained decent speeds, even on corners. That was a nice surprise! 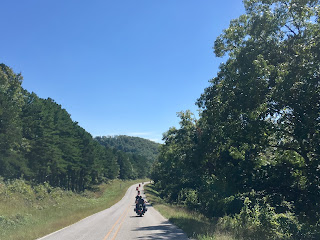 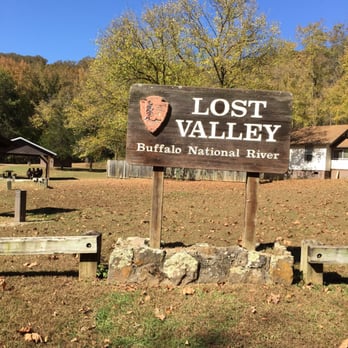 We stayed behind them for several miles until we  finally got to AR  43 east which would lead us to Lost Valley Trail on 5094. We stopped at a wayside rest type pull off to pee, hydrate, and check the map to find this gravel road we were looking for. We had to be close - the stretch of 43 between where we turned and the next town was fairly short. We started back on the road and instantly passed a gravel looking road, and when I turned around to see what the sign said, sure enough, we were there! We whip around and head down the road to the trail head. From Ponca, go south on Hwy 43 about 1.5 miles to the paved turnoff on the right, which is marked with a sign.  Meander back about 1/2 a mile to the trailhead parking area

We were told to hike this trail by a local - and he/she did not lead us astray! It is the most popular hiking trail in the national park, as well as in the state of Arkansas. 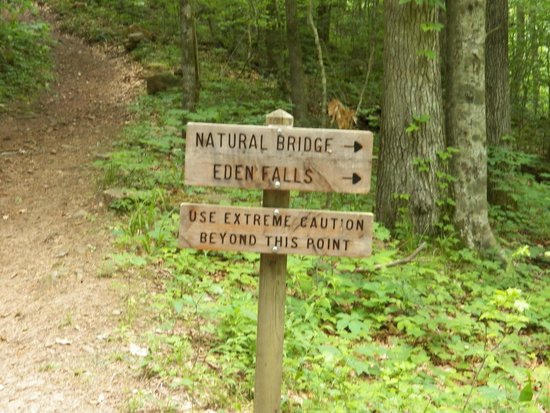 According to the website "
the box canyon which forms Lost Valley was probably once all underground and that the large bluff shelter (Cobb Cave) and small underground cave are remnants of that single underground cavern" The trail is awesome and is worth the two hours it takes to hike round trip.
https://www.buffaloriver.com/pages/lost-valley-trail/ 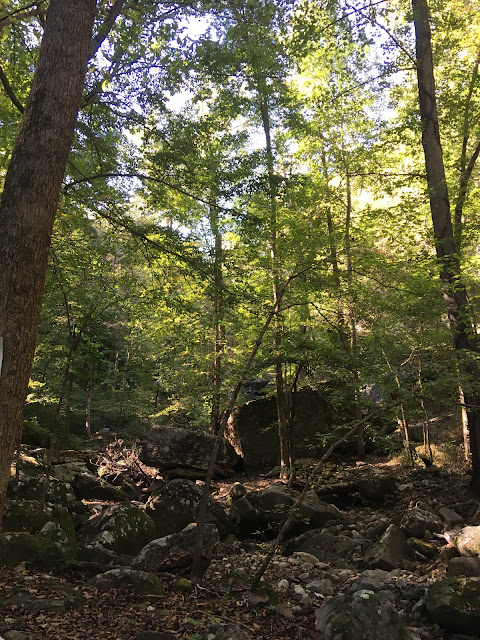 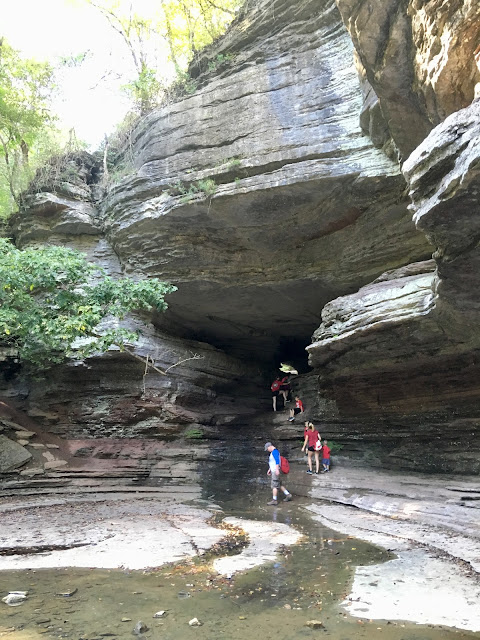 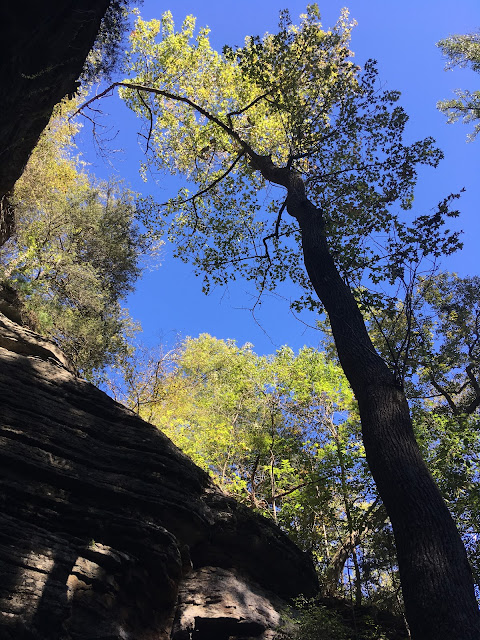 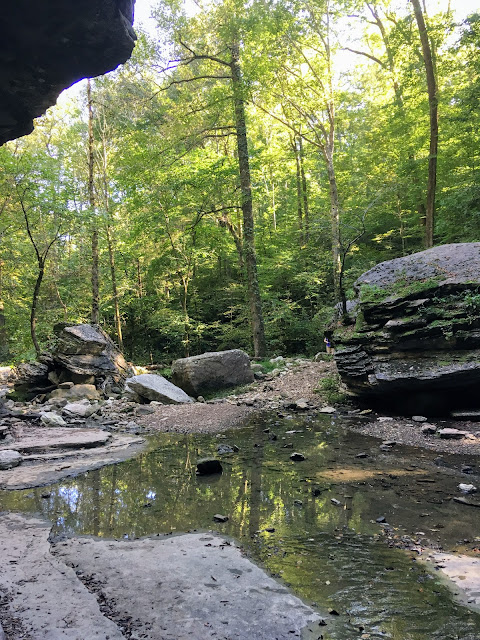 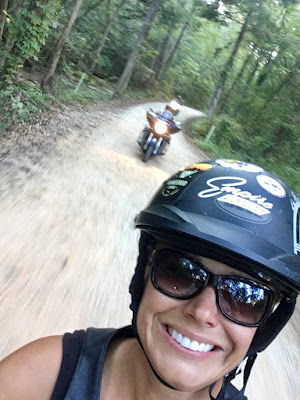 Exploring Lost Valley Caves
Cobb Cave is actually a giant bluff shelter and gets its name from the Native American (likely the Osage) corn cobbs that were found at the site by a University of Arkansas archeology team.  Continue up the hillside from Cobb Cave and you'll find the entrance to the small underground cave, which is about 50 yards long and the perfect introduction to what the inside of a wild cave is like.  Be sure to have two flashlights with you before entering the cave.  To find it, cross the creek coming out of the cave's entrance and look for a small, narrow opening on the other side.  Please exercise caution at the mouth of the cave as one side forms a waterfall ledge with a precarious drop off.
As you enter, stay to the right (left requires you to crawl, but winds up at the same place) and follow the narrow corridor back to the waterfall room.  Taller folks will need to stoop here and there in the corridor.  Once you're in the watefall room, it's fun to turn the flashlight off for a few seconds and give everyone a chance to appreciate just how dark a cave can be!  (Just make sure you have a good grip on the flashlight when you do and keep your finger on the "ON/OFF" button.)  Go back the way you came, staying to the left.  Also, be sure to have everyone watch for bats that may be hanging overhead.  Don't touch, but rather enjoy the up-close-and-personal opportunity to see a bat handing upside down this close to your head!

After our 2 hour round trip hike, complete with rock climbing, spelunking, and playing around on the cave ledges, we head out back to Eureka Springs - pushing our luck with daylight. The stop and the hike were well worth it! We are all sweating in the humid Arkansas 85 degree weather.. but definitely not complaining!!!
We took the fast route back to ES  21 - 412 - 127 - 23 , went to our hotel and showered up before heading out for the night to meet some friends from KC at the Cathouse!