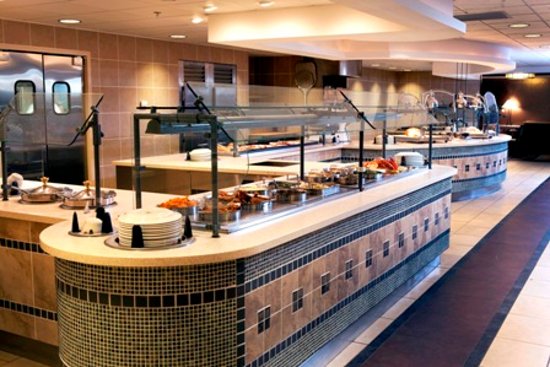 It's definitely getting busier around Sturgis for the weekend! Constant purrrrrrr of pipes makes me happy. Got up and rolled to Deadwood for breakfast @ the Silverado casino - they have an amazing spread that is great for soaking up last nights alcohol.. but due to us being slow, getting behind a long line of slow bikes, and just plain bad luck, we just missed the breakfast buffet we had all been waiting for. Bummer. Lunch it is. But there's that twinge of sadness because when I have breakfast on my mind... lunch just doesn't cut it. Fortunately, all I had to do to 'get over it' is remind myself that my food to alcohol ratio is WAY off so far this trip and food is in high need before riding! 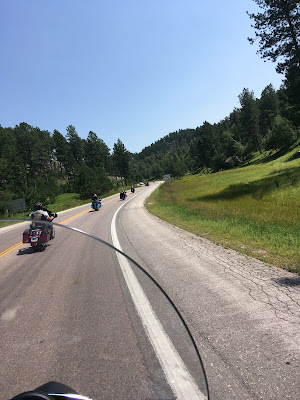 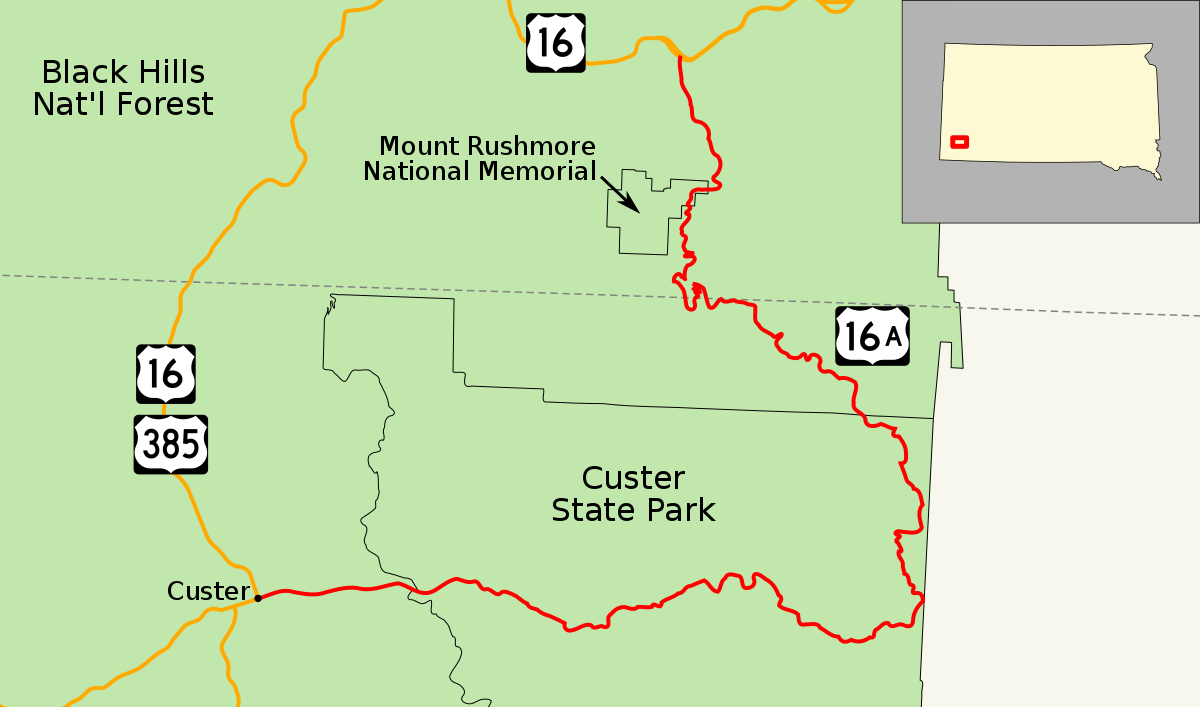 From Deadwood we headed out towards Custer to hop on 16A and play on the corners on Iron Mountain. Lots of switchbacks, corners, wildlife, and bikes. Iron Mountain Road starts at Custer State Park and goes to Mt Rushmore through the valleys and over the mountains, eventually connecting to Peter Norbeck Byway, which is another 18 miles of curves and scenery. Iron Mountain Road Itself is 17 miles long and has 314 curves, 14 of which are switchbacks.  The road was built with a ton of curves and switchbacks to slow people down ‘to enjoy the beauty’ of the Black Hills as one flier stated. There are some cool things along the road including three wooden pigtail bridges, 2 one lane tunnels that showcase Mt Rushmore in the background, and two areas in which the roadway is split into one way’s – that swerve and weave through the Black Hills forest. It is a challenging road for even seasoned riders, which is what makes it so much fun. 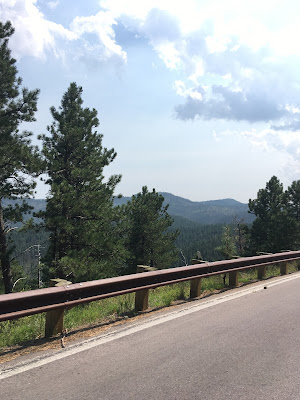 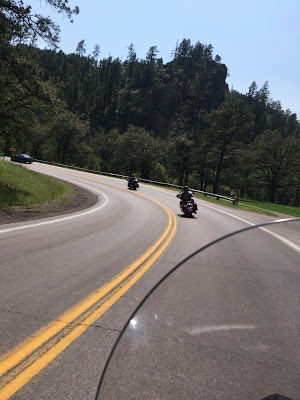 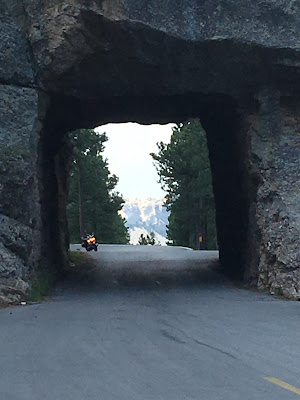 We stopped at the usual places to be tourists - one of which is a tunnel that you can see Mt Rushmore through - its a pretty cool view. We were stopped to take a few pictures when I wondered how the view might be at the top of the rock tunnel....

Not one to just 'think' about it, I start rock climbing in my zero traction Ariat boots in search of a great view. While there were a couple of times I was a smidge concerned at how the heck I was going to get DOWN from said rock climbing escapade... I figured I would worry about that on the flip side - so I continued to climb and crawl and pull myself up the rock wall to get the perfect view from atop - after several minutes of difficult foot placements I was successful (and winded… and sweating profusely).  But I made it and at the top of the climb was #Merica!   I was not disappointed with my view from the top!!!  I look so little up there! 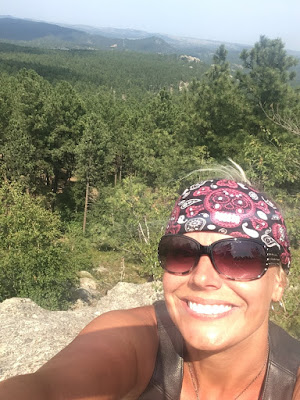 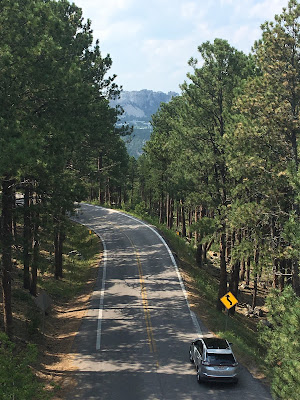 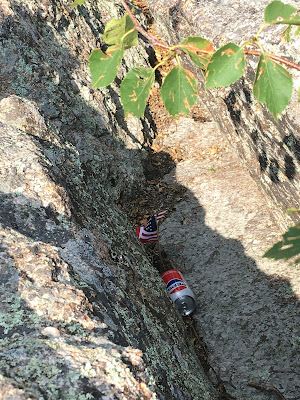 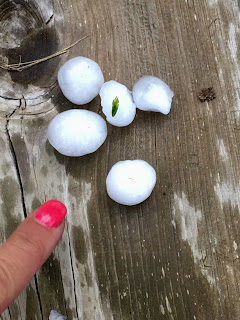 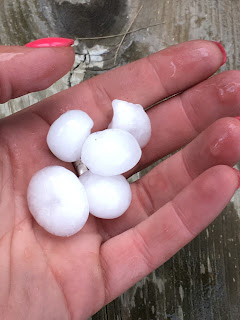 We wound our way back towards Sturgis after a solid day of riding through much of the best parts of the black hills - time to relax, have an adult beverage or two and figure out where we would head to tonight. But first, in natural South Dakota ways - we had to wait out a hail storm - the hail was decent sized and hurt quite a bit when hitting the top of our heads - Sheila grabbed the trusty Styrofoam cooler lid as protection from the beasts. Some folks were quickly getting on their bikes to move them to whatever tree branch they could find for protection from mother nature. Not me.. I just grabbed the camera and watched it fall. The sound of fairly large hail hitting the bike is an oddity - the ping sound from it hitting the tank is much different than the ping sound of it hitting the bags, etc. I bet if I had a few adult beverages in me, I could create a song from the different ping tones. But anyways.... 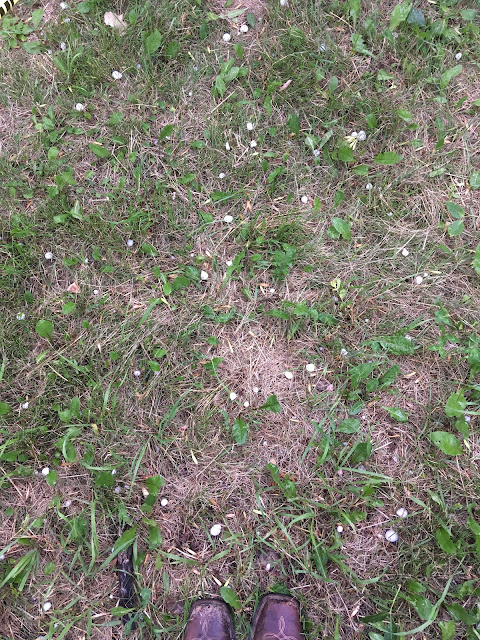 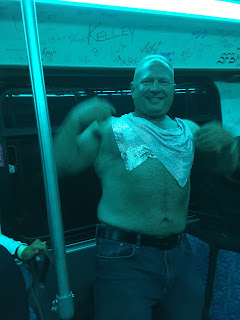 We chilled around camp, bs'd with our rally peeps, had a couple of drinks and made our way to the end of the road to catch Da BUS and go downtown for the night. The bus is always an adventure in itself.. no matter what time of day, it is usually busy and there are at least a couple of people who clearly started partying around 9am.. they can be identified as the folks who are making use of the stripper poles on the party busses or the ones who are dancing to the loud music bumping on the speakers..while making awkward eye contact with those of us who are not to that level yet---> Regardless, always a guaranteed laugh to be had!  And the best part is that you can bring your own drinks on the bus.. cheapest party in Sturgis!﻿
﻿ 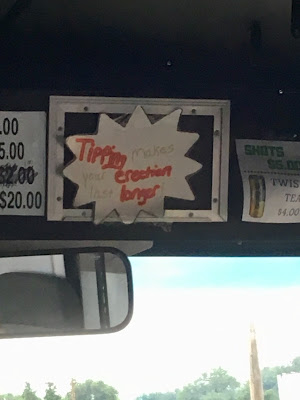 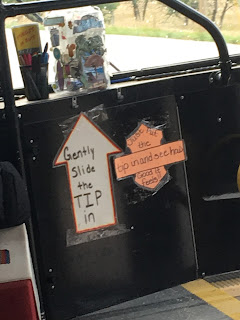 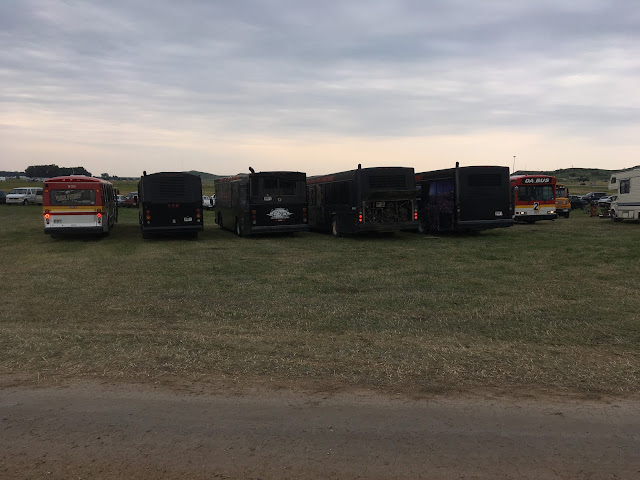 Random fun facts: 16A is the only route through Custer State Park that you can travel on without paying an entrance fee to the park (provided you don’t stop in the park itself). Another fun fact – there is a 4-lane tunnel on the road – the only one in SD.