Quick trip (28 hours...) to Arkansas for some mental chill time 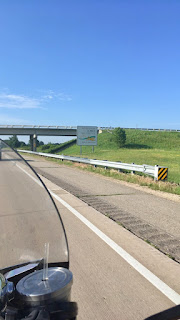 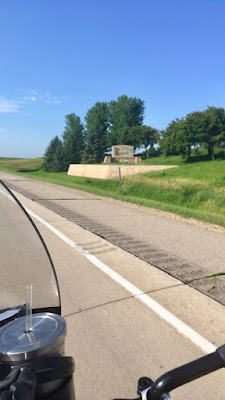 You know those moments where you just need to get away? I had that moment recently. I was craving some hard riding with lots of corners and needed to just not think for a day or two. I had a lot of crap going on and just wanted a breather from adulating for a day. So, I decided late one night that I was going to ride away to somewhere with corners. Last minute I decided Arkansas - I am somewhat familiar with the northern area and that would take away the 'stress' of planning routes. So at 10pm I start packing the bike - grabbing all my camping gear because I had zero plan which meant zero lodging prospects at that point. I let my parents and my bestie know I was hitting road to Arkansas and would update them when I got there. Most people are shocked when they hear that I would just up and ride a few states away by myself on a whim. Not my bestie or my parents... they didn't even ask questions just said to have fun! I get that independent spirit from my dad who also travels solo often. 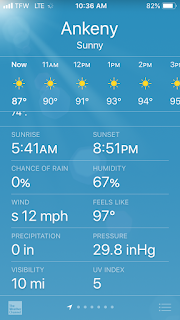 Anyways - it was a 'real feel' temp of 108 the ENTIRE way to Arkansas. I have a cup holder on the bike, I have cooling gear, etc.. but that amount of heat just automatically adds time to the trip. My bike was hot, I was hot, etc etc. So instead of the ususal 11 hours to get there, it took 13. But, I wanted to be safe/hydrated and didn't want to torture my body any more than I was already doing, so I took care to stop a little more often than usual and seek shade/drink fluids and eat. I never think to eat when its smoking hot outside..... 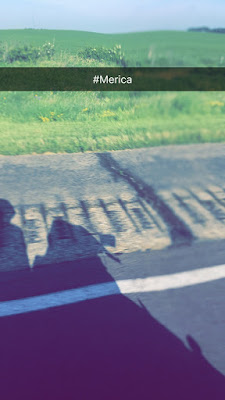 Traffic wasn't too bad - there was one point in Peculiar that had major delays due to construction. So I pulled off right before that area and asked the locals what the drive around route was - they told me the backroads and I was on my way... those poor people stuck in non-moving traffic on the freeway.. I would have died of heatstroke along with the bike! (back-up on my left) Freedom of the open road on my right! 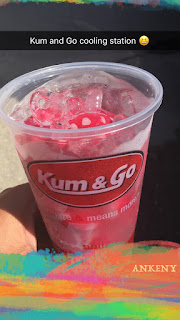 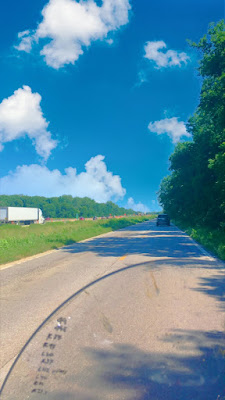 I have always had good luck bringing my water bottle into the gas stations to get ice so that my HOT water could be drinkable for the next leg of the ride. I have only come across a few stations that didn't allow me to get ice for free - so naturally I avoid those places! Kum and Go is great - and they even hooked me up with a glass and ice water for re-cooling my neck wrap. THANK YOU! 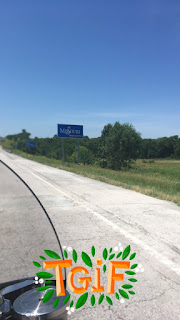 I cross the MO state line, then enter KC area.. and then Lamar...from that stop, I know its only 3 hours remaining... I also call that '1.5 gas stops left'. And shortly after this stop, the CORNERS start up and never stop till the return trip home!

Meanwhile, the temps never dropped below 100 degrees... I LOVE heat and managed to arrive in one piece and not dehydrated. YAY!  The cooling neck wrap is nothing short of amazing for keeping body temps down.. 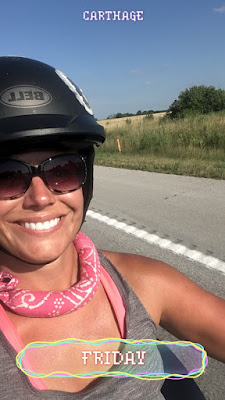 And in MN news the next day.... this article shows up! 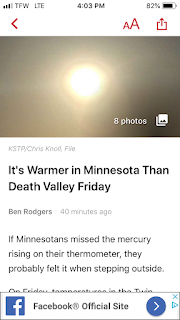 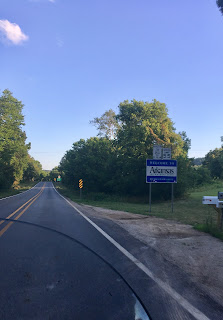 I see the WELCOME TO ARKANSAS Sign and immediately felt happy with my decision on riding there... its like a second home.. I love that area.  The roads into ES are windy as can be. The sun was nearing the end of its day and the views were quite amazing. And relaxing! 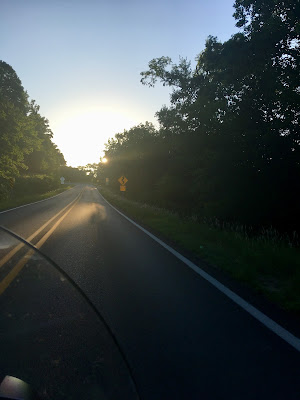 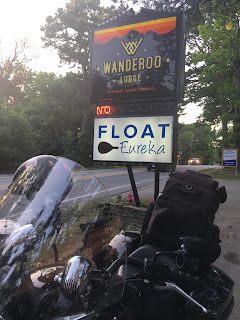 660 miles later, I get into Eureka Springs and was able to find a motel near the main drag last minute. Its a rustic little place that was recently bought by new owners who are renovating it. I get my room key at 10pm and walk up with all my gear to check in. I open the door using the physical key and voila! There's luggage in the room and someone was clearly already staying there. I hastily shut the door and brought the key back. Next thing i Know the gal is on the phone with her manager explaining the mix up and that they were fully booked. Great. Its really late and finding something at this hour might not be possible because its a quaint town full of ma and pa motels that aren't open 24/7. Feeling hopeful, I waited it out and googled places I could camp, thinking I would just go set up a tent instead. She got off the phone and turns out they did have a room for me. I re-checked in, showered, and rode down to the local pub that I know people at (yes, I might be an Arkansas frequent flyer!). 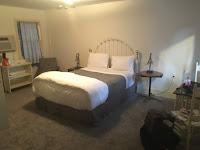 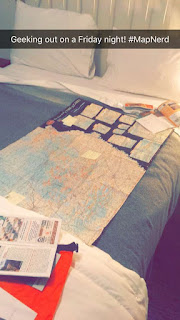 I pulled right in front of the drink rail porch and immediately a few older guys are yelling 'girl on a bike' and started talking about the bike. Then they saw the 106 on the side and quieted down a little (giggle). They were trying really hard to be macho and biker-burly.. until the manager walked down to look at my bike and noticed the MN plates and Iron Butt backer. They started asking when I left and why I was alone. I left this morning and I like riding alone sometimes. Shockwaves crossed all of their faces and next thing you know, they all were high fiving and asking me 1000 questions. They asked how long I was in town... I said one day.. and that brought even more 'holy sh#*' chatter. The security manager and I have met over the years at the bike rally - he didn't realize how much I ride, and was working hard to get me a 'free patch' for my vest. Not necessary, the pub was one of the first patches I had sewn on! I love it there! I had one beer, and since they stopped serving food already, I left. I decided that everyone was far too drunk to enjoy hanging out, and then I went back to the room and started looking at my beloved Butler map to find new roads to try out in the morning. Not even McD's was open... beef jerky will have to suffice yet again!