Grand Junction to Moab via 54 miles of gravel (some ROUGH!) 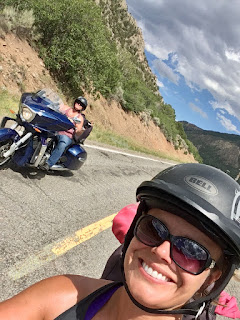 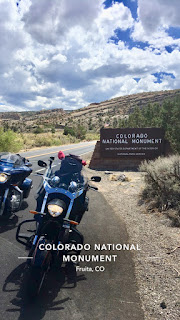 After our long long day doing the 1,200 mile iron butt and making it to Vail sans sleeping arrangements.. which then pushed us forward another 200 miles.. we were tired! We set the alarm so we would get up in time for breakfast, which we managed to do. I admit, I took a smidge of a nap right after... 8 hours of sleep in the past (going on) 4 days is catching up to me! But I am on vacation now, so its all good. We have breakfast and slowly start to repack the bikes. By 10am, its 84 degrees and by the time we got the bikes loaded, we were sweating all over again. So much for a shower! I check my oil and mid-check a semi started backing down the long narrow driveway of the hotel. Shelly had parked her bike to jump off quick for ice as I checked my oil.. and now the big rig was gearing right at it in reverse. I drop what I am doing and jump on her bike to move it out the way. Then return to my bike, fire it up and DANGIT! Shut it off immediately as oil was flying 3' or better onto the sidewalk next to me.. and all over my pipes, my bike, my floorboard, and my foot. I cannot believe I just started my bike without tightening the dipstick.... This is how *Squirrel* moment-y I can be.. Not even 1 minute and I totally forgot what I had been doing. So i clean up my mess and we head out for a fun day of riding with our destination somewhere in NE Utah - Moab or the like. Not wanting to rip freeway (again), I take out the Butler map and find a couple of fun twisty roads to take. 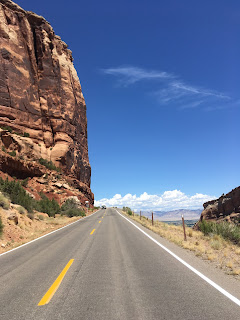 We start out right in Grand Junction headed towards Rim Rock Drive - its a National Park which I wasn't aware of. I missed the turn the first time, and circled back- at last minute I realized we only had 2 water bottles for the 2 of us.. its 102 degrees and that was def not enough water. So we doubled back to the gas station for a gallon of water and a couple of PowerAde's and off we went to the gate of the National Park. The options for National Park passes are $12 a bike for EACH park (up to $35 at Zion) or 2 bikes for $80 for a year. SOLD! We buy our annual National Park Pass and head up the hill. I loved the road right from the start - there were some sharp corners, on a cliff, with great pavement meant for us to corner on! 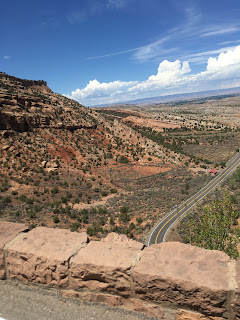 The entire 27 or so mile road was amazing - great views over the cliffs, awesome corners to play on, and perfect road conditions. Oh and minimal traffic. It was our day! We stopped randomly to take in the views, to fill up our water bottles, and to just stop and soak it all in. Truly beautiful country and I feel very lucky to get the chance to be soaking it all in!! We stopped at the visitor center for a park stamp and a cool off period, then headed back out. 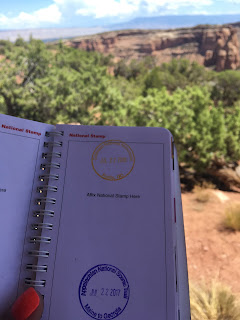 From Rim Rock we hop on 141 to Gateway, CO. We gas up, as I figured there was zero other options for miles and miles - judging on the lack of anything between Grand Junction and here. Gas was $4.05 a gallon - but we needed it, so I don't mind paying! We grab gas station food, reapply sunscreen, and hit the road once again after checking out the map options. I had seen a road that looked awesome - it was gravel, which is fine - but it was 54 miles of gravel... So I bypass that idea and write down the next best option. Not more than 2 miles afer leaving the gas station, I see said gravel road... John Brown Canyon Road... I turn quickly... on instinct. I creep along trying to decide if this was a good idea or not.. then I see "Heavy Truck Traffic on this road" sign. Pssh! It MUST be fine if lots of trucks are using it!! 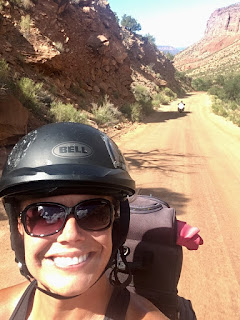 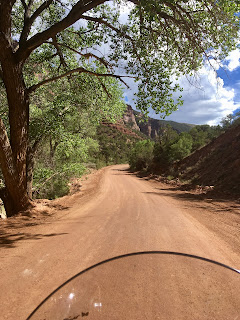 And off we go. I laugh a little as Shelly once recently said that her following me was 'time limited' or something to that effect, the last time I wanted to go down a gravel road and nearly got us all tipped over sideways. The road got narrower, windier, and more tree covered, but the gravel conditions were adequate thus far.

We were cruising along just fine - dodging the boulders, swerving to miss the potholes... making it around the uphill, gravel, switchbacks like we knew what we were doing. We stopped for a water break a ways up - hard to let go of the handlebars on this road! I look back and poor Shelly had a look of fear on her face. I know all to well how easy it is to mentally block myself from riding well... I know what I am doing, I know I can ride on this, but yet, its a mental challenge some days. This was her day. We grabbed a drink, bs'd a bit, and I reminded her to breathe! Then back at it! 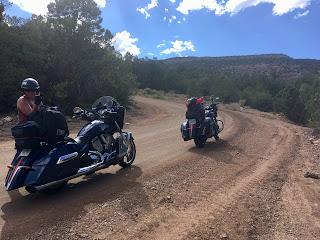 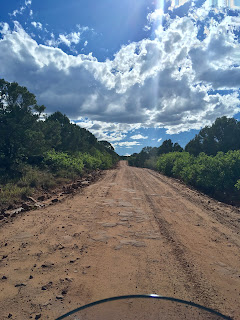 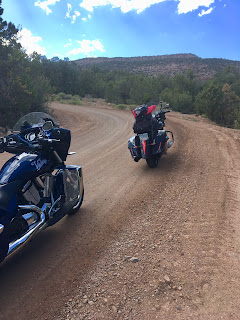 The gravel was rough and slippery at a few points, making the back end of the bike fishtail pretty good. Never the BEST feeling, but I have learned that fighting it makes it worse, if I just trust the bike, odds are, I will stay upright. We saw some wildlife - elk, deer, birds.. we had great views of cliffs and valleys and red rocks along the forest.. We saw a mere 3-4 other vehicles on the entire 54 mile stretch. 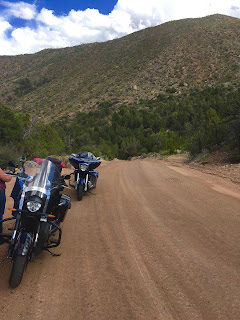 As we rode farther and farther into it, the road narrowed and the gravel became crappy at best. But, at this point we were almost 20 miles in -so turning around seemed like a mute point.


There were a few tight, uphill switchbacks on loose gravel... the first few I managed just fine, and then there was switchback #4 - this one a super tight, downhill U.. with super big and loose chunks of gravel mixed with fine powdery sand. I fishtailed like crazy and the ruts pulled me WAY over on the edge.. aka, the loosest of gravel... I was pretty confident I was about to dump the bike.. somehow at the last minute, I managed to pull out of it and remain upright. I was already sweating from the heat, but that incident made me need a water break! Then we hit what was VERY recently mud.. thankfully dried just enough for us to make it through without taking a digger! 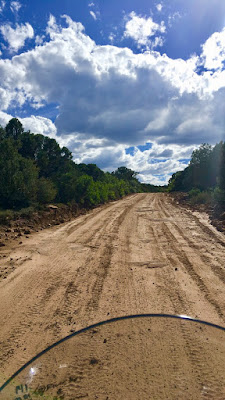 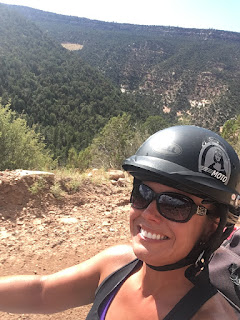 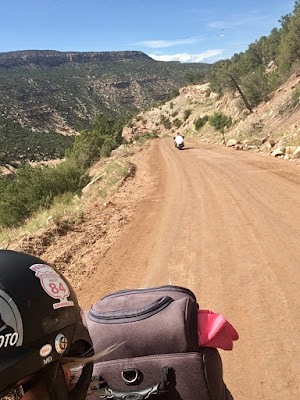 I was hoping Shelly didn't see it all go down in front of her! The rest of the road went from pretty bad to bad to semi-ok to ok... and around mile 50, back to pavement. We survived and the views were 1,000% worth every gravel-ey switchback and near miss!!!! 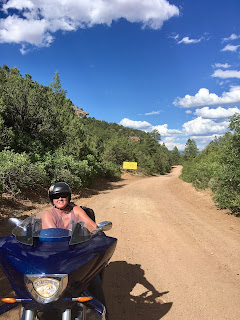 Along the way we also saw a random hazard sign warning of open Uranium mine shafts... never would have thought to look for those!! 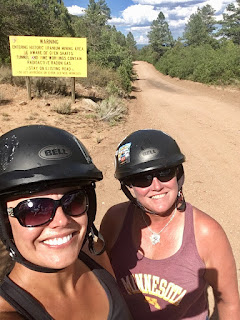 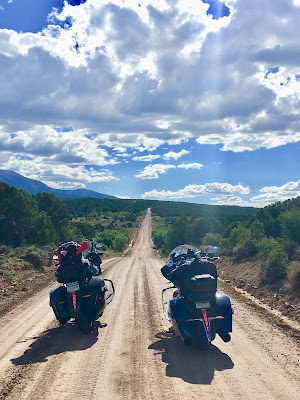 We stopped to take a lot of pictures - of the road, the views, signs, and lookouts. An awesome ride overall!!! 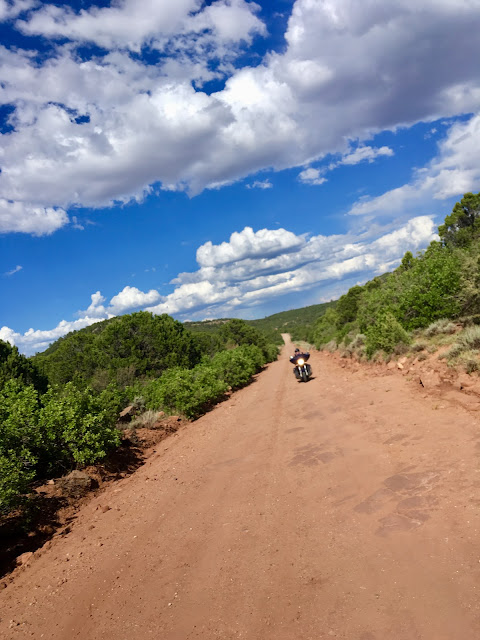 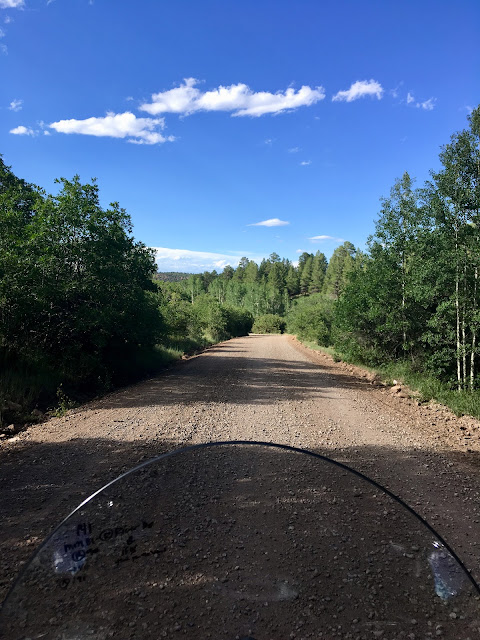 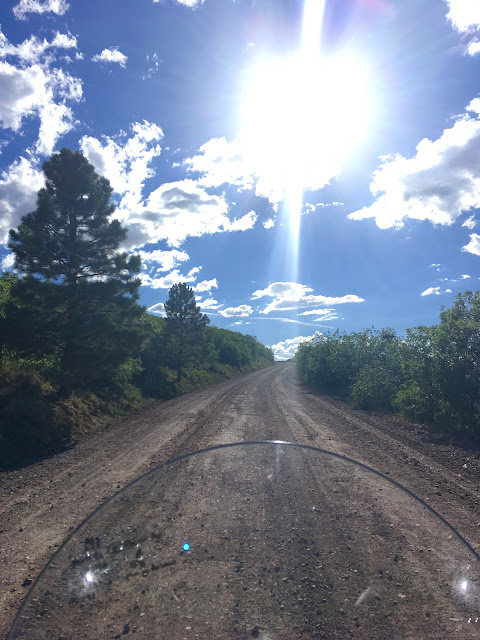 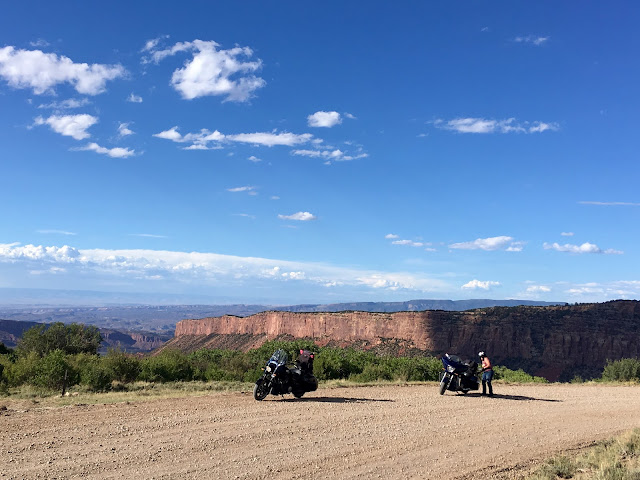 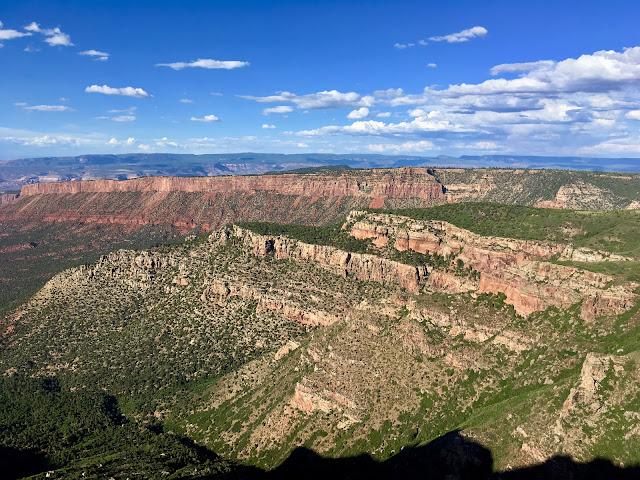 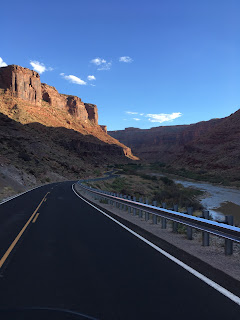 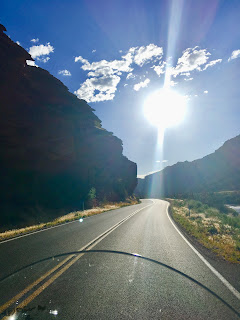 Once we made it off the gravel. it was freeflying towards Moab. The ride into Moab area was just as stunning as the rest has been - expansive views of hills and valleys and the river. Add in nearing dusk - awesome! 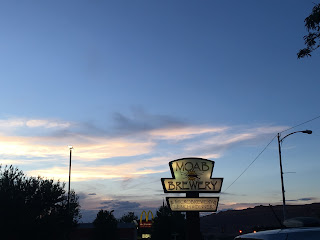 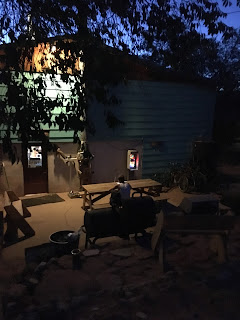 Once we arrived in Moab, we were hot, hungry, and thirsty. We found our way to the Moab Brewery - the place was packed! As we got there, one table at the bar was just leaving - score!

We started our search for somewhere to stay for 2 nights. Turns out Moab is not a cheap area to stay in! Considering we use the room to sleep and keep our stuff, we don't require, no want, much. The cheapest hotesl were over $100. Then came the idea of a hostel. I LOVE hostels - all but one time I Have instructions on how to find the 'spare house' - and find our room #8. We didn't think twice as we grabgbed the key, hopped back on the bikes and made  had great experiences in them! Lucky for us, Moab has the LAzy Lizard Hostel - and they had a single room opening for us! But it wasn't at their main location.. instead, we got keys and were given hand written our way to said house.It could have been a trap.. but that never crossed our minds. We were tired, hot, and wanted a shower! We check out the place - its interesting... rustic-ish...not fancy by any means.. but it was perfect for what we needed and at $92 total for 2 nights - SOLD! We checked in, showered, and planned for the next adventure !﻿