- July 26, 2018
I am a night owl. I come alive around 8-9pm every night - regardless of when I went to bed. I am not a morning human. I am the girl who sets 3 alarms only to hit snooze for every single one of them...twice. So for me to wake up at 4:40am and be excited for it is pretty rare! But if there's one thing I want to do while at Arches NP, it is see the sun rise over the Delicate Arch. And in order to do so, we had to be up and out by 5am to ride down to the park, ride into the park several miles, put on hiking gear (because BIKER gear is not meant for this), and hike the 1.6 miles uphill to see the sunrise. We make it out the door in under 15 mins - not caring what we look like (clearly) as I roll out with capri yoga pants that end just above my Ariat riding boots..  with a bright tank and topped off with my leather vest.


Nothing spells "I don't care" quite the same. We were getting on the bikes when in the not very far off distance there is thunder and lightning blazing across the sky. Minor detail - I never did check the weather! I pull it up quick and it appears to be moving out of the area thankfully. I wasn't about to mosy up the park only to get stormed on and not be able to hike due to super slippery rocks/trail. Luckily that wasn't any issue. We made it to the entrance of the park and were surprised to see 3 other cars  making their way up the S shaped roadway into the park. At least we know we arent the only crazy ones! We continue into the park making way to the Arches parking lot via twists, turns, and hills. We parked the bikes and I threw my boots into my saddle bag and traded them for my Asics, grabbed my Camelback (only its a generic brand.. more on that later), and start the hike uphill. 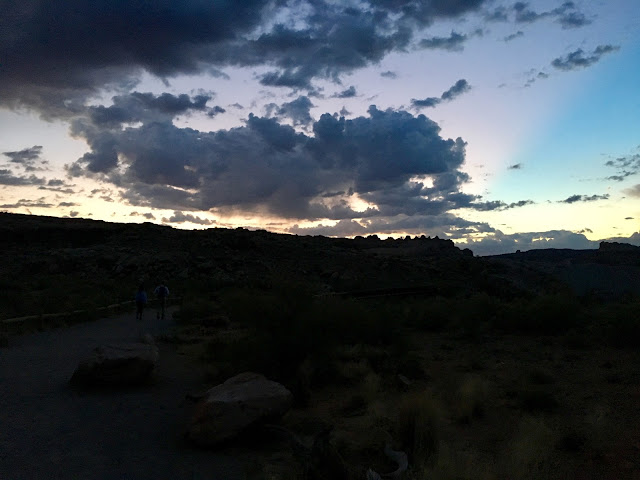 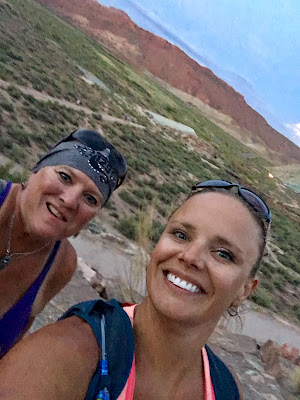 The hike to the Arch starts out as gravel, then turns into an S shaped ramp with a fairly steep inclines. Next up, we are walking on ginormous flat rocks, higher and higher. It didn't take too terribly long for me to get winded... its a good reminder why I need to get back into shape. Breathing.. Breathing is a good reminder! Midway up the climb, I go to take a sip out of my trusty new off brand Camelbak only to suck air and not water. I mess with it a bit, still air. WTH. I stop to take the guts out and find a leak in the hose.. Now I am out of shape, winded, and thirsty.. and irked on top of it all. I had to dismantle the entire thing to find the culprit - a 'twisty' thing came unscrewed at the base. I fixed that issue, and finally had water. By now I was dang near parched. We continued the jaunt uphill - seemingly getting closer and closer to the Arch, but yet, soooo far away! We made it to the top of the trail just as the sun was rising to our left over the rocks and 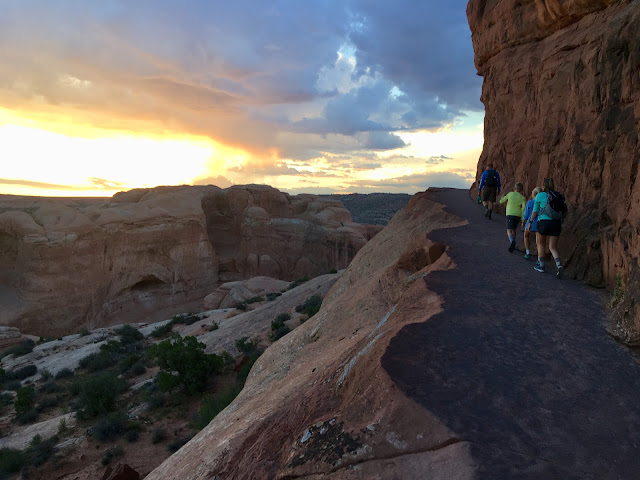 The arch is to our right, still immersed in the shadow of the night. There were around 40 other people there to watch the magic of nature take place - its a remarkable sight and so peaceful - everyone just watching nature happen and soaking it all in. 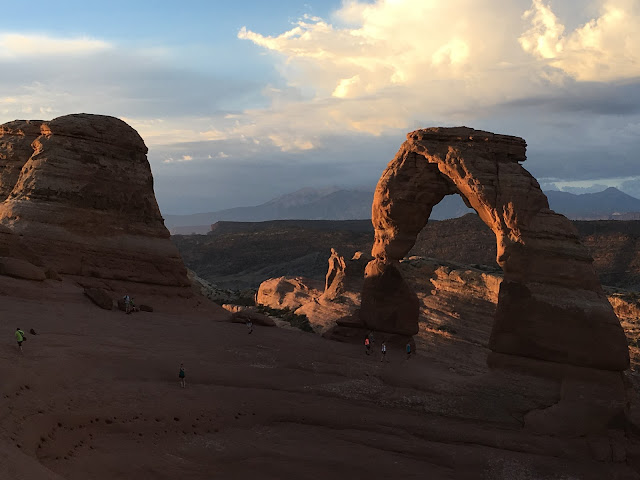 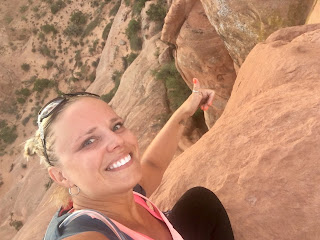 We watched as the sun inched its way higher into the sky and closer and closer to the Arch, until the peak of the arch was lit up. We got in 'line' for pics under the arch - people were very generously offering to take pictures and vice versa. We got our pics and then wandered around the rocks for a bit, continuing to watch as the sun rose up and over

Before descending, I had to take an obligatory photo 'from the edge' for my mother - she loves these. ;) Eventually we make our way back down to the bikes from the Arch - sweat dripping off our heads as the sun quickly warms up the air around us. Once at the bikes, we change from 'hikers' back to 'bikers' and mosey out of the park, back to camp to pack the bikes. 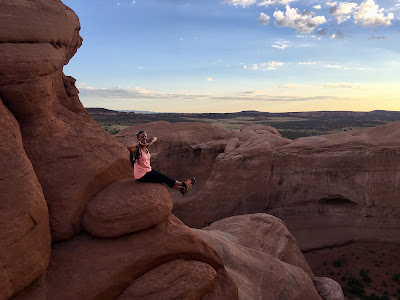 We pack everything up, clear out the hostel, and hit the road south towards Moki Dugway... Moki Dugway is 10% grade, 3 mile long, gravel road - all switchbacks- that cuts across to Mexican Hat. We near the Dugway and the signs warn us of the upcoming challenges - we are ready to tackle them! 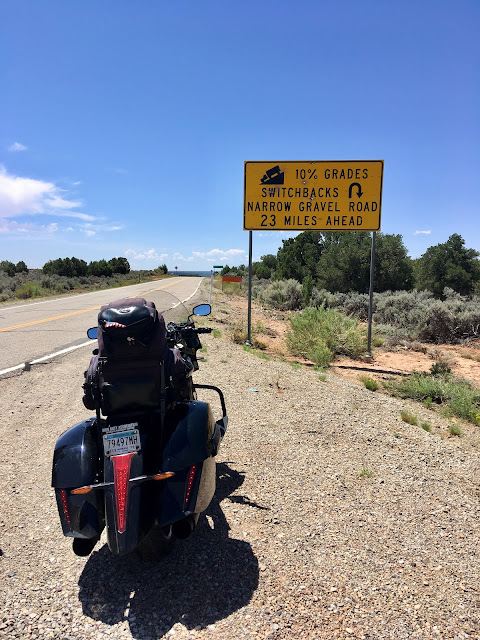 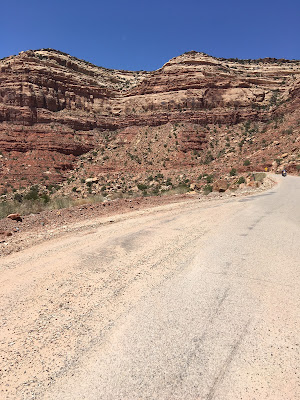 We stopped for a few pictures, and crept our way down the Dugway - mostly in 1st gear - while keeping the bikes upright on the gravel. Its a super fun challenge and far easier than the first time I remember riding it - where I stopped at the very top of the road to put full gear on as I was convinced I was going to dump my bike. That never even crossed my mind this time - a mere 5 years later. 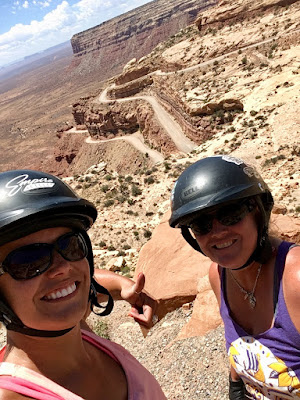 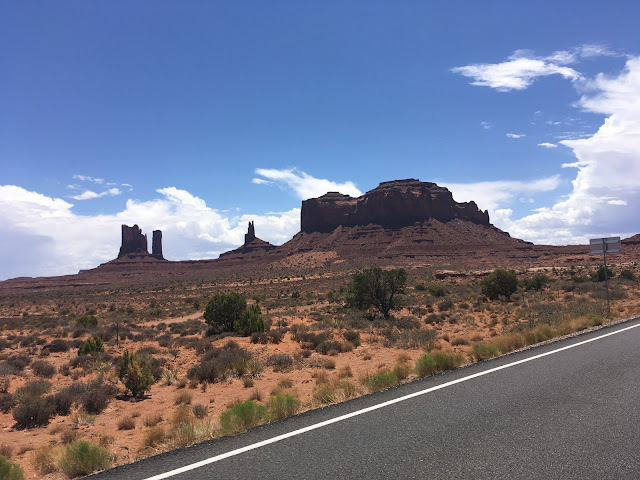 I know Monument Valley is portrayed ina  variety of movies... which is the only reason I realized what road we were on -  its flat, long, and straight as can be - appearing that the road itself will run right into ginormous hills of mountain rock at the far end. I take pictures while we ride and we continue on to the Arizona border.

I have unfinished business in Page AZ - specifically Glen Canyon- Antelope Canyon... where I once kayaked ALMOST to the end but got reprimanded to leave before making it to the end due to storms coming in. So this has been on my re-bucket list for some time. The drive from  Monument Valley to Page AZ is super boring - but some rain, thunder, and lightning helped spice it up some for us. The rain was a welcomed guest - its 108 degrees and cool rain felt amazeballs! When we got into Page we stopped at the visitor center then went to a local bar - The Dam - to scope out our options for sleeping. I rarely book things in advance and have rarely had issues in doing last minute lodging. Except today. Today was a challenge. Every hotel and motel seemed to be booked and those with rooms wanted upwards of $160. I am too cheap to pay that kind of cash just to sleep. One by one, the number of available rooms in the town dwindled. We were about to settle on having to pay a LOT for one night. when i went back to my Expedia app and hit refresh - 3 beers later we had ourselves a room at Motel 6. Thank goodness! We are tired, hot, and just want a shower...We checked in, showered, poured a drink and well, the energy we had earlier to go out tonight had quickly faded. Next thing ya know, we were in bed like responsible adults by midnight. Fresh air and sore muscles made us tired!! 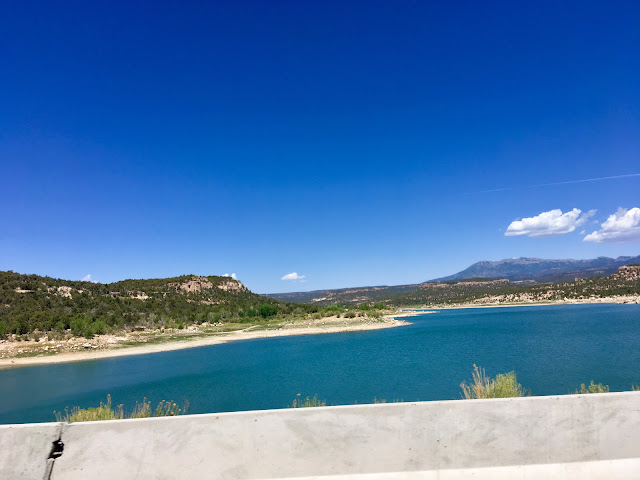 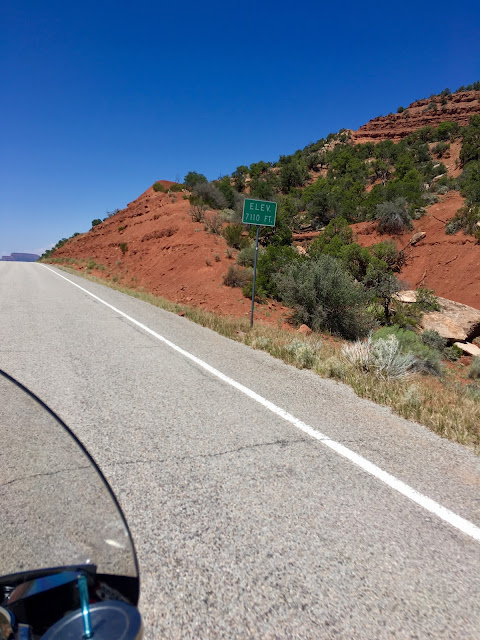 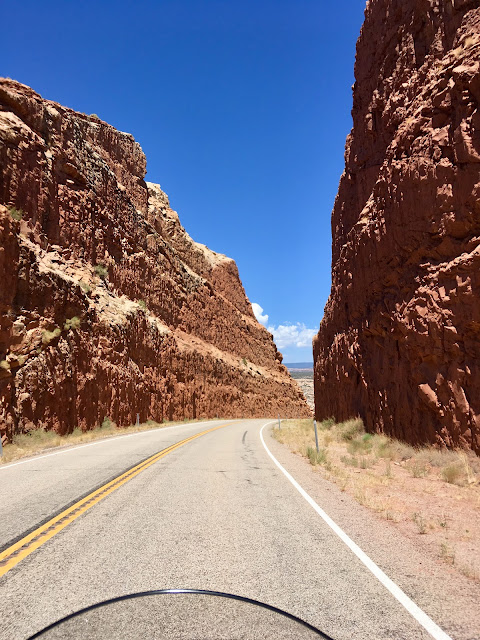 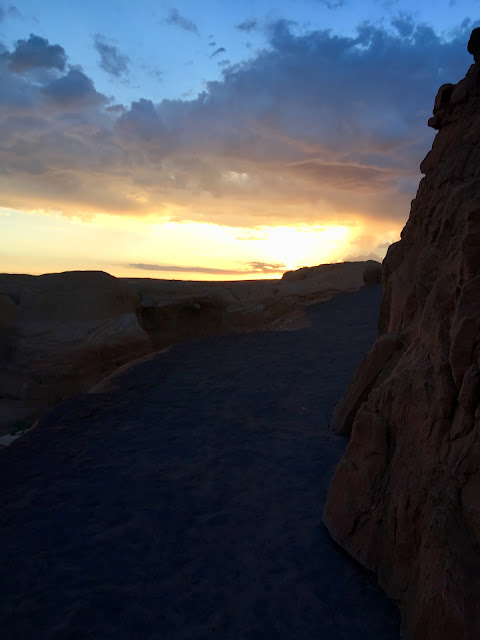 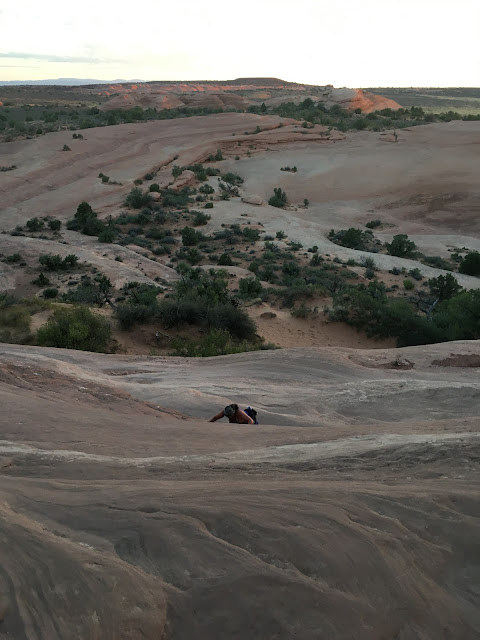 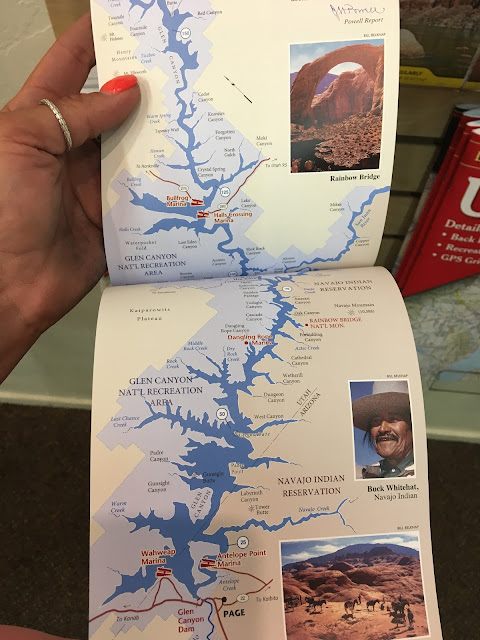 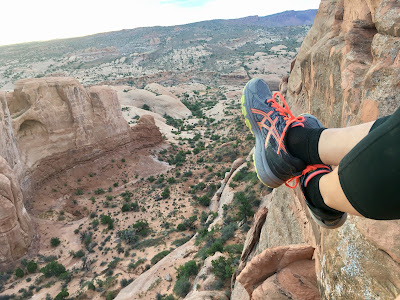 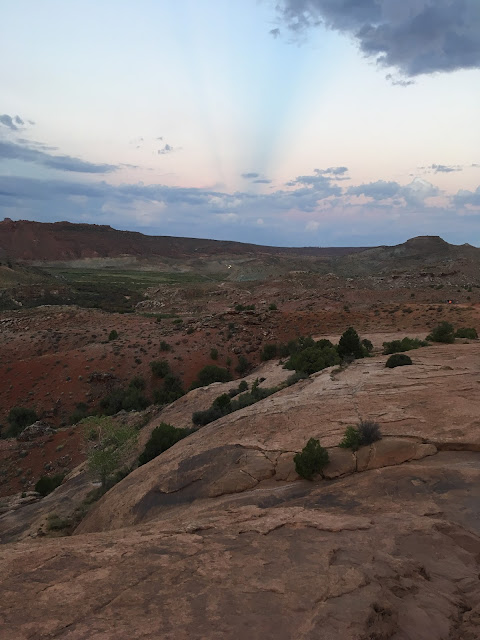