Moab and Canyonlands NP: Literally HOT seats and naturally, a side of gravel 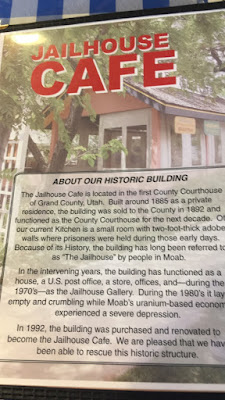 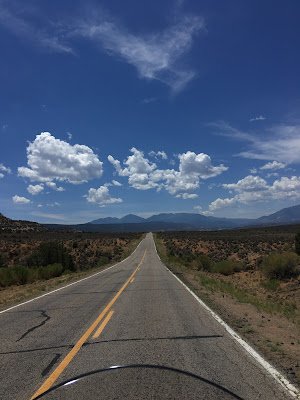 I am proud to say that I lost weight last night! The hostel we are at has one window AC in the kitchen... to get to our room you walk around the kitchen, down a long hall, and three doors on the left. Needless to say, we felt zero AC. We had a fan going, but it was just blowing around our stank-nasty odors from the long day in the sunshine. Aside from that, the hostel is great!! Woke up and headed out to breakfast - Jailbird Café.. seemed fitting considering our careers and it was highly entertaining - from the waitress who had so much spunk at 9am it made me want to be a better person.. to the explanation of where the old judge's chambers used to be (the now kitchen). 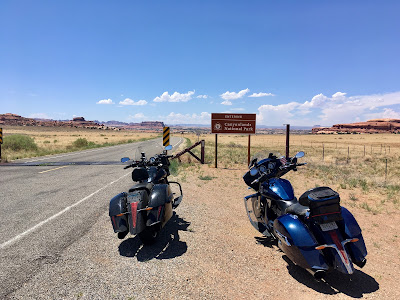 Breakfast was amazeballs and well worth it.

Next up we headed to Canyonlands NP - it was a relatively boring 50 mile rip down there, but after stopping at the visitor center, it got fun! 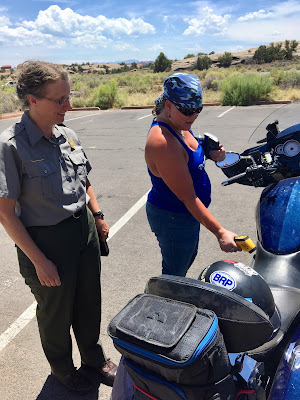 As we were walking from the bikes to the Visitor Center one of the Park Rangers was walking out of the building and invited us to participate in 'a little experiment'. Heck yeah! I didn't even need to ask what it was! This will be fun! She pulled out a little yellow gadget no bigger than a scanner gun at the Target check out line... and pointed it at a rock. She asked what we thought the temp of the rock will be. I guessed 113.. Shelly guessed 104. We were both way wrong! The rock was 130 something. Next up they were measuring the heat of the pavement - 154!!! They explained the experiment - and the jist that I caught before it got too 'sciency' was that the sun hits the rock, the rock absorbs the heat, creates its own, and sends the heat combo back into the environment. This is why it gets way hot as the day goes on. I was kind of following still at this point. Then she asked what else we wanted to know the temp of. I quickly said 'the motorcycle seats!'... because that thing HURTS to sit on after its been in the sun for 5 mins. She handed Shelly the gun, told her how to work it, and as soon as Shelly pulled her helmet off the seat and  hit the trigger, we all three stared in awe at this little tiny yellow gun thing as the temp read 106.. then 110... 120.... 130.... 140...150....158.7 degrees!!!! 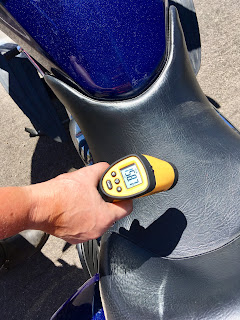 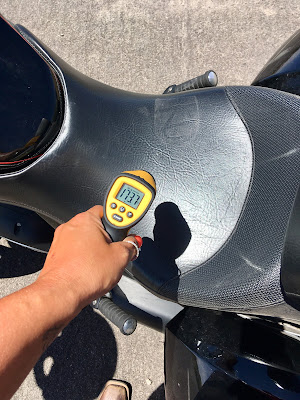 So we started talking about all the things we would measure with this nifty little gun thing... and then we got distracted and found stickers and started talking to the other rangers about the sign that said 'gravel roads open to high lifted 4 wheel drive vehicles'... I asked what constituted 'high' and '4 wheel drive'. Turns out, the bikes didn't qualify. Damn. A little while later, ranger Dawn comes in with a new group of people - they had just measured the hood of a black car vs the hood of a white car. Surprisingly only 10 degrees difference. I am telling you, I want one of these little guns!  We BS with the rangers and make our way out to the lookout, then turn back at the dead end and head back towards Moab. 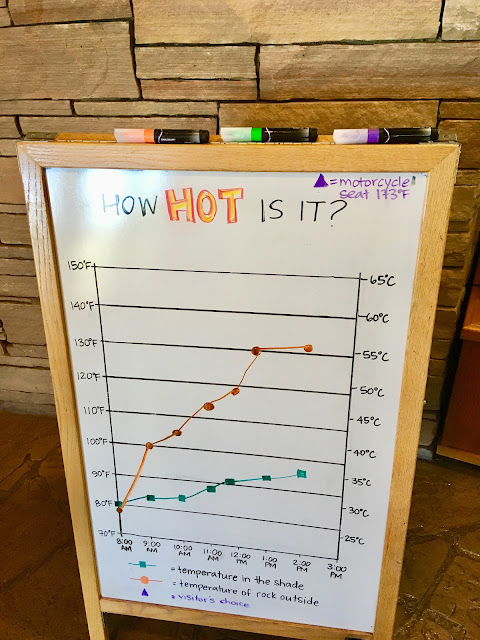 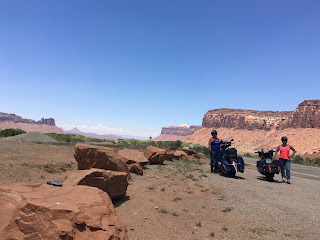 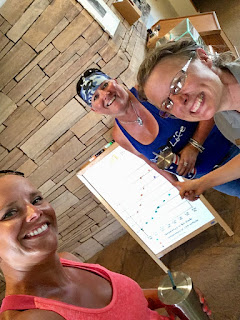 We had already rode 166 miles today.. I honestly don't know how that happens! We gas up and head north to Potash Road. My dad recommended it... so it MUST be good. Because he and I are two peas in a pod - the higher, the narrower, and the more difficult the road terrain, the more enticed we are to try it! 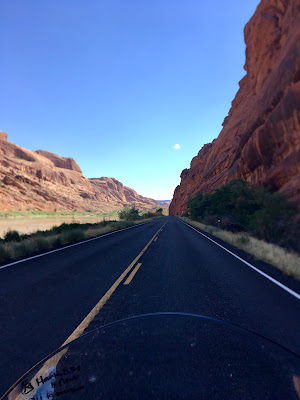 As we rounded the first corner of Potash Road I was hooked. The cliffs to our right were as tall as skyscrapers and a magnificent color of red.. to our left was a creek/river, making good headway after recent rains. 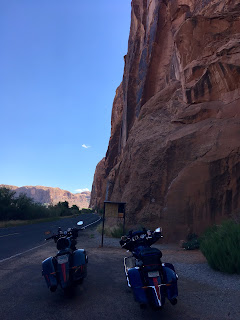 We passed rock climbers bicyclists, and wildlife. We were ripping down the road when it made a sharp left and there was an energy plant to the right side. The road narrowed even more and the pavement got rough quickly. 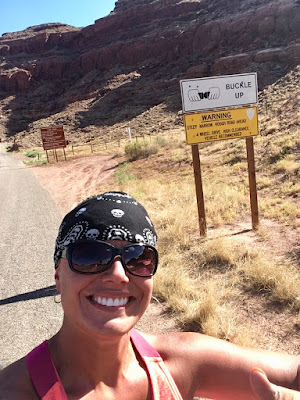 Not one to be deterred from a little bump here and there, we sailed onward until we come up to a warning sign. I read the sign. look back at Shelly, shrug my shoulders and hit the gas. "We've got this" I tell myself! We head up the hill and around the corner and the gravel turned from 'so-so' to 'eek'.. thinking it would improve 'around the next switchback corner' we mosy'd on. It didn't improve... and so I put on my adulating brain and decided to quit while we were ahead. 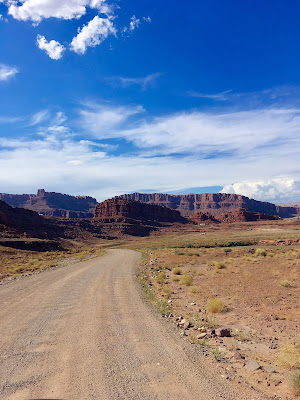 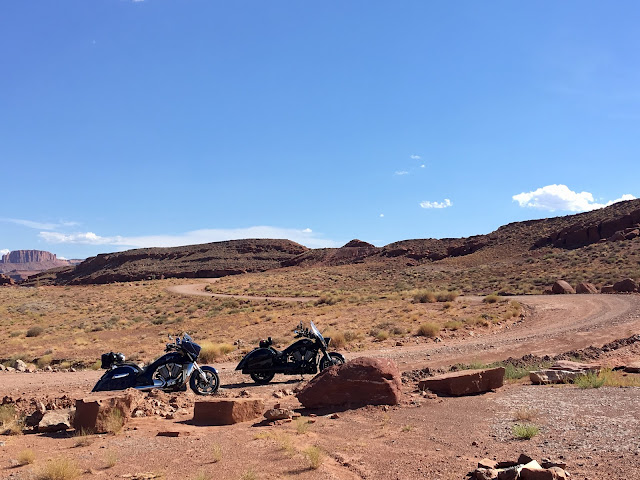 Turning around is crummy until its not. Which is a good thing because when we got back to the hostel i asked 'the google' about that road... and well, it definitely was NOT meant for cruisers. Dirtbikes were struggling to get through the road at one point - Shaeffer Road... its now on my 'to ride' list (on my dirt bike)! On the way back to the hostel, we failed to grab dinner, but did manage to grab a 6 pack. We head back to home base, shower off the grime and dirt and salt and relax for the evening. We hit the hay kind of early-ish as we wanted to be awake well before sunrise for the sunrise over Arches Park.. A chill day of riding and only 200ish miles!

More from the day! 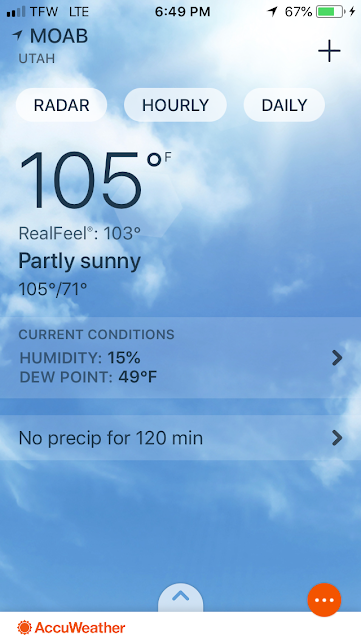 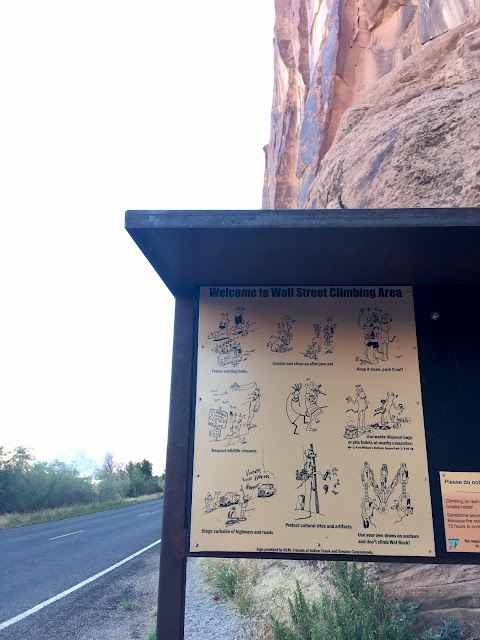 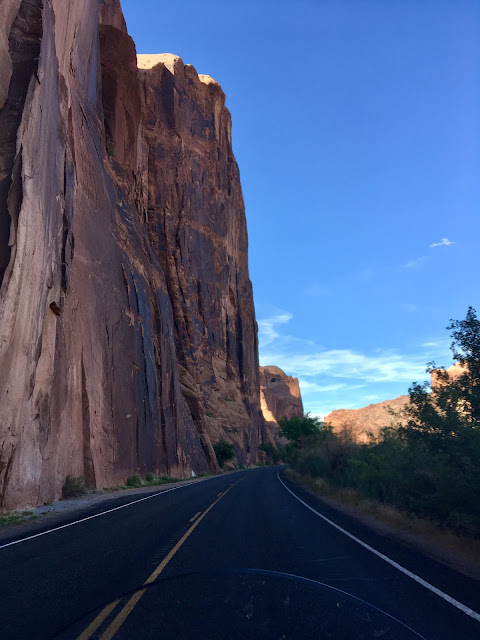 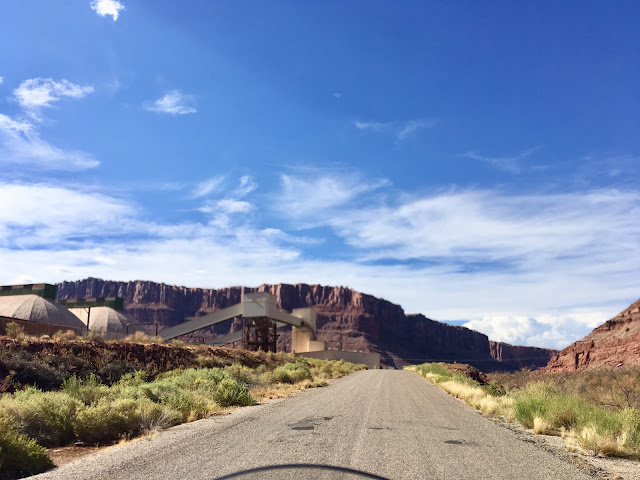 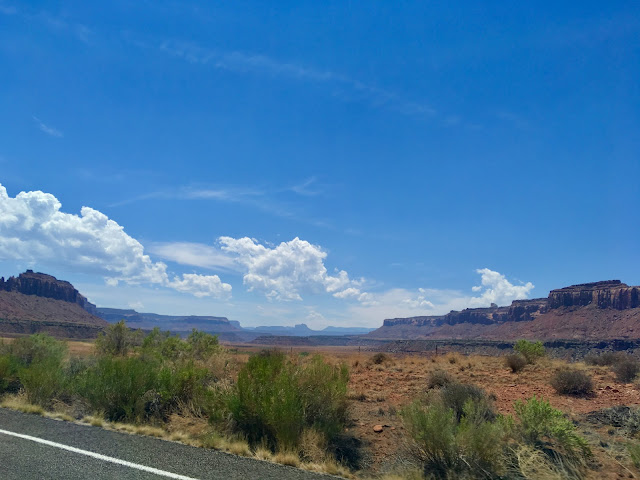 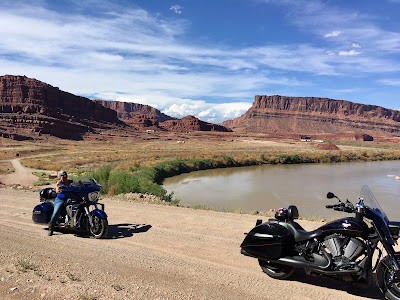 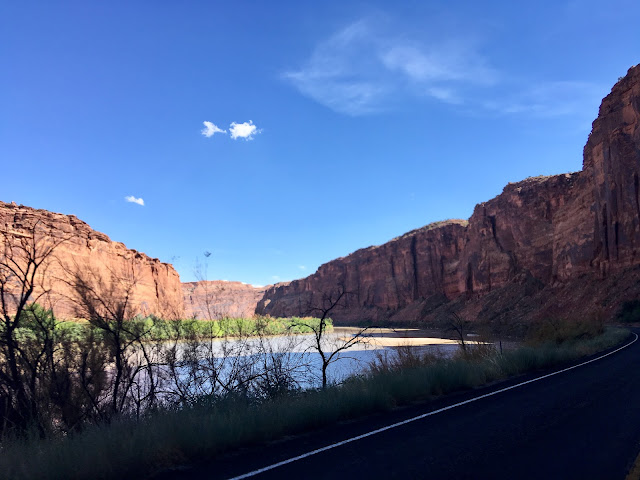