Tail of the Dragon/Blue Ridge Parkway adventure Day One


=-[I LOVE riding in Tennessee and it has been a couple of years, so I wanted to return and try out the Blue Ridge Parkway. At first no one wanted to go, so I was going to just fly solo and see where I wound up. But, when I mentioned a trip to the SE to my friend Stiffy she was ON board and raring to go! We decided to not get up at the crack ass of dawn and ride all day like usual - so we slept in a bit and headed out around 9:30. My fault as I was slow as mud this morning. Its been awhile since I have packed my big bag and strapped it on the bike!! We didnt have to go far to hit traffic - 694 to be precise. Once we got out of the metro it was clear sailing on 94 for a LONG way. But the clear sailing was quickly made more difficult by the amount of traffic.. holy crap it was crazy busy with semis and campers and cars... and while the speed limit was 70, apparently that was 'too high' for many folks. If only we had a dollar for every car we passed...

I wanted to avoid going through Iowa - i have been there a million times this year and recently and wanted to try something new. So we head through WI and IL and IN. Bad choice. The roads in NE WI and NW IL were AWFUL. Like, wreck your bike if you weren't paying attention awful. Craters in the center line, mish mashed lanes created due to construction. Blown tire parts literally everywhere. It was 98 degrees with a dew point of 70 ~ gross sticky hot, but yet, sunshine beats the rain!!

It was a super boring drive - all day. Iowa is hella boring, but I think IL has it beat, at least along the freeways. Note to self.

With the heat and high humidity we were cautious and kind to our bodies - drank lots of water and actually ate real food twice today! Today's fashion statement brought to your by me, FA: 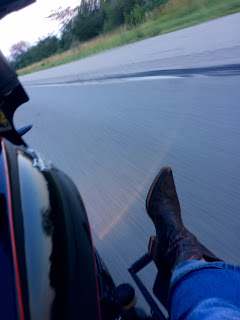 The best views of the day were of the sunset ~ 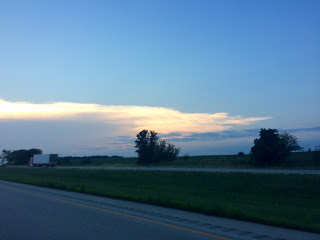 Oh, and we did see a very handsome cock: 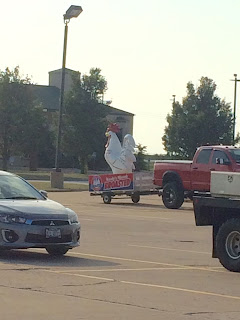 Between heat and humidity and traffic and boringness, we stopped for the night in a little town in IL on the IN border. There were like 6 hotels all lumped together right off the freeway so after a little researching on what hotels were decent (aka clean), we crashed at the Red Roof Inn. The place is clean, aside from the fact that when I pulled the sheets back on one of the beds it appeared Chubakkah had slept there and didnt take his dirty sheets with when he left. Front desk gal felt bad when I asked for new sheets. I didnt care, I just wanted a shower and clean bed! And a beer or two. We found a local taxi company and mapped out a few bars in the area - and after we unloaded the bikes, our plan was to go check one or two of them out. But, as the saying goes, plans changed. Funny how "Are you here for work" turned into THE events of the evening. I will pick up where I am leaving off tomorrow... for reasons that will be known when I describe the evening! Cheers!