- July 22, 2017
We decided not to set unrealistic AM wake times today - after two hard days of riding in 95+ heat and sunshine, we were wiped out. We woke up, checked out maps, and got the bikes ready to roll out. I got a new GoPro last year - and this is the best place to use it - but to my dismay, the whole set up of the damn thing, like the mount set ups, had me all flustered right way so I skipped it. The mount system bewilders me everytime. So I am standing out by the black bike, on the black pavement, in the blazing sun, in a nook with zero wind. The sweat was literally pouring off my body and onto the GoPro case as I was trying to get it all set up. I could get the camera on the mount, but then it wouldn't rotate because the peg things (official term) were in the way. So then I added more extensions, but then the dumb thing would have flopped all over. So after a solid 12 minutes of trying to get it onto the mount and facing something other than the ground or my tire, I quit. I love the camera, but really really really need training on how to get it to frickin mount on in a way that works. Ugh. Patience was low on that end so we just rolled out, sans camera (well sans GoPro).

Its a sweltering day, glad I heart the heat!!~ 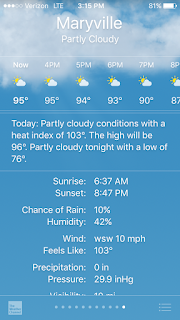 We headed up 129 and then to Cherahola Parkway. It was recently repaved, there was minimal traffic, and so many corners to play on! The views on every bend with an overlook were stunning. 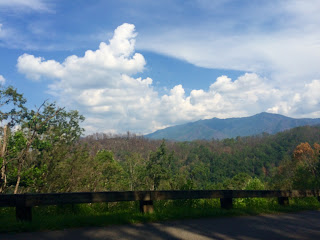 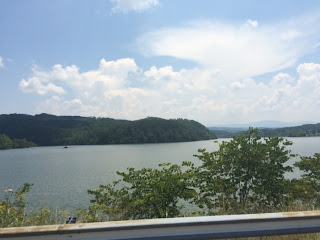 The temps, humidity, and sunshine were taking a toll on our bodies - so we decided to stop for lunch in a place with AC and lots of water. Ended up in Maryville at a Chicago city bar and grill. The food was good, we drank 2 pitchers of water (yep!) and then got ice and water to go. After eating, we were both feeling a little better and refreshed.
We headed towards Gatlinburg/Pigeon Ford. Only 41 miles. But, just over 2 hours later we would find it. Disaster traffic in Pigeon Ford. Plus slow traffic when it was moving. In P.F. We were sitting, red light, after red light, in the blazing sun on a black bike, black pavement, and on a bike that was getting hotter and hotter by the minute. We finally creeped through that city, when I saw "Gatlinburg bypass" - and off we went. Greeted with more fantastic vies and scenery! 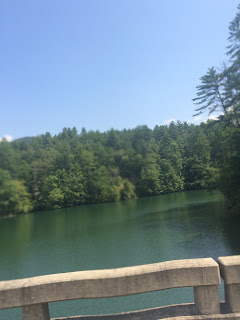 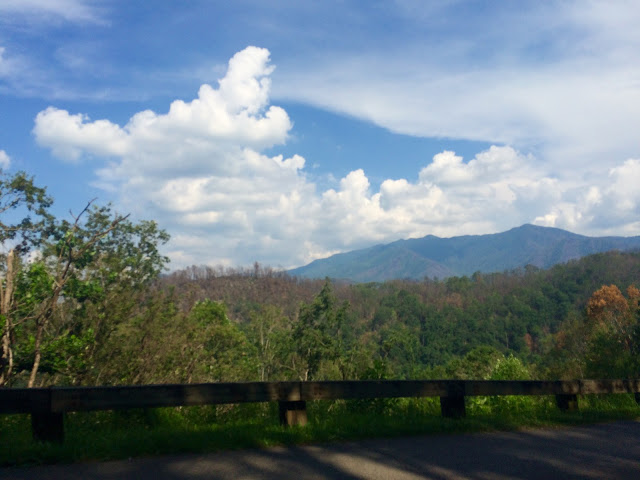 No idea where it went, but the thought of bypassing the next city sounded fantastic. It was. We were greeted with a shade covered road, and minimal traffic once again.
We then arrived at the Smoky Mountain National Park visitor center. I thought ahead and brought my National Park Passport - and I have NO stamps from this side of the country - nerdy exciting! Got my stamp, slammed some water, and headed back towards 'home' so we could arrive prior to dark. But first a pic at the sign t prove we were there! 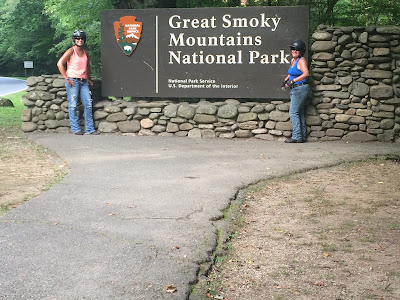 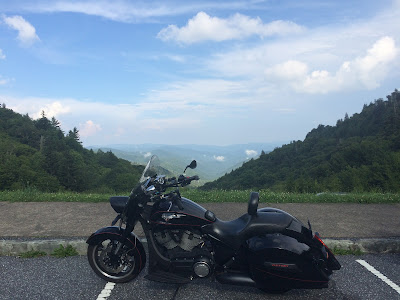 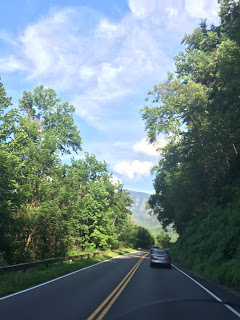 We finally lost our luck on traffic leaving the park - the longest line EVER going SO SLOW the whole way out of the park. Super annoying, yet, this was the worst traffic of the day so we couldn't complain. And we lucked out beacuse the roads were completely wet - yet, we missed all rain of the day! SCORE!

Next up was to find some more Yuengling beer before heading back to our dry county of a home. We stopped by the natural place to find beer - the ABC Liquor Store. But nope, no dice. Apparently we have to go to local grocery store for that. So we tool around Bryson City to find beer - its a requirement before heading back. Yuengling is MY DRUG of choice and its only found TN and east, or so it seems. Packed the beer in bike and finally almost back to our home sweet home. "Only" 28 more miles. So, an hour later, we rolled over the last hill and around the last curve and we were in our city!!! Stopped by the local chow shop and got some dinner to bring back. However, because of the Yuengling, there was no room for food in the bike. So I tied the plastic bags, looped them around my backrest stem, and laid one bag each on my bike bags and hit the gas. Surprisingly, they lasted!  We made it home before dark, YAY! 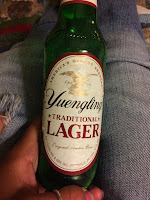 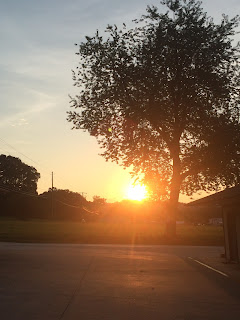 Watched the sunset, had a few beers, ate some chow, bs'd with the neighbors from Maryland, and chilled. A great day of riding indeed. Somewhere around 250-300 miles, though neither of us kept track today. 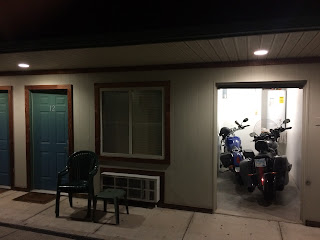 After having a few beers and relaxing, we put the bikes away... in our garage. Yep, our lil mom and pop motel has a garage stall with each room - and both bikes fit!! Awesome!