On the Road to Sturgis with Karma right beside us: A curb jumping, bug killing, Dumb & Dumber adventure...

Sturgis 2020 - what an odd year it has been with the CoVid pandemic and all the hoopla that it has brought with it. I was unsure of what to expect at Sturgis Rally this year - it was the 80th, but a lot of headliner bands had pulled out due to CoVid and I heard mixed reviews from fellow riders on whether they were still going to attend. I went because I hate feeling like I am missing out.  I took some precautions, but probably not as many as I should have. The bonus is that I live alone and work from home, so quarantining after the fact is not an issue at all. 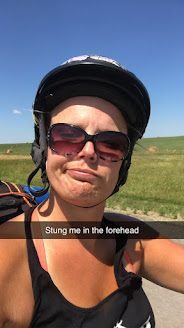 Naturally, the boring 12 hour ride out there wasn't as boredom filled as it should have been!  We were going a hair faster than we should have been and had just passed a slower (but still speeding) bike when I saw the light bar. I knew it was already too late. The officer WHIPPED a U turn before I could say 'Oh Crap' to myself, but since he had already clocked me, I just kept going - and slowly let off the gas a stitch while checking the mirrors fully expecting the officer to catch up and pull us over. Only that didn't happen. Instead, the bike that we had JUST passed must have let off the gas immediately ... and well, that guy took one for the team.  I felt like such a dick!!! I must have checked my mirrors for a solid 30 miles waiting for the officer to catch up to use after realizing what happened. Instead, not a single car came up behind us and we kept on going, through the next town, and the next town, and the next. No WAY was I stopping anytime soon... I didn't want to wind up at the same gas station as the guy who took one for 'the team'. Imagine my surprise, when 80 miles later, we stopped at a po-dunk gas station, ate lunch, and THE bike pulled in. I was such a wuss I wouldn't make eye contact. I felt awful!!! But, he must have had a truck following him as I overheard him say he got off with a warning "Thank Goodness".  See, I KNEW he was speeding.... LOL.
Pretty sure the next events of the trip were karma.
Just 5 miles later, Stiffy busted her clutch cable in Pierre - about halfway to our destination. I turned the corner and she lagged behind and pulled onto the shoulder.  I pulled over at the next street and waited. We once went round and round like a wild goose chase trying to find someone that left the pack - but we just ended up having our own 4 bike parade as we kept waving at each other in opposite directions. So now, the rule is that we wait a solid 5 minutes, THEN turn around to find the person. I could see her and she looked like she was fumbling with something, so I assumed her music went out. I kept an eye on my phone to see if she needed help...and right as I had that thought, a one word text came through: HELP. Confused slightly because I could see her and she didn't appear in distress, I turned around and as I was about to pull into the area she pulled off in, I couldn't help bust out laughing. WTH was she doing parked all wonky with one tire up on the curb, one leg touching the ground while the other flailed around trying frantically to find something other than air?  Not only that, she looked frozen in time. There was a look of fear on her face as she mean mugged me and continued to have a death grip on the handlebar with one hand while frantically trying to unhook her helmet with the other (it was SCORCHING hot). 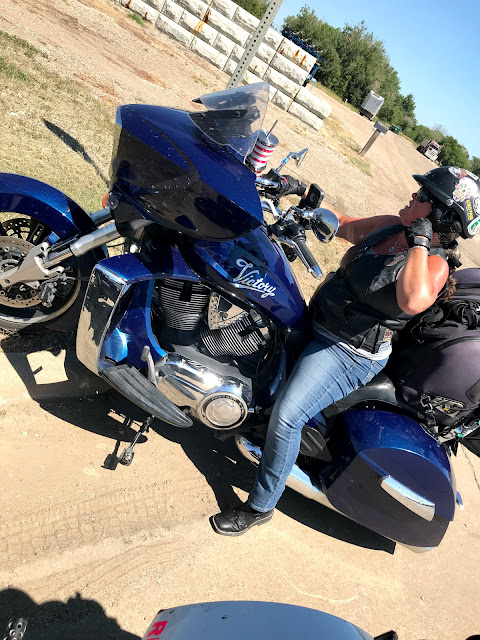 You know when you see the meme's of someone riding their bike, but then winter hits and they are suddenly frozen in time, still in full riding position? Well, that was Stiffy...only it was hot outside. That's when I realized she had moved her left hand and there was no response from the clutch lever. It looked a bit like it just gave up on her. Well, it did. She had just cleared the turn and felt it snap so she veered off the side of the road, but didn't quite hit the brakes fast enough and instead gassed it up onto the curb, with one tire having made the jump and the other halting in its place in the parking lot entrance. Remember the frozen fear face look? Well, she is kind of short and because her front wheel was launched on top of a 4" curb, only one of her feet could touch the ground. The other dangled uselessly while I sat laughing hysterically trying to process what was going on. Oh, and of course I had to take a picture before I even dismounted my bike, as I told her, "It's not funny right NOW, but it will be!" I got off my bike and she still sat there, kind of frozen. I asked if she was going to get off the bike and she firmly said, "I CAN'T!!!!! I can't reach the ground" with one foot and the other is literally holding her and the bike and her gear upright. The foot 'holding it all together', was naturally her kickstand foot. After a minute of breathing, she trusted me enough when I said she could get the kickstand down and the bike was NOT going to fall over. I mean, it was going to be REALLY close, but I left that out. Clearly, she wasn't quite in the moment to find it funny...yet. 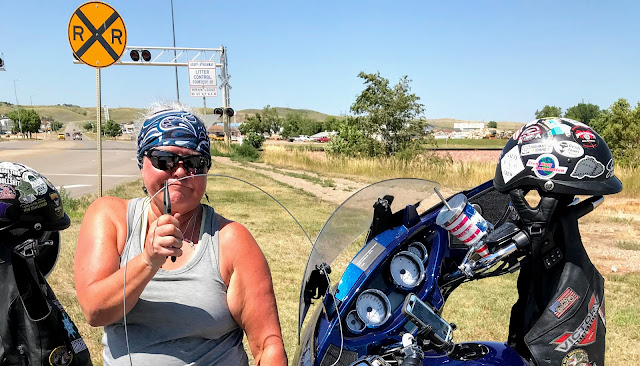 The good part of the situation, was that this was the second clutch cable changed out in the last 3 weeks, so it was SUPER easy! We had it fixed and were back on the road in 26 minutes flat! I still don't know how she managed to keep that bike upright after launching it off the curb and then the bike insta-killed because she was in too high of a gear for the (lack of) speed she was going. But, she did!
#SavURRide #CarryOne
After that debacle, we were back on the road soaking up the sunshine and slaughtering the bugs, basically the entire rest of the way out to Sturgis.  Around the sunflower fields were especially bad. I was trying to preserve my clean jeans - I had to ration them out over the next 7 days!!! 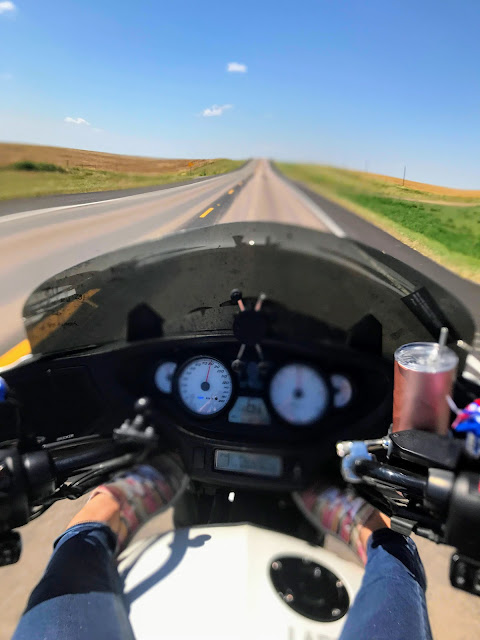 Just when the ride started to feel dull, ZZZZ! I took an unfriendly bee or hornet straight to the head. Right where my helmet meets my head, to be exact. You know, the one spot where it could REALLY get in there good by wedging between the brim of helmet and the grease of my forehead, which probably enhanced it's end of life path up my forehead. This is how much I wanted the ride there to be over - I never once thought of pulling over. Instead, I did the classy move - I smacked the front of my helmet/my head repeatedly, not wanting to stop beating myself because I wanted to make sure it was dead. Like, dead-dead. Little jerk. He wasn't going to wreck my ride, was my thought as I pulled his guts out of the brim of my helmet while my helmet kept getting a little tighter and a little tighter from the swelling. After a couple minutes, my helmet was so tight it was uncomfortable, but again, stubborn and not wanting to stop, I simply propped my helmet up like they do in the movie Dumb and Dumber and kept on going. I am sure it was a trip to watch the situation unfold. Swerving all over my lane, swearing up a storm, and smacking my head silly...followed by making the motion of wiping profuse sweat off my forehead (aka killer hornet guts)...then the calm after the storm, I stopped swerving, my mouth stopped moving aggressively in the breeze and I just propped my helmet up, now basically useless helmet.  Anyways - I survived, the mark was evident the whole week I was in Sturgis. It was one week before I got the stinger out of my head. Literally. 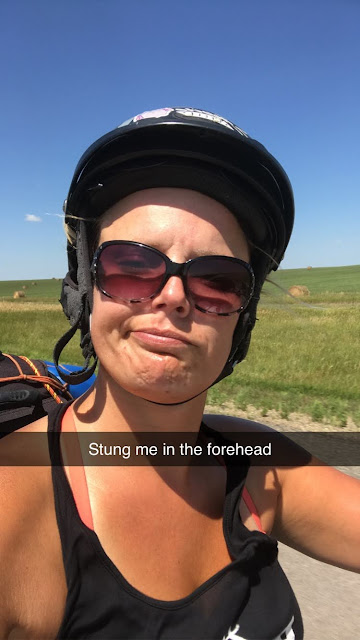 We arrived at camp, got settled, and marched up to the local bar to say hi to our favorite bartenders and just RELAX after a chaotic day. Camp was quieter than usual. Lots of shade options! 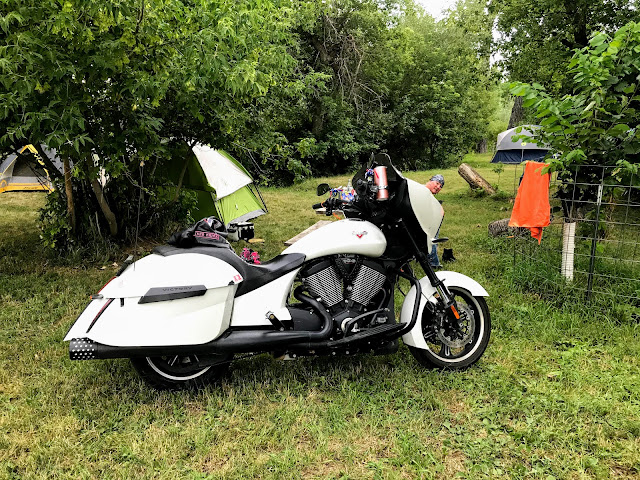 We were at least treated to a gorgeous evening sky just before the storm rolled in. 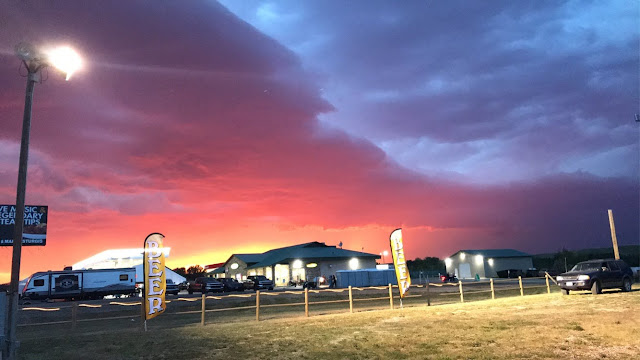 Moral of the story:  If you have a Victory motorcycle, go on Sav-UR-Ride and buy a clutch cable for your saddlebag. Best $45 you will ever spend. 2nd: Karma. It does exist.