Jaunt up the North Shore of Lake Superior with my dad 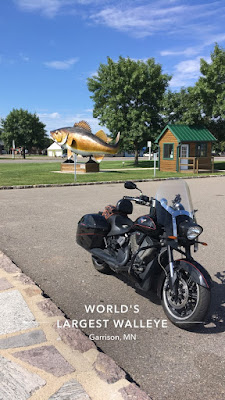 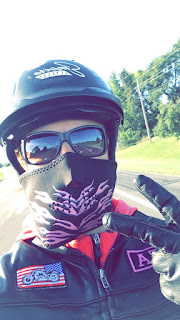 Trek north to hang out with the fam and ride with my dad from north of Duluth up to Grand Portage, MN to see the sights, hit some curves, and maybe see some fun wildlife! Pretty brisk start, but at least the sun is shining!!! Naturally, trying to leave Minneapolis on a Friday afternoon is nothing but brake lights and bumper to bumper traffic... everyone trying to escape the city life for a weekend of relaxation! Add in some MN construction... and this is what we know as summer!! Still always a great day for a ride, regardless. In my quest to do one touristy thing every time I head north, I took a different path this time and stopped at 'the World's Largest Walleye' - wonder if the seagulls sit there thinking the fish is real?!

Got to my parents and we headed out up to Ely, MN and over on highway 1 towards Finland, MN. They recently repaved the road - so between amazing roadtop and curve after curve, it was an awesome jaunt north and west! Some of the leaves are starting to change colors... boo!!! I don't want fall yet! 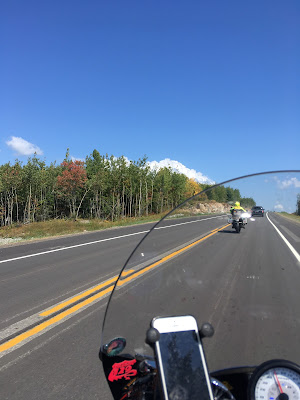 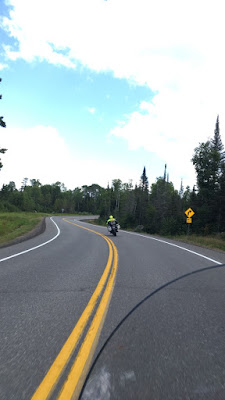 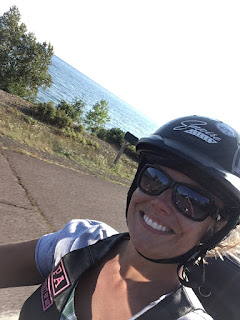 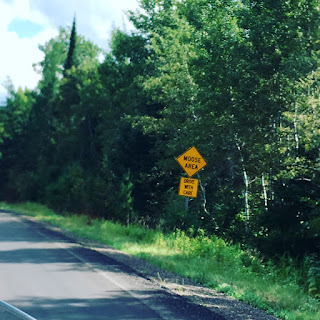 And as usual, good old Lake effect is in play - warmer by the lake in the fall, colder the rest of the year.
I love the last little stretch of 1 as you near Lake Superior, the road goes up, up, up, then as you crest the hill there is a gorgeous view of Lake Superior as far as the eye can see... one of my fave  sights! 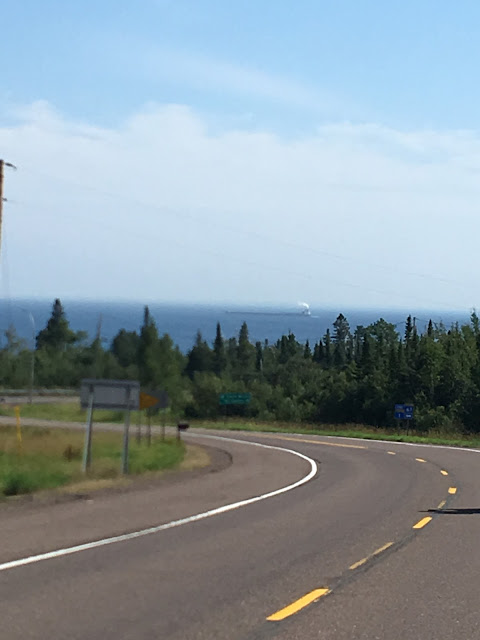 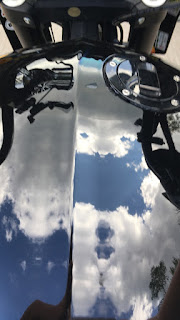 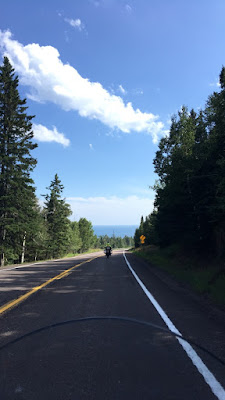 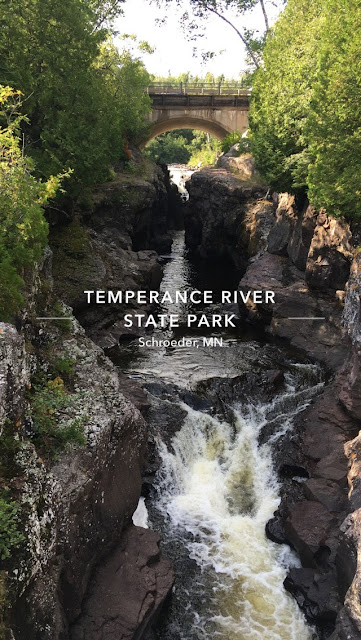 Dad and I stop at a few tourist attractions on the way - one is Temperance River.. my fave State Park in MN. The river weaves deep into the rocks of the North Shore creating amazing waterfalls and canyons to look over!! 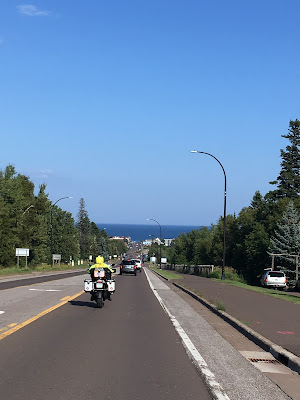 Next up we stop in Grand Marais at the visitor center to inquire about camping this weekend. We made no reservations as we didn't really have a plan aside from going north where the weather was going to be nice. The guy at the visitor center was great! He called camp grounds to inquire on openings. Several campgrounds were actually booked due to the nice weather I suppose. He found one in Grand Portage with an opening, so we reserved it on the phone, then chatted more with the nice guy and headed north once again. Visitor center humor in the fall. I love it! 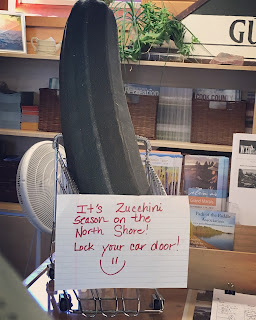 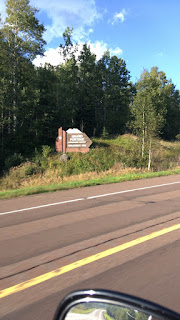 We arrived in Grand Portage just as night was starting to creep in. The Marina campground was packed and there were only 2 spots left when we called, they are now completely booked. Whew!! Glad we stopped at that visitor center! We got checked in and headed just up one lane and found our camp spot for the night. The campground is located right on the waters of Lake Superior behind a little marina. The Grand Portage Casino is a few blocks away as well as a gas station that is more like a mini Walmart of the north shore, carrying everything from fresh fruit to deli meat to conveniences. 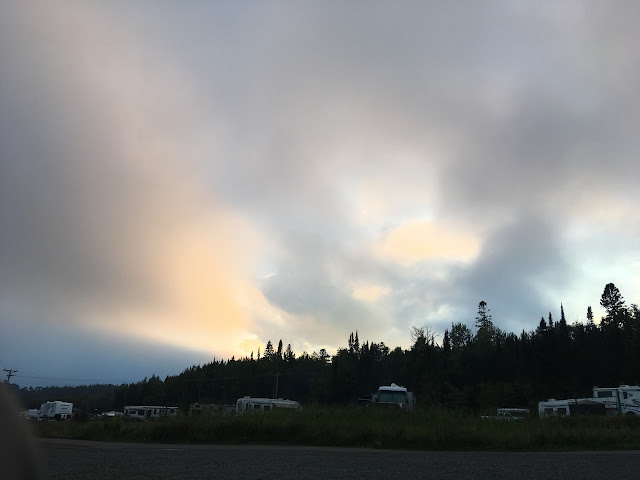 We get our tents set up and are starving so we walk down the path to the casino for dinner. Like most casinos, this one had an 'all you can eat' buffet. I never get my money on those because I can never eat enough to make it worth it. But casinos typically have a great buffet and this didn't disappoint. We filled our bellies, walked back to camp and started a fire to relax for the night. 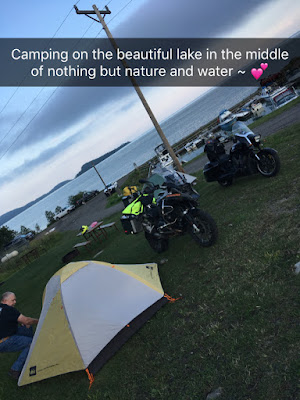 A couple hours later, just as we were talking about going to sleep, a big rig RV was coming down the road of the campground. The campground isn't real big and the road through it is on big S curve between units. The guy missed the camp turn and wound up down at the marina.. the way that he backed that HUGE RV up and spun it back around was impressive.. I literally mentioned to my dad that the guy has to have done that a time or two! He started back up the hill by our tents, where the road curves to the right and then a relatively sharp left turn. As he went to corner to the left we heard a big THUD and saw the rear end of the RV dip WAY down. The guy hit the gas and we could hear the tire spinning on the left side. Followed by whoever was in the rig yelling at the top of his lungs in frustration. After a minute or so we grabbed our headlamps and walked up to see what he was hung up on. It wasn't good. He cut the corner too tight and his left rear wheel went off the roadway. Which wouldn't have been a problem in theory.. but there was a HUGE drop where a culvert, hidden in the grass and bushes, hid. His tire was high up in the air on the edge of that culvert. No way he could get that thing unstuck without a wrecker. Which doesn't sound like a big deal in general. Except for the fact that we are literally 9 miles from Canada on a Friday night at nearly midnight. Oh and there is NO cell service here. No matter what cell provider you have.  Odds were not with this guy. He gets out of the RV and was understandably pissed and freaking out. He asked if I would walk down to the casino to tell his wife that he couldn't come get her.. she had a broken foot and was waiting for him to pick her up. I said I could walk down to the casino but giving her a ride was not an option as I had the bike. I walk down and see her sitting outside and tell her what happened. I then went in the casino and talked to security, asking if they could give her a ride up to the RV - I had a motorcycle... that wasn't exactly going to work out for her. I also asked if they could call a wrecker and explained what happened. I started walking back to the RV. A couple of people walked up and said they have been staying here for 10 years on this same weekend and they see this happen every year. One would think the casino would put something up to prevent this - you cannot see the culvert nor the drop behind all of the tall weeds and grass. There is no way to know of the hidden danger. Even a reflector in the ground would help!! We hang out and watch 'the show'. We decided it was our midnight matinee... funny to us, not to that guy. He was a BIG dude and I could feel his blood pressure rising and rising... I was hoping he wasn't going to have a cardiac. He did not look good throughout the event. Turns out he told my dad while I walked to the casino that they had just come back from SD and in the midst of construction there, he ripped off the right mirror on a construction barricade or construction vehicle, not sure which. The couple is rom Wisconsin. This is not a great trip for them so far!!! 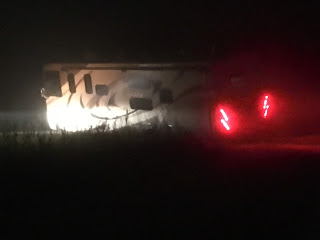 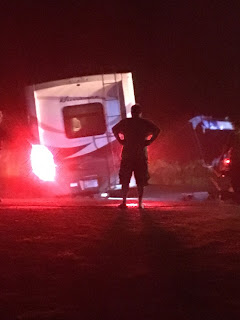 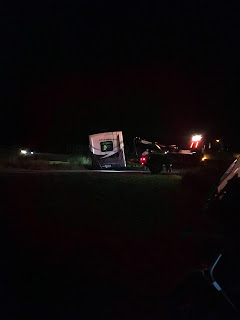 The wrecker came about an hour later and we assumed he would use the tow hitch on the RV and just pull the rear end back up on the road. Nope. He went off to the side and hooked up chains.. he was going to pull it sideways. Nothing about that seemed right, but I assumed he has done this a time or two since it happens more often than one would think. He made several attempts to get the chains on and started to pull. All we could hear is plastic moving. No Bueno. He got out and re-arranged the chains at least 10 times.. well over 1.5 hours later, after security had come out and a local police officer were on scene, the wrecker driver hooked up the chains and began to pull.. up and sideways. Sure enough, it started moving. It was finally free! I cant imagine what it cost the poor couple to get that thing out... And as they drove away, I couldn't watch them maneuver that corner again... they made it, thankfully. That was quite the night time entertainment!!


A great day of riding with my dad in such beautiful country! 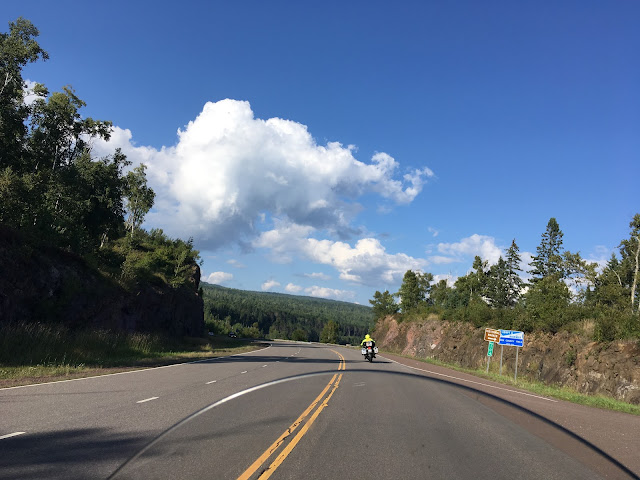