- May 12, 2020
I've never really done a REAL April Fools Day joke on anyone, aside from the usual one-liners. But this year, I happened to wake up in the middle of the night, unable to sleep, and was scrolling through Pinterest looking for who knows what ideas at 2am... when I saw it!!! An epic April Fools' Day Prank on my roomie - for after she got home from working her night shift!   It was a LOT of work stuffing enough clothing into the legs to make it look like a person who has been in quarantine for a month!!! 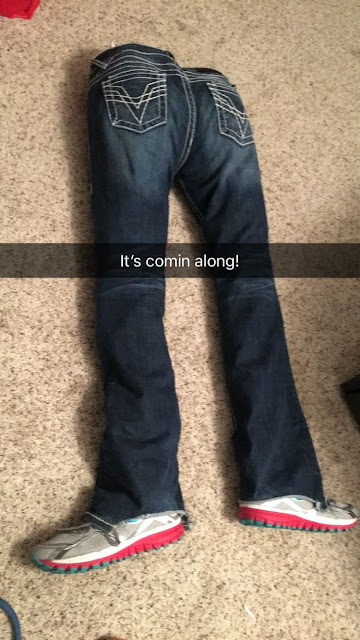 But the final product.. of THIS part of the prank, turned out great!  Wondering how she was actually going to FIND 'me', I set a few alarms on my old phone and set the phone in 'my' back pocket.. 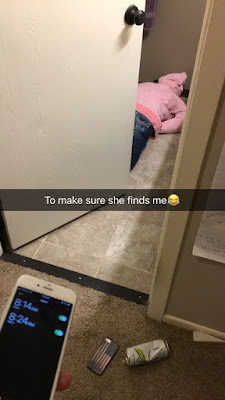 And then I waited.. laying under a strategically placed heap of sheets, waiting to capture the moment. 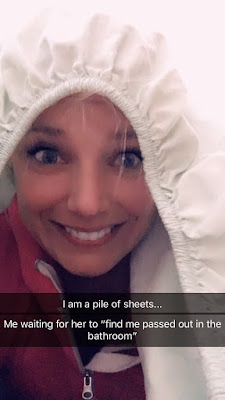 It took her forever - I had to reset alarms 3 times, but then she was making her way up the stairs and I just hid.. and waited for her to find 'me' - directly in the bathroom at the top of the stairs. But, then she passed the bathroom and instead noticed my bedroom door open, she said (to the cat): Is your mommy still sleeping? as she shut my bedroom door. Aka my vantage point to watch it unfold. Then she went PAST the annoying alarm, which I had made sure was on HIGH volume, into her room... and shut the door. And started laughing hysterically.  You see, as if my body prank and setup wasn't enough, I just kept going. I grabbed Christmas wrapping paper and began wrapping whatever was on her bed, and placing it right back where I found it. Only now it was a Christmas present instead of a remote...or iPad...or hair tie...or deodorant... 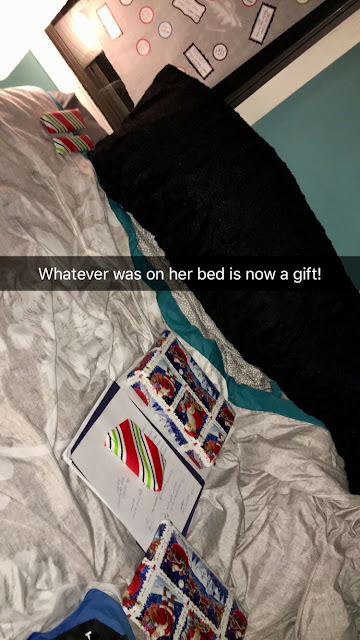 And then I did a shortened version of the post-it prank. 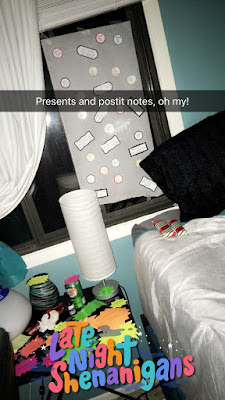 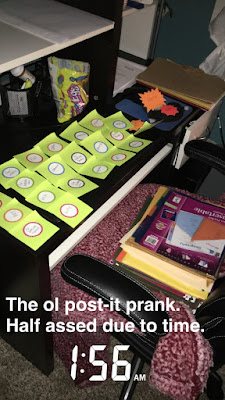 So I hear her laughing hysterically and then I hear her talking on the phone. NO!!!!!! I had now been laying under the heap of sheets for 30 minutes. I thought I was going to be there FOREVER!!! I mean, it was hilarious hearing her unwrap all of her own stuff while talking on the phone... but I really wanted to be 'found' so I could move on with my day!! It turns out, I had set the stage TOO well. You see, I needed her believe that I was passed out. So I staged a party in the kitchen - complete with darts all over, empty beer bottles all over (OLD beer I needed to throw out anyways!), a 'bloody knife' as though I had cut my finger on the super sharp knives she has just commented on last week, and then to top off the party scene, I left a random shoe on the step. Oh, and a fake score board. So because of all of that, she assumed I was sound asleep/passed out in my room, not to be disturbed. 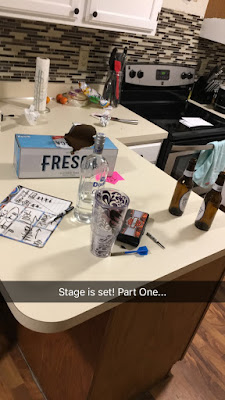 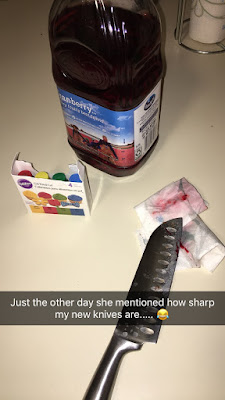 I ended up having to text my bestie and ask her to somehow convince my roommate to look for me. Because, after alll this time, the alarms had shut themselves off, and she was NEVER going to find 'me'. I couldn't wait under a pile of sheets forever!! That, and my cat had taken up 'my' leg to sleep on, making it flat as a pancake and not believable. Any longer and my body would be a full on cat bed. My roomie replied, "She's clearly passed out and needs the sleep after last night"- or something to that affect. A few more messages between the two and my roommate was on the move. Bestie told her 'we were supposed to video chat about something really important and I can't reach her'. And that is when she found 'me'!!!!! 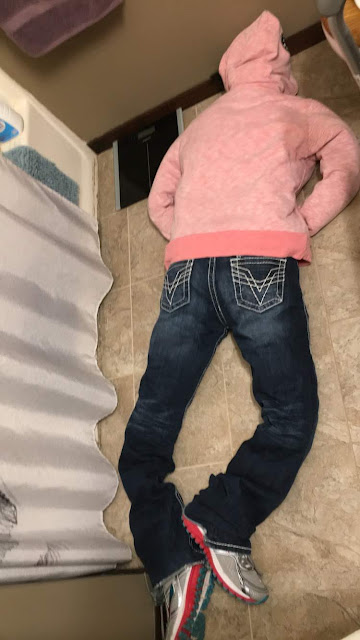 After all that work, I had to take a picture with my 'stunt double'!!!! 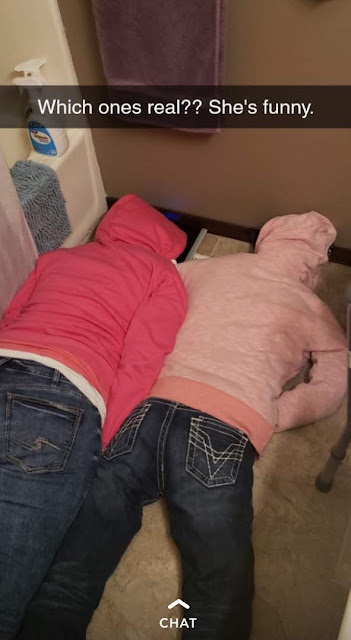 It was an epic April Fools' Day!!! I don't know that I could ever top it all.
Oh, and a few days later she found the very last prank: 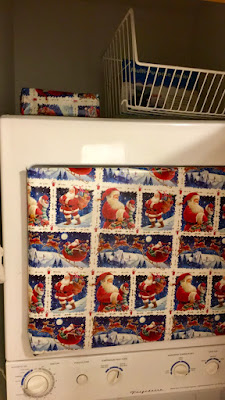 What's the best April Fools' Day prank that you either pulled on someone or had done to you????