The Blue Hole in Santa Rosa, New Mexico - Visibility is 100' with the water a constant 62 degrees. A heavenly stop in the July heat!

- October 08, 2019
Summer (2013 and) 2018 - Riding through New Mexico, I didn't have a lot of expectations, and honestly, not a lot of hope that I would like what I saw. But once again, I was wrong! There are a lot of cool things in New Mexico - some major attractions, and some off the beaten path stops worth your time! Thanks to H.D. for introducing me to The Blue Hole - years ago!!!
For starters, Route 66 goes through the state. And that, in itself, is a cool piece of history. But along Route 66, in Santa Rosa, is a random watering hole stop, worth your time! 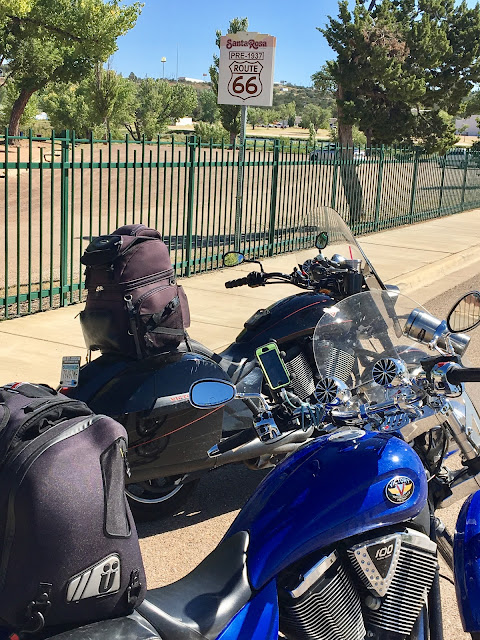 In Santa Rosa, NM, off the main path, and tucked away in a quiet little part of town, lies the Blue Hole. It sounds odd, and it kind of is. But, in the midst of a New Mexico summer, where temps are a consistent 100 degrees, the Blue Hole is THE place to be. Just like it sounds, its a watering hole that is amazing shades of blue (no filter) with 100' visibility. Used by locals for scuba diving (its 81' deep) and cooling off in the heat of summer with its constant water temp of 61. 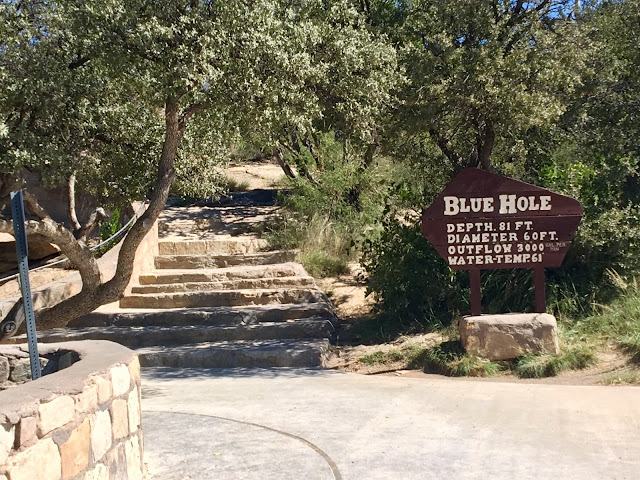 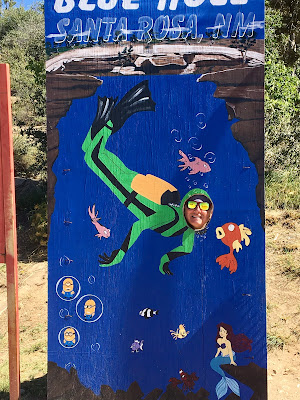 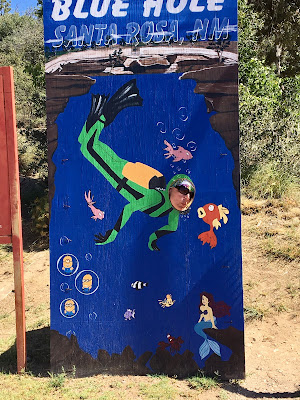 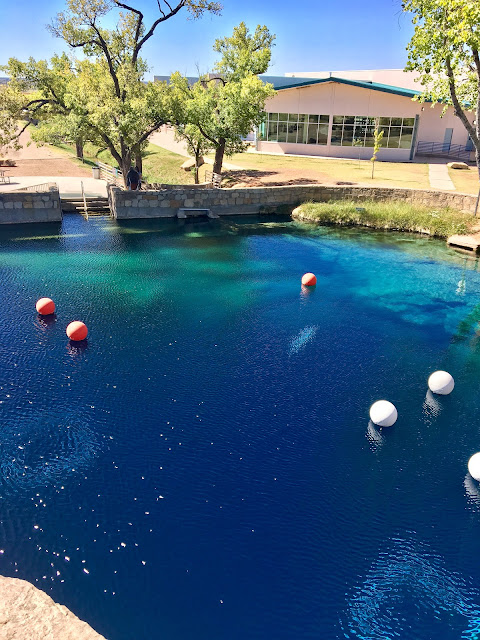 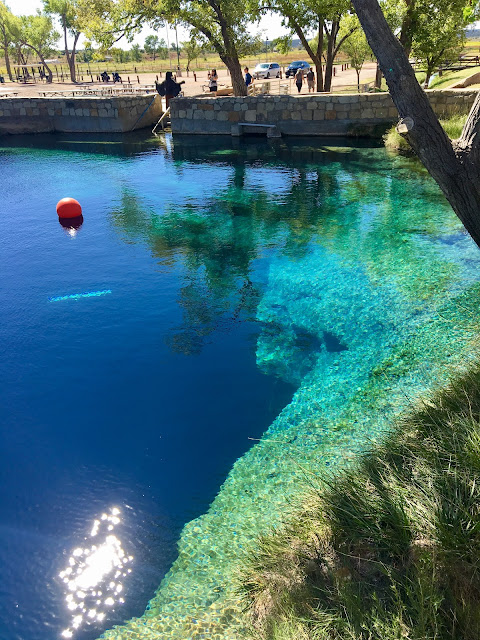 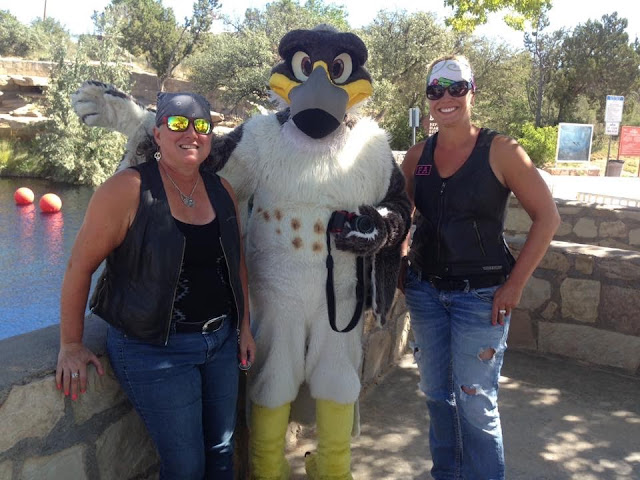 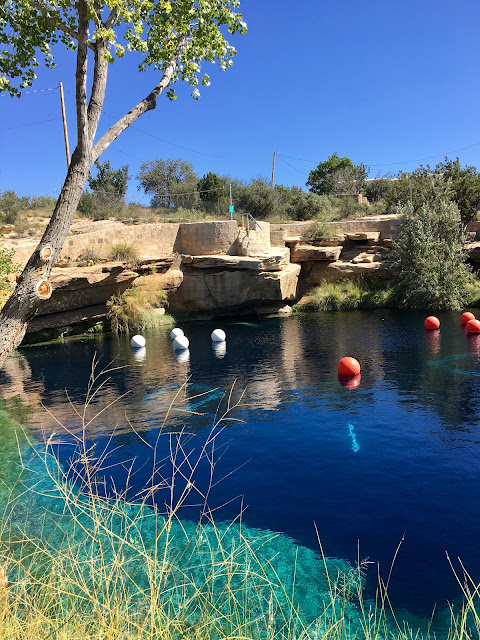 More about the Blue Hole from http://santarosabluehole.com/
The Blue Hole of Santa Rosa is a circular, bell-shaped pool east of Santa Rosa, New Mexico that is one of the most popular dive destinations in the US for Scuba Diving and training. The Blue Hole is an artesian well that was once used as a fish hatchery (1932). It is a clear blue body of water with a constant 62 °F (17 °C) temperature and constant inflow of 3,000 US gallons per minute (11 m3/min; 2,500 imp gal/min). While the surface is only 80 feet (24 m) in diameter, it expands to a diameter of 130 feet (40 m) at the bottom. In 1932 Blue Hole became a National fish hatchery, morphed into the Blue Hole Recreation Area in the seventies, and more recently expanded to become the Blue Hole Dive and Conference Center. Visibility is an astonishing 100’, due to the fact that the water completely renews itself every six hours—it’s truly never the same lake twice. What doesn’t change is the temperature—a constant 62 degrees, ideal for storing a fine Cabernet or tossing in the kids on a hot summer’s day. Within a few minutes of exiting the interchange, they’ll literally be climbing the walls—the lovely rock surrounds of Blue Hole, that is—and jumping in.


After dunking our heads, we continued on in the New Mexican summer heat.


Stiffy went to fix her hair at the next gas stop...Laughing, I said "What are you doing?" "Using the window to fix my hair". I start laughing even harder and she cannot figure out why. Until the cop sitting inside waived back. LOL Now its a running joke - if a cop parks next to her, I ask if she needs to do her hair. One officer recently asked if she needed to fix her hair and said he would wait until she was done if she needed to. Forever a laughable moment! 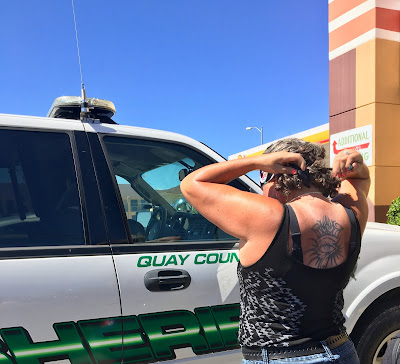