- October 12, 2019
A flat tire on a motorcycle. One of those things I have always dreaded. And of course we had left Niagara Falls, NY, around dusk and were making great time, on track to make it to MN by the start of the Vikings football game... until we weren't. 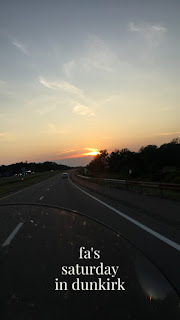 Knock on wood, it didn’t happen to me, but it did happen to Stiffy on our way back to MN from Niagara Falls, at 2:30am in the middle of no-where at the Ohio Indiana border. A flat (rear) motorcycle tire. I was in the lead and Stiffy would fall back a ways. Thinking she was messing with her music or needing a stretch break, I would slow down, then she would catch back up for a bit. But then, just as three semis were cruising up in our rearview, she disappeared to the side of the freeway. I pulled over a little ways up and waited. She texted that she had a flat tire. DANG IT! For once, I was HOPING she was going to text the usual (“My phone flew out of my holder” and she would be running down the side of the highway to find said phone). She said she just felt her bike pulling her all over like she was on a terrible grooved road. Thankfully, she remained upright the whole time and didn't panic. I contemplated going the wrong way down the freeway to get back to her but figured that was a poor idea since she was sitting just over a little incline, the only traffic around us had been semis’ and just prior to her pull off point, there was a sign that said “Semi’s right lane only” for the upcoming toll booth. So, I headed eastbound to turn around and come back to her… naturally there was zero turnaround areas for a solid 5 miles, which at 2:30am, in pitch blackness, and in light of the situation, felt like 100 miles. While the pull off point she was at was well off the side of the freeway, I still didn’t like the idea of laying on the ground as semis whipped by my head. Just ¼ mile up, and on the left, there was a large/wide pull off area with barrel cones and a street light. I had her pull up to that spot – knowing its bad to ride on a (rear) flat tire, but safety trumped the situation. 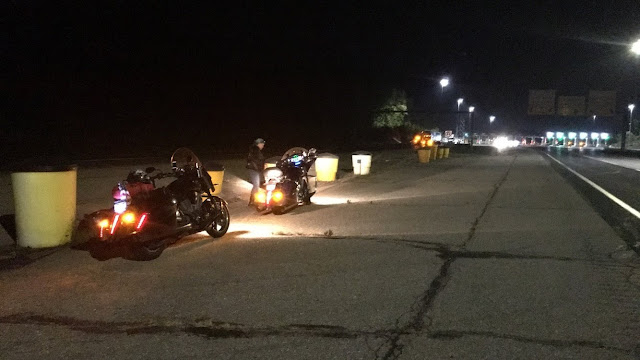 We pushed the bike to find the flat culprit – there was a big hole in the dead center of her tread. No shrapnel intact, just a jagged hole. My dad has always been a lifesaver, whether he realizes it or not. All those years for holidays that he would get me random tools and stuff for the bike – I sometimes thought he was a little overkill with things, but he has never done me wrong! Low and behold, I dug through my saddlebag and pulled out the Stop & Go Pocket Tire Plug kit that he had gotten me years ago. 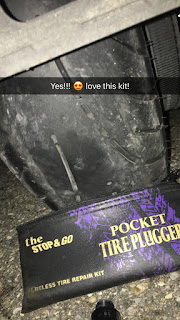 It just sits in the crease of my saddlebag, not taking up much space, so I rarely think about it. Thank goodness! It comes with a little instruction sheet. But between me having raging ADHD and the situation having our nerves a little more on edge than normal, I instead busted out my phone and searched YouTube University on how to use the kit. It seemed simple enough.

And even in the midst of the dark situation, we got a good laugh over the terms used in the YouTube University video… “Reamer” and “Prober” and “Mushroom head plugs” seemed to be extra hilarious in that moment. Hey, if you can’t change the situation, you can laugh about it right? So, using two high-powered cellular phone flashlights and the beam of my bike’s headlight, I set off the fix the problem. 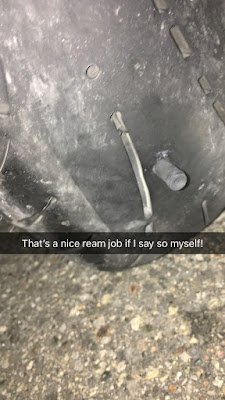 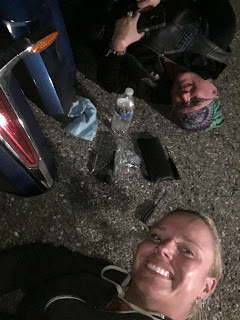 It didn’t take too long, and I had the plug in the tire.
Miracle!! Now… for the bigger issue. Air. Seeing as how we couldn’t reach our faces in between the tire spokes to blow the tire up, we needed something more. Naturally, my little air compressor was tucked away tightly on a shelf at home in Minnesota. Why would I need to bring that?! Luckily, we on the Ohio-Indiana border, and there was a toll booth not even ½ mile away. 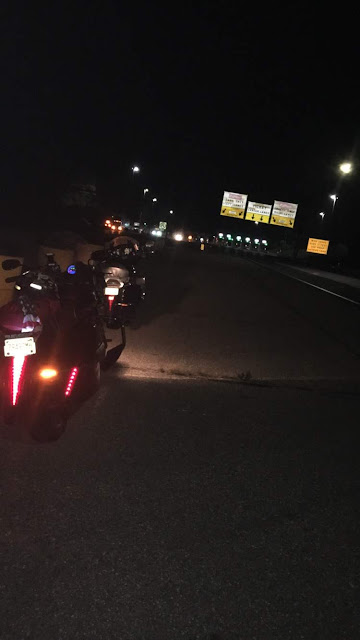 My plan was to walk to that booth and just ask every passing vehicle if they had an air compressor with them. Odds had to be in our favor, right? Between truckers and haulers, I was sure it would be easy. Well, on the walk to the toll area, we noticed a semi on the shoulder, with a tow truck parked just behind it – after talking to the truck driver who had a flat tire, we were certain the tow truck driver would help us once done with the trucker – and with an ‘unnamed energy drink ‘that can get you from here to MN without one wink of sleep’ we were walking back to the bikes to wait. Just as we turned around, there were flashing lights and an Indiana State Patrol car pulling up to our bikes. It was our lucky day, if we had to reframe the definition of Lucky in that moment!!! 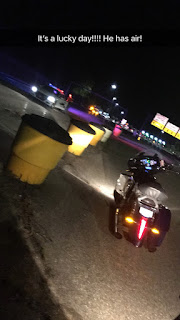 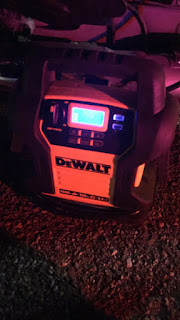 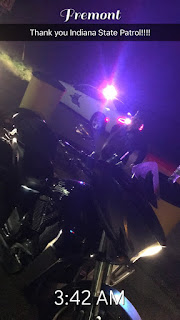 We explained what happened to the cute State Trooper – by cute, I mean, he was incredibly professional, hat and all, and all of 5’6” and 100# soaking wet. He handed me the air compressor he carried in his trunk, showed me how to use it (too quickly), and off he went to his car. As we waited for the tire to magically inflate with his DeWalt air compressor, he took our info down, and then gave us some resources in the event my miraculous plug fix didn’t hold. Let me tell you, it was incredibly difficult to resist asking for selfie (or a sticker for that matter).. but given the impression of the patrol officer, I felt that he was slightly more mature than both of us combined and would not be interested in either a selfie nor a sticker giveaway. So, I settled for a sly picture instead. We googled the nearest gas station – figured we would head there to check the plug status and get a real fix in line. We made it off the toll road, and of course had issues with the toll booth… just as rain started to fall. Go figure. We made it to the gas station, which would then become our home away from home for the next several hours... 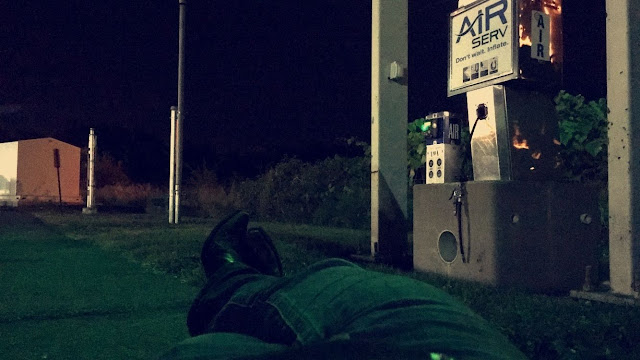 to our dismay, as the plug was leaking already. There was a 24 hour truck repair shop just a few blocks over, so Stiffy walked over and was quickly denied assistance with a motorcycle tire. This was the common response “We don’t work on motorcycles”. My internal response was “But it’s a freakin TIRE, that happens to be on a motorcycle. I will take the stupid tire off myself if that is the problem” (Note: Using YouTube University of course, as I have never taken off a rear tire…). After several phone calls and inquiries, we were stuck without a solution. I replugged the tire, that plug also didn’t last. The hole from where the shrapnel took aim at her tire was not round – so the plugs weren’t reaching all sides of the hole. I then took to social media.  I posted on Victory Motorcycle Owners Group website and then I recalled a group that I recently signed up for on Facebook – North America Biker Rescue – if you haven’t heard of it, look it up and join!! Its AMAZING, and one of the main reasons we ever got back on the road. As we were sitting in that gas station parking lot, feeling nearly defeated at 5:30am on a Sunday– as no bike shops would be open on Sunday.. let alone Monday… - a truck pulled up, having seen our post with the gas station info on it, and offered a trailer to wherever we needed to go to get back on the road. Things were starting to look up. By 7:30am, on a SUNDAY, we had responses from folks offering a used tire, all the tools to do the job, a bike lift, and a garage space to use.  Oh and we got to see the pretty sunrise LOL 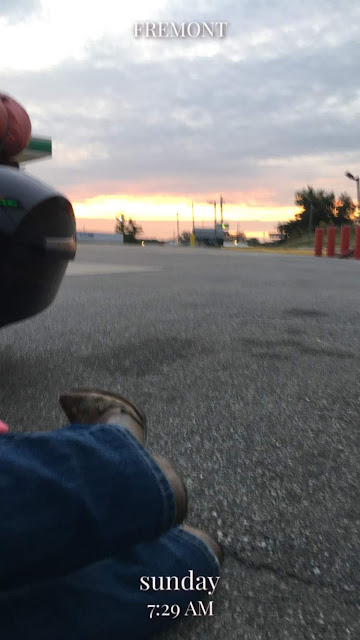 The bike was being loaded onto a trailer to be brought nearly 50 miles west… out of the trailer owners’ way, just to take care of a fellow (random stranger) biker. 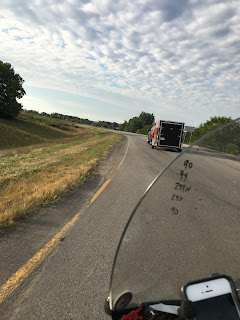 The biker world is truly amazing – we went from utter defeat, laying in the parking lot of a gas station in Indianola, IN, watching the sunrise and hoping for a miracle.. to being back on the road within 8 hours of getting the flat tire. And oddly enough, all the folks that arrived to help out that day were Victory owners!

Words cannot describe how THANKFUL and APPRECIATIVE we are to ALL of the folks involved! From the Social Media shares, to the Facebook messages, to the offers of assistance, to the networking that happened behind the scenes from folks near and far – none of whom we had ever met before in our lives – it was absolutely incredible to feel the support and biker love!!!!  We are forever grateful and will definitely pay it forward!!!!!! 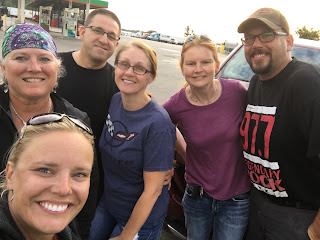 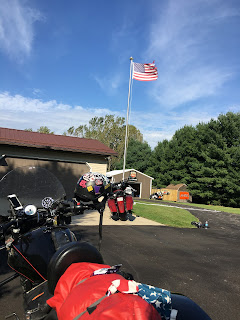 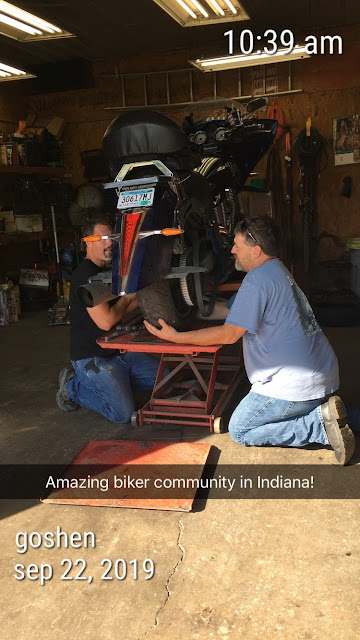 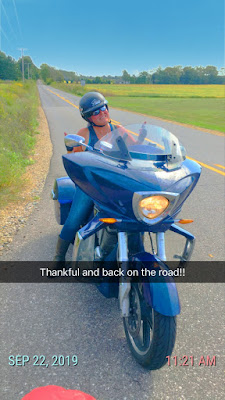 While we didn’t make it back to MN in time for the Vikings game at noon, as we had hoped when we started out the trip back from Niagara Falls, we did make it back to MN by dark. And we had a renewed hope in mankind thanks to all the folks who spread the word for assistance needed and to our new friends from the Michiana Victory Riders who saw our Chrome Alert and literally saved our day(s)!!!!! We are forever grateful and will definitely pay it forward!!!!!!


Other pictures:
Playing Miss Mechanic at 3am on the side of the freeway on the Ohio/Indiana Border... and acting like I knew what I was doing (while streaming YouTube...) 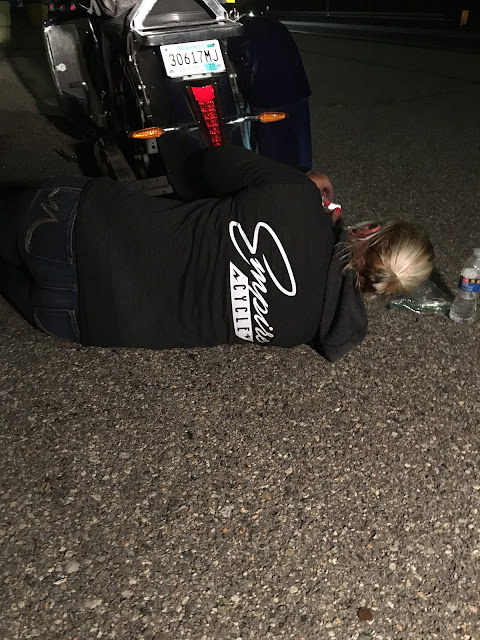 The semi with a flat tire... who gave me the mystery energy shot.. #ButDidYouDie #No 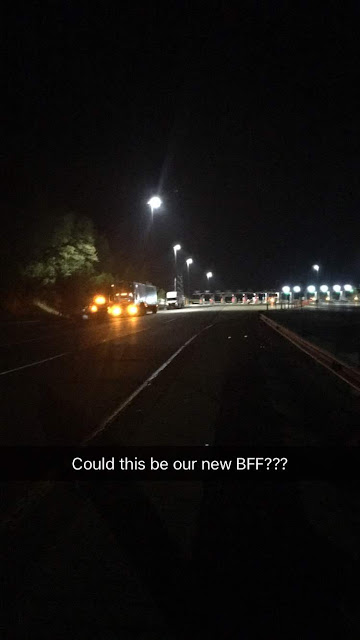 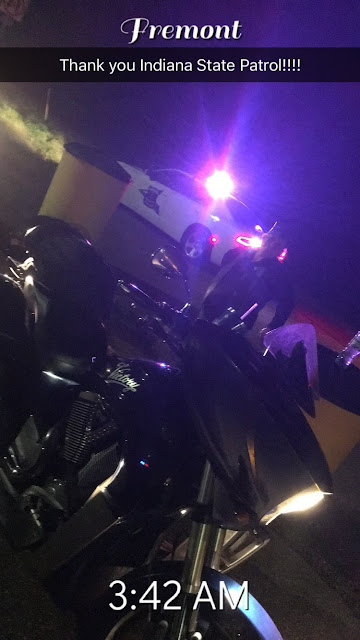 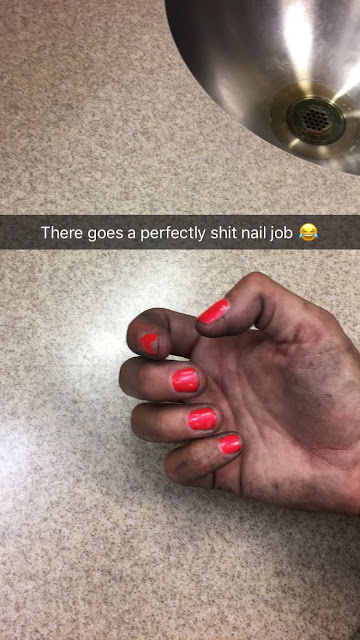 My lil resting spot - I'd been awake over 24 hours and counting at this point.. And still had 10+ hours of riding to get home to MN. 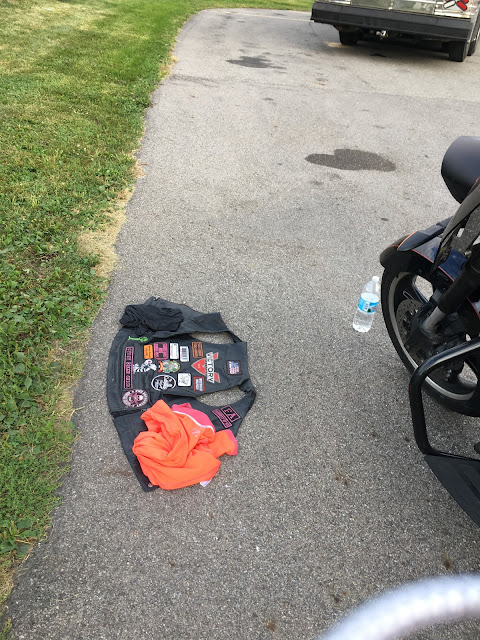 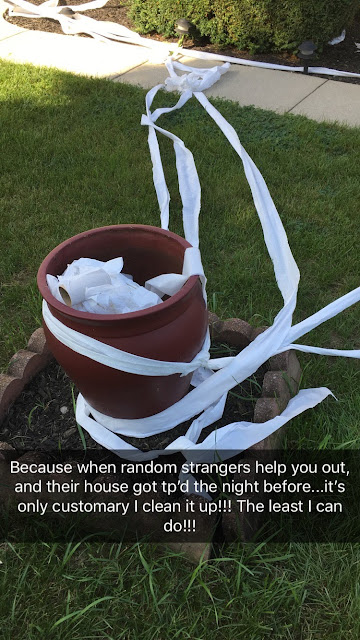 So, was Niagara Falls in 3 days worth it? YES! 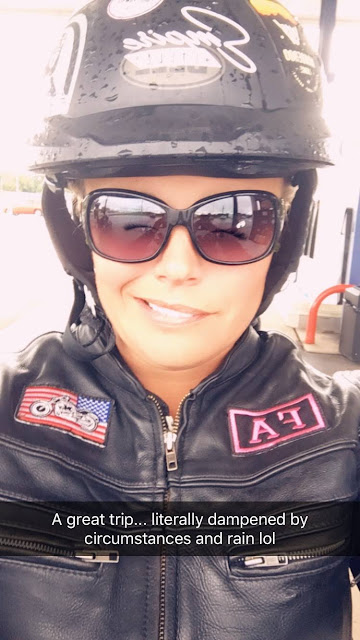 Familiar signs - a wonderful sight after being awake for 38 hours and counting.... 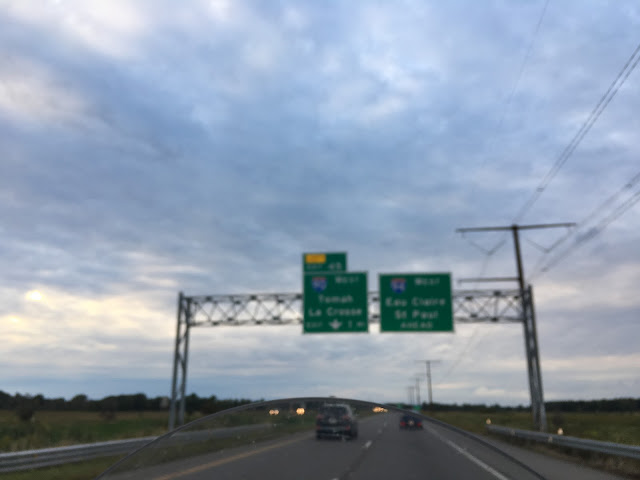