Scraping Floor Boards through Arkansas... with the Iowans right behind us!!

NW Arkansas Day 2 - MN vs IA Challenge: A little Arkansas, a little Missouri, and a LOT of corners!!

We met the Iowan boys at breakfast the following day and while a couple of them were not feeling overly great due to imbibing a bit too much the night prior, they were all good sports and agreed to ride along with us. I said that I would try to take it easy, but this is not easy for me to do as I love to ride fast around corners, so if nothing else, if there was a turn to be made or a stop sign, I would wait to make sure we had everyone before cruising on. 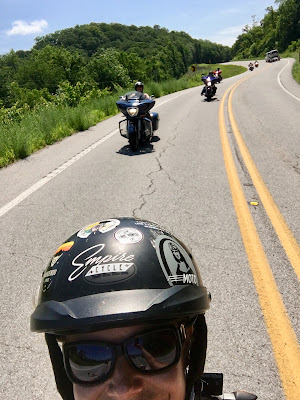 So, with 5 bikes in tow, we headed west on 62 to Rock House Rd, which from the ‘outside’ looks like a simple little residential street with narrow paths and no center lines. I can only imagine what the guys thought of my route after turning off the main drag... "WTH is this little quiet residential street in the hills of ES going to lead to? How is this 'corner heaven'? Where is she taking us?" It quickly changes to a remote road with lots of corners and total tree coverage, making it feel like you are in the true backwoods. Which can be either serene or creepy depending on the daylight (or the company... LOL) - kidding. 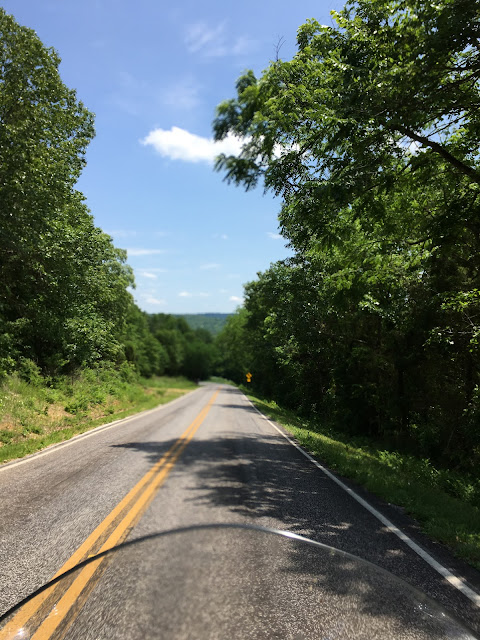 We winded through the overhanging trees, past random driveways with ginormous houses, and around corners full of gravel and then we turned left onto 221 – the destination I was headed for - a fun road that the locals use to ‘practice racing’ on the long sweeper corners.(We learned that on the last visit) Just as we cleared traffic and I downshifted to get ready to blast the upcoming corners, I found myself quickly downshifting and hitting the brakes.  It was on this road that we encountered our first crash scene of the trip – there were a handful of first responders hanging around, one bike upright in the grass on the right side of the road, and an ambulance that was just taking off towards town. I have no idea what happened or if there were major injuries, but no one appeared overly distraught and the ambulance that we ended up behind on the way out was in no particular rush to get to the nearest hospital (no lights or sirens going). Either way, no matter how ‘big or small’ such a scene is, it is always a bit unnerving to see a bike wreck.
We stopped shortly after the wreck scene to grab some water and make the next plans. 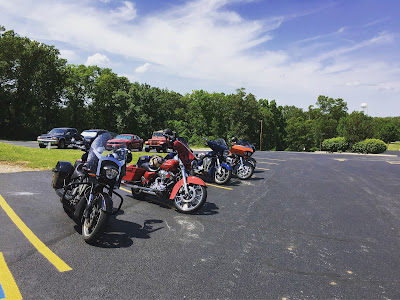 We were bs’ing about the wreck and then about how scratches on a bikes paint job are the absolute worst. One guy had just gotten a new bike and dumped it the day prior, causing his black paint to have white gouges in it. I can relate as my once all black bike has many unique additions to the paint job as well. Upon hearing his disgust with the scuffs, I quickly exclaimed that I had a temporary cure for his bikes ailment… and whipped out a miniature sized black erasable marker, which is velcroed to the inside of my saddle bag at all times. I use said marker on my bikes scuffs in a pinch and offered it up to him. At first, he, being covered in tattoos, a cut off HD shirt, and looking like a true biker, laughed, but then took the marker and gave it a whirl… “It really works!” he said shortly after.. “For one wash!” was my response. Not gonna lie, I kind of felt like a badass at that moment.... even if it was because of an erasable marker! 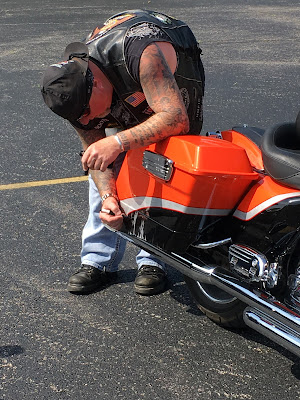 Nothing funnier than seeing a big burly biker dude with lots of tattoos using a mini-erasable marker to fix his oops on the paint job!! Then another guy on a blue bike said he had some scuffs… voila! It was his lucky day too! I also had a blue marker in the bike that I offered up to fix his paint job.. ‘until it rains’! You might ask why I have a marker velcroes into my bags... Its the little seemingly stupid things in life that I know that seem to come into play at the most opportune times to make me seem so much smarter than I otherwise am ~ like my redneck GPS. Also known as using an erasable marker used to write directions on my windshield. I learned this trick from a biker who taught me how to corner, how to pack for a long bike trip, and how to not have to tape a piece of paper to my windshield whenever I was going somewhere. Because lets be real, I can remember up to 3 turns but then my ADD kicks in and well... I may be headed for Arkansas, but next thing ya know I see the Texas border sign <-- true story..for another time.

The Iowans were proving to be a lot of fun but I was here to ride and was ancy to get to scraping around the corners!  But first, we had to reroute and swing back through ES to grab some helmets, as the route would be taking us up through MO and some of the boys weren’t planning on that. I might have forgot to mention that part as I usually wear a helmet so it doesn't often phase me on what state requires helmets. We grabbed helmets and made our way north out of Eureka Springs. As soon as we crossed the MO state line, we came up to 86. Shelly knows this is ONE OF MY FAVORITE roads….it is corner after corner after corner with brand spanking new pavement last year. We approached the stop sign to turn onto 86, I looked back with a smirk, and off I went. We already established that I would wait for everyone at the stop sign at the end of 86. Every so often I would slow down to make sure I saw headlights before cruising along at high speeds around all of the super fun corners.

I don’t know when it happened exactly, but at one point I slowed down and looked in my mirror shocked to see a headlight not too far behind me. And it wasn’t Shelly. Shelly and I ride together a lot - we have a high level of riding trust - I know she is there, she knows my style of riding, and we can ride hard with lesser communication that most. For example, she knows that I get bored on the freeay so after I pass someone, we go back into the right lane after she clears the slow-by...only to catch up to the next slow person and repeat. I could stay in the fast lane the whole time.. but I am easily bored and sometimes (sadly) this provides a little 'excitement' along the way. That's not really the right word, but you get the idea. I cant sit still and I cant ride straight stretches for long distances without getting ancy to move the bike around a little. On corners, we take the WHOLE lane and if someone behind us is 'feeling' the corners more than we are, we let them pass. No one wants to ruin anyone else's fun! It is all about riding within your limits and abilities - which vary day by day depending on weather, how much sleep we got the night before, and where we went out lol .  Anyways, back to the corners of Arkansas... Shelly and I have ridden them enough where we blast over the suggested speeds often and with accuracy of staying well in our lane and upright. I still remember the first trip to Arkansas with ladies who had ridden there before and I remember thinking they were absolutely CRAZY for going into a corner at 70mph when it was posted at 35mph. I would panic, fall back a ways and then panic until I was around the corner and realize it wasn't that bad.  Just as promised the night before, couple of the Iowa boys were proving their cornering worth and keeping stride with me quite well!! After several twisty roads they were keeping up a little too well.. my ego was feeling the pressure and not having any of it, I leaned back in the saddle and sent off on a mission to not be beat by a boy on the curves…. I narrowly kept my reign as a cornering champion, but it was a close call on a couple of occasions. I cant say that I have ever had that happen… someone say “I can ride like hell too’.. usually means I will be waiting a lot… but today was not that day! 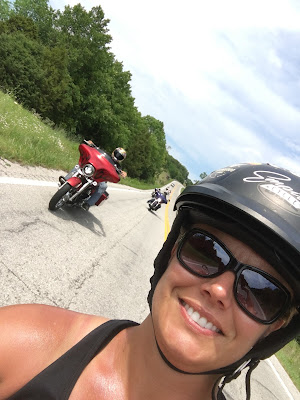 That is NOT Shelly! LOL

It was a fun day of cornering in the sunshine and we didn't have a lot of traffic. When there was traffic, there happened to be ample passing room and we kept a solid pace through the day, ending with roughly 155 miles and 4.5 hours on the saddle. By the time we got back to ES, we were ready to park the bikes, relax, shower, and see what the nightlife had to offer.

Map of the day's ride: 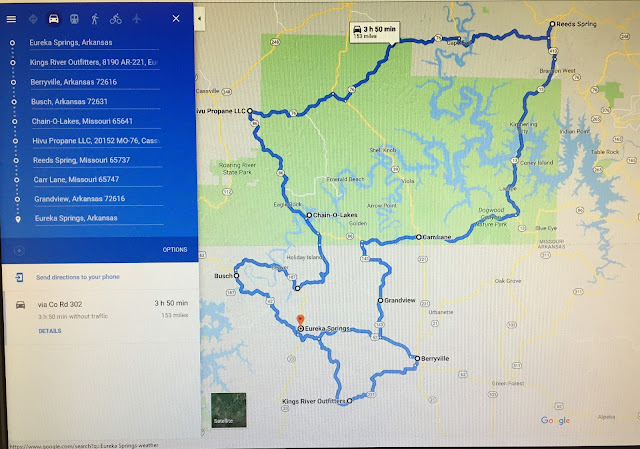