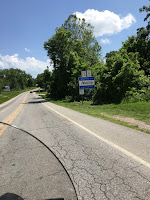 After tooling around the Midwest all day 12 hours (MN-IA-MO-OK-AR) I got so caught up in the scenery that I forgot to eat all day. By the time I arrived in NW Arkansas, to Eureka Springs, I was certain I was about to die of starvation... . I did manage to remember to drink water as I have a cup holder on the bike.. < side note:  maybe I need to install a FOOD holder on it too as a friendly reminder to eat>  I met my friend at the local TACO place. I don’t even know the name of it – I just know that the restaurant is literally built into the rock cliff on the side of the main drag. Its ambiance is awesome – from the water flowing out of the rock on the backside, to the bar rail seating facing the main drag where motorcycles constantly purred up and down the streets, the Cathouse bar across the street which always has a good show of people, bikes, and shenanigans, and the main drag lively with pipes echoing off the old buildings are rock cliffs. Some people think of motorcycles as noise nuisances....I think of them as instruments that bring musical joy. Anyways - the place is awesome from the location to the sights to the FOOD. Food is good. 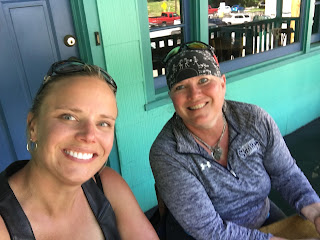 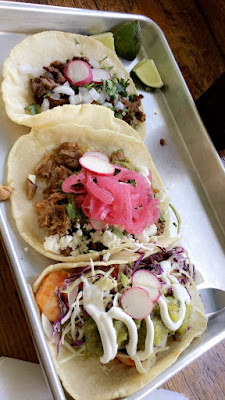 After stuffing our faces, we slowly threw a leg over the bike one more time to make our way to Green Tree RV Lodge where we would be landing our gear and our bodies for the weekend. When I go on bike trips, I sometimes stay in hotels, sometimes camp. This weekend I was feeling extra broke or eager, whichever way you want to look at it and camping was the plan. It's cheap and it is a good reason for me to USE the camp gear I own!! There's a shortage of campgrounds IN E.S... three to be exact. And of course, me, being non-committal as usual, went to book somewhere to stay for a HOLIDAY weekend a mere 3 days prior. And lucked out at finding ONE camp site left in the whole town. This does not help me become a better planner - if things always work out, that just means I really don't have to commit in the first place!! After checking into our campground 1.8 miles east of the main drag in ES, we set up our camp. Side note: There have been a couple of times in which we SHARED my little two man tent as she didn't have her own tent that would fit on the bike.. I still don’t know exactly how we did it, because just setting it up and putting my cot into it seems to take over most of the real estate available, leaving little in the way for my gear. Let alone another human AND more gear.  (This is said tent...but not current photo nor location... I apparently didn't think to take a photo of our campground all set up!!) 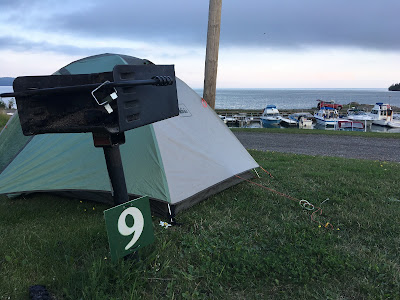 Our campground was a great little spot just off the beaten path – complete with a shower/bath house, a swimming pool, and an ‘on your honor’ camp shop, filled with anything we would need to be content in our camp for the weekend. 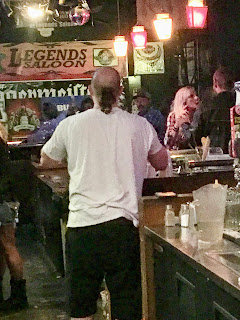 After all the riding, the sunshine, and the belly full of food, it was time to park the bikes for the night and hit the ground with our feet.. off to  Legends Bar to check out the local scene. It is one of our favorites – most nights they have either live music or karaoke amidst the haze of locals and bikers gathering to talk up the days ride. The bartenders are long term folks that I have gotten to know and love over the years. One could say I am 'pert near a regular' - ie: I walk in, see the bartender and ask if I can pull his hair for a free drink or if that was a one time gig. Yes, I once did just that. Only that time, the next day, the guy was gone and we were told he quit - no show, no call, just quit. I was hoping I wasn't any part of the cause of it.. turns out I was NOT... as he is BACK!  But the 'pull the pony tail' gig was no longer a valid offer.... Dang expiration dates.. lol.   It’s a great place to have a drink, people watch, and meet new riding friends.

I managed to run inside for who knows what, but when I returned to my perch on the rail... my seat was occupied by a stranger. From Iowa. Of all the people we can meet, of course we meet people from one state away from MN! 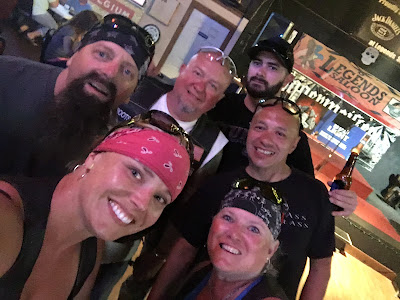 Fully expecting them to be in awe of the fact that we both RODE down to AR, we were utterly surprised to hear that they had also RODE to AR. Sounds like a stupid conversation topic, but it is a common one in the biker community. Not that there is anything wrong with trailering, I will forever tease those who trailer - out of good fun though. I totally get the benefits of doing so, I just CAN'T do it. Partly because I have a Corolla... and partly because I would never go that far in a car.. I know, its weird. I am ok with it tho!

After bs’ing a while, the guys kindly offered us to ride with them the next day. I don’t mean to sound like a prude… but I simply enjoy riding solo in and around ES. Why? Because I know the roads really well which means I know that the posted speed limits are just a bunch of hooey in the reality of the ride. I never really know how to put that nicely though… and I don’t want to sound like a B… so I simply said “I cant do that, but you are welcome to try to ride with us”. Again, no matter how I word that, it doesn’t sound nice. Luckily, the guys had a sense of humor and inquired as to what I meant by that… so I explained that we ride the corners hard and play the passing game often because the corners are calling our name and slow isn’t part of our nature. They took this as a friendly challenge and said they would like to ‘try to keep up’ with us the next day… which would later became a running joke over the next couple of days. That and "Harley vs Victory" riders.... Us girls ride Victories... The Boys rode Harleys. Its a rival between brands kind of like Chevy and Ford only more hard core... So when the HD guy wanted to try on my Victory Vest... well... 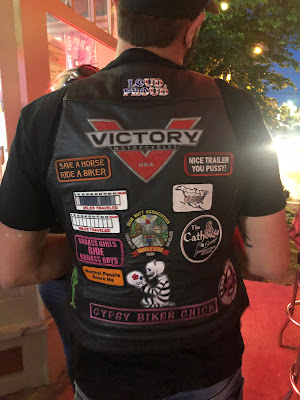