- June 25, 2019
Day 3 - (5/25/19) - After riding all day yesterday and playing in the sunshine it was back to camp to park the bikes for the night, relax, shower, and hit the nightlife in town. The second we pulled into camp, the locals (who sound like they stay there annually as many seem to know each other quite well) walked over to 'check in'. Where did we ride? What did we see? How are the bikes running? They were genuinely looking out for us all weekend. 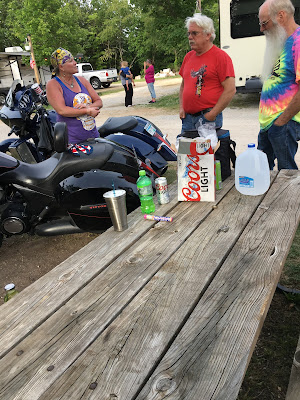 It is always entertaining to be a girl who rides motorcycle in general. Add in 2 girls on bikes who are camping and suddenly we become almost infamous in a short period of time, or so it seems. It was great that the folks in the campground look out for one another and quickly took us under their wing. They also fed us. REALLY well. They offered up dinner as they were bbq'ing and said there was a ton of food. We accepted their offer and walked to the end of the campground where there was 10-15 people sitting around bs'ing and laughing up a storm, amongst 4 long tables of food with 2 huge gas grills in the background. 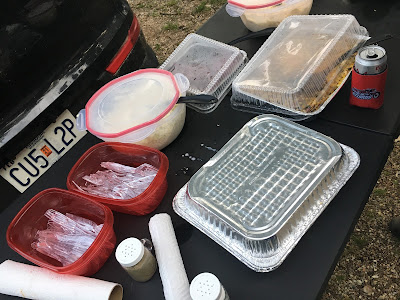 When they offered up food, I was expecting something simple like burgers or brats (that is what I make when camping!) but we were quickly in awe over their spread of offerings - everything from bacon wrapped peppers to steak to 4-5 salad options to dessert. It was a FEAST! We grabbed plates, dished up and parked at the picnic table where we learned the locals do come here annually and they have huge gatherings for meals several nights a week for anyone in camp to join in. The conversations ranged from farming to camping to biking to guns to moonshine. These folks clearly know how to have a good time! It was awesome that they immediatel y welcomed us in and made us feel right at home. After eating we got ready to hit the town. That sounds far more exciting than it might actually be, but for someone who prefers moderately large towns, I sure do have a place in my heart for little Eureka Springs. On the 10ish hour ride down, I am always amazed at everything that changes each time I come through. Until ES.. NOTHING changes in ES. Not the roads, the hotels, the restaurants, or the people. And maybe that is what makes it so charming. There are a handful of bars offering nightlight in ES. There are distinctly biker-type bars and then more coffeehouse- live music type establishments. Both are super fun! Being that we were staying more on the edge of town, we had a mile-ish walk to the nearest bar.. The Rowdy Beaver. We grabbed a couple of roadies and made our way there... carefully choosing our path as the way there is on the main road and there is zero shoulder to walk on, we were walking through the ditches and weeds. (We) may be older in age, but in spirit, I'd say I am mid 20's at best. We passed a BBQ joint that had a couple of pigs in the weeds out front and took a moment to mess around for some pictures. Cant pass up a dorky picture opportunity!! 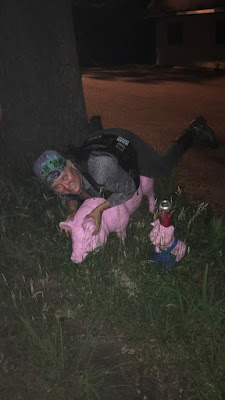 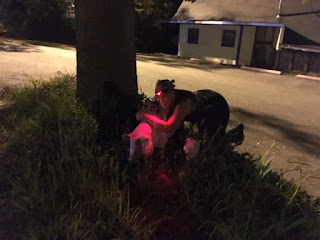 Then we kept on walking...at one point we thought we had found a shortcut through a dark parking lot in the back of a building... and then we saw a deer so we assumed there was a trail to follow... but upon closer inspection, it turns out that the deer has 4 wheel drive because there was zero chance we would be able to navigate that terrain and come out on the other side intact. So we weaved back to the main drag and kept on walking. We came over a small hill and could finally see the sign for the Rowdy Beaver Bar. Just at that moment, we hear a vehicle coming to a pretty solid halt just behind us.. before we had a chance to turn around, we hear "What the H are you girls doing? Get in here!" It was the gal from the campground - who was clearly appalled that we would WALK to the bar vs ask anyone there for a ride. Its only like a mile and we had been sitting in the saddle all day, so the walk was welcomed. But she was very adamant and quickly exited the drivers seat to clear the passenger and back seat for us to sit.. for a solid 5 blocks further to the bar. She made it very clear that she didn't want to see us walking again and that she would give us a ride anywhere we needed we just had to ask. Southern hospitality is amazing. We offered many thanks and hopped out of the truck to hang in the parking lot to finish our roadies. Because we are classy like that lol! 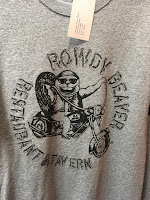 Not more than 3 seconds later, a bar tender from another establishment in town recognized us and started bsing on how she went from (I think she said) CA to Eureka Springs AR and how much she loves it here.  We made our way in, grabbed some popcorn, a drink and listened to the live blues music. The place was relatively quiet but that was just fine by us!