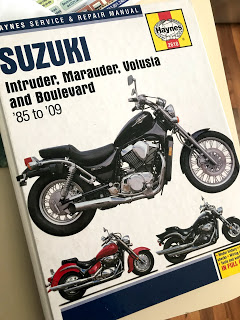 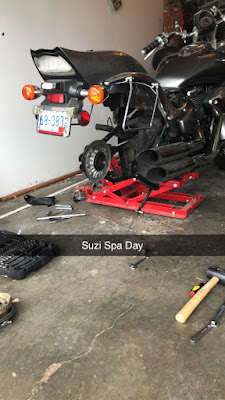 In preparation for a mini trip to Daytona, I had to get my very fist bike ready "Suzi" (Suzuki Boulevard M50 - 800 cc) because my Victory has too big of a butt to fit into a trailer with 3 other bikes.  And I hate the T word, but MN weather doesn't allow for riding this time of year, at least not consistently. So, having only ridden Suzi locally in the past few years, I figured I better do some maintenance on her if she was going to keep up with the big dog bikes. First things first. I changed her oil and discovered my brand new torque wrench was busted right out of the box. No biggie, I can work around that. Next up: Brakes. Not a HUGE deal while riding locally - I just downshift a lot and sometimes drag my feet. Not safe, not recommended. I dug out the service manual for Suzi - while these manuals may seem too expensive for how little I hope to use it - they pay off 100% the first time it is needed! Especially for newer bikes, which offer maintenance instructions like "To change oil, see dealer." Nonsense.
I have had Victory's for 5 years now - and Suzi's mechanics are quite different. 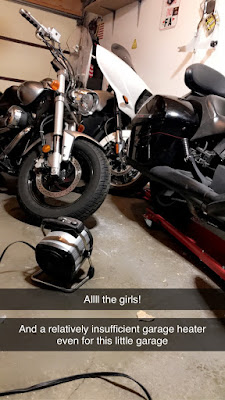 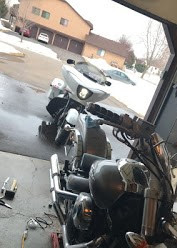 For example, Suzi has rear drum brakes. I didn't honestly know what those were but then I found myself jacking up my bike to remove the rear wheel. This task is terrifying at first, but after realizing there is no belt or chain to mess with, it helped me breathe a little easier! So I got the rear tire off. I took pictures along the way - I know myself well enough to know I would NEVER remember where things went when it was time to put her all back together. I got the tire off and was confused at where to look next. 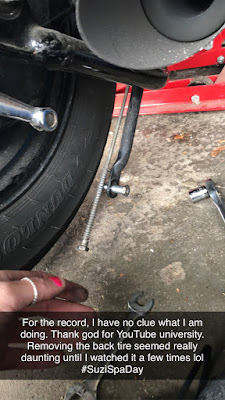 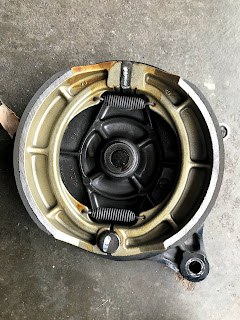 So I googled and YouTubed drum brakes in an effort to understand what I was looking at. Pads looked fine. Huh. Seeing no lines or tubes going into that area of the tire, I put it all back together and started on the front disc brake (single). The pads are good on that too. Dang. Bleeding brake lines is something I have never done, it scares me. Mostly because I don't have a clue how to bleed brakes and once again, I don't exactly understand the mechanics of how it all works. So back to Google and You Tube I went. After a couple of beers and a couple (ok 10+) videos, I kind of had the jist of it all. First, I needed to get a brake bleeding kit. Granted, I could throw one together on my own, but at this point I am struggling with patience to do the job as is. I managed to find the only brake bleed kit for motorcycles at the local auto part store. 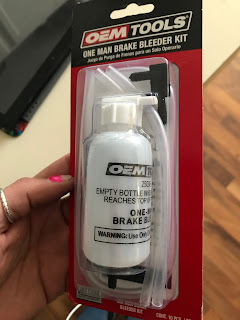 I called my dad to get his advice, and any tips or tricks I should know. Then I called the boy and asked him the same. Trust me, if anyone had been nearby to do the job for me, I would have let them AND paid them!  After a couple of attempts, I decided that I needed to wait to finish the job because I was beyond frustration level at that point. I have all the patience in the world for people - not the same for things. Especially things I don't know how to do. I dislike that feeling, as irrational as it is. 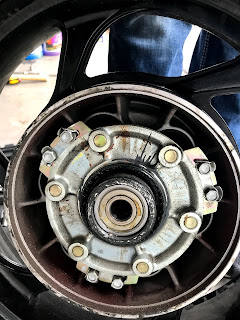 So I took a break and came back to it the next day. I was in a good mood, I had a high level of patience, and a higher level of determination. Then I opened the garage door to find Suzi had also given up and had fallen off the bike lift. 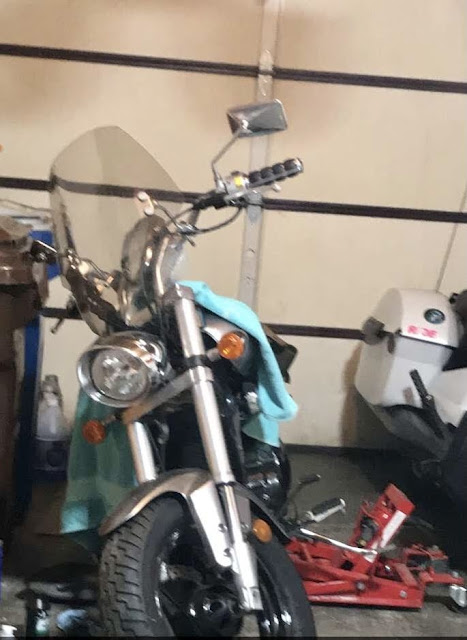 The only thing holding her from hitting the floor was her mirror. Determined, I took some deep breaths, stood her upright, had a chat with her, and started in.

The brake bleeding kit's tube was too small to fit my nozzle. I put it in front of the garage heater in attempts to stretch it to fit. Nope. I didn't have tubing laying around, none big enough anyways. So I started rummaging to see what I could use to make the hose fit....I tried a straw, a metal straw, a vent vacuum hose I had laying around, then, I saw a pen cap. The size was perfect for the hose, but a hair too big for the brake nozzle. So I put electrical tape INSIDE the pen cap to make it a snug fit. It was pretty ghetto, but hey, it worked!! 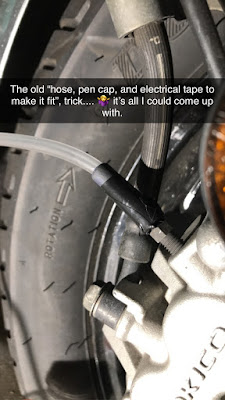 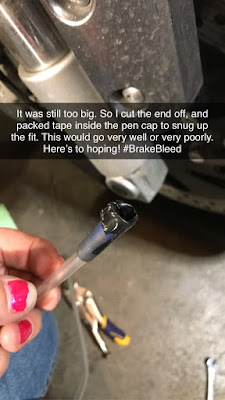 I went through the brake bleeding process over and over and over, getting weird satisfaction at seeing air bubbles come out of the line. I had SO much patience, that I didn't realize that I had been bleeding the stupid things for 90 straight minutes. It was at that moment that all patience was lost. No wonder my back hurt!!! I gave up. Defeated. 100%. Tears and all. I HATE not being able to do stuff on my own. I get that its irrational to think that I can figure out how to do everything, but I am hardwired to be independent, sometimes to a fault. Needless to say, one week later, she still has no brakes. The boy and a friend looked at her briefly and determined it to be an issue with the master brake cylinder.  I had my mind set on taking Suzi on the trip, but had to switch my brain to taking the Victory. The boy was going to put his bike in the truck so the three of us could fit in the trailer. 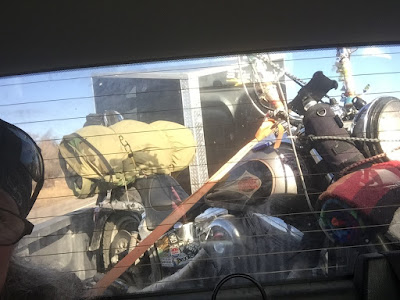 Lessons I learned - 1.) Always buy the service manual. You will thank yourself later. Or if nothing else, find it online and print it off.  2.) Only work on your bike when you have ALL THE PATIENCE needed to do so.  3.) You will not be able to fix everything even with improvising, and that is OK. 4.) When using a bike lift and keeping it there overnight, make sure to strap the bike down in case the lift decides it needs to take a break midway through the night. 5.) Always take pictures because no matter how much you think you will remember where everything goes, it's likely things will 'go wrong' and derail your previous train of thought!   The bonus is that I now know what a drum brake is and I know I can successfully take off and put on Suzi's rear tire! 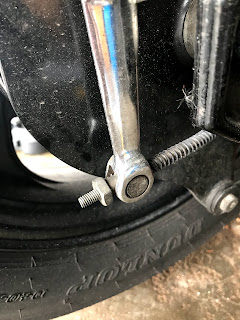 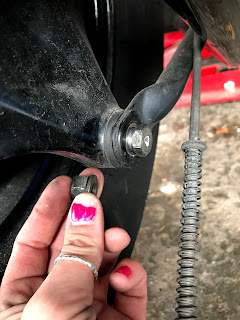 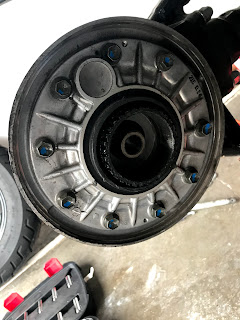 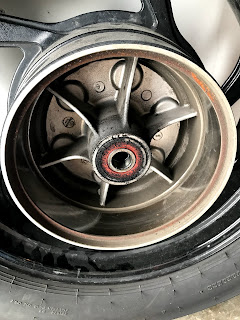 Regardless of all the issues that came up, at the end of the day- I am THANKFUL and GRATEFUL for a life on 2 wheels!!!!