The first time I tipped over on my motorcycle...

- April 14, 2020
Remember when you first started learning how to ride a bike? It’s a struggle to keep your balance and if you start to tip over your first instinct is to jump off the bike, hands first, planting your wrists against the ground with force, while your skin is soaking up the gravel, one tiny pebble at a time... and then you run crying the whole way home? Well, when you’re on a motorcycle do NOT do that. Nothing will go well if you try to jump off a 700-pound metal beast with flammable liquids between your legs and think that you’re going to be able superman your body farther than your bike will land. You can’t fly. Your bike can. You won’t win. The best thing to do is opposite of what your instinct might be – when you start to tip over, think of the bus lady yelling the rules at you on the first day of school. “Keep your hands and legs IN the bus (aka on the handlebars and foot pegs) while in motion”. And motion includes that of tipping over. At least on my Suzuki and my Victory, the bike is meant to protect the rider.  And it DOES if you remember the golden rule!  My first bike: 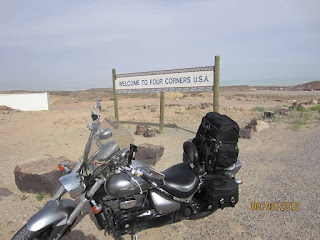 My first love, Suzi --- I still remember, very clearly, the first time I ever tipped over a motorcycle.  I had a brand-new Suzuki 800, roughly two weeks old. In that two weeks, I had managed to drive it all the way from the Twin Cities to where I lived at the time about 30 miles west. That might not sound like far, or like it was a tough go, but it was all metro riding. So, TONS of stop lights and accelerating and traffic. I killed the bike at every stoplight because I didn’t quite understand the workings of a clutch. That was embarrassing at the time, but hey I made it home A-Okay and not in the form of roadkill. My uncle was gracious enough to help me learn how to ride and he rode with me the first few times just to make sure I had a security buffer between me and the traffic behind me going 60 miles an hour. So, when I killed the clutch and needed to restart my bike in a panic, I wouldn’t be run over while sitting still, sweating and violently pushing the start button only to realize I didn’t have the clutch pulled in. One of the few rides after he left me on my own, I had a great ride, didn’t kill the bike once! But then, as I get home and I pull into my driveway... There I went.  Toppled over sideways. In slow motion. I pulled into the driveway, which involved turning the wheel, going over a bump between pavement and the curb, and then gradual incline of a driveway… in second gear. Never go THAT slow in second gear. The bike started puttering and I panicked. And then slowly tipped over to the left. It was embarrassing but I was OK, and the bike was OK. My ego however was borderline intact as I quickly stood up looked at both directions to see if any neighbors saw me. Clear! Realizing that nobody had seen that disaster, I put my superman self underneath the bike, using my butt and back, in the way that I was told to pick up a bike and I, 1-2-3 PUSH it up (it worked!!) and then quickly flung it over with such force, it kept on going and fell over on the opposite side. The glimpse of a proud moment of getting the bike upright by myself, quickly faded into sheer horror.  So now not only had I had the success of tipping over my bike for the first time, I also got 2-for-1 bonus round of doing it again. I guess this is how you learn but it sure was not fun. The second time that I had tipped my bike over, within one minute of the previous time, I quickly learned to put down the kickstand. So, this time when I super-heroed the bike back upright, it was going to stay that way. I learned that day, that if you’re going to tip over a bike it’s best to tip over to the right side, so that when you pick it back up at least the kickstand has your back and will help you out. Provided you remember to put the kickstand down before up righting the bike. Lessons learned. Not always pretty but live and learn. The first tip over was fine - not a scratch or dent in the bike. The second, in the same minute, didn’t fare quite so well. I dented the mirror and scraped the handlebars. Now there was PROOF that I dropped the bike. Ugh. It was a huge blow to my ego- not only that I dropped my brand-new bike twice, but now there was evidence, and ‘horrible damage’ as I remember thinking at the time. It takes a LOT muscle work to get 700 pounds of steel up-righted by one person. And when in a sheer panic, I used every muscle and motion possible to get the bike upright before anyone saw, but in that hustle, I clearly didn’t use correct lifting procedure. It took me roughly 6 days before I could stand upright fully again. Lesson learned: Always downshift to 1st gear when turning slowly. And if I forget, at least hold in the clutch all the way. Also… ask for help. It hurts WAY less.