Goosenecks and Cliffhanging - so amazing!

- December 10, 2019
I live life on the edge. Figuratively and literally, most days. My mom and I recently had a discussion on where this fascination may have come from (DAD).. when I was a kid, we went on road trips every summer, usually heading west. One year, when I was roughly 11 years old, we went to Washington State to visit family. Family who, like me (now), live for adventure. They wanted to show us a cool trail - all I remember is that the trail came up to a STEEP ledge, barely wider than the length of my foot, and had a cable screwed into the rock so that we could hang on and not fall off the trail, down the steep cliff, never to be seen again. She remembers is more like this, "We went on this TINY narrow trail, with two kids who HATED each other. All I could picture is (my brother) pushing you off the edge with one swift movement." My rebuttal, as an adult, was of course, the fact that there was a safety device well drilled into the earth to keep us all alive and on the path. She still shakes her head to this day. And she blames that day as what started my edge-of-the-cliff wanderlust.

Not one to disappoint, as I was wandering through Utah, I came across a Goosenecks State Park brochure. It was meant to be!!  I must go there!! Stiffy and I hopped on the bikes for a day of riding adventure, only to take a detour to the Gooseneck State Park - where the roads were as winding as the river and the expansive views as amazing as the canyon below. The canyon that I just HAD to see for myself....

The pictures don't do it justice - the colors changed every time the sun peaked out or went behind a cloud. Below: One of the goosenecks of the river. 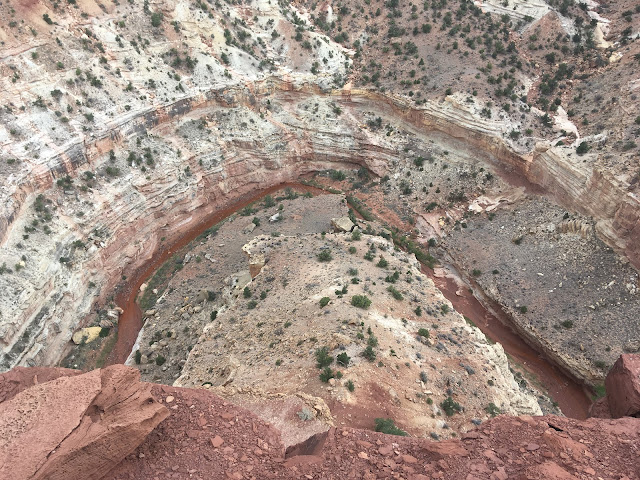 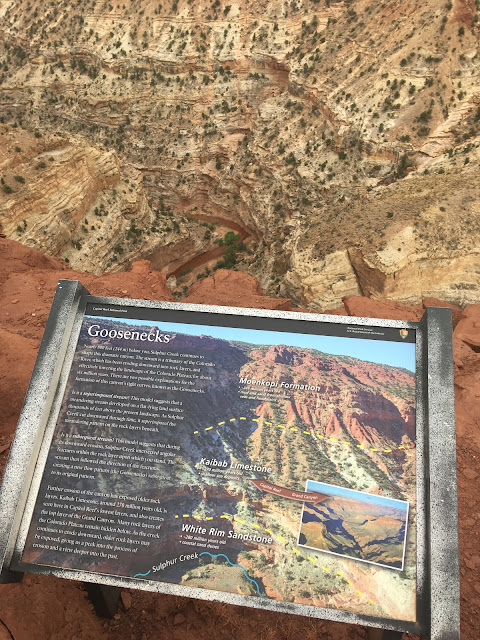 I cant figure out how to change the angle of a picture on here, but you get the idea. You're welcome mom (for stopping to acknowledge the sign... she's been trying to tell me this SAME THING for years!) 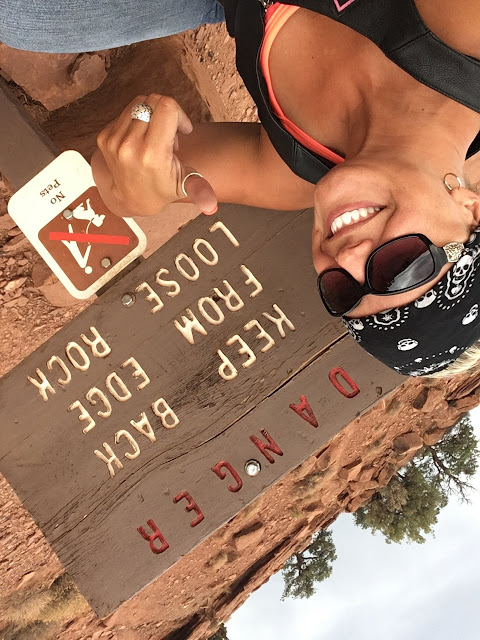 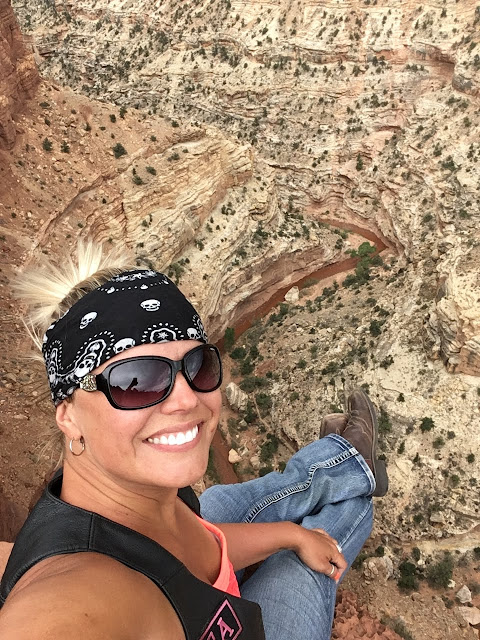 Dinosaur in the rock?? 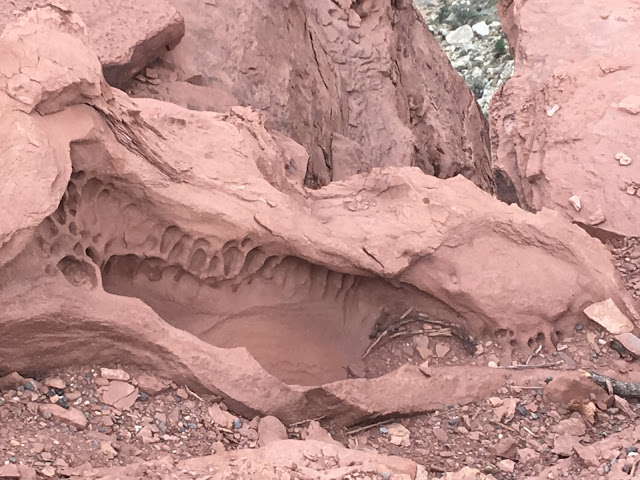 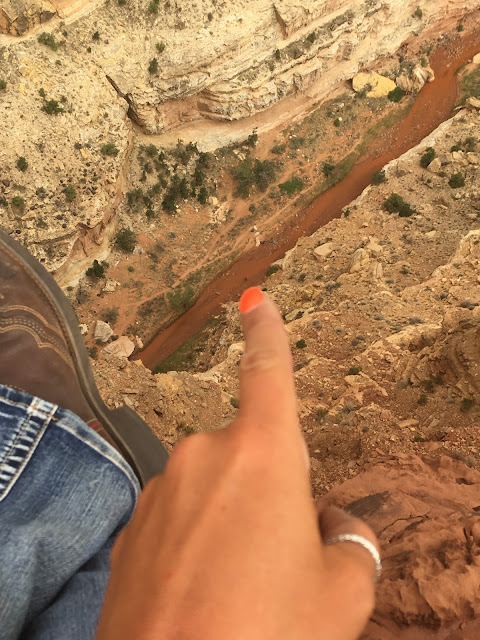 Stiffy totally missed out on the views from WAY up there! 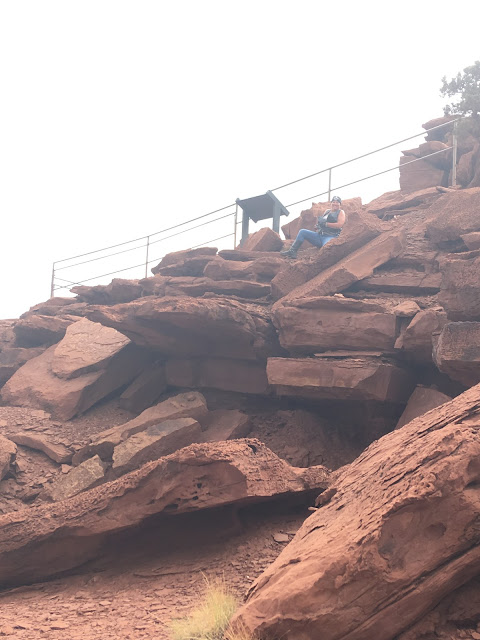 After some hiking, pictures, and a few minutes to soak it all in, we head out...I can sense her anxiety with me from here... Yet another gravel road to lead us out. 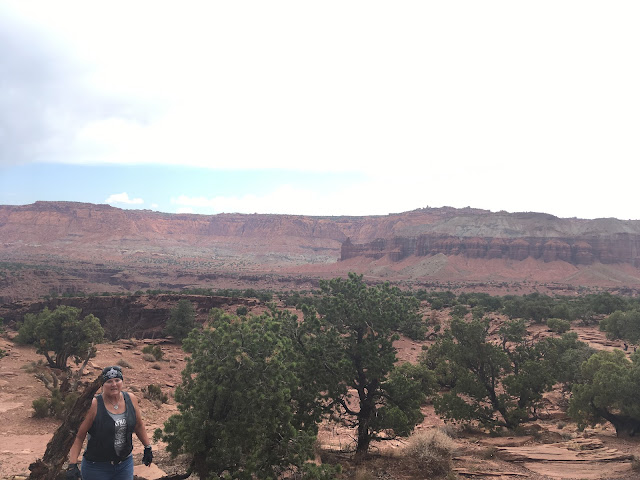 This is why trying to take pictures while riding... on gravel... switchbacks... is NOT the best idea
Those wild tracks? Those are courtesy of a failed attempt at said picture. Followed by a gymnast move (by the Victory, not me), a little acrobatics, and a quick time out to pick my bike back up and get it facing the right way again. #Oops 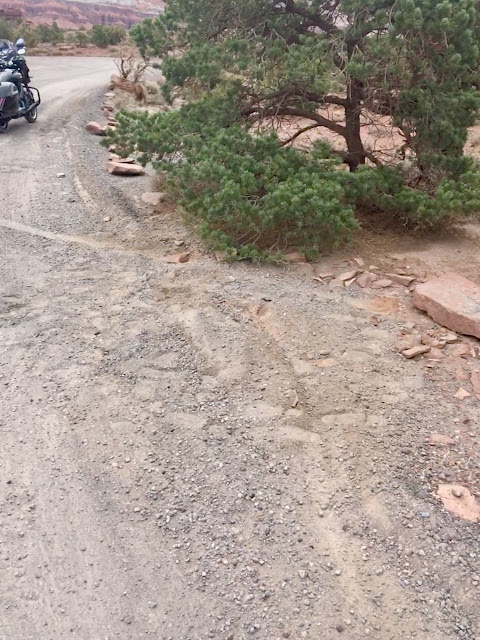 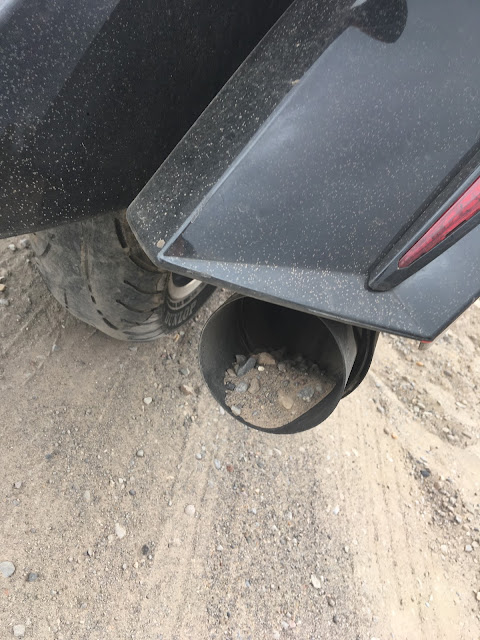 A quick fix to put things (the crash bar, rear brake pedal, and floor board for example) back where they belong and the bike is good as new! #Success   (See "Tip me over but don't pour me out" blog post for more of these types of oopsie situations...lol) 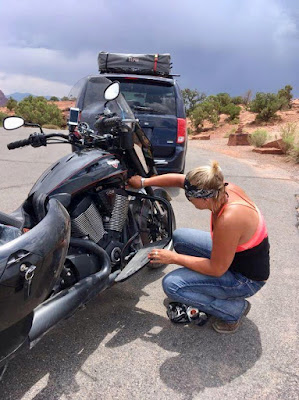 Gooseneck State Park Description - https://stateparks.utah.gov/parks/goosenecks/discover/
On the edge of a deep canyon above river is a gooseneck, this small park affords impressive views of one of the most striking examples of an entrenched river meander on the North American continent. The San Juan River twists and turns, flowing a distance of over six miles while advancing one and half miles west on its way to Lake Powell. Gaze at the results of 300 million years of geological activity, where the San Juan River winds and carves its way through the desert 1,000 feet below.At Goosenecks, the views extend for miles. Alhambra Rock is the dark volcanic intrusion that looms on the horizon, beyond Mexican Hat. The buttes and spires of Monument Valley lie to the southwest.