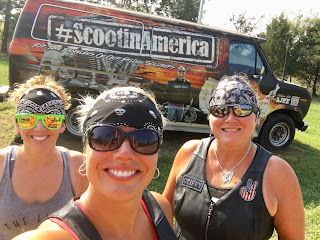 While in Arkansas the week prior, the bestie won a luxury dream vacation to Adam Sandoval's campground in OK - to be a part of a world record attempt.. the NEXT weekend (10/6/19). Not ones to bulk at a challenge, we went from Arkansas to Minnesota, to wash clothes, work a little, change the oil, and hit the road back south, to Texas. 9 days and 3,500 miles...and counting!  We knew we couldn’t be a part of the Bring It Home parade, where they were going to attempt to win the world record for the number of Harley's in one parade in Paris, Texas, we were sure excited for the crazy, unplanned  'epic-epic dream luxury RV vacation' -adventure, won by the Bestie just a few days prior while in Arkansas!

We came home a day early from Arkansas, Tuesday, to do some adulting, and quickly turn around and head out after work on Thursday evening. It was much cooler than just days before, with temps in the mid 40's as we blasted south, destination (at least) Iowa before stopping for the night.  Turns out blasting through Iowa in the dark is far better than riding that stretch in the daylight!  We were making good time, heated gear on high, and landed for the night just before midnight just past the Iowa/Missouri border. The next morning we got up and on the road early for arrival at the Kriver campground in Moyers, OK. Naturally, we hit rain for the last stretch, but all in all, it was a pretty easy ride from Minneapolis to Moyers, OK, considering all the saddle time we all have had in the last few weeks!! 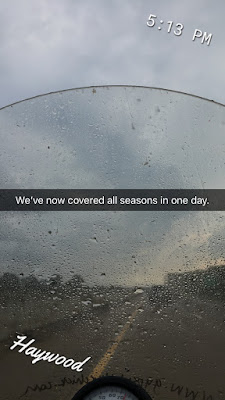 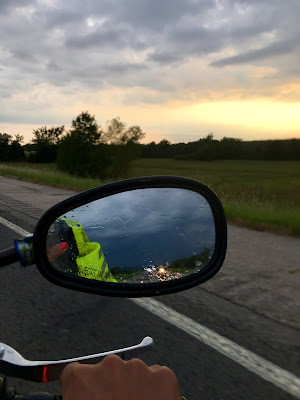 As we neared Moyers, we were all super excited to check out just what this 'epic-epic vacation getaway' had in store for us!! From the luxury RV, to the fully stocked bar, to the food credit, casino cash, and gas money - it was sure to be a blast!!! After all, it was titled a DREAM vacation with '$1,000.00 worth of fun'!!!!!   Whoop!! 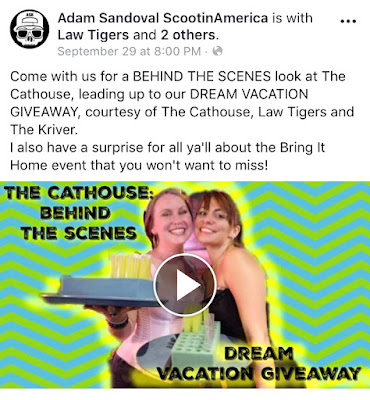 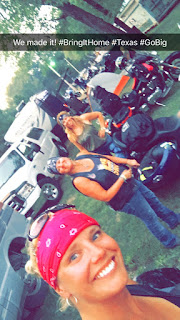 We arrived at the campground and it was a bit chaotic checking in and figuring out where we needed to be. We were led to our luxury RV - having just slept in tents the long weekend prior, anything that didn’t include setting up our own gear to sleep in was going to be epic! 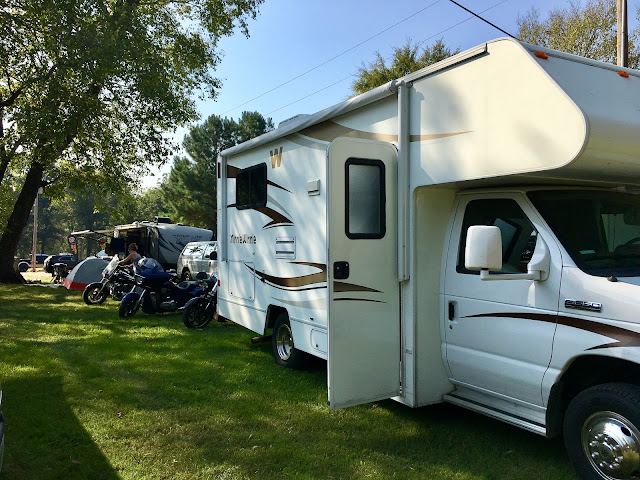 We walked into the Minne Winnie and picked out our sleeping spots for the weekend - bestie in the far back in the double/queen bed, Stiffy at the table conversion bed, and me above the driver seat area.   We checked out the bar area - there was alcohol, all right! 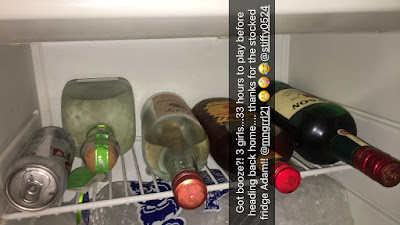 Good to go! We set out for some cups, went and bought some ice from the Kriver store, and settled in for a fun weekend. We walked around camp to meet the neighbors and others - it seemed like a cool atmosphere - well, until 10:30pm when the whole place turned into a ghost town. Apparently, it was early AM start time, we asked a couple of people when to be where but didn’t really get concrete answers. Assuming someone would tell us where to meet the crew to ride to Paris the next morning, we headed back to the camper to get some zzz's.    We quickly realized there was no bedding. At all. No pillows, no blankets, no sheets. Nothing. None of us packed sleeping gear given the idea that this was a complete dream vacation! Assuming it was a missed detail, we located someone to grab us bedding - which was 2 pillows, a comforter, and one sheet set. Good enough, we will make due. Still beats sleeping in our tents again! (Bestie ended up sleeping under her spare hoodie, her towel, and whatever else she could find; Stiffy used the blanket and sheet since she was sleeping on cracked vinyl that would have made a nightmare of her skin by morning; and I sufficed with using the felt privacy curtain that was meant for the windshield and a balled-up hoodie for a pillow. 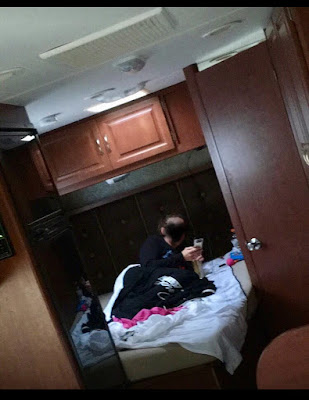 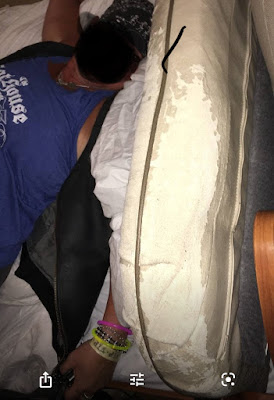 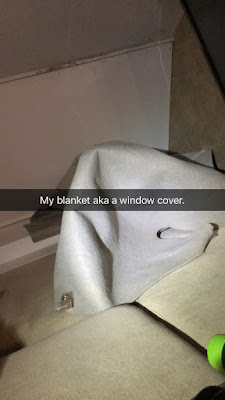 Saturday morning was the Bring It Home Parade - when we woke up after 9am, the campground appeared deserted - no bikes, no people. Clearly, we missed the parade details - o well, we got ready and headed out to Paris Texas, 76 miles south.  We found the HD dealer in Paris and parked the bikes, then got in line for the trolley/vans that would bring us to the airport, where the official Bring It Home parade was going to be held.  It was pretty amazing to see that many bikes and people in one place!!! For as far as the eye could see, there were bikes. And then bikes behind them. 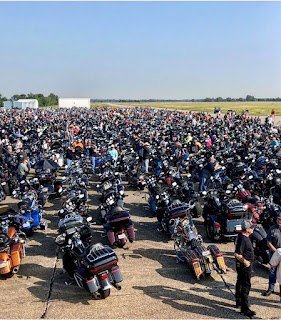 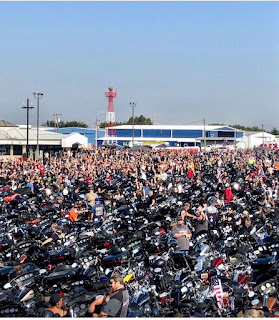 And an old school WWII fighter airplane that was the leader of the parade pack. While we couldn’t officially be IN the parade, it was quite the experience to BE there and witness it all take place! We took a moment to soak it all in, and represent Victory, of course!! 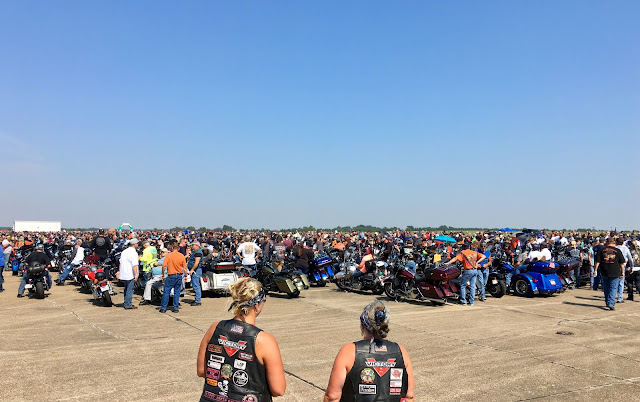 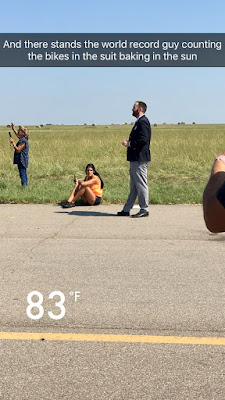 We hung out for a few hours - I can’t imagine the logistics of such an event!!! From having the Guinness World Record folks on site, to the official registration of bikes, to everything in between, it was HUGE! 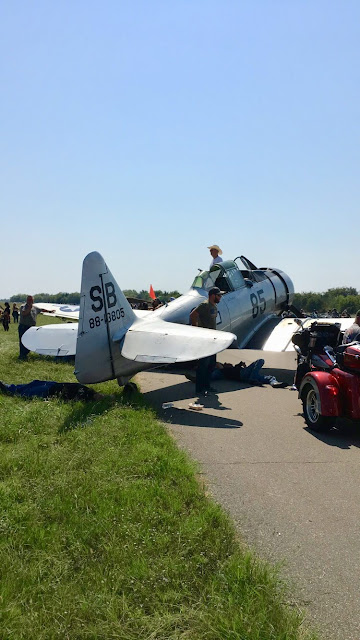 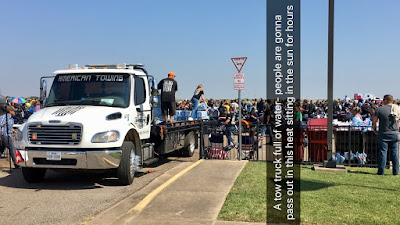 After watching the plane get going and start off the parade, and watching several hundred bikes roll past us, we decided to mosey back towards our bikes at the HD dealer and then check out Paris Texas! Some friends we met the night before were in the FAR back of the line of bikes, and after having gotten there at 8am, they were still waiting to go in the parade at 2:30pm. With the sun blazing down, not a cloud in the sky, and temps in the upper 80's - people had to have been SCORCHING!! As we were leaving, they were unloading a flatbed tow truck full of water to hand out to folks to avoid heat stroke.

We ended up hitching a ride back to the HD Dealer. After a few minutes chatting with the gal, turns out she was the OWNER of Paris HD. It was super cool to hear her story of how her family started as a Honda dealer and grew into an HD dealer. She was a great lady!!! We arrived back at our bikes, grabbed a cold water, and set out to find the Eiffel tower of Paris, Texas!!! 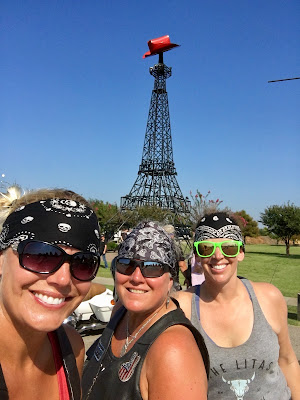 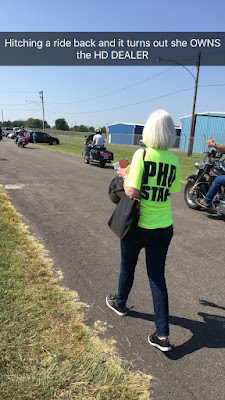 Back at the Kriver Campground, we soaked in some AC and talked about the events of the last week. From Arkansas to Texas in one week... seems surreal! I would hope that they brought the World Record home based on how many bikes we saw it would be crazy if they didn’t. (They did!! CONGRATS!!!!!!!!!) Back at camp, we walked around in search of the folks with the food gc's and the folks with the casino cash (since we had to leave in the morning) - but, as it turned out, we never found the people nor the food/casino/gas cash.  Bestie did speak with the Cathouse folks who gave her cash and said they would work it out with the other sponsors. That was kind of them! We chatted with a lot of cool people, hung out by the karaoke area, and meandered some more before hitting the hay, WAY later than we should of given the fact we had a 16 hour ride home the following morning!!! Yep, we left Moyers, OK at the crack of dawn, and arrived in Minneapolis that evening - just as it was getting dark out. And of course, 7 hours of that trip was in POURING rain... In a matter of 9 days, we had ridden over 3,500 miles, traveled through 7 states (several more than once), met some amazingly fun folks, and made so many incredible memories!!

Would I do it again? Would I go from Arkansas to Minneapolis then back to Paris Texas in a week, knowing what I know now about the complete dream vacation? NO. Had the bestie not won the dream vacation with alcohol, food credits, casino cash, and gas money, there is no way we would have even considered riding down to Paris, Texas, for an event that we couldn’t be a part of. But, since she won the dream vacation, we wanted to go check it all out and not be the people who won something then didn’t show for it. While sleeping with a felt window shade was fun, that along with the missing pieces of the dream vacation were not exactly worth the distance traveled. But, it was an adventure for the books!!! 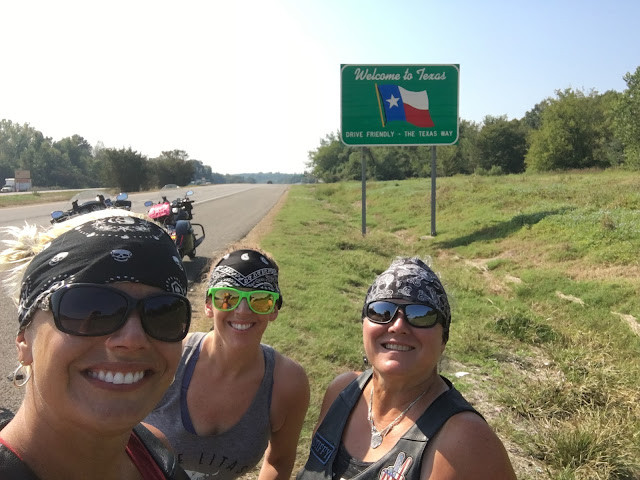 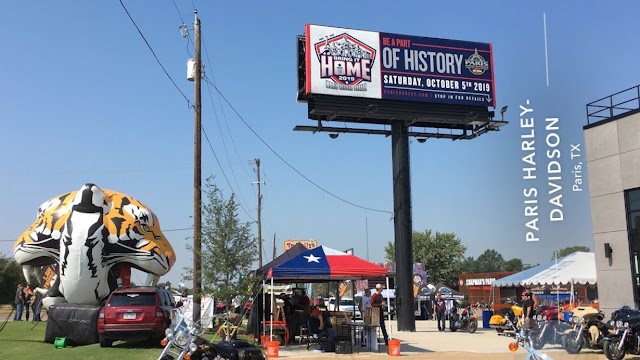