Minnesota to Niagara Falls, NY and back - in 72 hours!


I recently had a lot going on in my family life and was mentally burnt out and needed to get away to clear my head. So, at the VERY last minute (like 28 hours prior...), I decided to pack the bike and see where I wound up. I have a running list of stuff I want to see– and after some google research, I learned that Niagara Falls, one of my top “must see” places on the list, was ‘only’ 15.5 hours away, and not even 1,000 miles. After a quick check of weather, I decided I would head east to Niagara Falls.

I made good time and was determined to make it from Minneapolis to Niagara Falls, NY in a day. The trip was a breeze – aside from the tsunami over the entire state of Wisconsin. I posted a few pics on social media along my way and then received some texts. One from Stiffy, she wanted to ride this weekend and was wondering where I was headed. I told her Niagara Falls. She said, “NEW YORK”? Yes. “I will try to catch you after work”.  (She is crazy!) 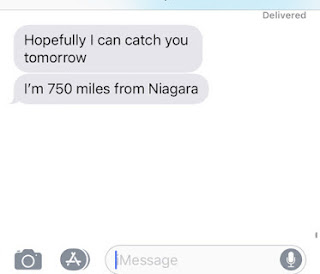 Another message was from Miller, a friend from North Dakota, who was also on his way to New York on his bike, to Brooklyn, for the Indian Larry Block Party. I was in Cleveland at this point – he was in western New York- so we found a place on the map mid-way, in Dubois, Pennsylvania, to meet up for the night. I was the same distance from Niagara Falls as I was Dubois, so why not? *side note: I didn’t check to see how far this was from Niagara Falls. We met up at a local bar for some food, drinks, and sharing of crazy biker stories. 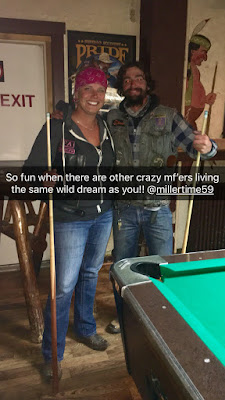 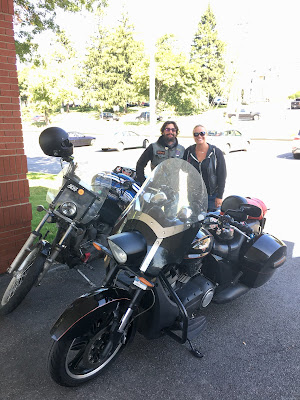 For those of you who think I am crazy… he wins. He packs a tarp and a blanket and sleeps wherever he is when he gets tired – on the way out to NY from ND, he slept in a grassy ditch, wrapped in his blanket and tarp and then next night he slept under a “perfect” tree. He asked if I knew where any state forest land was near the town we were meeting in, to sleep. While I packed a tent just in case I didn’t find anywhere else to sleep, I surely wasn’t wanting to use it after arriving to PA in the wee hours of night. He didn’t say so, but I am pretty sure he appreciated the fact that I booked a hotel room and offered it up to him. Lol. 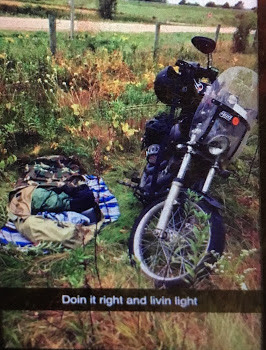 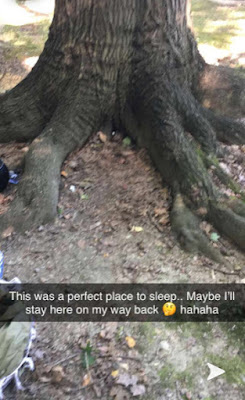 After losing a few games of pool, it was off to sleep. I had a busy weekend ahead with not a lot of time to cram it all in! I headed out, taking some scenic routes NW out of Pennsylvania towards Niagara Falls, as well as a quick stop at the local Elk lookout. I mentioned that I didn’t map out how far NF was. And I should have because I didn’t get to NF until dinner time- aka it was starting to get dark.
My bikes first time in New York! 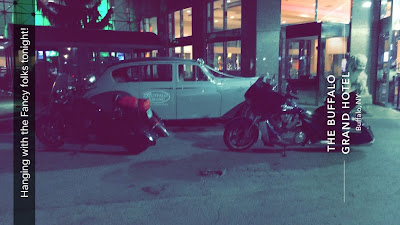 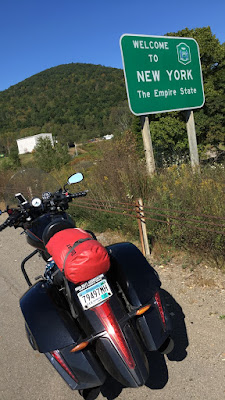 I pulled into a restaurant in Buffalo, NY, where sure enough, there sat Stiffy! We ate, found a fancy-schmancy place to sleep for the night on Priceline, unloaded the bikes, and headed out on the town. Buffalo New York has some cool sights – someday maybe I will return when I have more than 12 hours to spare.

The next morning it was time to see Niagara Falls. I wanted to see the Canadian side too – I had heard and read that the Canadian side was prettier than the US side because you can see the entire falls from there. I told Stiffy this, and she informed me she didn’t have a current passport. So, she veered off to the US side and I took off for Canada. Customs was a breeze – where are you from? Where are you going? How long are you staying? Any drugs or weapons?  And off I went. 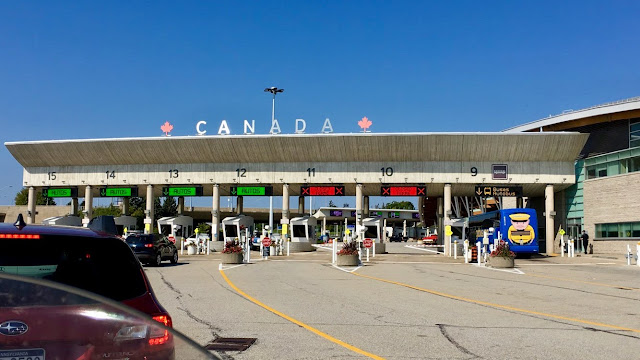 The ride from the border to the falls was euphoric. Here I was, cruising along in the sunshine, in Canada, on a whim and with roughly 20 minutes of advanced planning. When getting on the roadway to the Falls, it is overwhelming. From the amount of people, to the traffic, to the incredible mini-glimpses of the falls en route to parking. Parking was a fiasco – and $20. After creeping around and around the parking lot for 20 minutes, wearing a black leather vest, sitting on a black bike, and baking in the sunshine, I found a spot to park and started walking. 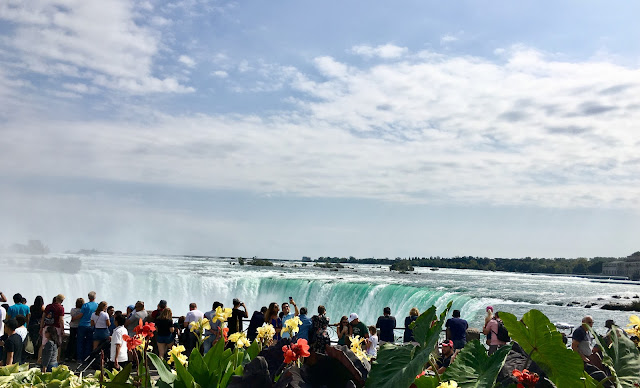 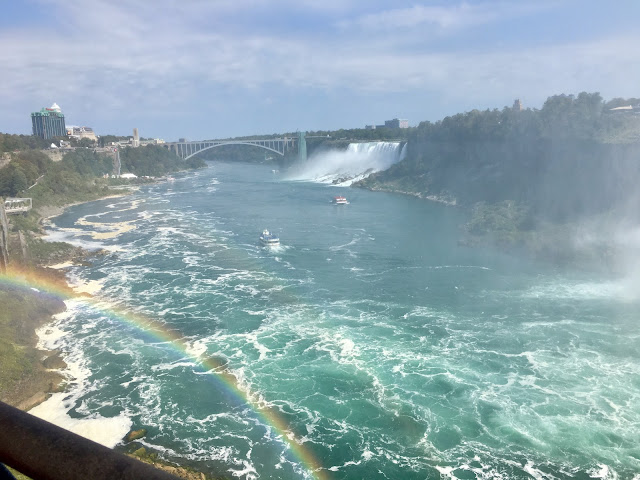 I foolishly thought that I could see everything I wanted to see on the Canadian side in an hour. I could have spent 2 days exploring – all the walking trails, the numerous little waterfalls leading to Niagara Falls itself, all the walking tours under the falls…. I need to return. The pictures don’t do it justice – it was absolutely amazing to see!!

From there I headed back to the United States side – customs again was a breeze. 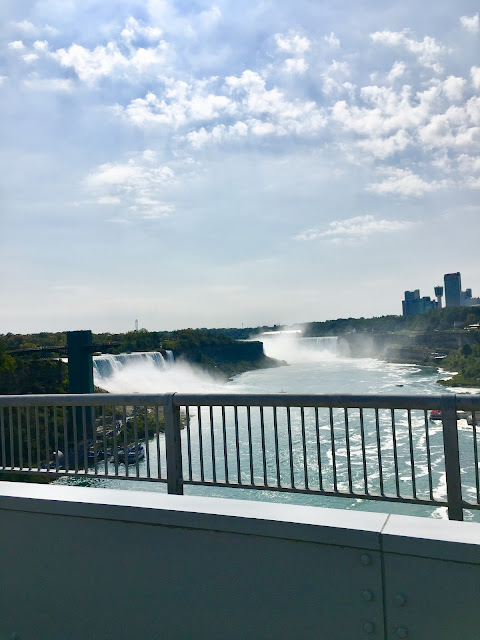 There was a slight miscommunication between Stiffy and I – I failed to ask where she parked, again underestimating the SIZE of the falls. I picked a lot at the end. Which happened to be the FARTHEST lot away from where she was. I grabbed the camera and headed her direction – stopping to soak in the incredible views along the way, while wiping sweat with my 2-day old tank top. I don’t know what was more disgusting – my body or my shirt. 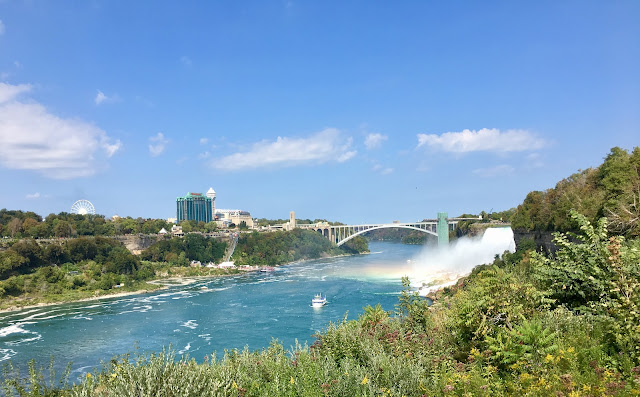 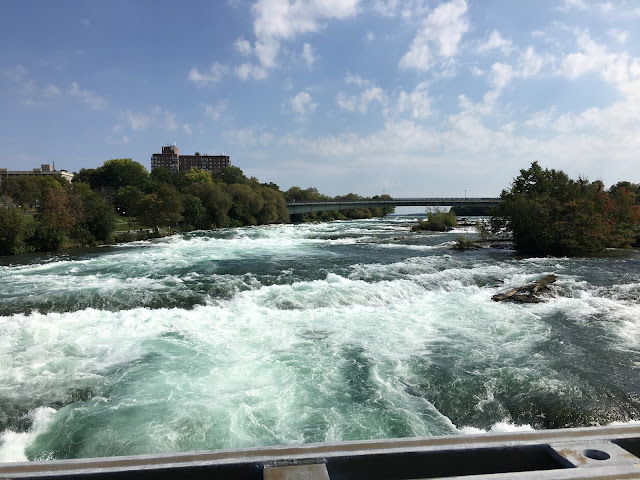 While she was waiting for my arrival (after a ‘quick spin to Canadian side’), she had gotten tickets for Maid of the Mist ride. We got our fancy, stylish ponchos and headed to the boat. I am pretty sure we were the LAST ones to put the ponchos on. Something about sticking my filthy, sweaty limbs into an overpriced plastic bag while standing in the line of 200 people in the sunshine just sounded gross. And it was. The Maid of the Mist runs every 20-30 minutes. No reservations needed, just show up and wait. Tickets were $20. Totally worth it. The boat takes you RIGHT UP to the falls. 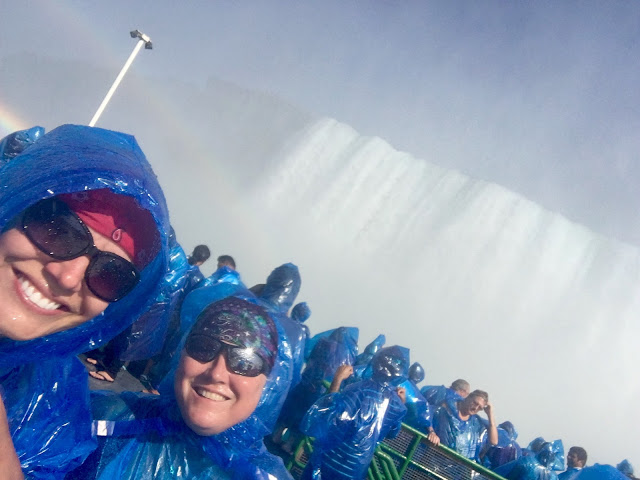 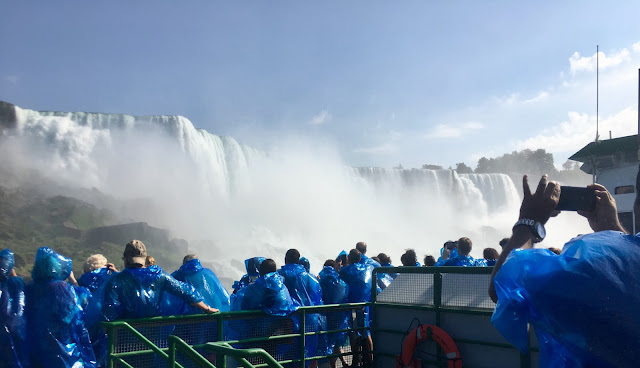 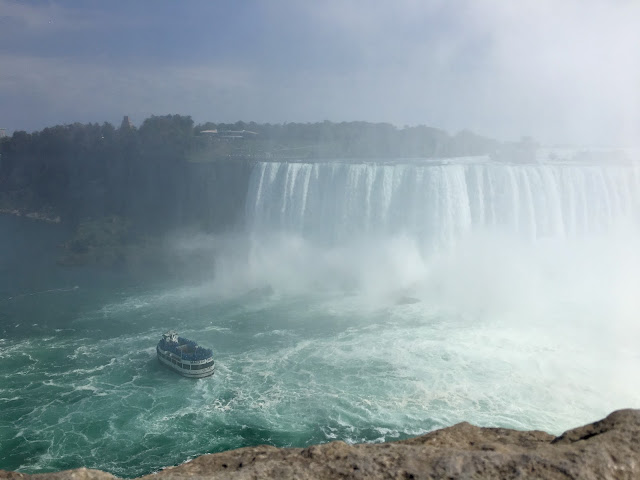 It is crazy to HEAR just how hard the water is falling. Equivalent to 70-Olympic size swimming pools of water flows over the falls every minute, falling 167’ at 25mph. That is a LOT of math to soak in – and its as epic as it sounds!! 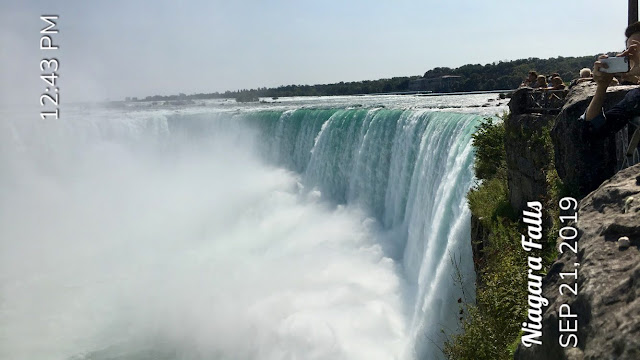 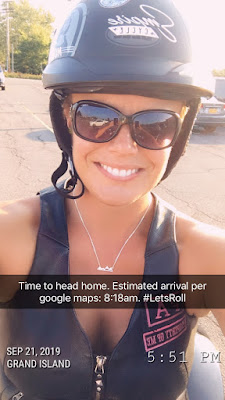 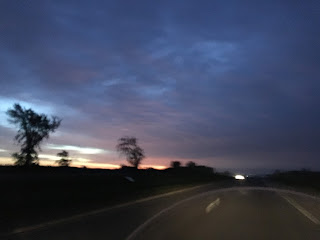 I planned on spending 4-5 hours total at Niagara Falls, both the Canadian side and the USA side. I grossly underestimated how much time it takes just to ‘zoom through’ things. But that was OK – it was 100000% worth the trip and time! Nearing sunset and having spent a total of less than 24 hours in New York, it was time to head back to MN. We planned to ride until we got tired, stop and sleep a couple hours, then back at it.

We cruised through New York, Pennsylvania, and Ohio with little traffic, fantastic weather, and no wildlife. At 2:30am, we made it to the Ohio/Indiana border and were going strong, both of us feeling good and still wide awake.

Next stop, unexpectedly, on the side of the freeway just shy of the Indiana border, due to a flat tire…. That post is coming next!!!


More pictures from the 72 hour jaunt from MN to NY: 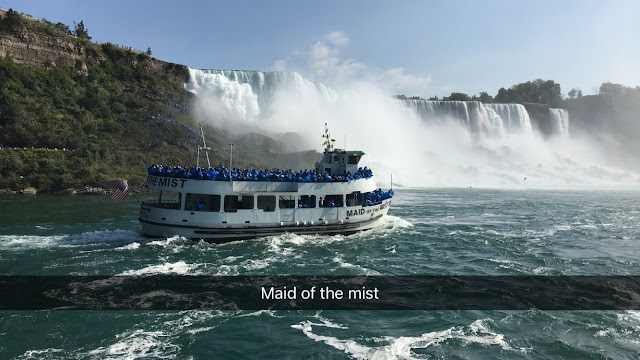 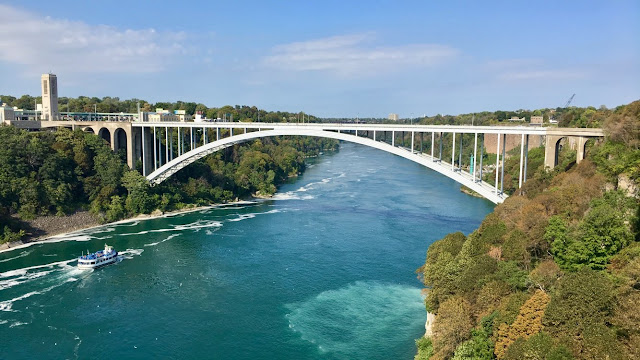 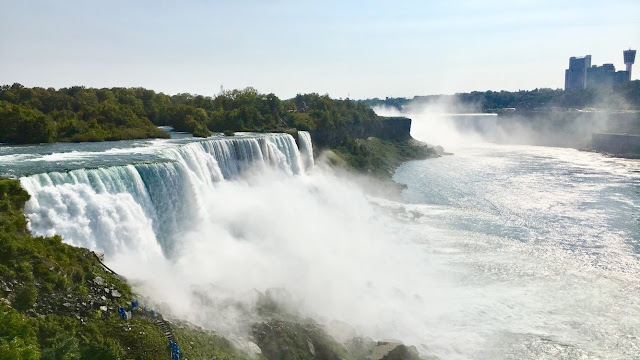 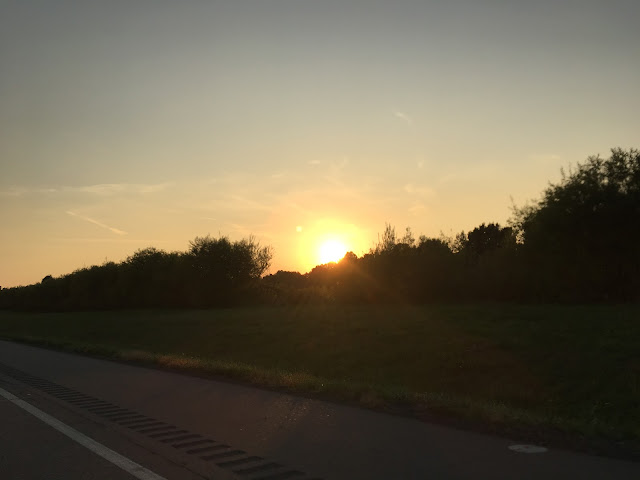 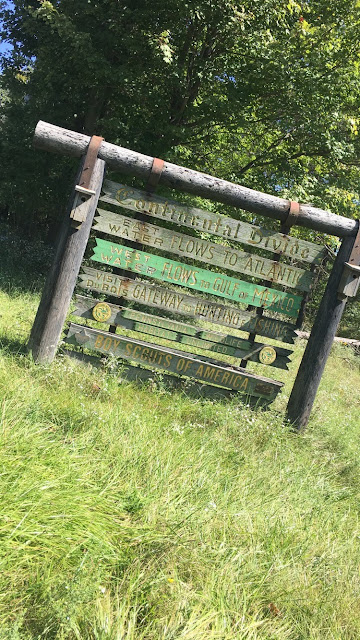 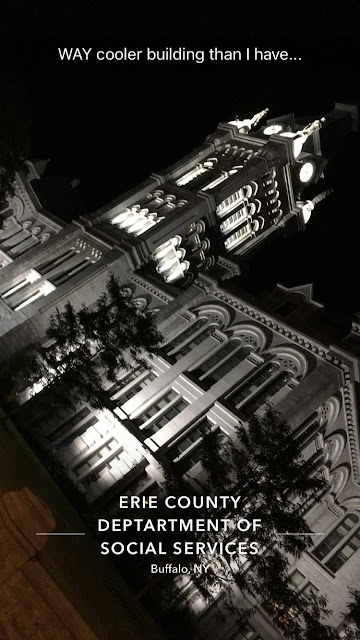 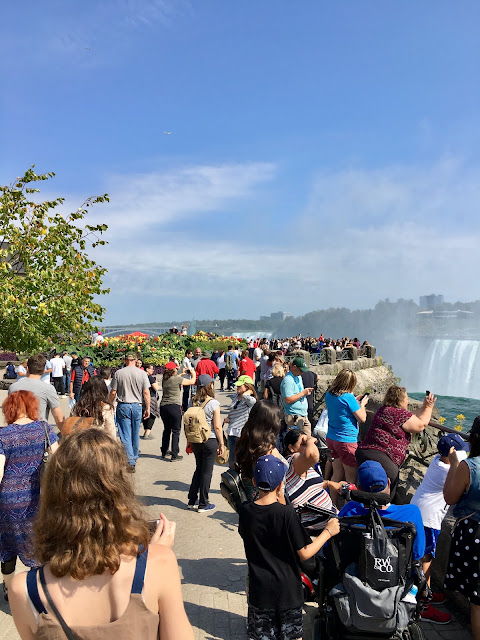 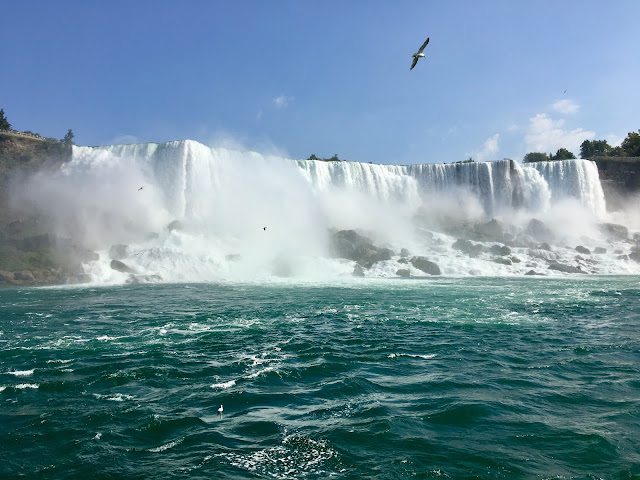