- November 14, 2017
Ah, the joys of living in MN. A few days in the 50's, a few days in the 20's, a little snow, a few days in the 30's... repeat. Until doom comes for real. Today was a surprise "nice" day (for here). 44 and some sun- neither of which we have eeen for weeks here in the icebox state. After having settled on the bike being done for the year, I had to unburrow her from the nook in the garage.. which was totally worth it! The. I was curious to see if she started as I hadn't hooked up the tender yet. One try and she came to life, a little sputtery but ready to roll. Air in the tire was good. Oil is good. iPod is charged. Game on! Just had to carefully get her out of the garage, over the ice patch, through the little bit of snow, and onward! 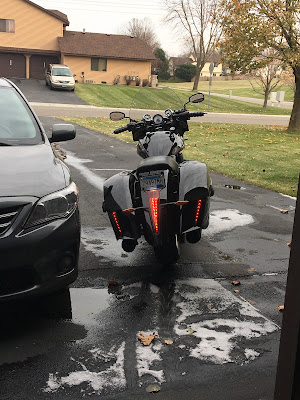 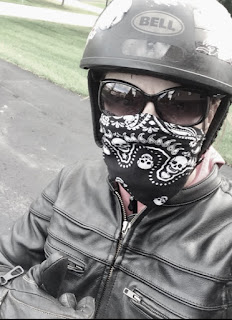 Took full advantage of it and managed to ride 140 miles ~ not sure how that added up so quick as I just pursed around my area. Oddly, I only saw one other bike the whole time (plus my die hard friend Shelly was ripping around somewhere nearby but we never did meet up. Daylight is short w d sweet this time of year so instead of waiting for one another trying to play catch we instead would have played the wave game if we crossed paths. I wore my heated vest and gloves but didn't turn either on until the last half of the ride, as the sun was setting quickly, the temps were dropping quickly. There was some sand and farming junk on the roads, which I was prepared for and on the lookout for. Also figured no one would be looking for a motorcycle today, or the rest of the year for that matter. So I just took the corners a little easier than normal and the pipes did a great job purring loudly because of the co,d weather.  Cruising around, taking in the fresh crisp air, jammin to tunes, and wandering the countryside ... life is so much better on days like today!! 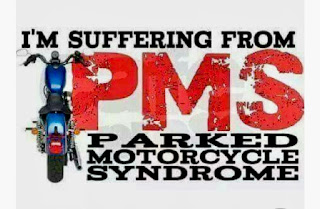 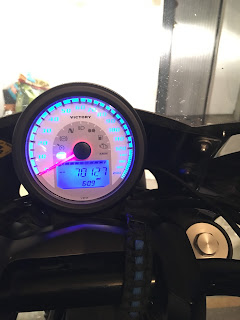