After a couple of rough weeks on the work and home front, I just needed to get the heck out of dodge. Not really knowing where I wanted to go, I called my friend in Texas to see what she was doing in 1.5 weeks and she was surprisingly off of work all that weekend. So, that set into motion the plan of me riding down to visit and hang for a couple of days on a whim. Thankfully, my boss approved the last minute time off request. I met with  a friend to ride local one afternoon about a week prior, and mentioned Texas, her response: "I'm in!". As crazy as my ideas may be, I am lucky to almost always find someone to go with me! I was going to do it regardless, but having company along the way is nice. We took off on Friday morning at the ass crack of dawn - a balmy 27 degrees. 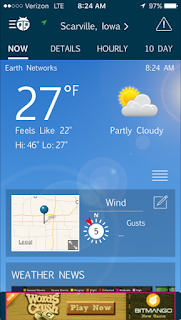 As we crossed into Iowa, the clouds were building and the skies were getting a bit gloomy looking. We stopped in Cedar Rapids to check the weather and sure enough, we were about to ride into a massive storm system, pretty much for the next couple of states down. Stopped for gas and rain gear in clear lake. 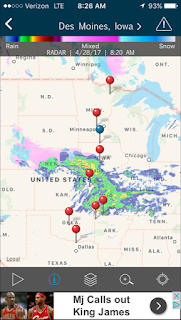 We put on our rain gear, had a couple cups of hot chocolate to warm the insides, and off we went into the rain, the sleet, and the hail pellets. But not before a guy with an eye patch came up and was being sarcastic and then said he just took his bike out today..(!!) I asked if the eye patch was from his wife punching him for waiting so long to ride... he laughed, said no, but (and I quote!!) "haha I'd let you hog tie me and punch me anytime." Wth?! All I could say was ((no filter) " well that escalated quickly for 8am," and I walked out to see Shelly struggling with hart rain gear. It was new and she couldn't get the pants over the jeans AND chaps- I mean, she DID, but the legs wouldn't zip. So I busted out the tape and taped em off to keep then zipper half shut. Only I did it While she was sitting down with her legs straight out. And that's not how she rides (haha) so when she went to sit on the bike...well she lost feeling in her legs real quick. A little adjusting of the tape so she could have blood flow back and we are km our way south!!

We managed to ride for a couple of hours in STRAIGHT line winds, crazy heavy rain, sleet, and then came the pellets, where we caved and stopped just into the MO border to give our bodies a break. We were frozen, soaked, and beat up from the weather. We ended up loitering at the rest stop for almost an hour - we could see the storm system was coming to an end so we waited out some of the worst of it. Sucked that it set us back an hour, but worth it, because those sleet and hail pellets HURT a lot while going 80 down the freeway! Add in icicles on my eyelashes and I was toast. While sitting in the entry of the welcome center with our wet gear spread out like we owned the place, and a HUGE puddle all around us, we walked inside the staffed area to war, up and met the gal working. She's super nice and super chatty - and fascinated by the fact we ride and are in the line of work we do. She made passsing the time fun! And also fed us unlimited hot chocolste and coffee so - we are all going to be bff's for sure! After hanging out for an hour+, the winds died down, rain was minimal, and blood returned to liquid state, we started to gear up to head out. Not even to KC yet- so we have a lot of riding left today!!! 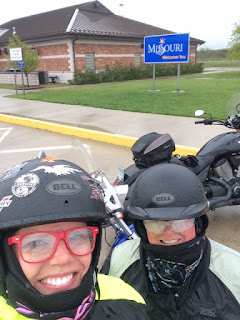 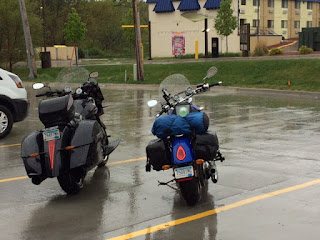 As it started to get dark out and we were determined to make it to Sherman (just north of Dallas) for the night. We were so close (4 hours) yet so far away.  We got into Sherman around 11pm, texted with our friend for directions, and as we turned onto 82 - the last road for our journey that day, I beelined the gas to make the green light and next thing I know, I was airborne. Like, flying. Not just a little bump airborne, SAILING like a kite airborne. Talk about a WAKE up moment! I looked behind me just in time to see Shelly SLAM on her brakes after witnessing the 'speed bump' aka tickle belly hill...and she was able to slow down enough not to fly. It was too late, we were tired, and had rode too many miles to take flight!

We saw a car on the shoulder with the flashers on, which was our friend, to guide us the remaining few miles to our home for the night. We bunked out in an RV - there were 4 of us - and one cat. Poor Shelly is super allergic to cats, but she was a trooper and didn't die, so that was a good thing! We spent a couple hours sitting outside in the WARM and humid weather, drinking a couple of beers with Laura and catching up. It *only* took us 18 hours to get from Minneapolis to basically Dallas - and considering the temps of 27 when we left, plus rain/sleet/hail, I would say we made good time!