- May 07, 2017
The next day we slept in a little - reloaded our gear into the bikes after drying everything out for a few hours and headed to the Texas Country to our friends - friends house. We were in the middle of nowhere Texas - down a REALLY long gravel driveway we rolled - up to a trailer house. I believe that the description by our friend prior was something like 'its a cute house - it fell off the trailer while moving but she's done a lot of great work to it". Wasn't sure what to expect. One thing I wasn't expecting was to open the front door of the house to see a king size bed in the living room. The house was decorated super cute - it was the little things that threw me for a little loop here and there. First, the bed, then the bungee cord contraption system in place to keep the back door shut. I am not good at mazes, which I knew. And this confirmed i am also not good at problem solving to get outside. Anyways - back to the point. We were going to chillax and BBQ and have a bonfire. First we hopped on the bikes to go to a little dive biker bar and next door shop. Had we ridden through the 'town' on our own, we would have NEVER known the place was there, let alone OPEN for business! Bummed around the cute shop for a few mins and then headed to the, what looked like a deserted bar/building.


Let me tell you, we saw some AMAZING sideburns there. Memorable, for sure. 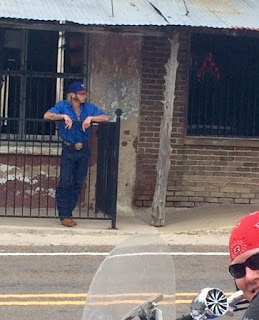 As we went to leave, Friend A rode B* on my bike as hers was in Dallas. Little did she know, when Shelly and I were at the reststop in MO to warm our bones, they had signs - florescent yellow signs on 8x11 paper that said "CALL POLICE". They were intended to be placed in a car as needed, but I had an even better idea. I took a few, thinking they would come in handy at some point! As we loaded on the bikes to go back to the house we were staying at, Friend A jumped on the bike and another gal strategically held the POLICE sign up behind Friend A - who had no idea what was happening. It was hilarious. She rode the whole way back without a clue! 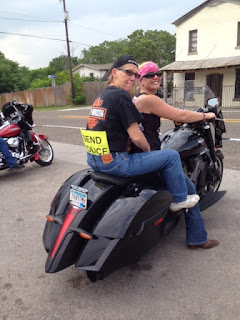 We headed back to the house and the skies were turning a nasty shade of blue/black/greens. Check the waether and sure enough, storm warnings all around us. The temps dropped from 83 to 70 QUICK and the winds started howling. We moved the bikes under the lean to to give them some protection from the imposing elements - and hoped for the best. 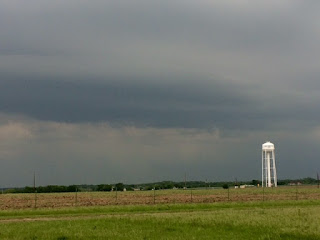 The BBQ was moved under the tent, the bonfire idea was gone, but the drinks were cold and laughter was abound. Oh and the place had an AWESOME dog - as Shelly said "Even the DOGS are bigger in Texas!" 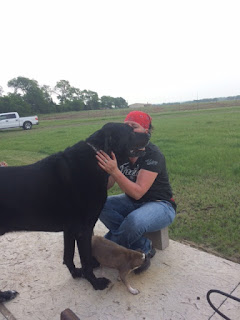 The winds continued to howl, the skies turned all sorts of gross colors, there were lingering clouds threatening to turn into twisters, and while the weather wasnt panning out, we made the best of it and took the party indoors for some board games and smores. Yes, we made smores indoors...with a blowtorch. Keepin Texas Classy! 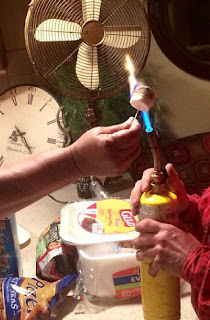 As the night wore on, I kept going between being worried @ the weather/bikes and being completely shocked at the events of the trip so far. It was way random and not what I had in mind when I said "Wanna go to Tx?" As we were all winding down in our intoxicated stupor, Shelly and friend A went to the far back of the house to grab twin size mattresses and drag them to the other end of the house so we could make our beds. Two twin mattresses, on a floor, with 3 people sleeping on them. Then one gal was going to try out her new blow up mattress 'thing'. She opens this rain gear material package that was shaped like a really big, old school sleeping bag (the rectangle kind not that fancy mummy stuff). Then she opens the one end and starts sprinting from one end of the house to the other. I had no idea what the heck the contracption was, but watching it all play out was entertaining! Because I wanted to watch the show for a bit, I didn't mention 'maybe we should read the instructions' right away. They all mocked me saying they didn't need instructions. But when I opened the picture instructions up I nearly died of laughter. Really - how could instructions be THAT funny? Well, YOU try to read this and not laugh!!!  < And if you don't laugh, don't tell me. I am easily entertained and like it that way! >


This is Shelly's first time in TX - while she didn't get THE Texas experiences (cowboy hats, long horns, etc.) she DID get probably one of the most memorable trips to TX she will ever have. 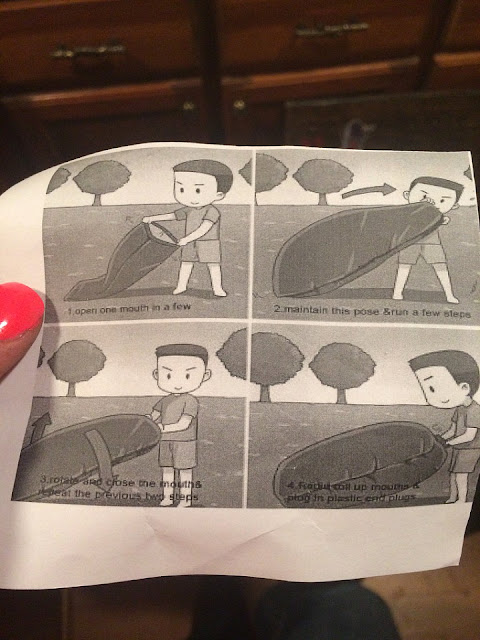 Needless to say, we all gave up on it and the three of us went and passed out on our two twin mattresses. While there were only two people in that big king bed in the living room....