- September 14, 2016
I've been pretty fortunate so far in 2016 - I've managed to make my New Years resolution of going on one trip/adventure out of MN each month. While there were a ton of highlights, June brought an unplanned, long weekend trip (weird!) to Pike's Peak in Colorado which was exciting as I'd never been there (on motorcycle anyways - which is all together a diff experience than in a vehicle). We had 3.5 days to conquer 2,044 round trip, not including riding while in that area. We left early in the morning to try to conquer the 1,022 mile ride (one way). Turns out Nebraska is THE most boring state ever and it made us way too sleepy to finish the ride, so we crashed (slept) in west NE, leaving just a few hour ride to Pikes Peak for the morning.

We lucked out BIG time on the arrival part of things, as Pike's Peak is only closed FOUR times a year - and guess what? That weekend was one of those four times it would be closed- for the Pikes Peak International Hill Climb.

We weaved through Colorado Springs towards the Peak of Fun ~ we rolled through the entrance and paid the fee $12 (naturally, because I am cheap, I found an online bargain for a few bucks off each entry). We started up the mountain which was pretty winding and twisty right off the bat. The edges of the road were steep, with minimal shoulder space, and lots of big pine trees that I didn't want to meet in person. ﻿﻿﻿
﻿

Because of the hill climb, there were signs and spectator areas set up throughout the uphill ride, complete with hay bales on the sharper corners. (By 'sharper' I mean the ones you can't even see where the road goes, let alone through any part of the corner - every corner on that ride was sharp in my mind). I'm still baffled as to how hay bales would help if a person crashed - the first place racer made it up to the top of the peak in 8 mins and 51 secs...which is an average of 81mph! Hay is not going to cushion one's flight off the side of a mountain peak which is either full of trees all the way down, or rocks and boulders, at 81mph! < side note: I hit a max of 32mph and the boy probably hit 40 mph - both were a little too fast for my liking>. But I digress....﻿﻿﻿﻿﻿﻿﻿

As we climbed higher and higher, the road got steeper and windier and it and it got colder. The trees gradually made way to rock piles and cliffs that went straight down to another part of the road.
We stopped to play in some snow (he wanted to make and throw snowballs... it wasn't funny when he was going to peg one at me, but when he went to throw one at a convertible with its roof opened, the shrill squeal that came out of the fancy looking lady passengers mouth was highly entertaining)..  we stopped to take pictures - the views from the road were stunning - it felt like I could see for 100 miles. 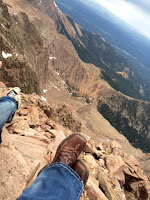 When we made it to the summit, both of the bikes were a little angry at us, as they were having a moderate asthma attack due to elevation. We walked around the summit, soaking in all of the amazing views. When I walked around to the back of the gift shop, there were a 'pile' of huge boulders, each one hanging over and onto the next one in the pile. Those who know me, know that I LOVE hanging off the edge of things - the view is better, the air is crisp, and the picture is truly worth a thousand words. But little to my dismay, the perfect rock that hung well over the rest of the ones in the mountain side pile was taken..... Grrr... SOmeone stole my idea! But as I got closer, I recognized the leather jacket of this rock thief...I wasn't sure whether to grumble that he stole my idea, or smile and shake my head because he has the same thought pattern as me. Mind you, I don't really know this guy aside from the 'referral' I had, but he sees pretty fun and crazy! Most people call me crazy.... but now there was 2 of us 'fighting' for the best, highest, biggest boulder to sit on so we could hang our feet over the 14,115 summit edge. < we each took turns and 'compromised' by taking double selfies on said rock > haha!
Then he said he had to send the picture of him to his mom because she would 'freak out'... I couldn't help but laugh, as I always send the best pics (cliff hangers) to my mom and she is not so much a fan of them! (My dad is to a point - he can't say much though because he would do the same thing!) We sat on that rock and just soaked in the view, the sounds, the smells of the top of the world. It was incredibly breathtaking and relaxing. We could have sat there for hours, but because it was so relaxing, that would be a bad idea because we could've easily fallen asleep... or froze as the temps were dropping quickly with the approach of dusk. We headed back to the bikes and bundled up - putting on more layers and face masks and gloves. The boy wanted to go fast down the 'hill', while I was busy putzing and taking pics of the views and cliff edges. I came around the first few turns and there were 2 mountain goats just chillin right on the road eating whatever mountain goats eat. They couldn't care less that I was going by.. its a great picture!

As I was winding down the mountain side taking in the variations of sunset and whisks of clouds masking the sun (more great pics!) change dimensions, the boy had shut his bike off and was literally coasting down.... he coasted from 14,000 feet to the gateway, which was 7,400ft. At the gateway, there was a guy who stops everyone to check their brakes before allowing them to continue to the bottom. He said the sounds were great on the way down in the silence - wind, animals, rocks, etc. I can't remember what his brakes were at, but, had it been a car, he wouldn't have been allowed to continue for awhile. Mine were fine - he didn't even check them. Must have heard me cruising down at a slow, but decent, pace.

After making if off of Pike's Peak in one piece, we found ourselves in a little town outside of Colorado Springs, called woodland park. We asked the locals where 'the dive place' in town was and they directed us to the Ute Bar. We stopped for food and a birthday beer and we ended up making lots of friends. Next thing we know, it was dark and we had no where to sleep. I called around but because of the hill climbs, everything in a 60 mile radius was booked. Literally. Several hours, and drinks, later we started asking people if we could set up a tent in their yard because we were essentially homeless. We even consulted with The owner of the bar and found it was private propert so we could set up a tent right there, worst case scenario. To my surprise, we had more than one offer from locals to crash at their house. I think the boy, who was an instant karaoke star, probably helped the cause! We ended up meeting a cool Chica and her soon to be hubs, who had tattoos on his hands and neck and everything in between~ and whose nickname was 'SICK'... (All that would usually make me scurry away)! And they offered up their couch in the living room just up the road. So as the lights came on in the bar, our tab was paid, our voices hoarse from singing and talking all night, and as our last drinks were consumed (lots of them in celebration of the boys BDay!) we headed off into the moonlit streets of Woodland Park, to sleep on random strangers couch, one of which goes by the name 'sick'. And we told bo one where we were because our phones were nearly dead and it was literally the middle of the night back home. What could go wrong?!  Turns out they were a on of fun, even woke up and made coffee and gave us a ride back to town to our bikes, which were thankfully still in the same spot as when we rolled in not even 24 hrs prior, for a burger and 'a beer'!! The best stories are those not planned in any way and shared with people who truly make you happy! Now 1,022 miles back to MN we go after having minimal sleep, on a shared couch, in strangers' home,  in a random town. 😄 and we were all smiles the whole way!


Side note: Fun Facts about the Pike's Peak Hill Climb
The first hill climb was in 1916 and is 12.42 miles of public road that has 156 (SHARP!) turns in all. The race starts at 9,390ft and ends at the summit, which is 14,115ft. The race is open to Sidecars, Motorcycles, Semi-Trucks, Enduro Bikes, and 1,400+horsepower vehicles. There is $100k in prizes - with $25k going to the person who can complete the race in under 8 minutes, and the rest going to each class and category.
From: http://www.ppihc.com/updates/2015/10/30/event-structure-for-100th-anniversary-of-the-broadmoor-ppihc-announced/