- September 30, 2016
NW Arkansas for Bikes Blues and BBQ rally
was nothing short of amazing, as usual. The weather was perfect - sunny and in the upper 80's every day. The lodging was great - both our hotel for a couple of nights, our AirBNB house in Fayetteville, and our AirBnB cottage in Eureka Springs. We had several days of stellar riding - a total of 2,270 miles in 6 days. My bike turned over 35,000 midway- right as we rode back into Eureka Springs - my favorite town in Arkansas.

This was our scene as we rolled into Eureka Springs after 11 hours on the road. I felt like saying WELCOME HOME - I love it here. 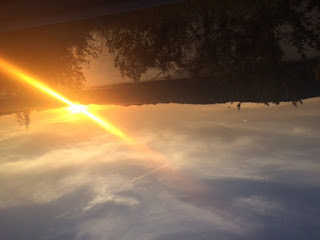 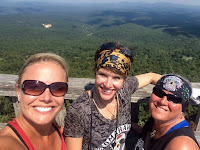 The three of us girls had no issues with our bikes, no injuries, and no regrets on the roads we took!

Well.. there was one potential (should have probably been an issue) issue the morning after our arrival (the morning I woke up on the floor thinking someone was in my bed, when in reality the effects of Tequila Sheila made me think bunched up blankets were a foot...) Here's a peek into the effects of Tequila Sheila's ideas the night prior.... and how I felt about them... Wasn't a fan of those Harley folks behind us that kept trying to convince me why I should switch back to Harley. They eventually got the idea that I was NOT going to cave on my I HEART VICTORY stance and they should probably quit trying...  Anyways... back to the next morning heart stopper- 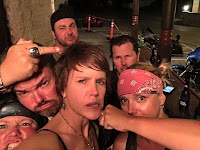 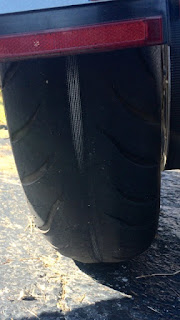 As we walked from our second floor hotel room down to the parking lot, we noticed a bike (Victory - clearly trying to hang with the kool kids club) wedged in between our 2 bikes. Who the heck would park there? There was not another vehicle in the entire lot, yet the person decides to park right smack between us. Weird. Anyways - said person was sitting behind the bikes having his morning coffee when he laughed and pointed at the bikes, and in a thick southern/Arkansas accent said "Someone needs a new tire". Neither of us understood him at first, so naturally we smiled and gave a half laugh... when suddenly it registered that he said something about needing a new tire. I bent over to look at mine - my rear tire was brand new Monday, so I was thinking he was nuts. But then I look over at Shelly's bike and stood in shock at what I saw. Are those WIRES showing on her tire? Sure enough.... and she says "Man, do you think I can wait til we get home to change it?"  Um..... NO!!  The boys exact response to the picture was "Do NOT drive any farther than the nearest tire shop on that". So we start googling tire shops and calling tire shops. You would think during a rally, tire shops would stock up on things that are guaranteed to be needed - but, that is not the way Arkansas'ns think. Nope, the nearest tire that size was 36 miles away. Suddenly, after riding 800 miles in the last 24 hours, 36 miles seems REALLY FAR. I suggested Shelly, even though it was literally 94 degrees and blazin noon sun, put on full leathers just in case... I wasn't overly confident that this ride was going to be a good idea. So off we go 36 miles. Mind you, I LOVE twisty roads.. and every single road in that area has S curves or switchbacks... this 36 miles was no different. All I could think was... well, at least in the corners she will be ok since she still has some rubber left there. I was leading the crew and sweating profusely in worry, while asking whoever was watching this play out to let us make it there safe. Ok, let HER make it there safe! Finally! I can see the Indian dealer sign ahead... and Shelly is still back there and upright... whew! We pull into the dealer lot and I am pretty sure the three of us exported all the air in our lungs at once... huge sighs of relief. I bend over to look at the tire to see if it got worse and I can't say that I have EVER seen a tire that bad... on a vehicle that only has TWO tires!  This is what was left of the rear tire..... I have no idea how she made it 36 miles!!! 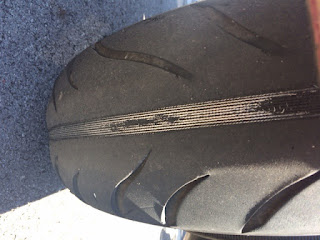 After slappin the new tire on... and after Shelly having to ride B on my bike which in itself was worth the trip!!! We headed out to seek fun roads! I bought a Butler map when I was in AR this spring with the boy and I LOVE Butler maps - it color codes motorcycle roads by twisties, views, and pavement.
I found a new favorite road just north of Eureka - highway 76. Its constant corners/s curves - to the left, then to the right, and repeat. I managed to get a video - if I can figure out how to upload it I will! Traffic overall was minimal, considering a major bike rally was happening a mere 50 miles away. There were several twisty roads that had zero traffic - which allowed open throttle for cornering - heaven! You'll have to turn your head to see the pics - I'm slightly technically challenged at figuring out how to make them upright. 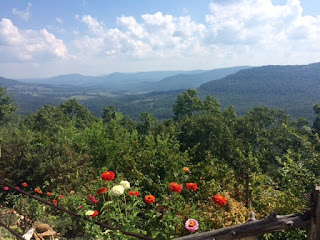 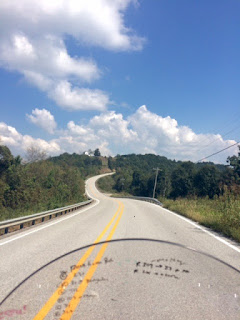 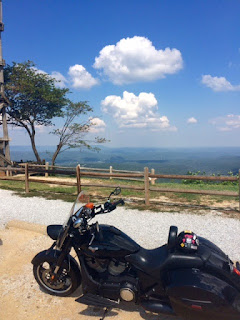 Awesome road to the Arkansas Grand Canyon, with views as far as the eye could see!

We spent Friday night in Fayetteville, where the actual rally was centered. I found a house of a random stranger on AirBnB - it was walking distance to Dickson St (hub of action), it was 1/20th of the cost of a hotel and its got to be legit, I mean, I found the place online! And the owner, Martel, cleared my investigative check - it wasn't hard to find info on a guy named Martel in the town of Fayetteville. He's kind of a big player in the city (the good kind of player) and he checked out on the Arkansas Court Records website. Yes, I checked. My dad taught me a thing or two about investigative work! We got to Martel's  house and he left the door open for us. We walked in, cracked a beer, dropped off our stuff and hiked uphill (theme of our weekend) to the main drag.

More about that later..... Here's the jist of the fun that we were about to embark on! 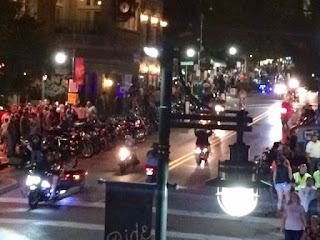