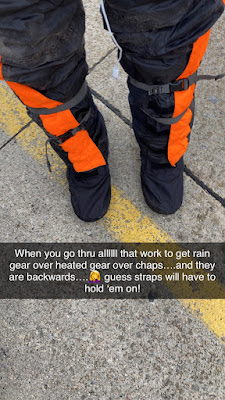 I don't know about you, but here in MN…spring has been MIA. It has been colder than usual, dreary, and soggy for weeks. My soul was dying a little each day I woke up to yet more clouds. Knowing I would have my 40 hours in by early Friday morning, late Thursday night, while grabbing a beverage between periods at the Wild hockey game, I decided I would take off and ride. To Arkansas. It’s an easy ride there, forecasted sunshine and warm temps, and no thought involved since it’s my fave place to ride. Naturally, Stiffy was IN for the challenge. After watching the winning hockey game in the first row on home ice, and getting home way late Thursday night…I packed the bike and dozed off for a few hours. It’s weird how quickly I dart out of bed for work when I know I get to leave early and ride!!! I met Stiffy in the south metro and off we went. We managed to dodge all the rain, only after putting on rain gear of course. What a debacle that first time putting on rain gear is! Add in multiple layers to stay warm and well…. 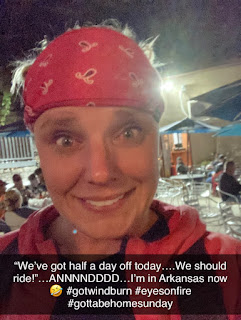 We kept riding and were within 30 miles of Arkansas, and darkness had taken over. We rounded another corner and something shiny caught my eye (weird!) in the ditch. It was a second after the fact that my brain registered it was a motorcycle. We whipped around to help and see a guy on his motorcycle several feet into the water logged, muddy, ditch with his head and handlebars being the only visible parts from the roadway. He said his headlight had went out and he couldn't judge where the side of the road was, and as he was pulling over, he ended up in the ditch. However... he appeared to have LAUNCHED deep into the ditch at an angle suggesting he wasn't just trying to pull to the side of the road...regardless of what actually happened, I helped push his VERY low riding motorcycle while he gunned the gas to creep out of the muddy and somewhat steep sided ditch. He got the front wheel onto the roadway and stopped. The rear wheel was still very much in the mud and 'downhill' from his front tire, causing him to start sliding backwards even with the brake on. I got out of the way, he gunned it once more and jumped onto the roadway, then riding into the night. With his headlight fully functioning.  Oh, the people you meet on the road! We headed to the Cathouse Pub and searched for a place to stay for the night - finding one not far up the road, we headed there to rest the bikes, our butts, and our eyeballs for the night

Saturday brought us SUNSHINE, heat, and 250+ miles (8 hours) of amazing roads - all the twists and turns a girl could desire!! Considering the weather, it was odd that we seemed to have the roads to ourselves. Going from dreary MN, where things are just starting to come alive and turn green, the neon green we found in Arkansas was an added bonus. Spring has very much sprung there - only confirming that we made a great decision to ride there, even if it was only for a day!! 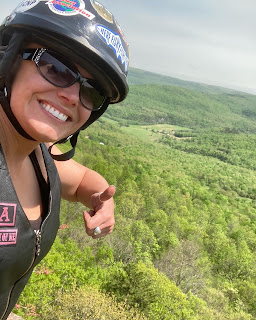 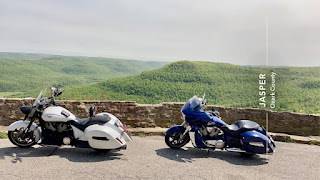 To celebrate the amazing day, we headed to local hangouts in town (by feet, not on bikes) and met up with some old friends we have met over the years in Arkansas, and made some new friends too.

With the 'ditch guy' on the way into town not wanting to be outdone....the finale of our last night (or day 2 of our 2.5 day trip), was a little close for comfort! I was at the bikes getting situated for an early morning departure back to MN, and the spot we had parked in was right next to the entrance for the hotel. I hear a bike coming and before I could look up, I hear an insane REVVING followed by a thud. Out of the corner of my eye, i see the bike, complete with driver and passenger, landing on its side, the passenger spilling off and hitting her head, and the driver standing up and swearing....meanwhile, his bike was still running (for a very short time). I don't know the time span, but in assessing the passenger to see how hard she hit her head and if she was bleeding, the driver not once asked if she was ok, nor offered to help her up. Instead, people in the hotel on the upper level had the time to look outside, see what happened, throw on shoes, and run down the stairs to the bike before he even acknowledged the passenger, and by acknowledge, he swore at her. I asked if he wanted help getting the bike upright and he said "I don't need help, I know what I am doing." and he walked around the other side of the bike, the side that was in the air, and began pulling on the handlebars to try to upright the bike (TOWARDS himself). I go over and assist in not even pushing it upright, just stabilizing it so that if he got it upright, he wouldn't then drop it back down on the passenger. Instead of teamworking the bike upright, he swore at me to stop touching his bike. I said, if I let go, the bike will drop back down. He said 'F you', so i let it down (slowly). 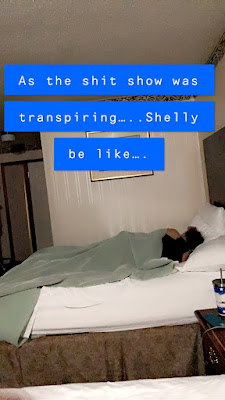 He then went on the other side of the bike just as another person came to the scene and offered to help him upright it. He was JUST about to push the bike back upright... where it would have just fallen back over as he didn't put the kickstand down or have any other way to stop the bike once in motion. Which is exactly what happened next. He eventually gets the thing upright, turns it on, hits the gas to leave, and turns the wrong way into the oncoming traffic lane, and dumps it again. At this point, I left and helped the girl to her room while asking if she needed an ambulance. I get back to the room, and find Stiffy sound asleep, peacefully dreaming while this whole debacle had played out. 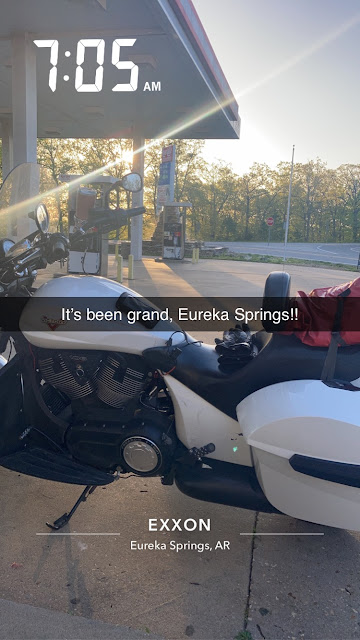 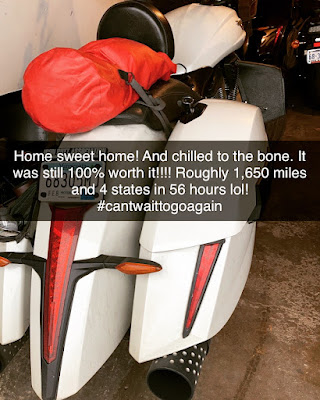