A Harley guy and a Victory Girl in Key West - Scooter Shenanigans! 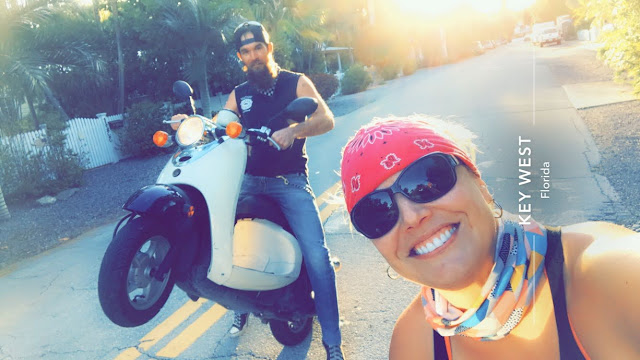 We lucked out with the minivan idea, finding a place to call home (Boyd’s campground), and having amazing weather gods looking after us. We woke up the next day ready to explore the Keys on 2 wheels. We found a rental place that delivered the scooters directly to our campground – and one scooter was only $50 for 24 hours – what a steal! We got our two identical twin scooters delivered right outside of our minivan. 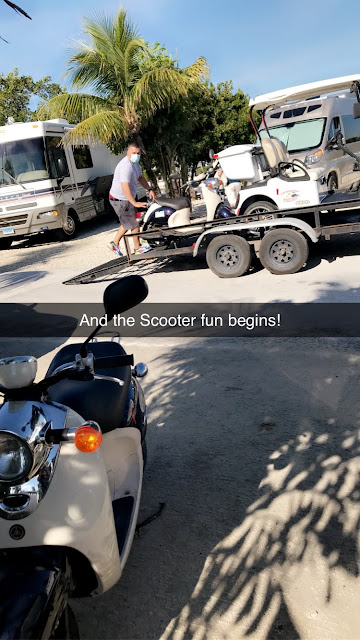 The guy dropping them off said “There is plenty of gas for 24 hours…” to which Scootertrash and I side glanced at each other and laughed, thinking…” You underestimate us buddy…”. 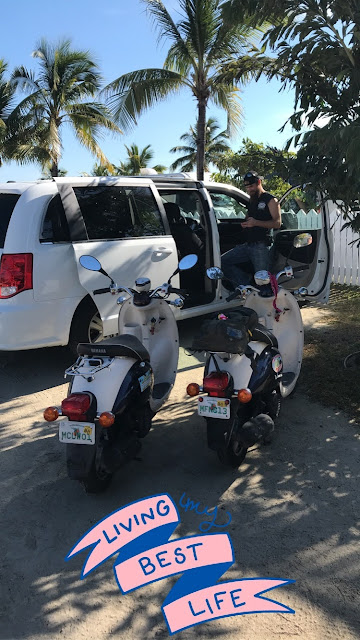 We then asked a gal how far Key Largo was – she said, “Only a couple hours”, then we added in, “On a scooter.” With an “are you kidding” look, the gal said “No.” And then laughed at us. We hit the road on our little scooters. At the 2nd red light,  Scootertrash and I looked at each other and had one thing on our mind: “I am totally going to crush you when this light turns green.” To prove our ‘seriousness’ of the challenge, we each revved our big engines, which because there was a slight breeze coming off the sea, only we could hear. The light turned green, I was hunkered down to try to get a better aerodynamic advantage in place – which was all good and fun until we rolled towards the TINYEST of inclines. That is the moment two things happened. 1.) I looked down and realized that the speedometer on the meep-meep scooter topped out at 40. FORTY! 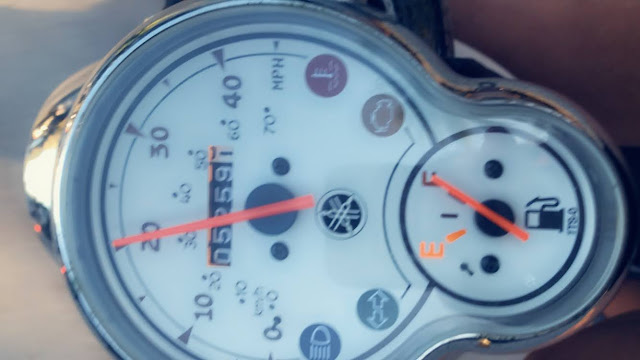 Huh. I wasn’t prepared for that moment or snip of reality. 2.) I am chubbier than he is. 3.) I was going to lose this challenge without a chance of catching up once my front tire of my massive scooter started up the teeny tiny incline. And all of that came true, I won’t say quickly, because, well FORTY MPH max… but darn it, I really wanted to whoop him on the first scooter challenge of the trip. And while I had the gas pegged all the way down, he left me in the dust. Grr. Learning my lesson, and not wanting to be whooped again, I would hang back and wait for him to slow down a little then “gun”it and well, I would catch up. But that was all the little scooter could do. 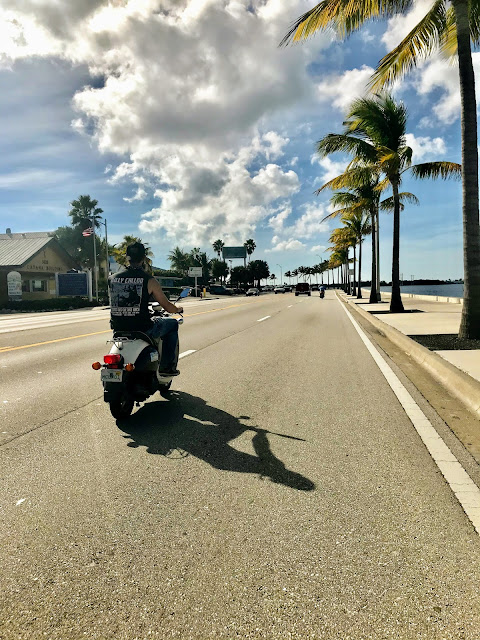 So, we rode side by side along the ocean, Scootertrash with his Billy Called shirt on, ripped jeans, and chucks on, and me in a NON GypysBikerChick fashion of a miniskirt and cheap flip flops. 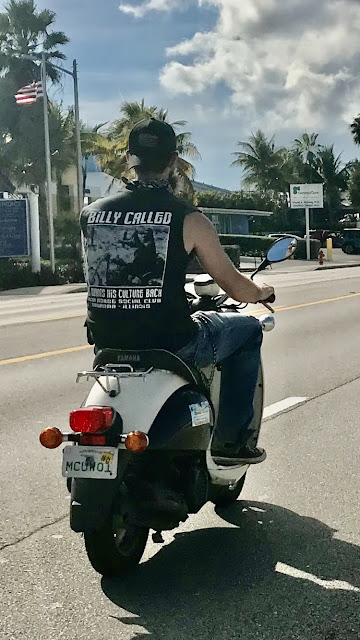 I certainly did not maintain the biker appearance well in the Keys, lol. We ripped all over Key West on the scooters. Every time we would come to a stop sign or a red light, he would lock up the brakes and squeal the massive scooter tires – to the point everyone we came up behind would quickly look in the rearview as though we were yet another set of tourists about to crash and burn on a little scooter. Then we would laugh hysterically and carry on. We pulled up next to a guy on a bigger scooter and Scootertrash asked if he wanted to race, while popping a mini wheelie to show the seriousness of the offer. The other guy said, “Not today! The only thing holding this together are the stickers.” 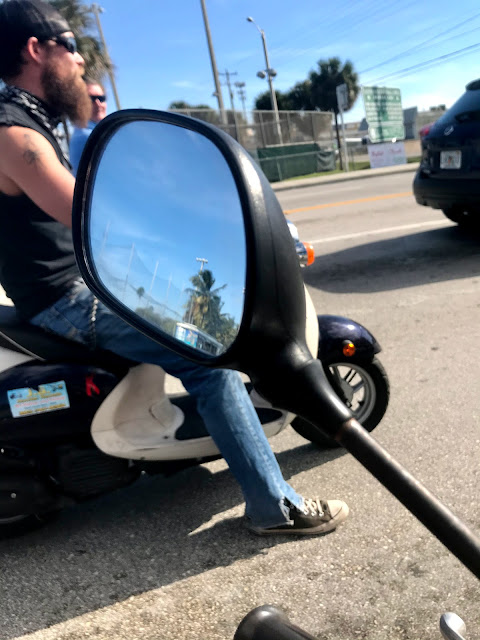 The only way I figured out how to ‘one up’ Scootertrash, was to use my scooter blinker for every turn. Which seems like a normal course of action while driving. But I would use the blinker AGGRESSIVELY and excessively. Because of all the sounds in Key West as we were riding around, the most definitive sound on the island was that darn blinker. It was literally louder than the bike, the sound of traffic, the music playing on the speakers in the streets…. Everything was tuned out by that god-awful obnoxious blinker. And since I couldn’t win him in a race off, I was determined to be that obnoxious girl with the loudest blinker in the Keys, who left it on far longer than necessary. On purpose. Between the blinker and me yelling out "COCK!" every time I saw a chicken, which for whatever reason, are overly abundant in the Keys,  my obnoxious ideas kept me entertained for most of the day. 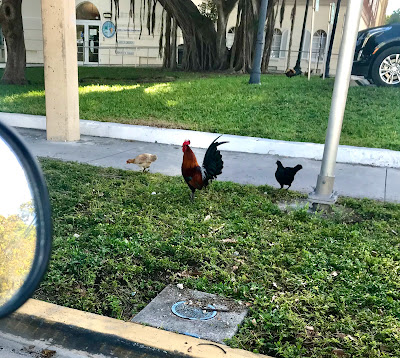 Well, that and the fact that I have never enjoyed a center stand on a bike. They are a struggle for me to operate with real biker gear on, let alone cheap flip flops and a skirt. So, as I came to find my purpose on a scooter (blinker annoyance), my AHA was quickly crushed at the first stop we made. Because I could not get the stupid center stand down with my bendable flip flops to save my life. So, once again feeling a bit defeated (all in good fun), I started to snap my fingers when we stopped. And then I would wait for him to come rescue the damsel in distress by parking my scooter for me. 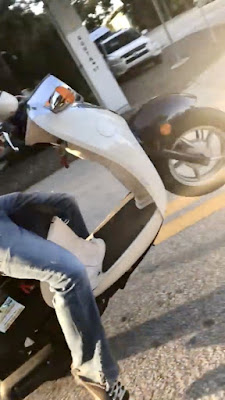 And so as we continued to hot lap the island – him doing squeal stops and wheelie take offs, me leaving my blinker on for several blocks and cornering like I was on my Victory around the roundabouts, I can only imagine how many people saw us and thought, “They are never going to make it on those scooters”. We had an absolute blast on our little matching scooters over the course of 24 hours. And both the bikes and the drivers managed to stay in one piece through it all!  If you make it to Key West, I highly recommend scooter rentals. No experience needed, they are cheap, and parking is abundant, unlike in a vehicle! 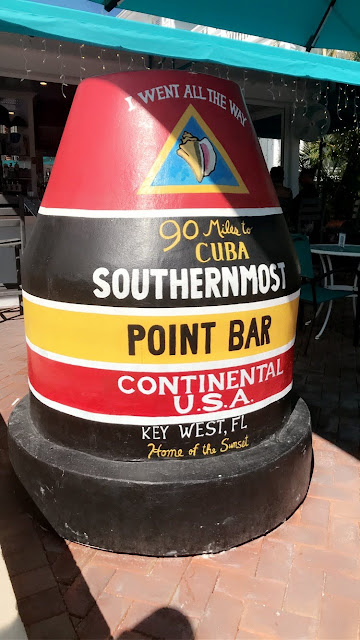 We parked the bikes and ubered downtown that night, where he collected a variety pack of drink decorations, and then added them to the bike when we ubered back to the van to 'pretty the bikes up." 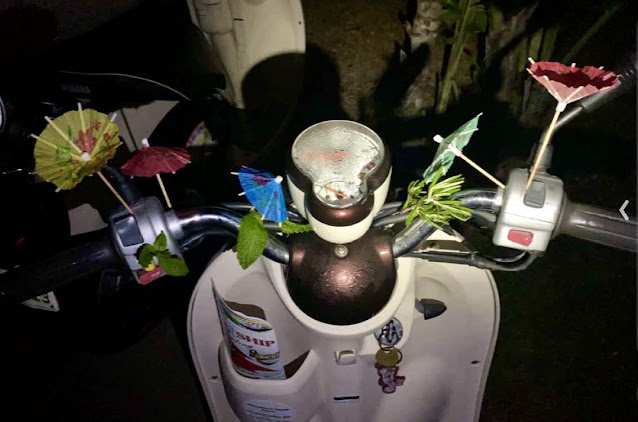