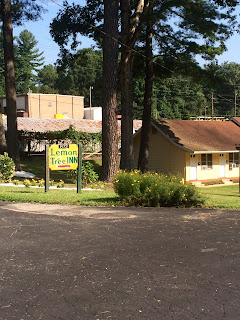 "Please for the love of all your worth, do not put yourself through such an experience. Bates motel was luxurious compared to this place," - A Real TripAdvisor Review.

The Lemon Tree Motel - a spectacularly bright and cheery looking motel in the hills of NC. Bright green trees and colorful flowers in full bloom hanging over the curvy, pleasant, country roadway leading to the motel. A welcoming sign with more beautiful flowers as we pulled into the parking lot under the modestly cool sunshine of the day. One of the first days of the trip we parked the bikes before dark. Looking forward to relaxing with a cold drink in hand, we parked in front of the two story, happy shade of yellow, mom-and-pop motel. 6-8 rooms on each level with another 6 rooms in another single level section of motel through the grassy lawn just yards away from the main lot. Under the overhang of the second story was the office, noticeable only because the short set of steps from the parking lot led straight to the cute little tucked-under office door.

I waited at the bikes while Stiffy went in to register, and as the minutes passed, I started to feel eyes on me from the upper level and the single level building just across the way. As the minutes went on, more eyeballs we peeking out at me from the shadows, the sunshine started to hide behind the clouds, the happy shade of yellow paint turned over-ripe lemon shade, the bright colored flowers turned out to be plastic, and the cute little tuck under office was dark, dingy, and creepy looking. 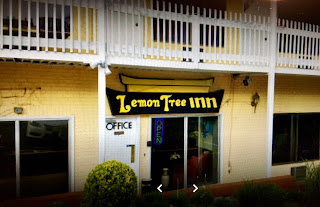 Keenly aware of the changing 'feel' of the environment around me, I left my sunglasses on so I non-nonchalantly scan the area while keeping an eye on the office door waiting for Stiffy to come back out. There was no one else in the parking lot so clearly no one else was checking in, but Stiffy was gone for what felt like a LONG time now. I casually opened my saddlebag, and while making it look as though I was digging to find a long lost treasure, buried deep in the bag, I was really just bending over the bag for cover from the peering eyes as I moved my Glock from my vest pocket to my waistband, in preparation to walk into the dark, dingy, poorly lit with bad curtains, office area in search of Stiffy. 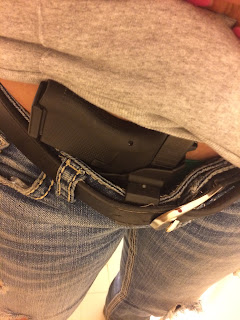 I locked my bags, fluffed my hoodie over my waistband a bit, scanned for a head count in the shadows (3), and headed 200ft to the short set of stairs that led down into the office.
I reached for the door handle with my left hand and flung it open like I was walking into a Wild West Shootout. It was a bit aggressive, the bells swinging violently into the door frame to announce my arrival, as Stiffy's head whipped around, and the gentleman behind the dark paneled, home made 'desk', full of newspapers, different colored post it notes, and crumpled paper, flung his head upwards at me. I casually smiled and said hello, as though I didn't realize how much force I had used to open the hollow door, while once again scanning the environment. There was a long, dark hallway straight ahead, with a ridiculously bright, single light bulb dangling from a post in the ceiling at the end. Like the kind you see swaying back and forth in a scary movie just before something bad happens.  To the right was a mock snack area with coffee and unknown pastries. To the left, a super low couch, tan and blue, with the bottom of the couch having the old school curtain panel on the bottom,  hiding whatever was trapped underneath it in the brown and yellow carpet that, 50 years ago, had been shag carpet.  Stiffy had just finished the payment transaction as I walked in, and while I was happy to see she was unscathed, I was not too pleased at my timing. 2 minutes sooner and we could have aborted our plan and not had a commitment to this place. The man behind the desk stood up, walked around the desk, and exclaimed, "The first beer is always free at the Lemon Tree!".  The man reached towards the super tall, double wide, stainless steel refrigerator at the end of the scary hallway and offered us "any kind we want" from the alcohol selection he happily said he has collected 'over the years'. "Try the Japanese beer", he says, "It's 9% alcohol!", he says.  We opt for more known brands, and were sure to crack the tops off ourselves, with the bottle securely in our hands while doing so. Then we turned and walked back towards the office area and outside, where the sun was now replaced with darkness.

We unloaded the bikes, as eyeballs watched us from the shadows, and got up to our room, the end room on the 2nd level. The one with the huge crack going all the way across the window, corner to corner, with a smaller crack veering off the middle area, securely taped in place with yellow tinted scotch tape. Behind that was a thick brownish red curtain on the inside, with a stained white backing facing the cracked window. "I'm sure it's fine", I kept telling myself as I neared the door. 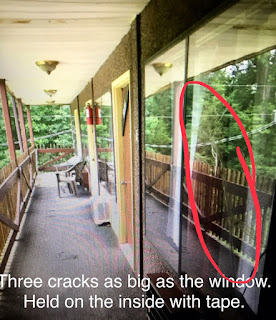 1...2....3.... OPEN! Nothing seemed to run for cover. It was dingy smelling, but not as bad as I expected. It was old and in need of major updating, but having no other choice at that moment, it had to do. There hung another one of the horror movie style lights. Nice theme they have going on throughout this place. 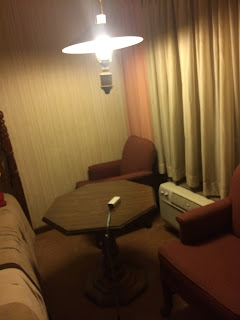 After spending 7 minutes in the room, with the door closed, it turns out it was not really fine. There was a fairly strong odor throughout, that only got more rancid once we turned on the AC. So, we walked outside for fresh air, found chairs, sat down (ew), and drank our beers, unsure if we should be happy about being done riding for the day, or fearful about surviving the night unscathed. 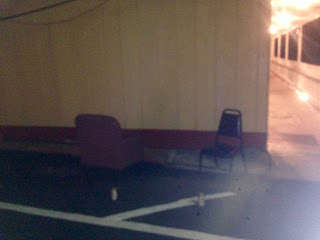 As we sat and our eyes adjusted to the darkness, the place got creepier. There were a LOT of people in the shadows. There were loud cars screaming into the parking lot and then peeling out just as fast after a quick stop to say 'hello' to the shadows. There was an SUV that pulled in, a person walked out of the shadows, got into the vehicle, which then drove 100 feet and parked. The music was cranked up and we could see the events unfolding in the SUV, so we turned our chairs the other way, tried to play it cool, and pretended all was well with the world. But, in a "I am tough" kind of way, LOL 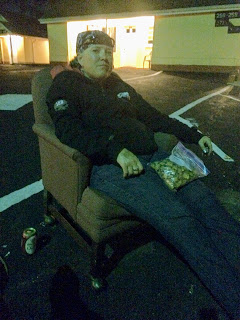 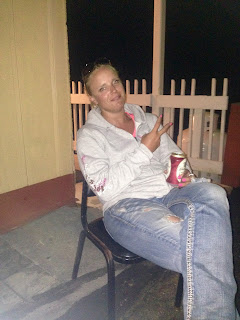 Just as we resettled into our chairs, the SUV was leaving, but another creature appeared from the shadows. Roughly 5'10", scrawny, scruffy, and with HUGE eyes, this guy introduced himself so fast I didn't realize he was talking at first, then scurried down the hall, which he did for the remainder of the night. Lap after lap through the shadows, around the building, and back past us. We decided after a few of his hot laps and nonsense jibberish, that it was time to head in and secure the place for a long night. 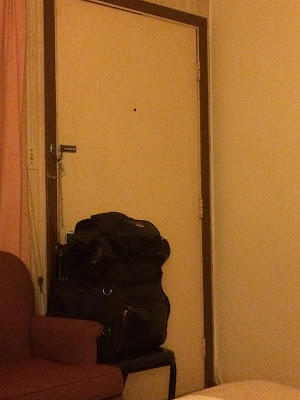 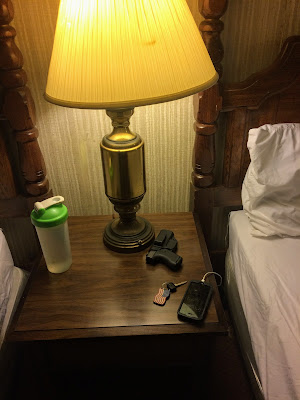 We slept, with all of our clothes on (my long sleeve shirt had a hole near the right elbow, which I thought nothing of at the time).. for fear of our skin touching whatever was in the bedding, and with one eye open. But first, we secured the place - with the necessities on the nightstand, our gear stacked up against the door, on top of a chair that was wedged under the doorknob, with a half broken chain lock attached primarily for decoration. And we hoped for the best... 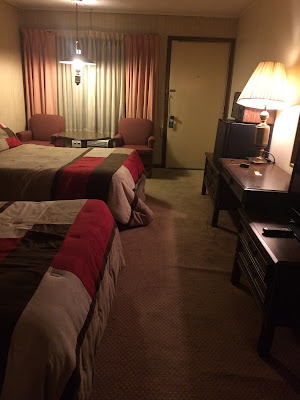 Had we researched, we would've seen the Trip Advisor comments, including (real comments) :
"Please for the love of all your worth, do not put yourself through such an experience.
Bates motel was luxurious compared to this place," - A Real TripAdvisor Review (wish I would've seen that BEFORE booking)
"The room was musty at first but after running the ac was better"
"Sleeping in a gutter would be cleaner and better"


"Shabby, musty and not too clean but friendly owner"
"I had slept in a tent for the four previous nights in a campground and would consider this inn to have far more unsanitary conditions 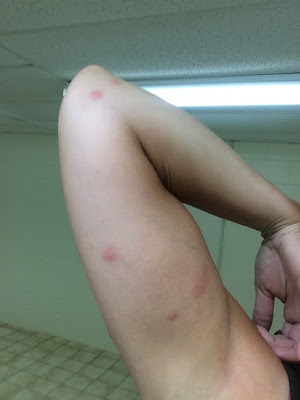 By daylight, it doesn't do justice for last night's events... 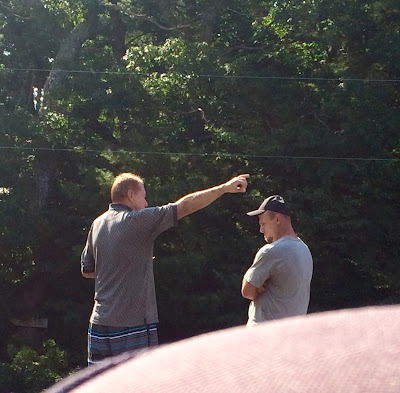