In Iowa, Christmas Trees are meant for shower decorations...😂😂😅😅😅

- July 31, 2019
I have to start by saying.. I will likely NEVER act my age. I will forever be in my mid to upper 20's... and I will also be the first to say it!!! Adventure, riding, random roads, and the roads less traveled the better! You know how sometimes the least planned things are the most fun? My roomie was due to get her knee replaced, so naturally, on the LAST old knee weekend, it called for shenanigans! IF they are gonna take out a knee, might as well completely wreck it. So late Thursday night we were bs'ing about what she wanted to do for her last weekend of the old knee. My ideas were almost identical to hers - together our concrete list included:
1.) Going out of town somewhere
2.) Finding warm sunshine
3.) Riding the motorcycle (if a backrest was part of the deal)

I texted a friend asking to use the backrest, she replied YES, and asked why. I gave her the rundown of our idea (VERY brief!) and she said she was IN! OK. That confirmed the three things on the list. But because it was now midnight on Thursday and we all had to work the next day, we left it at that and came back to the discussion Friday morning. I told my friend I would swing by for the backrest on my break. We all agreed we could be done working at noon. So when I showed up at her house for my 10am break, I was surprised to see that she was literally packed and ready to go. We congregated at my house so that I could (start/finish) packing and figure out a destination. 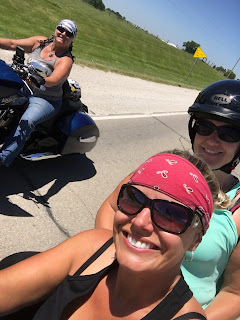 The sunshine was warming up quickly and we were eager to roll out. After checking weather/radar/Midwest maps.. we had three options for staying in warm sunshine: MN, IA, SD.  South Dakota is a long ride to get to the funnest parts... MN was not in the parameters of our plans... so Iowa it was. My roomie has ridden on the back of my bike a few times to the local pub... that's it. So when she said she wanted to ride on the back for the weekend... I was hesitant. I know how unfun the passenger seat can be for longer distances with GOOD knees... I was worried she would be miserable getting on and off the bike + sitting in one position for hours on end. After the fact, I am still impressed with her determination and willingness to keep going (Although she said we should go to Nashville and I quickly turned down that plan - we only had 2 days after all)! So we headed to Rochester where we met up for lunch with a good friend, bs'd longer than planned and at 4pm.. still had no real destination. 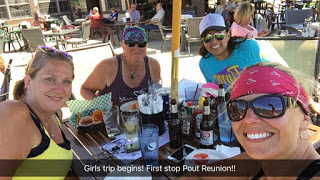 Sometimes a weekend comes along that is unplanned. I have mixed thoughts on these moments. On one hand, I always think "It sure would be nice to stay home this weekend and putz around/get stuff done/hang with people.." But then as those weekends approach, my brain switches to "I should really ride somewhere - after all, I have 2.5 days to go!!"  Rarely, if ever, does the whole staying home thing pan out. I just prefer to wander!!  While browsing social media, we were reminded of the Victory Rally in DeSoto IA. We checked the weather - ideal - sunny and 80's. Distance - also ideal at 4 hours from home, 3 hours from our current location. And so we went..south towards DeSoto. 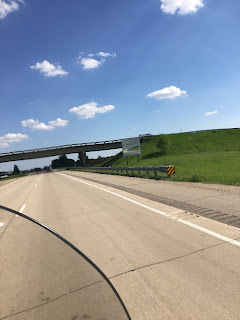 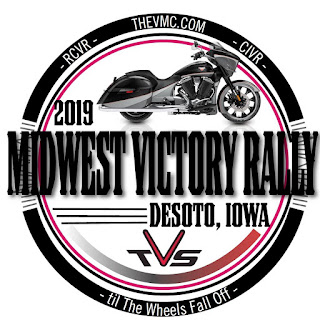 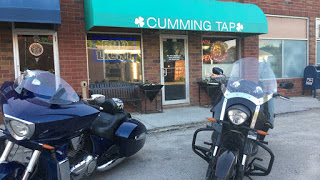 Turns out we all had crappy cell service.. so we asked where another biker bar was (thanks google) and off to Donna's Bar we went on the outer edge of Des Moines. Not knowing Des Moines at all, we felt like we might have been on the borderline edge of the wrong side of town, so to speak. There were pawn shops, money exchange places, and the like around the area..and my dad always said if you find yourself in an area with a pawn shop across from a money exchange place across from a liquor store across from a bail bondsman shop... You are in the wrong part of town. So, based on our surroundings, we were HALF in the wrong area. (There was no bail place that I could see). Anyways, the biker bars in Minneapolis are on borderline shady areas of town too, and they are still a lot of fun and filled with great people most of the time! So, as we pulled into Donna's - instead of parking like normal humans (carefully backing the bikes into the parking spot so that we could simply pull out....) we were too tired and hot to care and we pulled right in, facing the bar (GASP) and walked on in.  We could tell right away this was a locals bar - it didn't take the bartender too long to warm up to us though and soon we found ourselves outside at a picnic table bs'ing with locals and looking at lodging options. 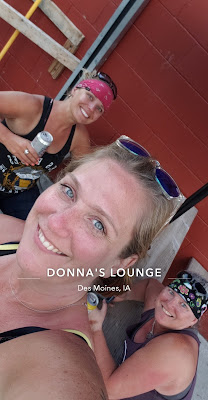 Turns out it was Pride weekend in Des Moines (DSM). This was not good for us as lodging was sparse and what was available nearby was expensive. In the meantime we saw on social media that folks from NE that we 'knew' through a Victory FB group were in town too - we messaged them and they ended up meeting us at Donna's bar. Before you know it, the Iowans we met just a couple weeks prior were also at Donna's Bar - turns out its one of their local hangouts. 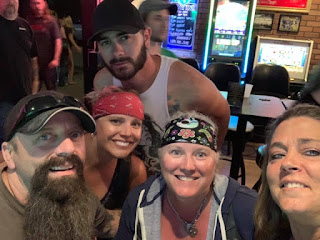 Soon, the day became night and we were still at a loss for lodging options. When we met the Iowans  in Arkansas a couple weeks prior, the one guy said he was in the process of putting in/finishing an in ground pool. Turns out, tonight was his POOL PARTY inauguration. The guys we met at Donna's asked if we wanted to go to the pool party - we didn't want to self invite, but we did, and off we went to the guys house. He likely had ZERO clue of what was about to happen/walk in.... after parking on his front lawn (literally) we walked around the house into the pool area. First the guys, then us... pretty sure it took the 3rd guy a few minutes to register what was happening.  So, there he was, just lounging with a couple of people and having a mellow evening. And then we walk in. One by one, we wound up in the pool. Some by choice, others not so much (me). Sure felt good after a long day of riding though!

By this point, it was midnight and being still homeless, the guys offered to put us up for the night. They might have said 'put up with us for the night', but I heard 'put us up for the night'. Pish posh. We walked to a local pub, listened to some singing, had a cocktail or two, and walked back to the house to pass out.  In the morning, the guys had to go to work. Poor souls. Who has to work on a Saturday when its sunny and 90 degrees? lol. The parting words were "Don't rob me". Pssh. We would never do such a thing. In fact, we all live on the golden rule of 'leaving things as you found them." So, we cleaned up after ourselves and were trying to find somewhere to have breakfast. 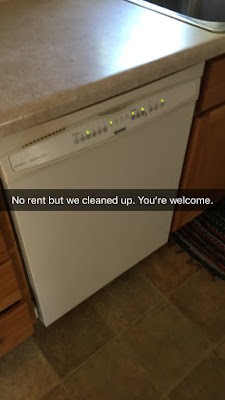 Upon loading the bikes, I spied the neighbors having a garage sale. In the middle of the driveway, which was in CLEAR view of where our bikes were parked, was a handmade pre-decorated CHRISTMAS tree sitting there. In passing, I said "We should buy that tree and leave it in the house for him..." and next thing I know, "one of the girls" was walking back towards the bikes/the house, with Christmas tree in hand. 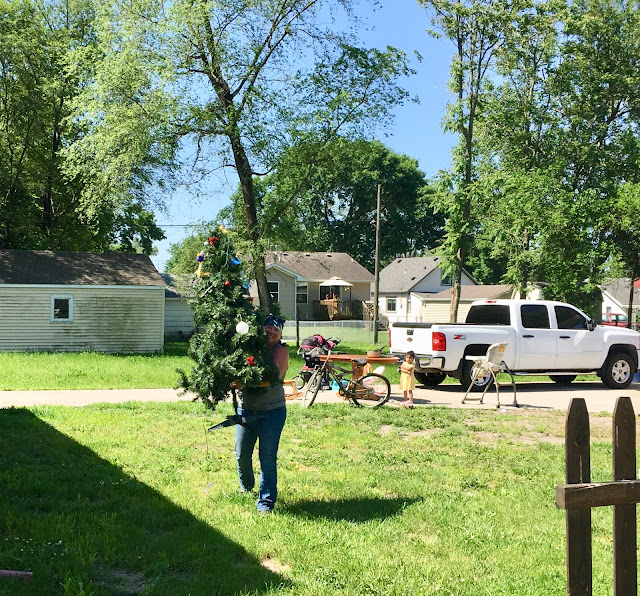 We all bust out laughing SOOO Hard!! Now, where to leave it? I quickly said "in the shower"! I don't know why this was sooooo funny, but it was! We all took turns getting it 'just right' - smack middle of the corner, glass surround shower. The tree alone was hilarious, but add in the handmade decorations, complete with signatures of the children who made them, it was also PRELIT! We plugged it in and shut off the lights admiring our funny-business.. but then decided to unplug the tree as part of the lights flickered with every movement. 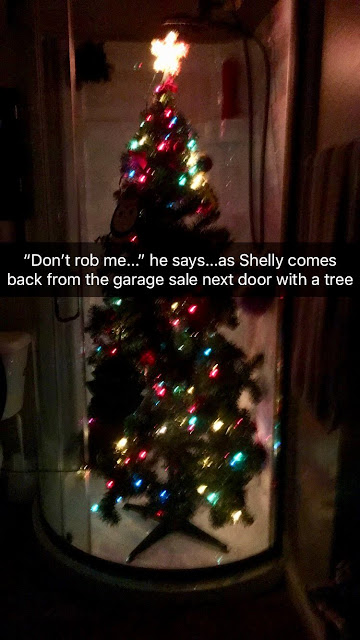 I mean, we wont rob anyone, we just like pulling pranks.. but we don't like burning peoples houses down who were kind enough to let us crash over! So against our wants, we unplugged the tree, made one final check to make sure it looked perfect,  and left the house standing with no risk of fire, as we saddled up and rode to breakfast. 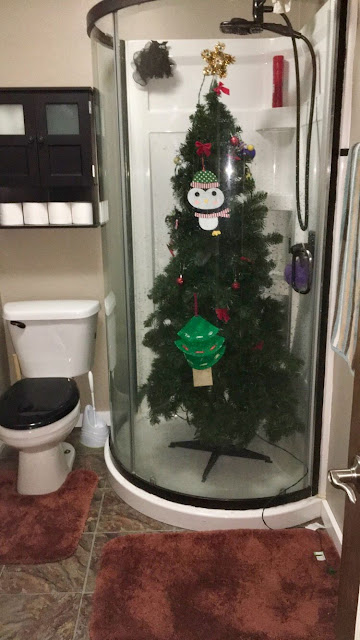 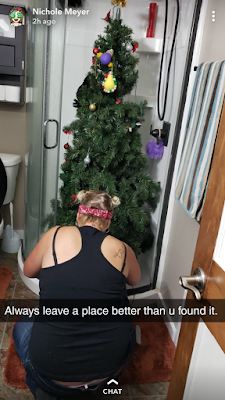 ALLL day we rode around and waited to hear the reaction of our GRAND idea.... hours and hours passed with no word. Then, suddenly, as we were mid-taco into dinner, my phone lit up repeatedly.. THis was it!!!!! We were dying in laughter just thinking of the reaction... first it was "You girls really cleaned my house?" Me: "Yes. That is how we roll! We are classy!"... waiting for the tree to be noticed... it was like waiting for paint to dry only way more fun.  And then! Bam!  A picture of the Christmas tree comes on the phone screen... with about a million questions. It went something like this....(actual messages below- the general idea went like this..)

"WTH?" Me: Why is there a Christmas tree in your shower?" (dying of laughter and nearly peeing myself as I type...) "Where did you get this?" Me: "But why do you have a tree in your shower" Where did you get it?? Me: I can carry a LOT on my bike. "So you had this all planned??" (Dying of laughter still.. and now tears were forming) We let this thought hang in the air for a bit... and then realized, but this time in the day, the garage sale was likely over. So he legit had ZERO idea of where a pre-decorated Christmas tree came from, nor why it was in the shower. This made it even funnier! He said he was going to throw it out..I suggested he give it to the neighbor girl (Thinking.. I don't want the poor neighbor girl, who is all of 9 years old, to see her decorated tree in the trash!!). "LOL"  Me: "No, really. I think she would like to have it." "You MET the neighbors?" Me: Kind of. And then we went on our way, laughing hysterically like school girls all night long. The next day brought more of the same questions.... and I finally had to cave.... #TeamWork 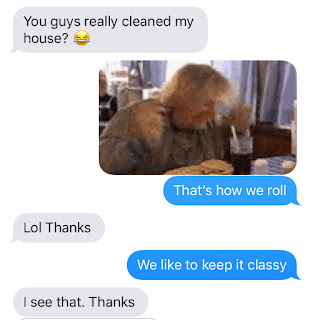 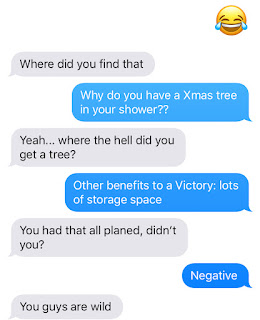 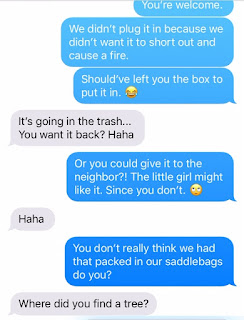 Finally, the next day I caved! 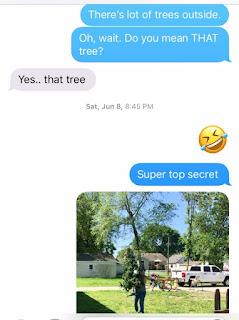 Pretty sure the Iowans will never offer us hospitality again LOL 😂😂😅😅😅