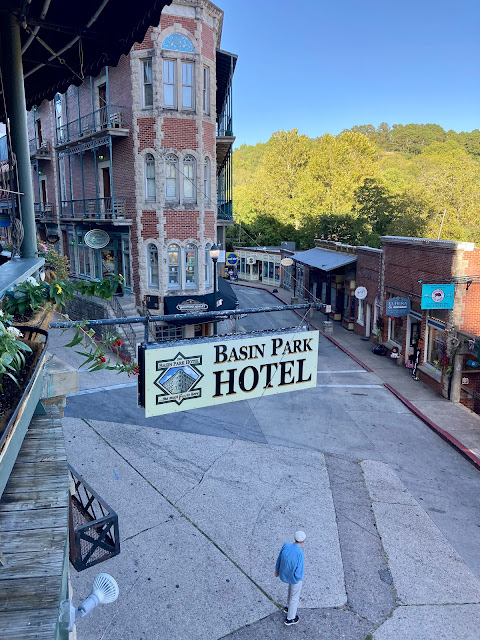 Arkansas is almost like a second home. I have been going there on 2 wheels since 2012 and I can never get enough of the scenery, the twisty roads, the expansive views, the down to earth people, and of course, there are always some shenanigans mixed in. This year, Bikes Blues & BBQ moved locations from Fayetteville, AR to Rogers, AR, and with it, came a new date, pushed back a couple of weeks. While I still ride a lot in October, the days get REAL short, the sunshine is mostly for looks, and the darkness creeps in much quicker - making riding around home a great option, but riding down to Arkansas a bit more of a chore (especially when I can still go earlier in the year and be WARM)! So, instead of heading down for BBBQ this year, as we always do, we decided to stick with the usual date just after mid September. Sadly, Sheila couldn't make it due to an adventure the previous week out west having an impact on her motorcycle's desire to come home and leave again so soon (clutch issues). It sure felt weird to leave her behind - September is our annual girls trip to Arkansas. None the less, Stiffy and I were the sole representatives this year. Every year I talk and talk and talk about seeing new stuff in the area - while I have been to AR 20+ times, there is still so much that I haven't seen. And surprisingly, some things are BIG tourist attractions that folks travel specifically to. We managed to see several new things this trip - and of course got a lot of fun riding in too. The Basin Park Hotel is well known for being haunted. The Basin Hotel opened in 1905 and sits on top of where a previous hotel once was - before it burned to the ground. Once rebuilt, it was the site of illegal liquor and some famous Prohibition guests like Al Capone's sister, who reportedly spent a month there back in the Prohibition day. The hotel is very popular and well known for being haunted and offering nightly ghost tours (that is also on the to do list for another day). It's a quirky place, with a restaurant offering a great view of downtown. Downtown is a site in itself - many of the buildings are made of limestone & brick, built into the rock and at a crazy downhill angle. Calf muscles and quads get an extra good workout anywhere we walk in this town! 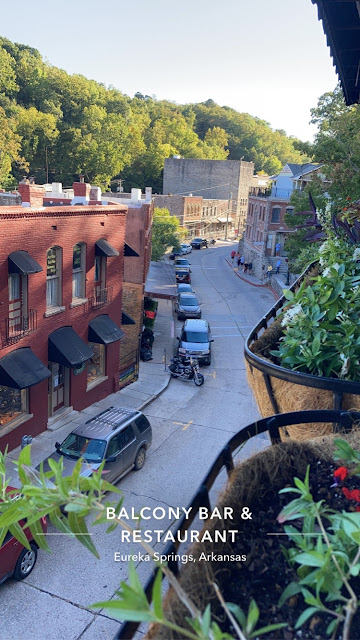 Our next, "Never before seen" stop was at the Thorncrown Chapel, built into a hill just outside of Eureka Springs. The Thorncrown Chapel was constructed in 1980 by a retired school teacher who wanted a chapel that could be a 'pilgrimage for meditation'. The chapel is 48 feet high, 24 feet wide, and 60 feet long. It has 425 windows and had some inspiration for design by Frank Lloyd Wright. The retired teacher used only elements that could be carried by 2 people, through the woods, which is where the church is located. The driveway of the church is on a very tight corner, and goes straight uphill - I started the trek in 2nd gear and quickly downshifted! The church is quite impressive and I can see why people go there JUST to see that church. 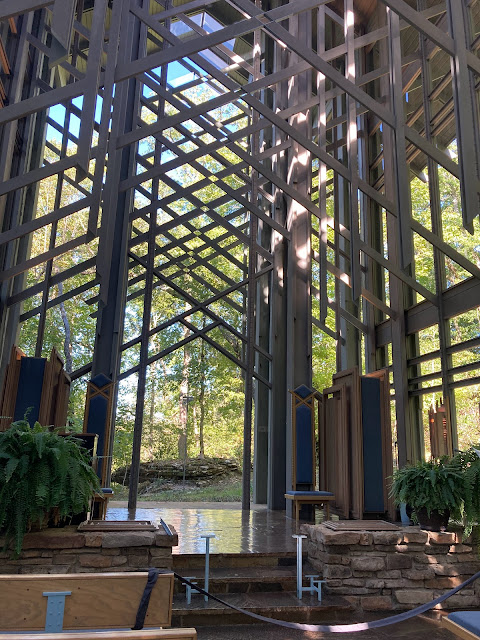 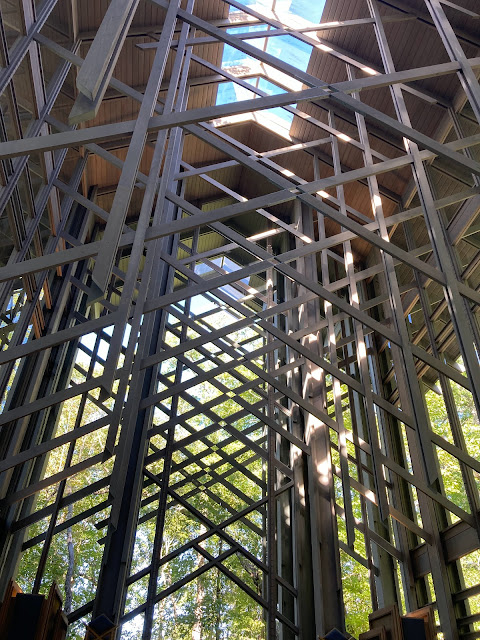 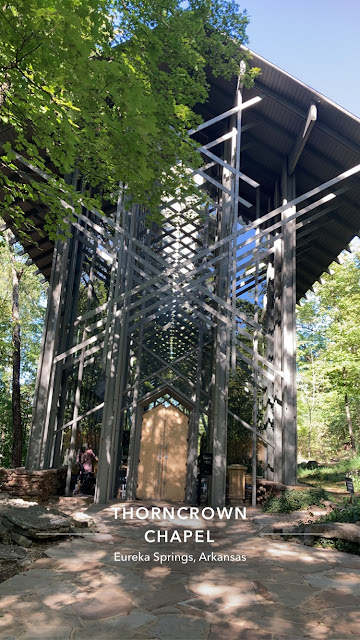 'The creepy rabbit.' This thing used to sit in a home's yard on our way out of or into town - tucked behind a fence, and under some trees lurking in the shadows - easily missed if one wasn't looking for it. I have always wanted to stop to look at the creepy thing, but since it was in the fenced in shadows of a private home's yard, with no shoulder of the road to stop on, there wasn't a chance to check it out. Until now! It has moved to the Martin Greer's Candy Store, where is it perched proudly out front on the lawn, with no fence around it. It's lost a bit of its creepiness being in the bright sunshine, but still, the thing is weird. But intriguing! 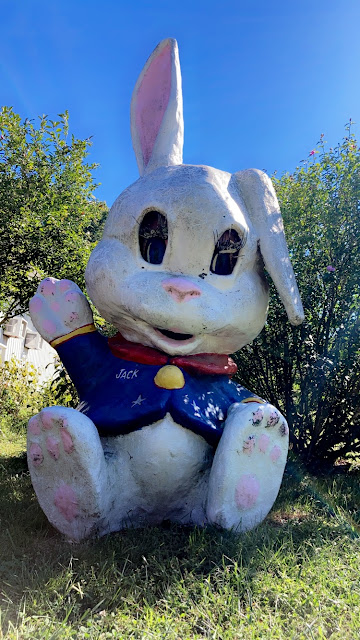 I certainly haven't been a 'foodie' around Arkansas - usually opting for something 'quick' in the morning so that time can be spent riding, not sitting around waiting to eat. And in evenings, I try to find a patio, preferably in the warm Arkansas sunshine to sit in. In the spirit of NEW, we went to the Mud Street Cafe. This place has a line out the door every year during the BBBQ. The atmosphere was cool from the start - walking from the cobblestone sidewalk into the door, there is a steep staircase down to the cafe, which sits in a cave-like atmosphere. There is a lot of history on the walls of the cafe - it was once level with (the old) Main Street, but due to how low the street was, and how close to Springs it was, it was notoriously muddy. After a fire in the town, they rebuilt Main Street, raising it up quite some distance to get it out of the water path of the springs, causing the storefronts that didn't burn,  which once had Main Street access, to now be in what is referred to as "Underground Eureka". 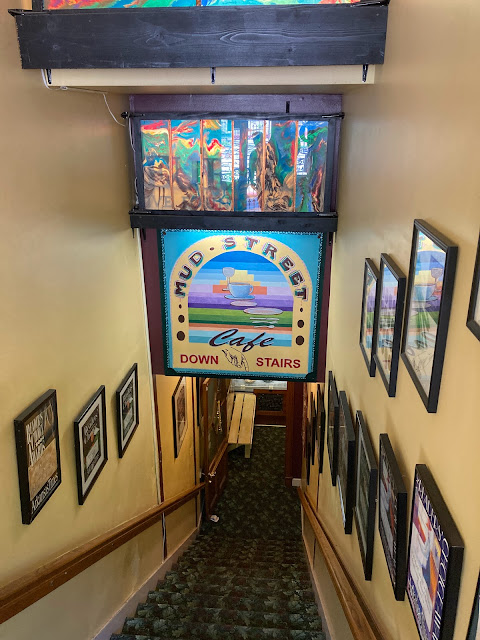 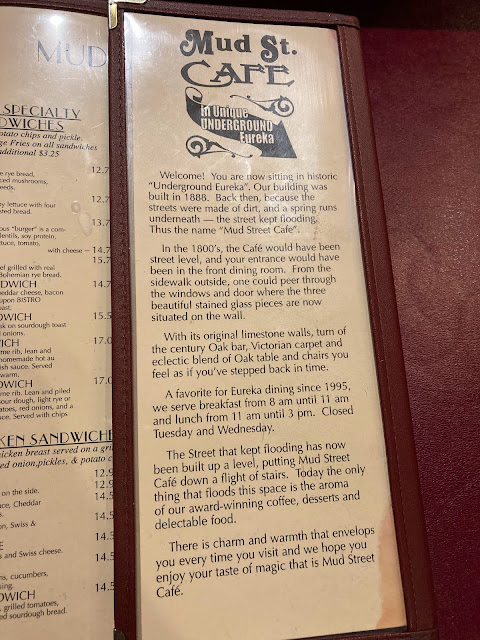 Eureka Springs was founded because of the natural springs located throughout the area. The waters in the springs were and are thought to have healing powers, drawing a lot of tourists to the springs alone. And yet, I/we had never officially stopped at any of the springs around the area (and there are TONS of them). And so we finally did! We dipped our hands in the crystal clear, very cold water pool formed in front of where the spring comes out of the earth - yet to be determined if we are healed of anything! 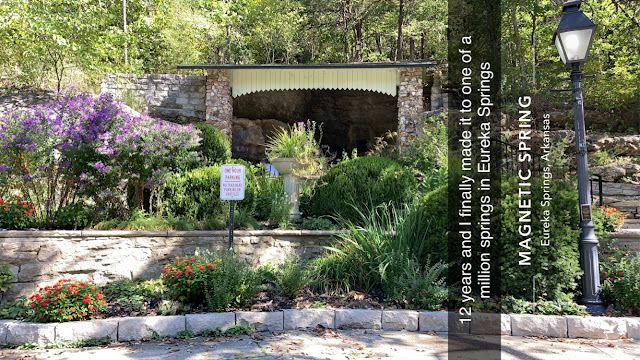 The Christ of the Ozarks statue  sits above Eureka Springs on the side of the mountain - and can be seen from quite a distance away. It was built by hand with no poured sections. It weighs over 2 MILLION pounds and is made of 24 layers of white mortar covering a steel frame that is welded into the mountain rock. The hands from wrist to fingertip measures 7', it's arm span is 65 feet wide and its 67' tall. The thing is HUGE. It sits on the grounds of the famed Passion Play, which is yet another thing I haven't done while in town. 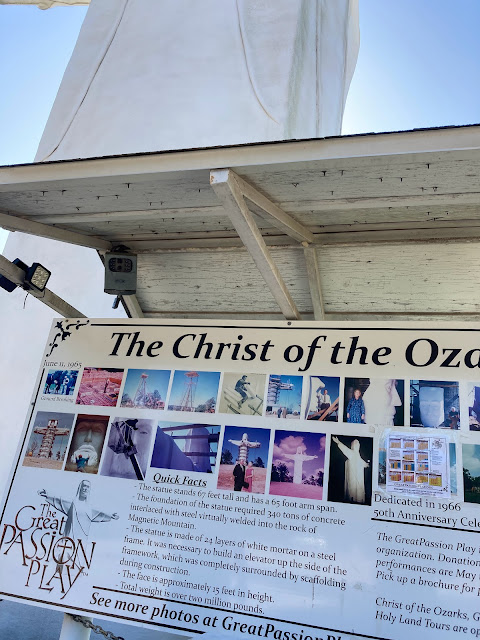 Note the birds atop it's head - they look tiny! 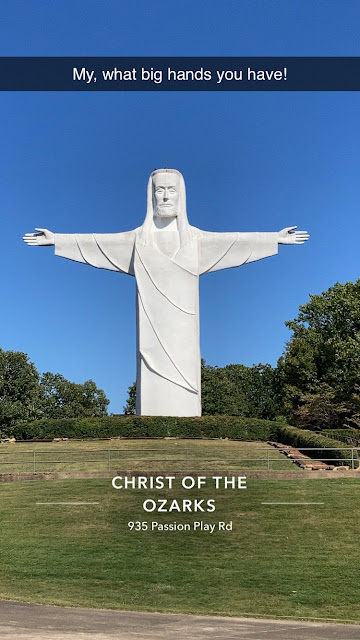 It was fun to see new things and go new places this time around. We knocked quite a few 'well known must see's' off the list, and yet, so many more are waiting to be explored! But, we can't be tourists all day when the roads are calling our names and corners are needing our presence! #ILoveArkansas 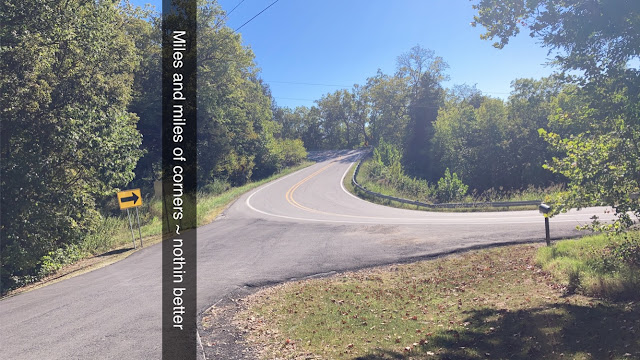