2 girls, 2 wheels & a Clutch cable roadside repair…done in minutes! A Victory/Indian must have!

https://savurride.com/ Mark this website in your favorites and you will thank yourself at a later date! It’s gonna happen…that moment when you are cruising at highway speeds, and you go to shift gears on your Victory motorcycle, but all you feel is zero resistance and the clutch lever just flops loosely as you desperately try to “get it to work”…all while also trying to figure out what’s happening, maintain an upright position, keep an eye on traffic around you, and then the terror strikes. You suddenly realize just how defenseless you are in that moment. And your next thought is realizing if you slow down to pull over, and you are in a higher gear, your bike will sputter and spit until it reaches an abrupt moment where it just can’t go on…and you will try your best to avoid tipping over as the engine dies in whatever gear it was last in. And then - literally whatever spot the engine stops, is precisely where you will be parked for the duration of the fix. That whole scenario takes roughly 30 seconds to play out in entirety! It feels like an hour. I was lucky, as I had 124,000 miles on my original clutch cable on my 2014 Victory Crossroads before it snapped near the shifter lever. I’d never cleaned, lubed, nor inspected my clutch cable. I didn’t know I had to. I just kept riding. Until I didn’t. Thankfully I was able to get mostly off the roadway before the bike jerked to a stop, and somehow I kept it upright. I had a Sav Ur Ride in my saddlebag as someone once told me clutch cables are notorious to break in Victory bikes within 50k. I dug out the worn, ripped, and tattered plastic bag and started reading the instructions. Terrified in the moment, yet determined to figure out how this works, It took 45 minutes of thinking and overthinking before a kind human stopped to help just as I was on the last step. I was trying to get the nut OFF the clutch cable box thing (yes, official term used), when in reality, I just had to loosen it, which I already did. Then, I loosened the bottom screw and simply pulled the broken cable out. Greased the new one, slid it in, and tightened the screw. It was literally that easy. And after I’d done it once, when Stiffy’s cable broke a few months later at 80k, she was back in action after only 24 minutes. The next time, on another bike, it only took 17 minutes. Now, I never leave home without a kit knowing that I may need it or I can help someone else along the road!!!

This is Stiffy’s experience - the second time her clutch cable snapped and she hopped the nearest curb. I was up ahead waiting for her- we have a 3 minute rule. We wait 3 mins before turning around to see if someone needs help. I could see her and as I checked my phone, she sent a message - it just said “help”. I turned my bike back around and couldn’t help but start laughing as I saw her park job. Her front wheel was up on a curb in a driveway area, the rear wheel still in the driveway, one leg was barely tip toe touching and the other was dangling in the air. She couldn’t reach to get her kickstand, her nerves were rapidly firing, and the terror in her face was palpable. She was just a hair too short and couldn’t reach the ground with both feet to get off her bike at that angle. So…she was forced to sit there while I laughed and took a picture before helping her, reassuring her, “You’ll laugh about this someday!” 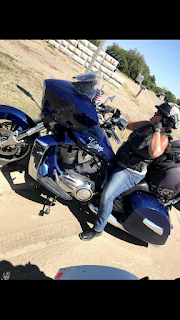 Side of the roadway fix in action! 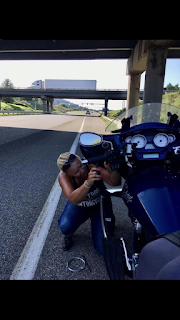 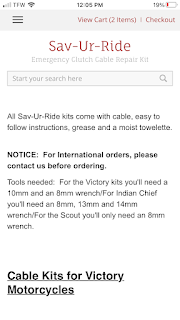 This group of bikes went by on the other side of the road. By the time they turns around and came back, the fix was done! They were all in disbelief that we could change a clutch cable on the side of the road….and that we DID just that! We talked about it for so long the local Trooper stopped to make sure all was ok. Stiffy and I pretty much felt like rockstars! 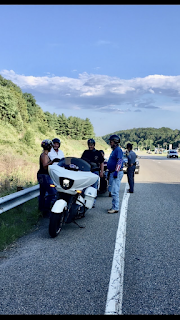 Read about my first experience at www.GypsyBikerChick.com 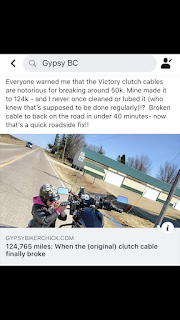 Stiffy was not happy but she learned quickly! 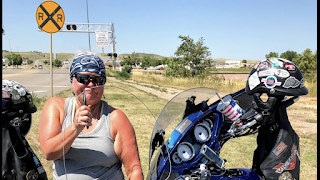 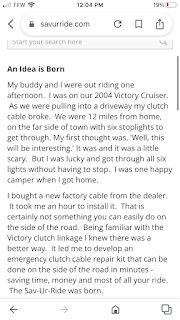