How many miles did you ride this year? Well, I went around the world and then some.... Literally 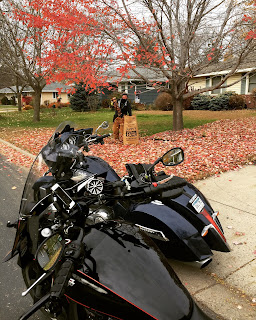 While I am hopeful that the riding season is NOT over yet, the brilliant white layer of ish on top of what was once magically green grass, limits my hope just slightly. Last weekend we rode over 100 miles on Saturday - granted, it was not HOT outside, with the right amount (4) layers, it was tolerable and rather enjoyable. Our destination was a local bike shop that was hosting a Mileage Competition in which several of the girls and I joined earlier this year (March). But instead of just 'ripping' the 25 or so miles to the bike shop, we took the longer, scenic route. Why hurry? I met my friend at her house and as I was pulling up, I saw her bike parked out front, and there was some random raking leaves in her front yard. She has a gorgeous (some kind of) leaf tree in front of her house that turns the brightest red every fall and I just love looking at it. She, on the other hand, despises said tree because it gives her daily gifts she has to clean up (leaves), which as she says "Interrupts riding season" because she instead has to adult in her front yard. But no fear, she too is a sucker for peer pressure and when its a decent-enough day in MN, we make the most of it! Oh yeah, said random that was raking her yard... that WAS her... she was bundled up for riding and confused at what task comes first, so as she was waiting for me to arrive, she was doing some adulting work and sweating profusely under all of those layers LOL 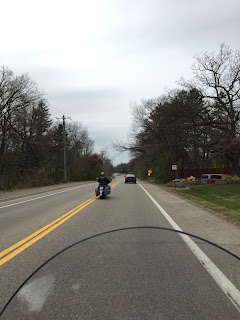 We roll out of her neighborhood and head west. Our end destination is south, but we wanted more than a 25 mile jaunt. We head west and take a bunch of 'city' roads that I had never taken before, even though I live in the general area. That's the beauty of the bike - I would never take 'longer than needed' to get to a destination in a car. But on the bike...every new road is a potential great road to ride! We meander west, then a bit south, then west, then suddenly I am kind of lost, yet not.  I recognize the Welcome to (city) sign, but cannot piece together how the heck we got there or what part of said city we are in. Again, the beauty of riding - sometimes I lead and sometimes I follow, and I usually learn something either way. We eventually make our way to the bike shop, just starting to get chilled from the days riding. There was one other bike parked out front of the shop, then us. We walk in to find an employee dusting the bikes and asking what we needed. Just then, the front desk chica walks up and immediately recognizes us, grabs the mileage sheets that we used when we both checked in in early March, and we head out to the bikes for our final check in. 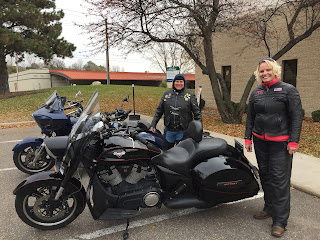 I went first, knowing my friend smoked me in miles - I clocked in at just over 27,000... she went crazy riding this year, and having made THE most out of her new bike, clocked in at just over 34,000!!! In ONE riding season - aka March to November 3rd. Between the two of us, we rode 61,000 miles. In 8 months. On motorcycles. That is crazy to think about!  We each circled the entire planet Earth and then back to the USA and then rode from Alaska to Key West. And then she rode all of the way back to MN. 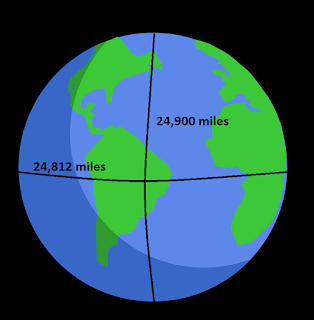 We took a couple of pics in front of our bikes, with our 20 layers on, looking like the Michelin Tire Man, and mosied on towards home. The sun is definitely losing strength these days and darkness sets in way too early. Of course, we didn't go STRAIGHT home, that is boring. We took a round about way. And that, sadly, was the last time I rode the bike... one week ago. Depressing. Because we woke up the next day to a fresh layer of ICK on the ground. 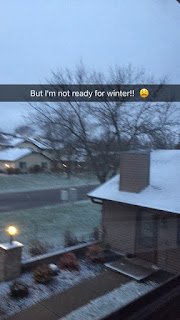 And its been coming down here and there ever since. While I am hopeful there will be 'just ONE more nice-ish day' to ride, I wont be holding my breath. I am out of shape and cant hold it that long. But, since I gassed up right as we got back into town, I can proudly say that this is the FIRST YEAR ever that I have parked the bike with a full tank of gas and stabil in it. Before the snow flew. Never fails, I always think there will be one more nice day, then there isn't one of those days, and I am riding the bike in the snow and freezing cold temps to get gas in her and park her for the winter. So here is to mother nature - hoping she gives us JUST ONE MORE RIDE before the season is truly over.